ABSTRACT: Diabetic foot ulcer is one of the leading causes of lower limb amputation and mortality in diabetic patients. Various factors contribute to the manifestation of chronic wounds in diabetic foot, but ischemia, infection, and elevated levels of matrix metalloproteases enzyme are the main factors. Matrix metalloproteases (MMPs) are elevated to as high as 60%. Thus, altering the wound-healing process. This could be substantially decreased by using tissue inhibitors of MMPs. This article focuses on the effects of tissue inhibitors of MMPs in treating diabetic foot ulcers and preventing lower limb amputation diabetic patients.

In the last few decades, diabetes mellitus has enormously taken humankind into its constant grip. It has increased from 30 million patients in 1985 to 285 million in 2010. According to International Diabetes Federation reports 463 million people were diagnosed worldwide with diabetes mellitus in 2019, which is estimated to grow up to 700 million in 2045 2. Diabetic Mellitus, a metabolic/lifestyle disorder, is increasing every minute at an alarming rate of many complications associated with it; foot ulceration is highly fatal and equally financially exhausting.

This research aimed to formulate a cheap and effective novel dosage form for its treatment. Diabetic foot ulcers (DFUs) are a common and most serious complication, with as many as 25% of the diabetic population having a lifetime risk of developing a foot ulcer 3. Its severity increases as the wound are infectious and non-healing, leading to lower limb amputation in some patients. It is the major source of morbidity and leading cause of hospitalization in diabetic patients 4. 5-24% of all DFU cases lead to lower limb amputations, 10-15% remain active while 60-80% get healed 5. DFU is one of the most common complications of diabetes of long duration. Neuropathy, ischemia, and delayed wound healing are the main cause of DFUs. Type 1 diabetes mellitus (T1DM) & Type 2 diabetes mellitus (T2DM) are equally prone to developing lower limb disorders in patients. An estimated 15% of patients with diabetes will develop a lower extremity ulcer during their disease. Skin is the largest organ covering 2m2 surface area, receiving about one-third of the total blood circulating throughout the body. It is the most accessible organ and prevents the body from the external environment. The stratum corneum, the outermost layer of skin, forms the barrier to percutaneous absorption of the drug through the skin. It is made up of dead, keratinized epidermal cells with a thickness of 10 micro-meters and acts as a barrier for the permeation of drugs 6. Drug administration through the skin can be utilized in topical drug delivery for skin diseases or for transdermal absorption of drugs in systemic circulation. Topical delivery of drugs provides an advantage of self-administration and hence a better alternative to oral route and a hypodermic needle. Film Forming Solution is a novel approach that tends to counter all the limitations conventional topical or transdermal dosage forms face. It is defined as non-solid dosage form that produces a film in situ, i.e., after application on the skin or any other body surface. These systems contain drugs and suitable excipients inside that vehicle, which when applied onto the skin, leaves a film of drugs & excipients after solvent evaporation. After application of formulation onto the skin, the solvent evaporates, leading to increased drug concentration reaching saturation level and even the possibility of reaching supersaturation level on the skin surface. This supersaturation level enhances drug flux through the skin and thus reduces the side effects or irritation 7.

Chemicals and Drugs: Doxycycline Hyclate was obtained from Comed Chemicals Ltd., Vadodara, as a gift sample. Chitosan and Polyvinyl Alcohol from Fischer Scientific, Mumbai. Acetic acid and Propylene Glycol were procured from a department research lab. All other reagents and chemicals were of analytical grade. Double distilled water was used throughout the experimental work.

Preparation of Doxycycline Film Forming Solution: 3% (w/v) chitosan solution was prepared in 1% (v/v) acetic acid by stirring using a mechanical stirrer at 1500 rpm for 6 hours. The resulting solution was passed through a cheesecloth to filter any undissolved chitosan present in the solution. 2% propylene glycol was added as a plasticizer and stirred continuously for another hour to mix uniformly. Doxycycline hyclate was added to 2% Polyvinyl Alcohol (PVA), which was prepared by heating PVA in distilled water at 70±10ºC. PVA solution containing doxycycline was added in equal volume and stirred for another hour to form the resulting solution.

Film Formation: The dried film patches were formed in a Petri dish. Film formation was evaluated and rated as complete and uniform, incomplete or non-uniform, with or without precipitation of the film-forming polymer. The cosmetic aspects of the film are given in terms of transparency or opaque, sticky or dry, peelable or non-peelable 8.

Film Flexibility: Film flexibility was evaluated based on cracking and skin fixation and was determined by stretching the skin in 2 to 3 different directions after being applied to the volunteer’s forearm.

Drying Time: For the evaluation of the drying time, the formulation was applied to the inner sides of the forearm of a volunteer. After a fixed period, a glass slide was placed on the film. If no liquid is visible on the glass slide after removal, the film is considered dry 9. If the liquid remains are visible on the glass slide, the experiment is repeated with an increase in drying time. A good film-forming solution (FFS) should have a minimum drying time to avoid long waiting times for the patient.

Stickiness: The stickiness of the film formed is determined by pressing cotton wool on the dry film with low pressure.

Depending on the quantity of cotton fibers retained by the film, the stickiness is rated high if there is a dense accumulation of fibers on the film, medium if there is a thin fiber layer on the film, and low if there is an occasional or no adherence of fibers. This evaluation parameter is essential, as the formulation should be non-sticky to avoid adherence to the patients’ clothes 10.

XRD Study: XRD study was performed to reveal solid state characteristics of the drug and drug-excipient mixtures. Two drug samples and a physical mixture of all solid excipients used in the formulation were prepared and evaluated. 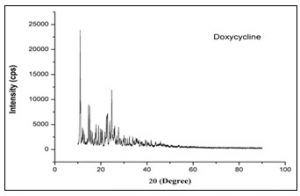 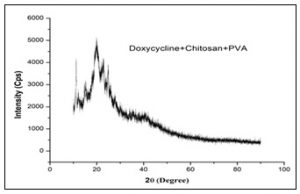 In-vitro Drug Release Study: In-vitro diffusion studies are used to predict the permeation characteristics of the drug in-vivo. Franz diffusion cell is used to determine the release profile of the drug from the film-forming system. The cell is made up of two compartments, the donor and the receiver compartment, between which the diffusion membrane is attached. The receptor compartments were filled with 20 ml of buffer mixture (pH 6.8) and maintained homogenous using a mechanical stirrer.

The temperature of the receptor compartment was maintained at 37±0.5°C throughout the experiment. FFS equivalent to 500 μg of DOX was applied to the skin. The samples were collected at a predetermined time interval ½, 1, 2, 3, 4, 5, 6, 7, 8, and 24 hours and replaced with the same amount of fresh medium. Samples were analyzed taken using UV Spectroscopic method at 276 nm 12. 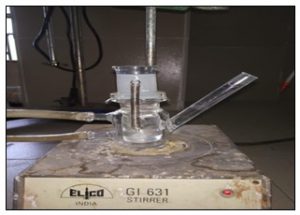 Film Formation: A uniform, continuous, complete film was formed after application on the volunteers’ forearm. No drug precipitate was observed on the outer layer. The film formed was opaque and dry in nature in cosmetic consideration.

Film Flexibility: Flexibility of the film was checked by stretching the skin in 2 to 3 directions after application. No cracking or skin fixation of film was observed. Therefore, it can be concluded that film was flexible enough to allow patient’s movement in all direction without any restriction.

Drying Time: Optimized formulation showed very less drying time, which is the most desirable characteristic of FFS for better patient compliance. The average drying time was noted as 6±1 min.

Stickiness: Negligible fiber adherence was noted while pressing cotton wool on the dry film with low pressure. So, the film can be considered non-sticky. This is another essential parameter after film flexibility to avoid adherence to the patients’ clothes.

Viscosity: Viscosity was recorded using Brookfield Viscometer, spindle no. 63. It was measured to be 252 cps at 100 rpm. The FFS should possess optimum viscosity for better adherence onto the skin surface. 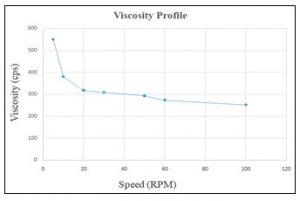 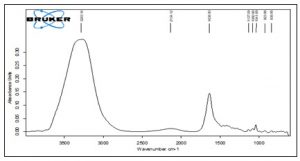 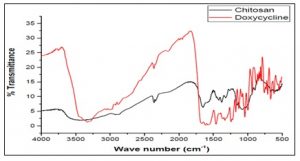 In-vitro Drug Release Study: In-vitro drug release study was done by Franz diffusion cell, and the % cumulative drug was calculated. 82.174% of the drug was released within 24 hrs. The graph shows an almost linear release of the drug. The percent drug release at different time intervals is shown in the graph below. 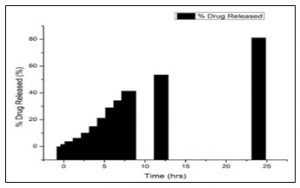 CONCLUSION: With reduced drying time, the topical film-forming solution of doxycycline offers a great prospect in wound healing in diabetic foot ulceration. Combining the inhibitory effect of Matrix metalloproteases and arresting wound infection with the help of an antibiotic (doxycycline) is an effective approach to prevent leg amputation in diabetic foot ulcers.