ABSTRACT: Objective: The persistence of this effort was to frame, evaluate and examine the impact of natural and semi-synthetic polymer in changing the release rates of matrix tablet loaded with diclofenac sodium. Materials and method: Matrix tablets of diclofenac sodium were made-up by varying the concentrations of both natural polymer i.e Guar gum and semi-synthetic polymer i.e HPMC K4M via straight compression method. Optimization of the tablet was completed by taking quantity of Guar gum and HPMC K4M in percentage as self-governing variable and cumulative percent of drug release at 2 hr, 6 hr and 12 hr as faithful variable using design expert Software. Optimized tablet was assessed for various pre and post compression limitations equated with marketed formulation. Drug release kinetics of the optimized tablet was evaluated by various representations of drug release kinetics. Result: The verdict of present investigation evidently designates that by using both natural and semi-synthetic polymer in a same tablet was given a noteworthy sustained release. The dissimilarity with the optimized formulation in software data and actual result is not diverge too much. Optimized formulation also screening talented result when linked with marketed formulation. Optimized tablet obeys zero order drug release kinetics. Conclusion: It was settled that blend of these natural and semi-synthetic polymer having auspicious effects on sustained release outline of drug from the matrix tablet laden with diclofenac sodium.

INTRODUCTION: The comfort of administration and the flexibility of sustained release dosage forms have been long documented in the pharma-ceutical art 1, 2. Seeing the number of creations and processing variables 3 - 6, sustained release matrix tablets made-up by direct compression are the humblest and the most striking from a formulation and process development viewpoint; so, they are most commonly used expertise in controlled release dosage forms.

Sustained release dosage forms that release medication in a pH independent manner are measured to be of precise value in the area of drug delivery. Such dosage forms offer the budding benefit of reduced unpredictability of bioavailability of drugs that can result from the necessity of drug release in-vivo on the variable pH of the gastro-intestinal tract 7 - 9.

Semi-synthetic polymer such as HPMC K4M is essentially the cellulose imitative; which satisfy the key criteria of release pattern by swelling property. HPMC has molecular weight 10,000 - 1,5000,000. Natural hydrophobic polymer guar gum abridged the degree and extent of drug release owing to reduced porosity of matrix. Guar gum also recognized as guaran, is a material made from guar beans. Chemically it is a polysaccharide collected sugars of galactose and mannose. Guar gum has density 0.8-1.0 g/ml and acidity 5-7 with molecular weight 50,000-8,000,000.Both HPMC K4M and guar gums are cellulose polymer based matrix which forms hydrogel due to real-time immigration to the matrix 10.

Diclofenac sodium (2-[2, 6-dichlorophenyl) amino] phenyl) is an aryl acetic acid derivative having a non-selective COX inhibitor activity and sparingly water soluble drug. It is a non steroidal anti-inflammatory, antipyretic analgesic and also hired for long term handling of rheumatoid arthritis, osteoarthritis and further painful and inflammatory circumstances. It has a plasma half life of around 1.5 hrs which necessities frequent dosing.

The most worrying side effects are gastrointestinal distress and are dose associated. The dose of diclofenac sodium in adult persons is 100-300 mg/day. The sustained release dosage form is thus required to progress the bioavailability of drug, reduce the harshness of side effects and improve the patient obedience by giving the drug on once or twice daily basis 11.

Here after, the contemporary study has been commenced to formulate, evaluate and examine the effect of natural and synthetic polymer in adjusting the release rates of matrix tablet loaded with diclofenac sodium.

MATERIALS AND METHODS: The model drugs diclofenac sodium was established from Girijananda Chowdhury Institute of Pharmaceutical Science (GIPS), Guwahati, India. All other elements such as HPMC K4M, Guar gum, lactose, magnesium stearate and talc were obtained from GIPS storage. All components used were of analytical grade.

Bulk density: It is a proportion of Bulk mass and Bulk Volume is known as Bulk Density. Quantity of powder is weighed distinctly and transferred into 100 ml of measuring cylinder, initial volume of powder material is restrained and designed bulk density giving to following formula.

Tapped Density:  It is a proportion of bulk mass and tapped volume is known as tapped density. Tapped density is significant evaluation parameter is resolute by placing a graduated cylinder containing a known mass of powder undertakes tapping in manually (100 tapes) as well as using a motorized apparatus under powder bed capacity has reached a lowest volume. The tapped density is calculated by succeeding formula.

Carr’s Index is less than or equal to 10 indicates poor flowing Properties.

Hausner’s ratio: It is a secondary index of ease of computing of powder flow. Lower Hausner’s ratio (<1.25) indicates improved flow properties than higher ones (>1.25).

Friability (%F): 20 tablets from each bunch were chosen arbitrarily and weighed. These pre weighted tablets were subjected to friability testing utilizing Roche friabilator for 100 upsets.

The tablet to the consolidated impact of scraped area and stun in a plastic chamber rotating at 25 rpm and dropping a tablet at tallness of 6 creeps in every insurgency. Tablets were evacuated, de-tidied and weighed once more. Following recipe was utilized to ascertain the friability.

Weight Variation: Weight variety: Weight variety was ascertained according to technique descried in USP. 20 tablets were weighed independently and the normal weight is computed. The necessities are met if the weights of not more than 2 of tablets vary by more than the rate recorded in Table 3 and no tablets contrast in weight by more than twofold that rate.

Assay: Drug substance of the supported discharge tablet was ascertained utilizing UV Spectro-photometer. Measuring tablet powder comparable to 50 mg of diclofenac sodium. Therefore joined into 100.0 ml of volumetric jar and broke up with 0.1 N NaOH. At that point separated and disposed of the initial 10 ml of filtrate. The filtrate pipetted 2.0 ml and after that additional to the 100.0 ml volumetric carafe with 0.1 N NaOH. Measured the wavelength of most extreme absorbance (λ 276 nm). The tablet was qualified on the off chance that it contained diclofenac sodium from 95.0 to 105.0% of that expressed on the name.

In-vitro Sedate Discharge/ Disintegration Contem- plates:  The tablet tests were subjected to in-vitro disintegration ponders utilizing USP Type II disintegration mechanical assembly at 37 ± 2°C and 50 rpm speed. According to the official suggestion of USFDA, 900 ml of 7.4 Phosphate Buffer was utilized as disintegration medium. Aliquot equivalent to 10 ml was pulled back at particular time interims and the disintegration media volume was complimented with crisp and equivalent volume of 7.4 Phosphate Buffer. The aliquots were separated and checked with proper weakening and measure of diclofenac sodium discharged from the tablet tests was resolved spectrophotometrically at a wavelength of 276 nm by contrasting and the standard adjustment bend 18.

Preformulation Studies (DSC and FTIR Study): The crests of diclofenac sodium are not modification meaningfully. So here is no drug excipients communication Fig. 1 and 2.

Pre-compression Parameters: Every one of the tablets were set up by dry granulation technique from Formulations F1 to F9, by taking distinctive extents of the fixings. In every one of the definitions, 100 mg of diclofenac sodium was consolidated and last weight was made up to 400 mg. The organizations of the considerable number of definitions was given in Table 2. 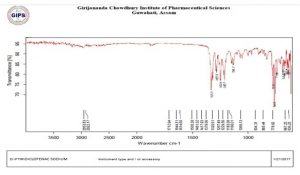 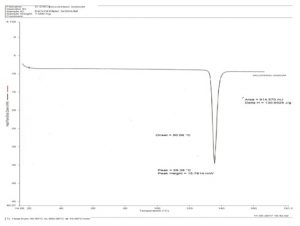 The Carr's list esteems and Hausner's proportion esteems were extended from 13.34-15.07 and 1.16-1.18 individually. The outcomes are appeared in Table 4. The standards of bulk density ranged from 19.00-31.00 g/ml and the values of tapped density choice since 22.00-36.66 were originate to be inside the restrictions as per USP. Tablets of entirely the formulations were exposed to many in-process estimation limits such as physical appearance, content uniformity, weight variation, hardness, friability and drug release tests are shown in the Table 5.

Post Compression Evaluation: Every one of the tablets was round fit as a fiddle with no un-mistakable breaks and having smooth appearance. The normal rate weight variety of 20 tablets from the normal was stayed inside ± 0.1%. Subsequently weight variety test uncovered that the tablets were inside the scope of pharmacopeia confine.  Medication substance of all clusters of tablets were inside the scope of 98.2 to 99.8 % demonstrating great consistency among various plans of the tablets. Every one of the definitions indicated sensibly great hardness esteems went from 4.46-4.56 kg/cm2. The rate weight reduction of the considerable number of definitions was under 0.8 %. This shows every one of the tablets withstand the mechanical stuns amid taking care of.  Among every one of the Formulations; F6 indicated greatest medication arrival of 97 ± 0.04% appeared in the Table 6.

In choice of improved detailing combined % of medication discharge versus time was considered and that plan F6 has demonstrated the most maintained and finish discharged portrayed for longer timeframe up to the 16 hour appeared in the Table 6.

By looking at discharged profile energy of the advanced definition F6 with promoted plan it was seen that the improved detailing has preferred managed profile over showcased plan appeared in the diagram.

The various model of drug release were figure out from Fig. 3, 4, 5 and 6 and it clearly indicated that it obeyed zero order kinetics. When % cumulative drug release of prepared formulation were compared with marketed product it showed that the formulation F6 had better drug release profile then marketed one Fig. 7. 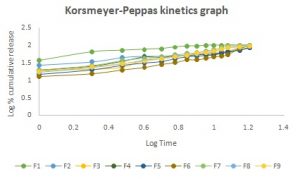 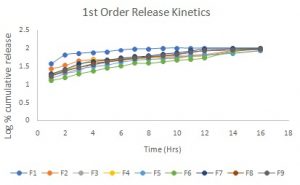 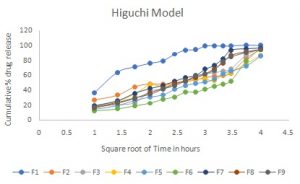 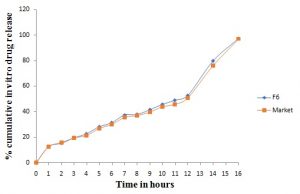 CONCLUSION: From the above examination, it was evaluated that the semi-synthetic polymer display discharge over a long stretch. Normal polymers have more discharge retardant property than semi-manufactured polymer. Accessibility of adequate time for swelling and gelling was in charge of the moderate arrival of medication. The thickness of HPMC K4M was more than the guar gum so; it was demonstrating better outcome in framework tablet. Furthermore, the hydration rate of HPMC relies upon the idea of the substituents like hydroxy-propyl a mass content.

Thus, HPMC K4M was shaped a solid thick gel in contact with fluid media which might be valuable in controlled conveyance of medication than normal polymer. At long last it was settled that mix of these regular and semi-manufactured polymer affecting supported discharge blueprint of medication from the network tablet weighed down with diclofenac sodium.

ACKNOWLEDGEMENT: The authors are thankful to the Department of Pharmaceutics, Girijananda Chowdhury Institute of Pharmaceutical Science, Guwahati, for providing us necessary testing facilities.