ABSTRACT: The objective of present study was to preclude of poor dissolution of relatively water insoluble and poorly permeable drug by formulating gastroretentive floating tablet using solid dispersion (SD) of the drug. It aimed to increase the drug solubility and gastric retention of the drug for better absorption profile. Cefpodoxime proxetil is an orally absorbed third generation cephalosporin antibiotic. The oral bioavailability and biological half life is 50% and 2.09 to 2.84 hrs respectively. Two grades of Polyethylene glycol (PEG); PEG 4000 and PEG 6000 in combination were used for the formulation of solid dispersion. Formulation batch SD8 was found to be optimized according to the face centred cube design (FCCD). Solubility and the drug release from batch SD8 was maximum in 0.1N HCL, 18.93mg/ml and 94.66% respectively as compared to physical mixtures (PM) and pure drug. The physical mixture having same carrier ratio (PEG 4000+PEG 6000) that is PM8 has solubility and drug release 13.93mg/ml and 76.34% respectively. The study showed that solubility and drug release has linear relationship with PEG concentration. The optimized batch of the SD was further used for the formulation of the gastroretentive floating tablets by using HPMC K15 M as the hydrophilic polymer and sodium bicarbonate as gas generating agent. The gastroretentive floating tablets was formulated by direct compression method and tested for various physicochemical parameters for tablets like tablet weight variation, thickness, hardness, friability, content uniformity, in vitro buoyancy studies, swelling index and in vitro drug release.

Many organisms which are resistant to penicillins and cephalosporins may be susceptible to cefpodoxime due to production of beta-lactamase by them. CP is widely used for respiratory tract infections, effective against tonsillitis, pharyngotonsillitis, acute bronchitis, urinary tract infection. CP (pKa 3.2), exists predominantly in ionic form at intestinal pH and with poor permeability and practically insoluble in water. The aqueous solubility of the drug is 400µg/ml (BCS Class IV drugs).Solid dispersions are the best way to improve the solubility and dissolution rate of the drug. It is stable and well absorbed within pH range 1-4, above 4 it undergoes hydrolysis to form active cefpodoxime but its active form not absorbed from gastrointestinal tract. So bioavailability of CP may be increased by reducing its hydrolysis. The half-life of CP (2-3 hr) suggests that it is rationale drug for sustained drug delivery.Chiou and Reigelman defined solid dispersion as “a dispersion involving the formation of eutectic mixture of drugs with water soluble carriers by melting of their physical mixtures”. In this method one or more active ingredients dispersed in an inert matrix at solid stage to alter their physical properties and to enhance the release of drugs from ointment, suppository bases, to improve solubility, stability, to increase dissolution rate and sustained release of drug 1. To prolong the gastric residence time from solid dispersions of CP floating tablets formulated by direct compression method. Floating drug delivery system (FDDS) remain buoyant in the stomach without affecting gastric emptying rate for a prolonged time  because this system have a bulk density less than gastric fluids 2. After release of drug, the rest of the system is emptied from the stomach this result in an increased gastric retention time (GRT).

Experimental Design: The statistical strategy for detailed experiment planned in such a way that the required information is obtained as efficiently and precisely as possible. The commonly employed designs for response surface methodology, screening and factor- influencing studies in pharmaceutical product development are: Factorial designs (FD), Fractional factorial designs (FFD), Box-Burman designs, Central Composite Designs(CCD), etc. 3 These are most commonly employed for nonlinear responses requiring second order models. CCD is also known as Box- Wilson design. The ‘composite design’ contains embedded(2k) FD or (2k-r ) FFD, augmented with a group of star points (2R) and a central point 4, 5. A face centred cube design(FCCD) result when both factorial and star points in a CCD possess same positive and negative distance from centre.

Two independent variables, the amount of PEG 6000(X1) and PEG 4000(X2) were studied at 3 levels each and the central point (0, 0) was studied at quintuplicate. All other formulation and processing variables were kept invariant throughout the study.

TABLE 1: FACTORS COMBINATIONS AS PER THE CHOSEN EXPERIMENTAL DESIGN

TABLE 2: THE AMOUNT OF FACTOR X1 SELECTED FOR OPTIMIZATION IN DIFFERENT LEVELS

TABLE 3: THE AMOUNT OF FACTOR X2 SELECTED FOR OPTOMIZATION IN DIFFERENT LEVELS

Physical mixture of CP with the combination of PEG 4000 and PEG 6000 in different ratios obtained from design expert were prepared by weighing accurate quantity of drug and carrier in pestle and mortar. These were mixed thoroughly for 5 min and sieved through a 0.25 mm sieve (#60) and stored in a desiccators for 24 hrs and used for further studies.

The solid dispersions of CP and PEG (carrier) in different drug-to-carrier ratios were prepared by solvent evaporation method. 500 mg of drug was dissolved in 20 ml of methanol in a beaker; carrier was added and mixed to dissolve at 400 C on a heating mantle to get clear solution. Solvent was allowed to evaporate at room temperature until constant weight obtained for about 48 hrs. Prepared SD were crushed, pulverized and sifted through mesh no. 60 and stored in desiccators 6.

The percent drug content of each SD was determined as, powder equivalent to 10mg CP was dissolved in a minimum amount of methanol and the volume was made up to 100 ml using 0.1N HCL. The solution then filtered through Whattman filter paper, required dilution being made and the assay of drug content was done by using UV double beam spectrometer at 263 nm.

In-vitro dissolution studies of SD were carried out in USP type 2 dissolution apparatus with three replicates, the rotation speed of paddle was 75 rpm using 900ml of 0.1 N HCL as dissolution medium and the temperature maintained at 37±0.50C, 5 ml of sample was withdrawn at 5 min interval upto 1 hr, filtered the sample using 0.45 mm Whatman filter paper, and replaced with an equal volume of fresh medium to maintain constant volume. The samples were analysed by using UV/Visible spectrophotometer at 263nm 7. 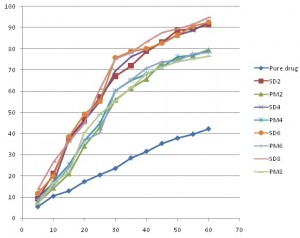 The dissolution curves CP, PM and SD are shown in above figures, proves that the solid dispersion technique has improved the dissolution rate of CP to a greater extent.

Preparation of Floating Tablets with and without Solid Dispersion:

Optimized batch of solid dispersion was further used for the formulation of floating tablets. HPMC K15M a water soluble polymer was selected as a hydrophilic matrix. The solid dispersion and all other ingredients were individually passed through sieve # 60 and mixed thoroughly by triturating up to 15 min. The powder mixture was lubricated with talc. Sodium bicarbonate used as a gas generating agent to decrease the floating lag time and HPMC K 15M used  to retard release rate to obtain prolonged release of the drug up to 8 hrs. The tablets prepared by using direct compression method.

TABLE 2: COMPOSITION OF DRUG AND POLYMER USED IN PREPARATION OF FLOATING TABLETS

Average weight of twenty randomly selected tablets from each batch was calculated. Then individual weight of each tablet was determined and compared with average weight. The mean ± standard deviation values of weight variation were calculated 8.

Thickness of three randomly selected tablets from each formulation was examined by using Vernier calliper and the mean ± standard deviation values were calculated 9.

Hardness of tablets was measured by using Pfizer type tester. Three tablets were taken from each formulation and average reading was noted 10.

Ten pre-weighed tablets were placed in Roche friabilator and operated for 4 min at 25 rpm. After that the tablets were dedusted and reweighed. The percentage friability of tablets was measured as per the following formula 9.

In-vitro buoyancy was determined by floating lag time by placing tablets were in a 100 ml beaker containing 0.1N HCL. The time required for the tablet to rise and float to the surface -on the surface of the medium was determined as the “total floating time”. The mean ± standard deviation values of buoyancy were calculated. 12

In vitro dissolution test was performed on USP type 2 test apparatus. The drug release study was carried out in 900 ml of 0.1 N HCL dissolution media, maintained at 37±5ºC and agitated at 50 rpm for 12 hrs. 5ml of sample were withdrawn periodically and filtered through whatman filter paper and the samples were replaced by equivalent volume of dissolution media. The absorbance of Cefpodoxime proxetil was measured at 263 nm by using UV/Visible spectrophotometrically 13. 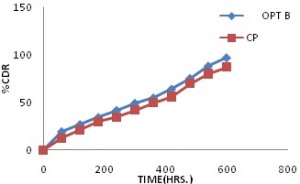 FIG.3: GRAPHICAL REPRESENTATION OF PERCENT CUMULATIVE DRUG RELEASE FROM TABLETS WITH SD AND WITHOUT SD 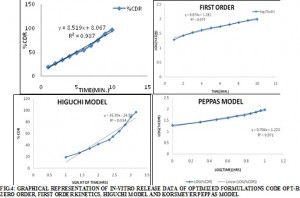 From the results of data fitting to various models, it was found that the optimized batch OPT-B showed zero order kinetics of drug release, i.e. mechanism followed for the drug release from the cefpodoxime proxetil floating tablets was Non- fickian diffusion as value of n is 0.74.