INTRODUCTION: Transdermal drug delivery systems (TDDS) is type of drug delivery system designed to deliver a therapeutically effective amount of drug across a patient’s skin. Typically, the Transdermal patches, stored in a pouch; at the time of use, the pouch is opened and patches applied to skin to releases the drug. The Transdermal patches, typically consists of a release liner (e.g. polyester), adhesive (e.g. polyisobutylene-based, acrylic, silicone-based), active pharmaceutical ingredient (i.e. drug), and backing (e.g. polyester). The system may also contain penetration enhancers, excipients, a rate-controlling membrane, and a protective film over the backing and over the release liner.

Transdermal route get advantage over conventional drug delivery system because it lowers the risk of toxicity or inefficacy in the case of drugs with narrow therapeutic window by providing the constant blood levels in plasma and also improves patient compliance by improving dosage regimens. In case of the drugs which have low bioavailability due to first-pass metabolism in the gastrointestinal tract and liver or short biological half-lives to be administered at most, once a day. The problems of the gastrointestinal environment, such as chemical degradation of the drug and gastric irritation, are avoided and drug input can be easily terminated by removing the patch from stratum corneum. Transdermal route is noninvasive alternative to subcutaneous, parenteral and intramuscular injections and suitable for patients who are unconscious or vomiting. Along with these advantages there are some limitations of transdermal route as there is possibility of local irritation, erythema, itching at the site of application and heavy drugs molecules (>500 Daltons) usually difficult to penetrate the stratum cornea. Also drugs with very low or high partition coefficient fail to reach blood circulation through skin and the drug candidate must have some desirable physicochemical properties for penetration through stratum corneum.

The transdermal patches of pure Salbutamol sulphate drug were made by solvent evaporating technique using different ratios of HPMC K15 M [6% TO 10 %] and PVP K30. 5 mg of pure Salbutamol sulphate was weighed and dispersed in 10 ml distilled water 8. Weighed amount of HPMC K15 M and PVP K30 was added to each aqueous drug solution with continuous stirring to ensure uniform distribution. Weighed amount of permeation enhancer is added to the solution. Propylene glycol was used to protect the polymeric patches from brittleness upon storage. The dispersion was done using a magnetic stirrer providing constant stirring (500 rpm) at room temperature until clear solution is obtained. Polymeric solution (10ml) was poured onto a prepared cavity (circular dish of 57 mm² diameter & 8 mm depth) and dried at room temperature for 72 hr with an inverted funnel overhead to provide a uniform rate of evaporation. Formulated patches were put in a desiccator over anhydrous calcium chloride for 24 hr before the evaluation process to assure total hydration and to eliminate entrapped air. The patches were evaluated within one week from the date of casting.

The in vitro dissolution test was practiced using USP type 1 test apparatus. The drug release study was carried out for 9 hr in 900 ml of phosphate buffer pH 6.8 dissolution media, maintained at 37±0.5ºC and agitated at 50 rpm. Periodically 5 ml sample was withdrawn at regular intervals and filtered through filter paper and samples were replaced by its equivalent volume of dissolution media. The samples withdrawn were assayed spectrophotometrically at 263 nm using shimazdu spectrophotometer. The percentage cumulative drug release was figure out and amount of salbutamol sulphate released from patches was determined 5.

In vitro diffusion studies: The diffusion cell consists of two chambers, the receptor and the donor. The donor compartment is open at the top. The receptor compartment is enclosed by a water jacket for maintaining the temperature at 37±5ºC and is provided with a sampling port. The cellophane membrane containing patch was mounted between donor and receptor compartment. Phosphate buffer of pH 7.4 act as diffusion medium stirred with magnetic bead (operated by a magnetic stirrer) to prevent the formation of concentrated drug solution just below the membrane. Samples from the receptor compartment were taken at various time intervals over a period of 24 hr and the concentration of the drug was determined by UV spectrophotometer method using the standard curve. The amount of drug diffused at various time intervals was calculated and plotted against time 6.

The skin irritation test for drug was done on healthy rat weighing in between 150-200 g. The optimized transdermal patch formulation was evaluated for skin irritation studies on 12 rats (in two groups and each group having 6 rats).  Dorsal portion hair removed physically with the help of sharp scissors and the skin was washed properly one day before use. Group one was supplied with medicated formulation and group second were supplied with control formulation. Patches with drug was secured on experimental side by using an adhesive tape and non-medicated patch to control side of rats. The patches were removed after 72 hours and each of the area was observed for any sign of erythema or edema 5, 6.

To provide the evidence on the quality of a drug substance which changes with time under the effect of variety of environmental factor such as temperature, humidity and light accelerated stability studies was performed. The optimized formulation was sealed in an aluminium foil and stored at 30±2ºC, RH 65±5% for 2 month as per ICH guidelines. Patches were periodically removed and evaluated 5.

The prepared transdermal patches and is quality control tests as per Indian Pharmacopoeia reveal that all the patches are meeting the official pharmacopeial requirements.

Rate of release was higher in patches containing high conc. of HPMC and penetration enhancer, it may involve a faster mode of diffusion of drug from the formulation.

Batch F5(93.20±0.085%) and Batch T5 (97.90±0.034%) showed highest cumulative drug permeated. So optimization studies were carried out on batches having penetration enhancer DMSO and tulsi oil and compared which one showed best results.

Optimization was done from software Design Expert version 9.0. The regression value for the optimized batch is higher with 1st order and therefore the release kinetics followed 1st order. R2 value is higher for First order and Higuchi. Hence, Salbutamol sulphate release from optimized batch followed is concentration and time dependent and penetration of drug from patches was governed by diffusion mechanism. 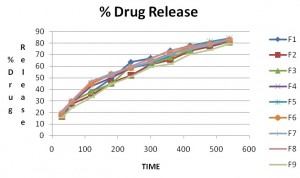 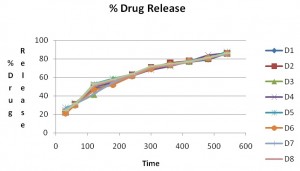 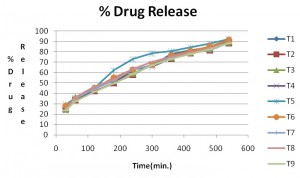 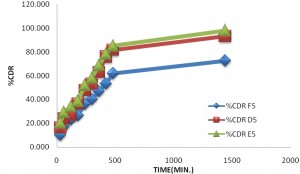