ABSTRACT: The aim of the work is to formulate sustained release matrix tablets of simvastatin and to optimize them using Response Surface Methodology. The tablets were prepared by direct compression method and evaluated as per pharmacopoeia methodology. A central composite design for 2 factors at 3 levels each was employed to systematically optimize drug release profile. Concentration of HPMC K15M (X1) and PVP K30 (X2) were taken as the independent variables and the in vitro dissolution (Y1), t50% (Y2) and mean dissolution time (Y3) as dependent variables. Response surface plots and contour plots were drawn, and the optimum formulations were selected by feasibility and grid searches. Both the polymers had a significant effect on drug release from the tablets. The formulations were followed Higuchi drug kinetics and diffusion was the prime mechanism of drug release. The polynomial mathematical models produce for various response variables using the regression analysis and were found to be statistically significant (P< 0.05). Optimization study was validated using 8 confirmatory runs, indicated very high degree of predictive ability of response surface methodology with mean percentage error 0.197 ± 0.017.The results of multiple linear regression analysis revealed that the sustained  release tablets can be prepared using an optimum concentration of HPMC K 15 and PVP K30. Contour plot is presented to represent graphically the effect of the independent variables on the dependent variables selected

INTRODUCTION:In the development of sustained release matrix tablets optimization of dosage form is an important factor. For optimization many statistical experimental designs have been recognized as useful technique.

As an important subject in the statistical design of experiments, the Response Surface Methodology(RSM) is a collection of mathematical and statistical techniques useful for the modeling and analysis of problems in which a response of interest is influenced by several variables and the objective is to optimize the response. It is a set of mathematical and statistical techniques for analysis designed to create a mathematical model to efficiently explore any variable. Response-surface methodology comprises a body of methods for exploring the optimum operating conditions through experimental methods 1-8. It is based on the principle of design of experiments (DoE). Different types of Response Surface methods include 3-level Factorial Design, Central Composite Design (CCD), Box- Behnken Design, and D- Optimal Design. The technique is very advantageous as it requires minimum experimentation and is very effective and cost effective 9.

Simvastatin (SIM) 1S,3R,7S,8S,8aR)-8-{2-[(2R,4R)-4-hydroxy-6-oxooxan-2-yl]ethyl}-3,7-dimethyl-1,2,3,7,8,8a-hexahydronaphthalen-1-yl 2,2-dimethylbutanoate is a crystalline compound, is practically insoluble in water and hence poorly absorbed from the GI tract. It is a potent and specific inhibitor of 3-hydroxy-3-methyl-glutaryl coenzyme A (HMG CoA) reductase, which catalyzes the reduction of HMG CoA to mevalonate.

Thus, simvastatin arrests a key step for cholesterol biosynthesis in the liver, and is hence widely used in the treatment of hypercholesterolemia and dyslipidemia, as an adjunct to diet. After oral administration, simvastatin is metabolized to its b-dihydroxy acid form (simvastatin acid) by the cytochrome-3A system in liver, where it inhibits the rate-limiting step in cholesterol biosynthesis. It is mainly indicated in the treatment of hypercholesterolemia.

The drug is also indicated in the treatment of atherosclerosis, atherosclerotic plaque etc. 10-13.

Hydroxy propyl methyl cellulose (HPMC) is widely used as a hydrophilic matrix base to prolong the release of the drug due to its rapid hydration, good compression properties, and gelling characteristics. Along with it is easily available and less toxic. It regulates the release of drug by controlling swelling and cross linking 14- 15.

FIG. 1: X-RAY DIFFRACTION PATTERN OF (A) SIMVASTATIN (B) INCLUSION COMPLEX OF SIMVASTATIN + β-CD

Preparation of Sustained Release Matrix Tablets of Simvastatin: Preparation of Sustained release matrix tablets was done by direct compression method. Table 1 enlists the composition of different sustained release formulations prepared using varying amounts of the polymers (i.e., HPMC K15M and PVP K30) and pearlitol SD200 as the diluent, along with the magnesium stearate, talc and aerosil as the lubricants.

Experimental Design: A CCD with α = 1 was employed as per the standard protocol. The amounts of HPMC (X1) and PVP K30 (X2) were selected as independent variables, studied at 3 levels each. The central point (0, 0) was studied in quintuplicate. Other formulations and processing variables were kept invariant throughout the study. Table 2 enlists an account of the 13 experimental runs studied, their factor combinations, and table 3 summarizes the translation of the coded levels to the experimental units employed during the study.

The % drug release at 24 hours, Time is taken to release 50% of the drug (t50%); Mean Dissolution Time (MDT) was taken as the response variables.

TABLE 2: FACTOR COMBINATION AS PER THE CHOSEN EXPERIMENTAL DESIGN

The percent drug content was determined as an average of three determinations. Weighed quantity of powder samples was diluted suitably and analyzed at 247nm for cumulative drug release using UV-Visible spectrophoto-meter 18.

The mixture was allowed to stand for 30 minutes with occasional shaking, centrifuged and a portion of the clear solution was used as the test solution. The absorbance was measured spectrophotometrically of the above test solution at about 247 nm and at 257 nm.

The amount of C25H38O5 dissolved was determined from the difference between the UV absorbance at the wavelength of maximum and minimum absorbance at about 247nm and 257 nm respectively 19.

Determination of t50%:The t50% is determined by plotting a graph between Cumulative % drug released and time. Calculation of Mean Dissolution Time (MDT) 20-22:The mean time for the drug to dissolve is called as the mean dissolution time.

n = no. of dissolution sampling times.

∆m = amount of simvastatin dissolved between times Ti and Ti-1.

TABLE 5: MODELING OF THE RESPONSES IN THE EXPERIMENTAL DESIGN 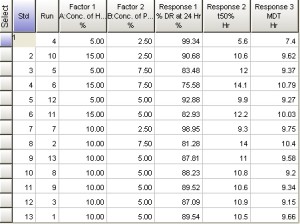 Based on the result obtained from this analysis and regression of statistically significant variables, statistical models were generated. Analysis of variance for the responses (ANOVA) indicated that assumed regression models were significant and valid for each of the responses. The results of analysis for each response variable were given below. From the equations it is clear that all the responses are strongly affected by the independent variables selected for the experiment. In polynomial equation the main effect terms (X1 & X2) represent the average results of changing one at a time from its low to high level.

Analysis of Data: The regression equations (eq. 2, 3, & 4) are presented in the form of contour plots and response surface plots in fig. 2 showing the influence of independent factors on responses. 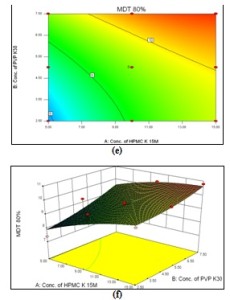 As it can be seen from the plots and also from regression equation, as the concentration of both the polymers were increased the % of drug released at 24 hours get decreased. Polymer HPMC K15M (X1) was used as a hydrophilic matrix forming agent because it forms a strong viscous gel on contact with aqueous media, which could be useful in sustaining the delivery of water soluble drugs (Inclusion complex of Simvastatin).

The formulations containing a relatively higher % of polymer showed less initial drug release due to the unavailability of drug molecules at the surface of the matrix.  Whereas when the concentration of both the polymers was increased t50% and MDT were getting increased. From the regression equations it's also clear that the second variable i.e. concentration of PVP K30 influences all the three  responses more as compared to first variable as the coefficient of X2 is greater than that of the X1 in all the cases.

A higher value of MDT indicates a more drug retarding ability and vice-versa. It was observed that the MDT values enhanced from 7.4 hours to 10.79 hours with the increase of both the polymers.

Validation and Optimization of the Formulation Parameters: To validate the model 8 check point formulations were prepared, evaluated for the responses and the experimental values obtained were compared with those predicted by the model. These plots (fig. 3a & b) are showing the desirable area or the optimum area for the two factors in which the required responses can be obtained.

The overlay graph (fig. 4) simply comprised of the contour plots from each response laid on top of each other.

In each contour plot, the undesirable area is grayed- out and the yellow colored area that remains defines the final optimal factor setting. This yellow area is called the sweet spots. 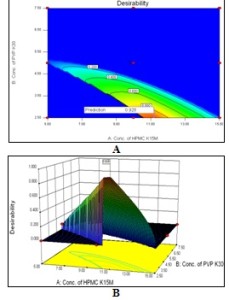 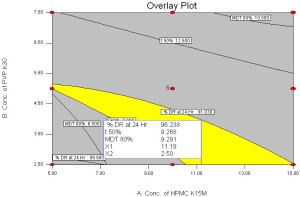 Validation of RSM Results: For all of the 8 checkpoint formulations, the results of the evaluation parameters were found to be within pharmacopeia limits.The check points compositions, their experimental and predicted values of all response variables, residuals and average % error in prognosis (Table 8). The linear correlation plots between the observed and predicted response variables, and the residual plots showing the scatter of the residuals versus observed values in Figure 5. Upon comparison of the observed responses with that of the anticipated responses, the average % error variance between -0.775 ± 0.015 to 0.197 ± 0.017.

The linear correlation plots drawn between the predicted and observed responses demonstrated high values of correlation coefficients (ranging between 0.906 to 0.993), indicated excellent goodness of fit. 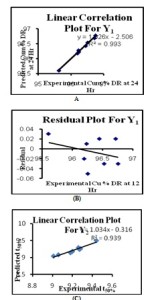 TABLE 8: COMPARISON OF EXPERIMENTAL AND PREDICTED VALUE FOR THE THREE RESPONSES OF CHECK POINT FORMULATIONS

Highest degree of prognosis obtained using RSM corroborates that a 2-factor CCD is quite efficient in optimizing drug delivery systems. The optimum amount obtained were 44.76 mg of HPMC K15M and 10 mg of PVP K30. From the FTIR study, it may be concluded that no interaction was occurring between the drug and the excipients. And from the XRD study, it can clearly see that the solubility and bioavailability of the drug was enhanced.