INTRODUCTION 1: Orally disintegrating tablets are similar to melts and are designed to disperse in the mouth and to be washed down with saliva. United States Food and Drug administration (FDA) defined ODT as “A solid dosage form containing medicinal substance or active ingredient which disintegrates rapidly usually within a matter of seconds when placed upon the tongue” 3. Over a decade, the demand for development of orally disintegrating tablets (ODTs) has enormously increased as it has significant impact on the patient compliance. Oral route of drug administration have wide acceptance up to 50-60% of total people experience inconvenience in swallowing conventional dosage forms such as tablets when water is not available, difficulty in swallowing the tablet (Dysphagia) which is a common phenomenon in all the age groups most commonly in pediatric, geriatric patients 4, 5, in the case of motion sickness (kinetosis) and sudden episodes of coughing during the common cold, allergic conditions and bronchitis­.  For these reasons, tablets that can rapidly dissolve or disintegrate in the oral cavity have attracted great deal of attention 6. Orally disintegrating tablets are not only indicated for people who have swallowing difficulties, but also are ideal for active people. The disintegration time for ODTs generally ranges from several seconds to about a minute. As will sub-lingual, buccal and melts, orally disintegrating tablets require an adequate amount of saliva production 7, 8.

Almotriptan is an extremely potent member of triptan class drugs which is widely used in in the treatment of migraine. It shows high bioavailability, rapid action with fewer side effects when compared to other drugs of the same class, but due to its bitter taste formulating it into an ODT is a challenge.

The present study is aimed to develop an oral disintegrating solid dosage form of Almotriptan which disintegrates rapidly without the need of water or chewing and release its drug instantaneously showing rapid action for sudden attacks of migraine with good patient compliance for all age groups.

Chemicals: Almotriptan was obtained as a gift sample from Optimus Pharma Pvt. Ltd. All the other chemicals were purchased from A to Z pharmaceuticals, Chennai.

Preparation of Orodispersible Tablets by Direct   Compression Method: Orodispersible tablets are prepared by direct compression. The various disintegrants like crosspovidone, crosscarmellose and sodium starch glycolate were used. All the ingredients are passed through sieve no. 40. Required quantity of each ingredient is taken for each specified formulation and all ingredients were mixed. Aerosil and magnesium stearate were then passed through mesh no.60 mixed and blended with initial mixture. The resulting mixture is compressed into tablet using 16 station rotatory press (table 1 and 2).

TABLE 2: FORMULATION DESIGN OF AN ORAL DISINTEGRATING TABLET USING PRECIROL A TO 5 AS TASTE MASKING AGENT:

Hardness, Friability (F) and Thickness: Hardness or tablet crushing strength is the force required to break a tablet in a diametric compression was measured using Monsanto tablet hardness tester and the friability was tested using a Roche Friabilator.  The thicknesses of the tablets were measured using Vernier callipers.

Content Uniformity: Ten tablets were randomly selected and tested for their drug content. Each tablet was powdered and to it 10 ml of 0.1 N HCl was added and the resulting solution was measured for its absorbance at 283nm using a UV-Visible spectrophotometer.

Disintegration Time: Tablet was placed in the disintegrating apparatus or a disintegrator having pH 6.8 phosphate buffer solution at 37±0.5oC.  Time required for complete dispersion of a tablet was measured.

Wetting time or Water Absorption Ratio: The water uptake characteristic of the loose disintegrant powder allows and evaluation of both the intrinsic swelling and the wettability of the superdisintegrants water uptake were performed at room temperature. Water absorption ratio, R, was determined.

Palatability Test: The palatability test was carried out with 10 volunteers for each taste masking agent and the unmasked drug was taken as the control which was compared with the taste masked drug. A scale of three variations i.e. 0, 1, 2 were given which was interpreted as average, good, better

In-vitro Release Studies: The in-vitro drug release studies were carried out in an USP Type II (Paddle) dissolution apparatus to simulate the physiological conditions of the GIT. The medium used for dissolution is 0.1N HCl with a pH of 1.2. The volume of the medium in the dissolution apparatus was maintained at 900ml. The stirring rate was 50 rpm and the temperature was maintained at 37±0.5oC. Aliquots of dissolution medium were withdrawn at predetermined time intervals and the same volume of medium was replaced to maintain the constant volume.

Compatibility Study: From the FT-IR study the drug was found to be compatible with all the excipients.

Post Compression Evaluation parameters of formulated ODT’s: Almotriptan tablets were uniform in weight (99.9 to 100.2 mg), the thickness (0.210 to 0.218 mm) of all tablets were uniform. The hardness of all the tablets was found to be between 3.00 to 3.04kg/cm2, while the friability of the ODT’S ranged from 0.082 to 0.32% the tablets had enough hardness and friability to withstand stress and were  mechanically stable during handling and transportation.

TABLE 6: PALATABILITY EVALUATION OF OPTIMISED BATCH OF ODT USING PRECIROL A TO 5 AS TASTE MASKING AGENT

In-vitro release study of the Tablets: 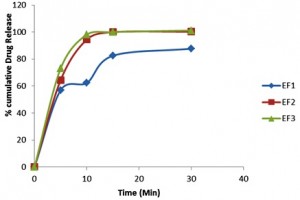 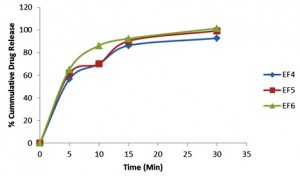 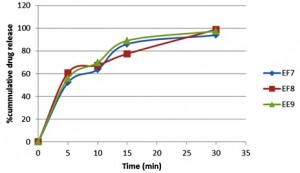 PF7 to PF9 formulations were prepared using crosscarmellose sodium as the superdisintegrant at a concentration of 2.5, 5 and 7.5%  and the in-vitro dissolution values ranged from 52.16-93.92%, 60.78-98.87%, 55.85-97.48% respectively shown in figure 6. It was observed that all the formulations showed a gradient and proportional increase in the drug release. The results were tabulated in table 8. 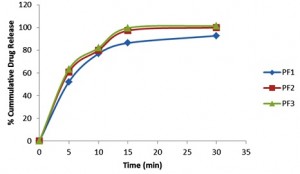 FIGURE 4: Release profile of formulations with Crospovidone using Precirol A To 5 as Taste masking agent 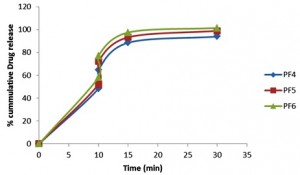 FIGURE 5: Release profile OF FORMULATIONS with Croscarmellose sodium using Precirol A To 5 as Taste masking agent 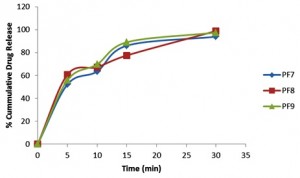 It must also be observed that the in-vitro drug release of the tablets prepared using Eudragit EPO as taste masking agent and Precirol A to 5 as taste masking agent differed. It was found that Eudragit EPO being hydrophilic facilitated the increase in the uptake of the saliva thus showing a complimentary action with that of the superdisintegrants. This was not observed in case of Precirol A to 5 which was hydrophobic in nature. Thus the release profiles using different superdisintegrants are different though the concentration of superdisintegrants remains the same.