ABSTRACT: Forskolin is a heterocyclic labdane-type diterpenoid extracted from the roots of the plant of Coleus forskohlii (Lamiaceae) has been studied in depth for its broad range of pharmacological properties. Coleus forskohlii aids in the control of pestilence of Uzi fly, Exorista sorbillans, and Exorista bombycis one of the gravest ecumenical pests in sericulture industry. Forskolin affected moulting; development and metamorphosis of Uzi fly and induced various types of morphological abnormalities in Uzi fly. The treated resultants of fifth instar Uzi fly maggots, a few of them died during moulting, some of them developed into maggot-pupal and pupal-adult intermediates, abnormal pupae, abnormal adults and remaining treated fifth instar maggots developed into morphologically normal adults exhibiting reduced fecundity when compared to the controls. Coleus forskohlii root extract (CFRE) exhibited growth-regulating activity on the Uzi fly. They affected pupal- adult transformation and produced intermediates along with ovarian deformities deformed adults and also affected the inhibition of pupation and adult emergence. The plant extract repressed the growth and development suggesting its use for effective control of pests like Uzi flies at larval stages. Forskolin can also be used as an antifeedant substance against Uzi fly larval stages.

INTRODUCTION: Insect control using plant material is an ancient practice all over the world. In the search for various alternative ways for pestilence due to increased insect resistance to pesticides, efforts have been executed to promote alternatives to synthetic pesticides, this has led to the discovery of new molecules from botanicals as an alternative pest control agents with decreased toxicity and lesser environmental impacts 1, 2.

Plant products could induce various forms of deformities in pests, helping in pest control 3. Research has been carried out around the world to assess the insecticidal properties in plants; it has been discovered that disturbance of growth and reproduction is one of the important factors in antifeedant and repellent 4. Their mode of action is depicted to disrupt the physiology, development, growth, reproduction, and behavioral responses of pests.

In recent years, there has been an improved effort globally at generating botanicals as new classes of insect control agents that are safe and biodegradable 5. Forskolin is a heterocyclic labdane-type diterpenoid extracted from the roots of the plant of Coleus forskohlii (Lamiaceae) 6, which has been studied in depth for its broad range of pharmacological properties. Uzi fly, (Exorista sorbillans) has been a major endo-larval parasitoid on silkworm, Bombyx mori L. 7, causing considerable damage to the silk industry around the world.

The purpose of the present study is to understand  how Forskolin, the root extracts of  medicinal plant Coleus forskohlii aids in the control of pestilence of Uzi fly, Exorista sorbillans one of the gravest ecumenical pests in the sericulture industry.

Treatments: Different concentrations (0.5, 1.0, 1.5 and 2.0 μL) of CFRE and Forskolin were tested on different stages (i.e., Maggots and Pupae) of Uzi fly life cycle in order to evaluate their efficacy in controlling the morphogenesis or development of maggots into adult Uzi fly and ovarian deformities.

Uzi fly lays 1 or 2 cream-colored eggs on each silkworm larva (5th instar larva). Eggs hatch in 48 to 62 h. A black scar is formed at the point where the egg hatches and the uzi maggot enters the body of the silkworm. This black scar is the main symptom of uzi infestation. Fifth, instar silkworm larvae were reared in the wire mesh cage after treating with 0.5, 1.0, and 1.5 μL of CFRE as well as forskolin, and then a pair of two days old Uzi fly were released into the cage and allowed to oviposit for two days to observe oviposition deterrence. 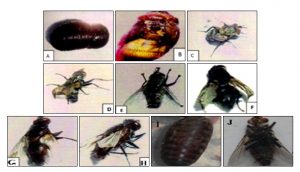 In our study, we observed profound morphological abnormalities in Forskolin treated 5th instar larvae and zero-hour pupae of Uzi fly at various concentrations. First of all, 5th instar larvae were unable to pupate. The Larval-pupal intermediate and Pupal-adult intermediates developed with deformed wings and appendages. Some of the larvae failed to develop into successful adults.

Subsequently, deformities were also noticed in ovarian development. The normal ovarian growth and previtellogenic differentiation of follicles take place in the last instars and pupal period 8. The forskolin treated adults developed with the ovarian deformities, which have caused reduced fecundity.

We observed large chorionated oocytes irregular in shape and were unable to ovulate found blocking the oviduct. Some of the ovarioles with abnormal oocytes were also identified. These observations suggest that Forskolin interferes with the cell division and differentiation of ovarian cells of terminal oocytes, which are abnormally large and unovulated.  The induced abnormalities that are seen emerge at a later stage in the differentiation of follicles. Probably the plant extract Forskolin causes this effect during the differentiation of follicular epithelial cells. In most of the abnormal follicles, the follicular epithelial cells are either absent or irregularly arranged chlorinated fully developed unovulated oocytes.

DISCUSSION: Forskolin belongs to a novel series of tricyclic epoxy-labdanes, characteristic for the plant C. forskohlii 9. Forskal was discovered by a Finnish botanist in 1974, initially referred to as coleonol later renamed to Forskolin 10. The stereochemical elucidation of C. forskohlii from various tissues of the plant consisted of altogether 68 diterpenoids, 25 abietanes, and 43 labdanes 11.

The Hoechst Pharmaceuticals, Bombay (now Hoechst India Limited) elucidated the beta-configuration is at 7-acetoxy group of forskolin, the Central Drug Research Institute (CDRI) group determined the stereochemistry of the compound 11. An apparent identity of the two molecules was denoted relatively to the structure given to forskolin 12. 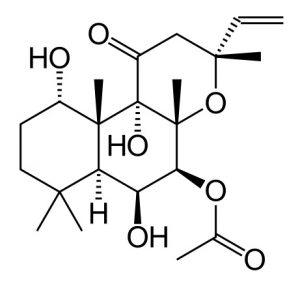 The aeriforms of the plant show predominant accumulation of tricyclic abietane diterpenes, while the roots consisted of the labdane diterpenoids with a bicyclic decalin core. All the pharmacological activities of Forskolin is attributed to Coleus forskohlii. There is an indication that other plant components, such as volatile oils and other diterpenoids and coleonols, may be conducive to the pharmacological activity and absorption of forskolin 13. The prime role of Forskolin is the stimulation of adenylate cyclase, thereby increasing cellular concentrations of the second messenger cyclicAMP 14. It was observed that different concentrations of Forskolin mainly affected the larval development, molting, pupal development and metamorphosis of mainly IVth and Vth instar larvae and pupae of Uzi fly. We also noticed a postponement in the formation of the larval-pupal intermediates. Few of the treated larvae pupated but failed to metamorphose into adult forms. A similar finding with forskolin on Callosobruchus chinensis larvae was reported by Konkala et al. 15

Our results indicate that the administration of Forskolin hindered the normal development of treated larvae and pupae of Uzi fly. The administration of Forskolin resulted in the formation of abnormal adults. Most of these forms were unable to mate, which decreased the fecundity of the Uzi fly. Earlier published studies showed similar observations on plant extracts affecting insect growth regulators in their studies 16-19.

We hypothesize that Forskolin might induce a decreased protein level, which could be an influencing factor affecting the synthesis and uptake of protein during larval, pupal trans-formation, and vitellogenesis. Further research is needed at the molecular to unravel the pathways of forskolin activity. This plant extract forskolin has inhibited the growth and development of the pest Uzifly, (Exorista bombycis), which causes considerable damage to silkworm rearing, and thus, we recommend its use as a botanical pesticide which is both economical as well as eco-friendly.

One of the major effects brought about by plant constituents on insects is the antifeedant activity, which causes feeding deterrence, which eventually leads to the death of the insects due to starvation. The botanical extract Forskolin was found to imply this antifeedant effect on the fourth instar larvae of Uzi fly. Similar studies were reported by Vattikonda et al., against pest Papilio demoleus L. 20 Hence, this phenomenon can be utilized in integrated pest management (IPM). Anti-feedants of plant origin have the additional advantage of rapid biodegradability and are friendly to non-target organisms.

CONCLUSION: From the results of the present study, we conclude that the treatment of Forskolin on Uzi fly not only induces morphological deformities but also causes the sterility of adults. This may be due to the inhibitory effects of forskolin on reproductive organ development. The plant extract repressed the growth and development suggesting its use for effective control of pests like Uzi flies at larval stages. Forskolin can also be used as an antifeedant substance against Uzi fly larval stages.

ACKNOWLEDGEMENT: I would like to thank my guide Prof Sabita S Raju, and my colleagues.