ABSTRACT: According to recent studies, the antioxidant related properties of Taxus baccata L. needle extracts are remarkable making it a possible raw material for the pharmaceutical industry, hence requiring the identification of major bioactive compounds and the assessment of the antioxidant properties of the extracts. The aim of this study was to investigate for the first time the individual flavonoids and the in vitro free radical scavenging activity of the methanol needle extracts from two Algerian Taxus baccata populations. The identification process was carried out using liquid chromatography coupled to electrospray ionization tandem mass spectrometry (LC–ESI–MS/MS). A total of twenty compounds have been characterized and identified. Some of which have never been previously reported in T. baccata L. The total flavonoid contents in Taxus baccata showed significant differences (p<0.05) according to the populations. The total flavonoid contents were relatively greater at the Chrea population (TFC = 220.1 ± 6.36 mg RE/g dry extract) compared to the Tikjda population (TFC = 166.6 ± 1.73 mg RE/g dry extract). Similarly, the highest antioxidant activity was observed with the methanolic extracts from the Chrea population [(DPPH IC50 = 29.44 ± 0.99 µg/ml, ABTS IC50 = 10.94 ± 1.06 µg/m). The findings indicated that the Taxus baccata needles possessed strong antioxidant properties and could be an important source of natural compounds for development of new drugs.

INTRODUCTION: Free radicals are formed continuously in the cells as part of normal cellular function; nevertheless, excess production might play a role in the pathophysiology of many disease conditions, including cardiovascular diseases, Alzheimer's disease, diabetes, and cancer 1, 2. The protection against oxidative damage and chronic diseases is achieved through antioxidants 3. In recent years, there has been an increasing interest in the discovery of natural antioxidants as they can protect the human body from free radicals and slow the progression of some chronic diseases 4, 5.

The genus Taxus, commonly named as yew, is a gymnosperm in the family Taxaceaewhich includes nine species of small trees or shrubs 8. One of the species, Taxus baccata, is represented in Algeria. In folk medicine, needles of yew are used to treat asthma, bronchitis, epilepsy and diarrhea 9. Moreover, previous studies reported that Taxus baccata L. contains a diversity of bioactive compounds including phenolic compounds and flavonoids 10, 11 etc., showing many biological benefits as anticancer, anti-mutagenic, anti-inflammatory and anti-HIV properties 12, 13.

Despite the fact that flavonoid compounds were previously reported as constituents of the Taxaceae family plants 14, 15, only two studies have been carried out on the flavonoid composition of the yew tree 11, 16, and little is known about the flavonoids of the plant’s needles. This is the first study of the identification of flavonoids of Algerian Taxus baccata L. Therefore, the present research aims to characterize the flavonoid compounds of methanol extract from two Algerian Taxus baccata populations using liquid chromatography coupled with mass spectrometry (LC–ESI–MS/MS). Another objective was to measure the total phenolic content (TPC) and total flavonoid content (TFC) and further analyze their antioxidant capacity using DPPH and ABTS radical-scavenging activity.

Preparation of Flavonoid Sample: The extraction of flavonoid compounds is carried according to the protocol of Oosthuizen 17 with slight modifications. 20 grams of needle powder were extracted with 200 mL methanol during 6 h in a conventional Soxhlet apparatus. Subsequently, the filtrate was concentrated to dryness in a rotary evaporator (Büchi R II V-700). The obtained crude methanol extracts were stored in dark glass bottles at 4 °C until used for further analyses.

LC–ESI–MS/MS Determination of Flavonoids: The flavonoids present in the methanolic extracts of T. baccata were identified using an LC–ESI–MS/MS. The samples were analyzed by HPLC-MS system (Thermo Fisher Scientific, USA) equipped by a binary solvent delivery pump connected to a photodiode array detector (PDA) and a LTQ mass spectrometer equipped with an atmospheric pressure ionization interface operating in electrospray mode (ESI). Five microliters of the methanolic extracts were separated on a C18 Alltima (150mm × 2.1mm) column (Grace/Alltech, Darmstadt, Germany). The flow rate was set at 200 µl/min, and mobile phases consisted in water modified with formic acid (0.1%) for A and acetonitrile modified with formic acid (0.1%) for B.  Samples were eluted using a first linear gradient from 2% to 20% of B for 70 min, and then a second linear gradient from 20% to 80% of B for 30 min. Mass analysis was carried out in ESI positive ion mode (ESI+).  Full scan MS spectra (100 to 2000 m/z) and data dependent MS2 scans for structural investigation were performed on LTQ (Linear Trap Quadripole). Raw data were processed using the XCALIBUR software program (version 2.1). Experimental exact masses and MS2 fragmentation data were compared to metabolomics Mass Bank: (http://www.massbank.jp, Pubchem Compound: http://pubchem.ncbi.nlm.nih.gov), and other available data from the literature in order to identify the nature of the metabolites.

DPPH Radical-Scavenging Activity Assay: The DPPH radical scavenging activity of the methanol extracts of T. baccata was measured as described byPatra 20 with modifications. The test was performed on a 96-well microplate mixing 80 μl of the methanolic extract at different concentrations or positive control (BHT) with 220 µl of freshly prepared DPPH solution (0.1 Mm). The reaction mixtures were incubated for 30 minutes in the dark, and the absorbance is measured at 517 nm using a microplate reader (SAFAS, Xenius Monaco, and France). The DPPH scavenging capacity of the extract was determined using the following formula:

ABTS Free Radical-Scavenging Activity Assay: The ABTS free radical scavenging ability of the methanol extracts of T. baccata was determined according to the method described byLe Grandois 21 with modifications. Briefly, in a 96-well microplate, 80 μl volume of the methanolic extract at different concentrations or positive control (BHA) was mixed with 220 µl of freshly prepared ABTS solution (7 Mm). The reaction mixtures were incubated for 15 minutes in the dark, and the absorbance is measured at 734 nm using a microplate reader. The test was repeated three times for each concentration. The ABTS scavenging capacity of the extract was determined using the following formula:

LC–ESI–MS/MS Analysis of Flavonoid Compounds: The flavonoid compounds of the methanol needle extracts of the two Taxus baccata populations growing in Algeria were established for the first time using a liquid chromatography with diode-array detection coupled to electrospray ionization tandem mass spectrometry (LC–ESI–MS/MS) in positive mode. The methanolic yew extracts showed similar flavonoid profiles. The identified flavonoids are listed in Table 1, where the compounds are numbered according to their retention times in the obtained chromatograms Fig. 1. 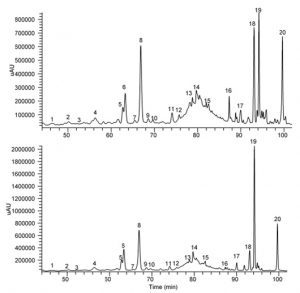 A total of twenty compounds were characterized and identified based on their LC retention times, mass data generated by LTQ-MS, MS/MS fragmentation patterns, or by comparison with literature data.

Compounds 9 and 10 (tR 68.90 and 69.86 min) with pseudomolecular ions [M +H]+ of 303 and 287 were assigned as quercetin and kaempferol, respectively, after comparing their retention times and MS/MS fragmentation patterns with those reported in literature 16.

Compound 18 showed pseudomolecular ion at m/z 331 in the negative ionization mode. In the MS2 spectrum, it gave a base peak at m/z 331 and secondary ions at m/z 295, 267 and 217, respectively. Its chemical structure remains unknown.

Determination of Total Flavonoid Content (TFC): The concentrations of the total phenols and the total flavonoids of Taxus baccata methanolic extracts were determined by the Folin-Ciocalteu and the Aluminum Chloride methods, respectively. The results showed that the T. baccata methanolic extracts were found to contain very high amounts of phenols and flavonoids Fig. 3. 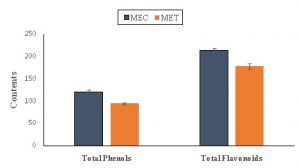 Very few studies have been conducted to measure the total phenol and flavonoid content of T. baccata needles extracts. For example, Guleria 24 found a total phenol content of 69.96 ± 2.73 mg GAE/g in the methanol extract of the Indian Taxus baccata.Milutinović et al., 25 reported that the total phenolic and total flavonoid contents of the methanolic extracts from the Serbian Taxus baccata were 92.13 ± 0.84 mg GAE/g dry extract and 161.98 ± 1.02 mg RE/g dry extract, respectively. The results of our investigation are superior to those mentioned above. As a result, it confirms the richness of Algerian Taxus baccata L. needle extracts in flavonoids, especially the provenance of Chrea.

Free radical scavenging activity Analysis: The antioxidant and the radical scavenging capacities of the methanolic extracts of the two Taxus baccata populations and the positive control (BHT) have been determined by the two well-known methods (DPPH and ABTS) due to their stability, reproducibility and precision 26, 27.

Statistical analysis indicated that there was a significant difference (P<0.05) between the two populations for their antioxidant activity. The highest antioxidant activities were obtained from the methanolic extracts from the Chrea population (DPPH = 87.63 ± 2.22 % and ABTS = 90.16 ± 0.52 %). The antioxidant capacities of the same extract were statistically higher than the synthetic antioxidant BHT (DPPH = 71.75± 9.54 µg/ml, ABTS = 42.63 ± 2.23 %) Fig. 4.

From literature, the DPPH and ABTS are reactive towards most antioxidants including flavonoid compounds 28. Many phenolic compounds such as flavonoids are found to be strong antioxidants effectively scavenging the DPPH and ABTS radicals because of their phenolics hydroxyl groups 28, 29. Our study revealed the presence of twenty bioactive compounds in the methanolic extracts of Algerian T. baccata, which might play an important role inabsorbing and neutralizing free radicals. In this context, the results of our investigation are in accordance with the studies published by Mukherjee 30 and Milutinović 25, which mentioned that the Taxus baccata needles extracts have strong antioxidant properties, acting as DPPH and ABTS free radical scavengers.

CONCLUSION: In this study, we investigated for the first time the flavonoid compound profile and evaluated total phenolic and flavonoid contents in addition to antioxidant activities of needles extracts obtained from two Taxus baccata L. populations growing in Algeria. Our findings revealed that the methanolic extracts were found to have very high flavonoid contents. The analysis of the methanol extracts by LC–ESI–MS/MS showed the presence of twenty bioactive compounds confirming the medicinal interest of this plant. These compounds have very valuable antioxidant properties, acting as free radical scavengers. From these results, it was concluded that the T. baccata extracts could be considered as a potential source of natural bioactive molecules that can be exploited in the food and pharmaceutical field.

CONFLICTS OF İNTEREST: The authors declared no conflict of interest.