INTRODUCTION: In today’s world, there has been an increase in the demand for fish oil containing omega-3. Various by-products from fish including heads, tails, backbones and viscera are used in the production of fish oil, which is a good source of omega-3.1 Omega-3 fatty acids are polyunsaturated fats, which can be obtained from fish or plant. 2 They are considered as essential fatty acids as they cannot be synthesized in the body. 3 The antioxidant activity of fish oil refers to its chemical property of neutralizing free radical damage present in the body. Based on a study done by the American College of Nutrition in August 2002, omega-3s are capable of reducing free radical levels although it is not considered as a super antioxidant. 4

Free radicals are unstable compounds produced mainly from the breakdown of food particles or exposure to environmental toxins. These free radicals may cause damage called oxidative stress in the body, which leads to chronic diseases such as cancer, rheumatoid arthritis and Parkinson’s disease. Insufficient levels of antioxidants or inhibition of antioxidant enzymes may also cause oxidative stress and damage the cells.5 Antioxidants are able to protect the body against oxidative stress by neutralizing the free radicals. 6 DHA and EPA are the examples of omega-3 fatty acids found in fish, in which they provide many health benefits including protection against heart attack and stroke. 4

Antioxidants can be found in various food products such as fruits and vegetables, where they help in reducing the risk of numerous chronic diseases such as high blood pressure, diabetes and cancer. 7 Nowadays, antioxidants can be obtained in different forms such as pills and capsules, which are normally taken by individuals as a health supplement on a daily basis.8

Omega-3s are very useful in reducing triglycerides, blood pressure and inflammation along with lowering the risk plaque formation. A report by the Pharmacist’s Letter states that the anti-inflammatory effects of omega-3 enable it to be used in the treatment of numerous diseases such as Crohn’s disease, rheumatoid arthritis and asthma. Omega-3s can be found abundantly in fish such as salmon, sardines, tuna mackerel and lake trout, in which they help to reduce the effects of inflammation through antioxidant activity.4 Omega-3s found in fatty fish helps to protect the heart and maintain the normal functions of the brain. According to Sarah Rafat, RD, a senior dietitian at MD Anderson Cancer Center, omega-3 fatty acids can reduce inflammation in the body, in which most cancers have been linked to chronic inflammation. In cancer patients, omega-3s help in preventing further growth of tumor cells by stimulating self-destruction of the cancer cells and allow better tolerance to chemotherapy. 8

Preparation of Sample: 4g of fish liver oil was extracted with 8 ml of hexane. Then 8 ml of methanol/water (60:40, v/v) was added and then the mixture was vortexed vigorously for 2 min.

DPPH radical scavenging activity (Koleva et al., 2002) 9 The DPPH assay performed as described (Koleva et al., 2002). Each concentration (0.02 – 4mg/ml) of a test sample (10 µL) in methanol: water was added to 190µL of 150µM DPPH in methanol. After vortex mixing, the mixture was incubated for 10 minutes at room temperature and the absorbance values were measured at 517 nm. The differences in absorbance between a test sample and Control (DPPH alone) was taken and the IC50 values were determined as the concentration of the sample that gave a 50% decrease in the absorbance from a blank test.

Lipid Peroxidation (Ohkawa et al., 1979)10: Liver homogenate was prepared from commercially available chick liver. The liver was quickly excised after decapitation and exsanguinations and washed several times with ice-cold saline solution (with 0.15M KCl, pH 7.4), then homogenized in the same saline solution. 10% liver homogenate was prepared and the test system contained homogenate with a protein concentration of 500 mg/ml. Lipid peroxidation was initiated by the addition of 25µM FeSO4, 100µM ascorbate and 10mM KH2PO4. The homogenates were incubated at 37 oC for 30 minutes with different concentrations of the oil (0.02 – 4mg/ml). Then, 1ml of 5% TCA and 1ml of TBA was added to the reaction mixture and the tubes were boiled for 1h and 30 mins in a boiling water bath. This was centrifuged at 3500 rpm for 10mins. The extent of inhibition of lipid peroxidation was evaluated by estimation of thiobarbituric acid reactive substances (TBARS) level by measuring the absorbance at 532 nm. The Percentage inhibition of lipid peroxidation was calculated as follows:

ABTS radical scavenging activity: 11 ABTS radical-scavenging activity of the extract was determined according to Re et al. The ABTS.+cation radical was produced by the reaction between 5 ml of 14mM ABTS solution and 5 ml of 4.9mM potassium persulfate (K2S2O8) solution, stored in the dark at room temperature for 16 h. Before use, this solution was diluted with ethanol to get an absorbance of 0.700 ± 0.020 at 734 nm. The fish liver oil at various concentrations with 1ml of ABTS solution was homogenized and its absorbance was recorded at 734 nm. Ethanol blanks were run in each assay, and all measurements were done after at least 6 min. Similarly, the reaction mixture of standard group was obtained by mixing 950μl of ABTS.+ solution and 50μl of BHT. As for the antiradical activity, ABTS scavenging ability was expressed as IC50 (μg/ml). The inhibition percentage of ABTS radical was calculated using the following formula:

DPPH free radical Scavenging activity: The reactivity of the fish liver oil was analysed with DPPH, a stable free radical. As DPPH picks up one electron in the presence of a free radical scavenger, the absorption decreases and the resulting discoloration is stochiometrically related to the number of electrons gained. The fish oil showed a dose dependent inhibitory effect on DPPH radical scavenging activity as shown in the Fig. 1. The maximum inhibition shown by fish oil was 96.87±0.76% and that of Olive oil was 97.18±0.40% at 4mg/ml and the IC50 of the oils was 0.148mg/ml and 0.281mg/ml respectively. 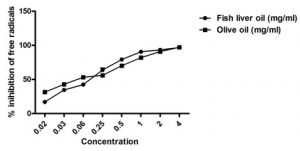 LPO radical Scavenging activity: Lipid peroxidation initiated by O2 radicals may lead to cell injury. Lipid peroxidation has a very short life time (10-9s at 30οC). The fish liver oil exerted its maximum inhibition of 96.10±0.38% at 4mg/ml whereas the standard olive oil showed 93.80± 0.60% at the same concentration. IC50 of the oils was 0.265 mg/ml and 0.304 mg/ml respectively. 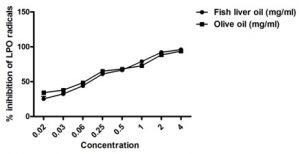 ABTS RADICAL SCAVENGING ACTIVITY: The ABTS.+ scavenging assay, which employs a specific absorbance (734 nm) at a wavelength remote from the visible region and requires a short reaction time, can be used as an index that reflects the antioxidant activity of the test samples. The fish liver oil exerted its maximum inhibition of 90.21±2.10% at 4mg/ml whereas the standard olive oil showed 96.78±0.50% at the same concentration. IC50 of the oils was 0.331mg/ml and 0.601mg/ml respectively.

All values are expressed as mean ±SEM (n=3 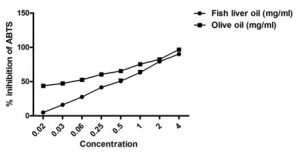 DISCUSSION: DPPH assay confirmed the presence of free radical scavenging activity of the fish oil. 1, 1- diphenyl 2- picrylhyorazyl (DPPH), a stable free radical is used to evaluate the ability of the fish oil to act as potent antioxidants. When DPPH radical is scavenged, the reaction mixture undergoes discoloration with decreasing absorption as DPPH picks up one electron in the presence of a free radical scavenger. 12 Lipid peroxidation initiated by O2 radicals is a well-established mechanism of cellular injury in plants and animals. It is used as an indicator of oxidative stress in cells and tissues. Lipid peroxides are unstable and decompose to form a complex series of compounds including reactive carbonyl compounds. Lipid peroxides are unstable and has a very short life time (10-9s at 30οC), in which in undergoes decomposition into a complex series of compounds. The LPO radical scavenging activity of both oils increased in a dose-dependent manner.

The ABTS.+ scavenging assay, which employs a specific absorbance (734 nm) at a wavelength remote from the visible region and requires a short reaction time. The free radical scavenging activity of 2, 2’-azino-bis 3-ethylbenzthiazoline-6-sulfonic acid (ABTS) can be used as an index that reflects the antioxidant activity of the test samples by estimating the peroxide formation of both hydrophilic and hydrophobic compounds.13 The ABTS radical scavenging activity of both oils increased in a dose-dependent manner.

CONCLUSION: In today’s world, synthetic compounds are widely present in various food we take and which can lead to the production of free radicals. This leads to the production of free radicals by normal cell metabolisms or external sources such as pollution, radiation and medication. High level of free radicals may result in a phenomenon called as oxidative stress. Free radicals accumulated in the body react with biological molecules and affect the normal structure of cells, leading to free radical-induced diseases such as cancer and cardiovascular disease. These harmful effects of free radicals can be overcome by the use of antioxidants. A balance between antioxidants and free radicals is important in maintaining basic physiological functions. Free radical scavenging activity carried out by various methods have proven that fish liver oil can act as a very good antioxidant due to the presence of omega-3 fatty acids. It can be used regularly as a daily health supplement to improve one’s health.

ACKNOWLEDGMENT: The authors extend their gratitude to the management, Saveetha Dental College and Hospitals for the constant motivation to carry out this research work.