Antioxidant activity of methanolic extract of Tectona grandis root was investigated for its free radical scavenging activity by determining the nitric oxide and superoxide radical scavenging activity. Maximum scavenging of nitric oxide and superoxide radical found were 26.61% and 46.64% respectively at 250 μg/ml concentration. The results were compared with rutin as a standard. These results clearly indicate that Tectona grandis is effective in scavenging free radicals and has the potential to be a powerful antioxidant.

INTRODUCTION: Plants are the essential and integral part in Complementary and Alternative medicine and due to this they develop the ability for the formation of secondary metabolites like proteins, flavonoids, alkaloids, steroids and phenolic substances which are in turn used to restore health and heal many diseases. Thus the present investigation was aimed at evaluating the antioxidant activity of Tectona grandis (Linn.) roots 1. Tectona grandis Linn. (Verbenaceae) is a large deciduous tree. Branchlets are quadrangular, channeled and stellately tomentose. The tree is growing in higher situations, native to central India, Konkan, Western Deccan peninsula, South India and Burma. It is commonly known as sagwan (Hindi), saka (Sanskrit) and teak tree (English). Teak is a hardwood species of worldwide reputation. Root contains lapachol, tectol, tectoquinone, β-sitosterol and a diterpene, tectograndinol 2.

Traditionally roots are used in the treatment of anurea and urine retention 3. The principle rationale behind the use of this plant for the study of different pharmacological effects is that the tribal community of Dhule district of Maharashtra is being using the root extract for their common diseases. It is used as anti-inflammatory, anti-bacterial, cytotoxic, anti-anemic, anti ulcer, anti viral, wound healing. Lapachol is the main chemical constituent which is reported in plant. The present paper involves the antioxidant potential of the methanolic extract by nitric oxide radical scavenging assay.

Chemistry: The chemical constituents, which were isolated from the root part of the plant T. grandis are; 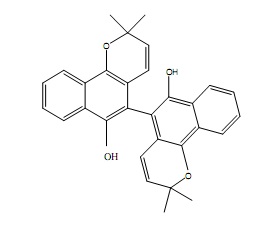 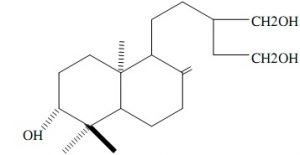 MATERIAL AND METHOD: The roots of the plant Tectona grandis were collected from Haridwar and authenticated by  Rajasthan  university .The roots were dried under shade, coarsely powdered and 50g root powder were extracted with 400ml of methanol for 18h by hot continuous extraction method. The methanolic extract was filtered and partitioned by using petroleum ether to remove impurities. The solvent was evaporated under reduced pressure and dried in vacuum. The dried extract of Tectona grandis thus obtained was used for the assessment of antioxidant activity. The extracts were subjected to preliminary qualitative tests 5, 6 to identify the various phytoconstituents present in leaves. The qualitative chemical tests performed were Shinoda test, ammonia fuming test, lead acetate, boric acid for flavonoid containing compounds and ferric chloride test, nitric acid test, ammonia hydroxide, potassium ferricyanide test, lead acetate test for the presence of tannins. This entire test gave positive results when they were compared with Rutin, standard drug of the class.

Nitric Oxide Radical Inhibition Assay: Nitric oxide radical inhibition was estimated by the use of Griess Illosvoy reaction 7, 8. In this investigation, Griess Illosvoy reagent was generally modified by using naphthyl ethylene diamine dihydrochloride (0.1 % w/v) instead of the use of 1- naphthylamine (5 %). There action mixture (3 ml) containing sodium nitroprusside (10 mM, 2 ml), phosphate buffer saline (0.5 ml) and the extract (20-250 μg/ml) standard solution (rutin, 0.5 ml) were incubated at 25oC for 150 minutes. A control test compound equivalent amount of methanol was taken. After incubation, 0.5 ml of the reaction mixture mixed with 1 ml sulfanilic acid reagent (0.33 % in 20 % glacial acetic acid) and allowed to stand for 5 min for completion of the reaction process of diazotization. Further, 1 ml of the naphthyl ethylene diamine dihydrochoride was added, mixed and was allowed to stand for 30 min at 25oC. The concentration of nitrite was assayed at 540 nm and was calculated with the reference to the absorbance of the standard nitrite solutions. Rutin was taken as a standard. The percent inhibition was calculated using the formula: 9 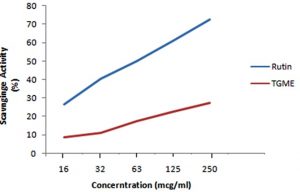 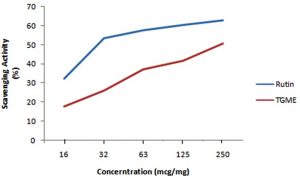 RESULTS: The preliminary qualitative tests indicated the presence of flavonids, phenols and tannins. Several concentrations ranging from 16-250 μg/ml of the Tectona grandis were tested for antioxidant activity in different in vitro models. Table 1 shows that the percentage inhibition of nitric oxide and hydrogen peroxide by TGME. The percentage inhibition for the hydrogen peroxide was found to be moderate and nitric oxide radical is significant when compared to the reference standard (Fig. 1 and 2). Values are expressed as mean ± SEM of three measurements.

Statistcal Analysis: Statistical analysis was performed by the student t-Test and by ANOVA. IC50 values for all the above experiments were determined by linear regression analysis. The activity is increasing with the concentration and difference were statistically significant (p<0.01).

Nitric oxide radical generated from the sodium nitropruside and measured by the Greiss reduction. Sodium nitropruside at physiological pH spontaneously generates nitric oxide, which thereby interacts with oxygen to produce nitrate ions that can be estimated by use of Greiss reagents. Hydrogen peroxide is a non-radical form of ROS that is formed in living organisms by superoxide dismutase. Hydrogen peroxide is not by itself very active but it can cross biological membranes and generates hydroxyl radicals which are toxic to cells and can damage a number of biomolecules 14. Thus, removing of H2O2 is very important for protection of living organism. Hydrogen peroxide is highly diffusible and can cross the plasma membrane.

ACKNOWLEDGEMENT: The first author, gratefully acknowledges the Suresh Gyan Vihar University , Jaipur for support  and the principal of the Department of pharmacology for extending all facilities