INTRODUCTION: Free radicals contribute to more than one hundred disorders in humans including atherosclerosis, arthritis, ischemia and reperfusion injury of many tissues, central nervous system injury, gastritis, cancer and AIDS 1, 2. Free radicals due to environmental pollutants, radiation, chemicals, toxins, deep fried and spicy foods as well as physical stress, cause depletion of immune system antioxidants, change in gene expression and induce abnormal proteins.  Oxidation process is one of the most important routes for producing free radicals in food, drugs and even living systems.

Catalase and hydroperoxidase enzymes convert hydrogen peroxide and hydroperoxide to non-radical forms and function as natural antioxidants in human body. Due to depletion of immune system natural antioxidants in different maladies, consumption of antioxidants as free radical scavengers may be necessary 3, 4.  Antioxidants are the substances that reduce, neutralize and prevent the damage done to the body by free radicals.  Antibacterial substances present in tissues of higher plants have long been regarded as important factors in the resistance of higher plants to various bacteria. Hence researchers have always felt the need for scientifically screening the plants, which may help the pharmacologists and phytochemists.

Bioassay screening of natural origin has been the source of innumerable therapeutic agents.  In the area of drug discovery, random screening is a tool in discovering new biologically active molecules has been most productive. For a successful outcome the main requirement is access to a large number of compounds/extracts that must be well screened. Pterocarpus santalinus L.f (Red sanders) belongs to the family Fabaceae, traditionally used in treatment for headache, skin diseases, fever, boils, scorpion-sting and to improve sight 5. Previous chemical constituents revealed the presence of triterpenes, isoflavone glucosides, savinin and calocedrin 6. There is no previous report on free radical scavenging activity. The present study aims to evaluate the free radical scavenging and antibacterial potential of Pterocarpus santalinus.

Plant collection and Extraction: Leaves of Pterocarpus santalinus were collected from Chittor, Andra Pradesh, during June-July 2010.  The species was identified and authenticated by a Taxonomist and voucher specimen, was deposited. Shade dried and coarsely powdered leaves of Pterocarpus Santalinus (1kg) were sequentially extracted with methanol at room temperature for 48 hrs. The extracts was filtered and concentrated under reduced pressure using rotary evaporator to get completely dried extracts (PSMExt). The yield of the leaf crude extract was about 80 g.

Minimum Inhibitory Concentration: The Minimum Inhibitory Concentration (MIC) was performed according to the standard reference method 7. The extract was dissolved in 0.25% dimethyl sulfoxide (DMSO). The initial concentration of the extract was 5mg/ml to 0.039mg/ml. The initial test concentration was serially diluted two folds. Each of the well was inoculated with 5ml of suspension containing 108 CFU/ml of bacteria. The antibacterial agent streptomycin was included in the assay as positive control. The plate with bacteria was incubated 24 hrs at 37°C.  After incubation 5μl of tested broth was placed on the sterile MHA plates and incubated at 37°C. MIC was determined as the lowest concentration of the extract inhibiting the visual growth of the test cultures on the agar plate. The experiment was done in triplicates.

Determination of Total Antioxidant activity: The antioxidant activity of PSMExt was determined by thiocyanate method 8.  Five different concentrations (5, 10, 25, 50, 100 mg/ml) of PSMExt was prepared in methanol and added to a linoleic acid emulsion (2.5 ml, 40 mM, pH 7.0) and phosphate buffer (2 ml, 40 mM, pH 7.0).  The linoleic acid emulsion was prepared by mixing 0.2804 g linoleic acid with 0.2804 g Tween-20 as emulsifier in 50 ml 40 mM phosphate buffer.  The mixture was then homogenized.  The final volume was adjusted to 5 ml with 40 mM phosphate buffer and pH 7.0.  The mixed samples were then incubated at 37°C in a glass flask for 60 hrs, to accelerate the oxidation process 9.  One ml of incubated sample was removed at 12 hours interval and 0.1 ml 20 mM FeCl2, and 0.1 ml 30% ammonium thiocyanate was added.  The absorbance was measured at 500 nm, using a spectrophotometer (DU640i, Beckman). α-tocopherol was used as a reference compound.  To eliminate the solvent effect the control sample that contained the same amount of solvent was added to the linoleic acid emulsion in the test sample Percentage inhibition of lipid peroxide generation was calculated using the following formula.

DPPH assay: The hydrogen donating ability of the extracts was examined by following the method of Blois (1958) 10 with minor modification. Butylated hydroxyl anisole used as a positive control, which was diluted with methanol to prepare sample solution equivalent to 5, 10, 25, 50 and 100 mg of sample/ml solution. 1 ml of 0.25% DPPH was pipetted into a clean tube followed by various concentrations of the sample solution. The reaction mixture was incubated for 30 minute at 37oC. The absorbance of the reaction mixture was measured at 515 nm in spectrophotometer (Hitachi 2050, Tokyo, Japan) was used. The experiment was done in triplicates. Free radical scavenging activity was calculated by the following equation.

Nitric Oxide Scavenging Activity: Nitric oxide (NO) generated from sodium nitroprusside in aqueous solution at physiological pH interacted with oxygen to produce nitrite ions, was measured using the Griess reaction 11. About 3 ml of 10 mM sodium nitroprusside in phosphate buffer was added to 2 ml of PSMExt and the reference compound in different concentrations (5, 10, 25, 50 and 100 mg/ml). The resulting solution was then incubated at 25°C for 60 minutes. A similar procedure was repeated with methanol which served as control.

To 5 ml of the incubated sample, 5 ml Griess reagent (1% sulphanilamide, 0.1% naphthylethylene diamine hydrochloride in 2% H3PO4) was added. The absorbance of chromophore formed during diazotization of nitrite with sulphanilamide and its subsequent coupling with napthylethylene diamine was measured at 546 nm, using curcumin as a reference. The test was performed in triplicates. The percentage inhibition of nitric oxide generated was measured by comparing the absorbance of control and test preparations.

Statistical analysis: The results were presented as mean±S.E.M.  All the parameters were analyzed using student t- test.  P<0.05 was considered as significant.

RESULTS AND DISCUSSION: The results of antibacterial activity and free radical scavenging were depicted in (Table 1) and (Figures 1-3). In the present study, the total antioxidant of PSMExt was determined using the ammonium thiocyanate method. PSMExt showed antioxidant property in a concentration dependent manner.  The result indicated that the PSMExt significantly (<0.05) inhibited linoleic acid peroxidation. DPPH is an easy, rapid and sensitive method for the antioxidant screening of plant extracts. The present study investigated the scavenging activity of PSMExt, and expressed in percentage of inhibition of DPPH free radicals using BHA as standard reference. 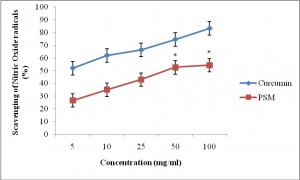 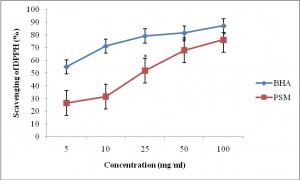 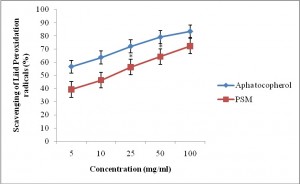 Significant scavenging activity was observed in PSMExt. Antioxidant plays a vital role in inhibiting and scavenging radicals, thus providing protection to humans against infections and degenerative diseases. Numerous plant constituents have proven to show free radical scavenging activity.  Flavonoids and other phenolic compounds of plant origin have been reported as scavengers and inhibitors of lipid per oxidation 14.  Antibacterial study of Pterocarpus santalinus inhibited the growth of gram positive bacteria and gram negative bacterium. Maximum inhibitory activity was observed against Bacillus subtilis (0.312 mg/ml), however no activity was found against Pseuomonas aeuroginosa and Klebsiella pneumonia.

Phytochemical analysis showed the presence of flavonoids, terpenoids and steroids, these constituents have diverse pharmacological properties including antioxidant and antimicrobial activity 15. Antioxidant and antimicrobial activity of Pterocarpus santalinus may be due to the synergetic effect of two or more chemical constituents of the plant extract.

CONCLUSION: Based on our observations, it was confirmed that Pterocarpus santalinus (Leaf) showed strong in vitro free radical scavenging effect in cell free system. Phytochemical research is needed to identify the active principles responsible for this biological activity of this medicinal plant. Further studies are aimed at the isolation and identification of bio-active molecules from the methanolic extract of Pterocarpus santalinus.