Objective: Study to elucidate the relation between depression, gender and blood groups.

Methods: The study was prepared on 279 medical students of IMTU, who have spent more than four months in the medical school. A Performa for testing depression scale was given to the students. Blood groups and gender were analyzed.

Conclusion: The present study shows that blood groups and gender and depression scales are interconnected

INTRODUCTION: Depressionis a condition of low mood and disgust to activity that can affect a person's thoughts, behavior, feelings and physical well-being. Depressed people may feel sad, restless, empty, hopeless, helpless, worthless, guilty, irritable, or edgy. They may lose interest in activities that once were delightful, experience loss of appetite or overeating, or problems concentrating, remembering details or making decisions; and may contemplate or attempt suicide. Insomnia, excessive sleeping, fatigue, loss of energy, or aches, pains or digestive problems that are resistant to treatment may be present.

The connection between depression and stress is complex and circular.  People who are stressed often neglect healthy lifestyle practices. They may smoke, drink more than normal, and neglect regular exercise.

Losing a job is not only a blow to self-esteem, but it results in the loss of social contacts that can buffer against depression. Interestingly, many of the changes in the brain during an episode of depression resemble the effects of severe, prolonged, stress. Human red blood cell membranes contain more than three hundred different antigenic determinants, the molecular structures of which are dictated by genes at numerous chromosomal loci. The term “blood type” refers to the antigen phenotype, which is the serologic expression of the inherited blood group genes, such as A, B, and O in the ABO system. The prevalence of certain diseases is related to blood type.

Type O non secretors have about twice the incidence of duodenal ulcer compared to secretors of types A or B. On the other hand, type A carries higher incidences of tumors of salivary glands, stomach, and pancreas compared to type O. persons who lack the antigens in the Duffy blood system are sheltered against infestation by the malarial parasite 1. Relationships of ABO blood types to personality, behavioral patterns, ischemic heart disease, and ovarian cancer have been broadly studied 2-4.

A small number of studies have observed associations between blood types and osteoporosis in aged people and whether significant differences exist in the mean values of bone mineral density (BMD) and the prevalence of osteoporosis in relationship to the ABO blood types of postmenopausal women 5.

In this study we have done an investigation to substantiate whether there is any relation exists between the ABO blood groups and a stress related depression among a group of medical students.

METHODS AND SUBJECTS: The study was done on 279 (125 females, 154 males) students who have spent more than four months in International Medical and Technological University, Dar Es Salaam, Tanzania. An ethical clearance was taken from the Research Ethical Committee, IMTU.

All individuals prepared to participate were asked to do blood test to confirm their blood group. A combo pack (A, B, D and AB) for blood grouping antibodies for slide and tube test (Narula Exports, ISO 9001: 2000/ISO 13485:2003 Certified company, Mediclone Biotech Pvt. Ltd.) is used to determine blood groups.

A self-administered Performa with 30 questions for analyzing the depression scales was distributed among the students. They were also asked to write their blood groups and gender on the given Performa. They were provided with a fixed time to answer the questions and were marked appropriately. The entire groups were divided into four according to their blood groups. Each groups were further divided into Normal (0-9 marks), Moderate/Mild depression (10-19 marks) and Severe depression (20-30 marks) groups. 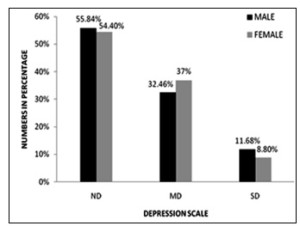 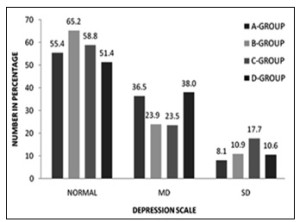 In figure 2, we have done a comparison between different blood groups in normal, mild and severe depression. In normal it is observed that Blood group B is showing the highest percentage of normal state (65.2%) and group AB (58.8%), group A (55.4%) and group O (51.4%) have kept count at the rear.

When the mild depressed group is observed, blood groups O (38%) and A (36.5%) were shown the highest prevalence. The blood groups B (23.9%) and AB (23.5%) were demonstrated the lowest occurrence of mild depression.

DISCUSSION: The study was done on a group of medical students and the percentage of mild and severe depression rates might be due to the stress of studies, sponsorship and residential stay. Among the study there is about 44.76% either having mild or severe depression (Table 1). When assessment made on male and female population, it is evident that females were more prevalent to mild depression and males have shown high severe depression pervasiveness (Figure 1).

A study conducted on Medical students in University of Massachusetts Medical School in 1980’s revealed the existence of stress related depression on either gender. Rather females expressed a high rate of depression than males. The increase in depression scores and their persistence in that study propose that emotional distress during medical school is chronic and persistent .It is also said that black medical students are particularly prone to suicidal thoughts, with 13 percent exposure "suicidal ideation," against 5.7 percent of the general population 6.

Current study made an attempt to locate any relation existing between the individual’s blood group and state of depression (Figure 2). It was evident that most of the normal individuals irrespective of genders were belong to blood group B. Frequency of mild depression were almost similar and elevated in both A and O blood groups. On the other hand blood group B and AB were showing a significant lower percentage of MD individuals. When looking into the severe depressive cases, it is observed that blood group AB was confirming a higher value and the group A was positioned at the last.

A clear cut evidence was shown between ABO groups and the behavior pattern of the men having myocardial infarction and Patients with blood type O scored significantly higher on type A behavior scales and related indices than those having blood type A. The people with blood group B responded on several scales between with types A and O 2. One of the catecholamine enzymes, dopamine beta hydroxylase (DBH), is in rigid linkage disequilibrium with the ABO locus.  Because personality traits as well as poor health have been associated to the catecholamine genes, the DBH/ABO linkage may donate to stratification of ABO blood groups in personality traits as well as in infection 8. ABO group B is associated with personality traits through linkage disequilibrium with low activity dopamine beta hydroxylase.

In a study men with blood group A are said to have high risk of diseases related to stress. In the same article it is stated that the serum cortisol concentration was found highest in blood group A donors , followed by group B, AB and O. When blood group A compared to an equal number of blood group B, indicates that plasma adrenaline level is elevated in group A than in group B.

The current study adding more information to the previous studies done on ABO groups and related disorders. The relation between ABO groups and the depression may be due to the specific enzymes like dopamine beta hydroxylase (DBH) which are said to have a role on maintaining personal traits and behaviors. Another reason may be the diverse concentration of hormones like Cortisol, Adrenaline which are essential for the control of stress (a common cause of depression) in individuals with various blood groups.

When considering the social life of the medical students, a depression might be originated from a stress due to poor economy, problems in the family, dilemma in the lessons, basic and clinical examinations.

Both the genders maintained a constant normal state.  As it is a prime phase, additional studies will be carried out to a molecular and genetic level in future to uncover deeper associations between ABO groups and depression.

ACKNOWLEDGEMENT: We express our sincere gratitude to the Dean, Faculty of Medicine, IMTU for giving permission and IMTU management for supporting right through the research. We appreciate the students of IMTU for their active participation in the research.