INTRODUCTION: The World Health Organization (WHO) has estimated that approximately 80% of the world population relies primarily on traditional medicines as a source for their primary health care 1. A peptic ulcer is the most predominant of gastrointestinal diseases. The etiological factors behind the disease are inadequate dietary habits, prolonged use of NSAIDs, stress, H. pylori infection, and some genetic factors 2.

Peptic ulcer diseases involve the increased expression of IL-8 4 and the pathogenesis of gastric inflammation, ulcerogenic, and carcinogenesis with H. pylori infection lies in increased production of reactive oxygen species (ROS) 5. Based on these findings, substances with anti-oxidant and anti-inflammatory property can be utilized for the treatment of peptic ulcer. Scindapsus officinalis (Roxb.) Schott fruits have been widely used in many parts of India for the treatment of various diseases and ailments. Scindapsus officinalis has previously reported possessing antioxidant 6, analgesic, anti-inflammatory 7, antibacterial 8, antidiabetic 9 and antihistaminic activity 10. Therefore, the present study was undertaken to evaluate the antiulcer activity of the hydroalcoholic extract of Scindapsus officinalis fruits.

Plant Material and Extraction: Fruits of Scindapsus officinalis were collected from the local market and were authenticated at Department of Botanical & Environmental Sciences, Guru Nanak Dev University, Amritsar, India. Dried fruits of the plant were weighed accurately and subjected to cold maceration extraction using alcohol and distilled water in 1:1 ratio.

Total Antioxidant Capacity: The total antioxidant capacity of the hydroalcoholic extract was measured by the spectrophotometric method as described by Preito et al. 16 Briefly, 0.1ml of the extract, dissolved in water, was added to 1ml of reagent solution (0.6 M sulphuric acid, 28 mM sodium phosphate and 4 mM ammonium molybdate). The mixture was incubated at 95 ºC for 90 min. After cooling to room temperature, the absorbance of the aqueous solution was measured at 695 nm against a blank. Using ascorbic acid as the standard, the total antioxidant capacity of the extract was expressed as milligram equivalent of ascorbic acid/g of extract.

DPPH Free Radical Scavenging Activity: The free radical scavenging activity of the extract was measured in terms of hydrogen donating ability using DPPH as described by Blois et al., and Chowdhary et al. 17, 18 Briefly, 2 ml of DPPH solution in methanol (0.1mM) was added to different concentrations of the extract solution. The mixture was incubated at room temperature for 45 min, and the absorbance was measured at 518nm against blank (methanol) using ascorbic acid as standard. Percentage inhibition of DPPH free radical was calculated using the equation:

Nitric Oxide [NO] Scavenging Assay: The NO scavenging potential of the hydroalcoholic extract was determined using the method of Mandal et al., and Green et al. 19, 20 Briefly, different concentrations of the plant extract were mixed with sodium nitroprusside solution (10 mM), and the mixture was incubated at 25 °C for 150 min. About 0.5 ml aliquot of the incubated sample is mixed with 0.5 ml of Griess reagent and the absorbance of the formed chromophore was measured at 546 nm using ascorbic acid as standard.

The percent NO scavenging activity was calculated as follows:

Experimental Animals: Wistar rats of either sex, weighing 200-250 gm, were used. The experimental protocol was approved by the Institutional Animal Ethics Committee. The rats were quarantined for 7 days and evaluated for weight change and any sign of injury before the study begins. They were kept in 12 hour light and 12 h dark cycle at a temperature of 25 ± 2 ºC and provided with standard diet and water ad libitum.

Experimental Design: Rats were divided into five groups, containing six animals each. The group treated with vehicle alone (Group I) was considered as normal control. The animals of group II were considered as experimental control or pylorus ligated. Animals of group III were treated with standard drug ranitidine (50mg/kg). Animals of Groups IV and V were given a hydroalcoholic extract of Scindapsus officinalis fruits at 250 mg/kg and 500 mg/kg, respectively. After 1 hr of the respective treatment, pylorus of each rat was tied under light ether anesthesia and the abdominal incision was closed. After 2 h of pylorus ligation, the rats were sacrificed, their stomach was excised and opened along the greater curvature 21. The mucosal surface of the stomach was observed, and the extent of gastric damage was scored as:

Mean ulcer score for the test groups were expressed as the ulcer index and was compared with that of the positive control group to determine the percent protection.

Free Acidity and pH of Gastric Content: Gastric juice, collected from the pylorus-ligated rats, was centrifuged, and its volume and pH were measured. Free acidity was measured according to the method used by Dashputre and Naikwade 22 and Singh et al. 23 using Topfer’s reagent.

Total Acidity of Gastric Content: An aliquot of 1ml gastric juice diluted with 1ml of distilled water was titrated with 0.01N NaOH, using phenolphthalein as indicator, until a permanent pink color was observed. The volume of 0.01N NaOH consumed was noted.22 The total acidity was expressed as mEq/L and calculated using the equation:

Histopathology Study: Section of gastric tissue was fixed in 10% buffered formalin and was embedded in paraffin blocks. These sections were stained with hematoxylin for the histological evaluation at magnification 40X.

Total Antioxidant Capacity: The total antioxidant capacity of plant extract was found to be 67.52 milligram equivalent of ascorbic acid/g of extract.

Percentage NO Scavenging: The plant extract showed a good nitric oxide scavenging activity between 50 and 800 µg/ml dose-dependently Table 2. However, the effect of ascorbic acid was much less when compared to the extract.

Antiulcer Activity (Pylorus Ligation Induced Ulcer): As compared to the normal rats, pylorus ligation caused gastric damage with ulcer index of 4.58 ± 0.30 in the experimental control rats. Ranitidine and HAESO were found to produce a significant reduction in the ulcer index in dose-dependent manner as represented in Table 3. Ranitidine was found to produce percent protection of 94.32%; however, HAESO 250 mg/kg and HAESO 500 mg/kg showed percent protection of 46.06 and 89.08% respectively. All the aggressive factors, e.g. gastric volume, total acidity, and free acidity were decreased, and gastric pH was increased in the ranitidine treated and extract-treated groups, providing evidence of their antiulcer activity Table 3. 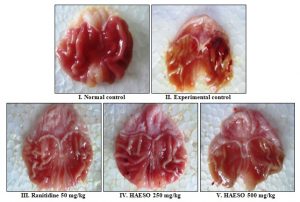 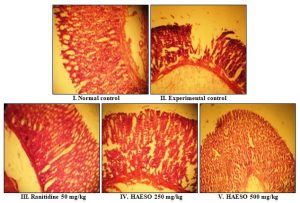 DISCUSSION: Phytochemical tests on the extract gave positive results for alkaloids, carbohydrates, flavonoids, saponins, phenols, diterpenes, tannins, proteins, and amino acids. The obtained results strongly suggest that phenolics and flavonoids are the major components of the extract, and therefore, some of the pharmacological effects that could be attributed to them.

The antioxidant activity of HAESO fruits was investigated using total antioxidant activity capacity, DPPH free radical scavenging assay, and NO scavenging assay. The free radical DPPH possesses a characteristic absorption at 517 nm. The radical scavengers cause reduction of DPPH by providing proton, which is indicated by color change (from purple to yellow) and a decrease in its absorption. The HAESO proved to be almost equivalent in offering protection against DPPH free radicals as compared to the standard ascorbic acid. NO, and reactive nitrogen species (RNS) have been reported to be involved in the oxidative cellular damage 29. The major reactive species of NO are nitrous anhydride (N2O3) and peroxynitrite (ONOO-). These free radicals are capable of damaging a lot of cellular components such as proteins, lipids, and DNA 30. Free radicals are involved in the pathogenesis of pylorus ligation induced ulcer 31. The result indicated that HAESO has a significant effect on scavenging free radicals. Therefore, the protective effect of HAESO against ulcer induced by pylorus ligation could arise from the ability to scavenge free radicals.

The antiulcer activity of the HAESO was evaluated against gastric lesions induced by pylorus ligation. Ulcers caused by pylorus ligation are due to increased accumulation of gastric acid and pepsin, leading to the autodigestion of gastric mucosa 32. Due to the surgery, the stomach gets larger; the pressure on sensitive receptors in the antral gastric mucosa increases and activates the vagus-vagal reflex, causing increased gastric secretion.

Ulcer index is the measure of the magnitude of ulceration produced in the animals. It is determined from various morphological changes in the gastric mucosa such as spot ulcers, hemorrhagic streaks, perforation, and red coloration. It is evident from the result that pretreatment with hydroalcoholic extract of Scindapsus officinalis fruits significantly reduced the ulcer index in pylorus ligation induced ulcer model as compared to the experimental control animals. The ability to the extract to protect the gastric mucosa from the damage induced by pylorus ligation was expressed in terms of percentage protection.

The extract provides considerable percentage of protection against pylorus ligation induced ulceration. Moreover, animals treated with ranitidine and HAESO showed they decreased gastric acidity and increased pH of gastric content. The volume of gastric content was also reduced in these groups representing a possible anti-secretory activity of the ranitidine and extract.

Inside an organism, there are various antioxidant enzymes, which protect the body from the deleterious effect of reactive oxygen species generated through normal metabolic processes. Any imbalance in the activity of these enzymes leads to accumulation of free radicals which cause oxidation of tissues leading to lipid peroxidation and tissue damage 33. As shown in the result, a marked decrease in the antioxidant enzymes like GSH and CAT, and an increase in the lipid peroxidation by-product (malondialdehyde) were observed in the experimental control group.

Such results can be correlated to the pathogenesis of inflammation and cytotoxicity as observed in the pylorus ligation induced ulcer model. Treatment with ranitidine and HAESO resulted in a significant increase in the antioxidant enzymes and decrease in the lipid peroxidation, providing evidence of their efficacy in preventing the intensity of reactive oxygen species induced damage.

CONCLUSION: The results obtained in this study displayed that the hydroalcoholic extract of Scindapsus officinalis can be a potential therapeutic option in the effective management of ulcer because of the presence of phytoconstituents like flavonoids, phenolics, alkaloids, saponins, tannins, etc, and its antioxidant effect. Further investigations are required to isolate and characterize the active components of the plant extract. There is also the scope to find out the exact mechanism responsible for the anti-ulcer activity.