ABSTRACT: Neem (Azadirachta indica) is a member of the Meliaceae family and its role as the health-promoting effect is attributed because it is a rich source of potent biochemicals. It has been widely used in Chinese, Ayurvedic, and Unani medicines worldwide especially in Indian Subcontinent in the treatment and prevention of various diseases. In this present study’s author being investigated and identified biochemically active components in ether and methanolic extracts of stem bark of Azadirachta indica collected from the nursery of Sri Krishnadevaraya University, Anantapur, Andhra Pradesh, India. The stem of the plant washed with water and methanol; dried plant material was successively extracted with petroleum ether at 34 ºC by Soxhlet apparatus for 72 h. The chemical formulas, double band equivalence and percentage of occurrence of the compounds have been elucidated with Fourier Transform Mass spectrometry with ESI detector in the negative mode as well as positive mode. The Instrument was run in full mode m/z (50-1000). METLIN database was used to identify the compounds. Many compounds were identified with m/z A.128.0346, B.273.1506, C.377.0868, etc., among those we have identified two important peaks in the negative mode of analysis, one is at 215.0345 with double bond equivalent 9.5 and percentage of occurrence 2.9423 ppm. When we compare this peak data in METLIN database, we tentatively 6 compounds were identified. The second peak was observed at m/z 387.1234 with double bond equivalent 15.5 and percentage of occurrence 1.8867 ppm; this was also compared with METLIN data identified compound was calomelanol with molecular formula C24H20O5.

INTRODUCTION: It is a largely accepted fact that numerous pharmacologically active drugs are derived from natural resources including medicinal plants 1, 2. Various religious documents such as the Bible and Quran also supported the role of the herb in health care and prevention.

Islamic perspective also confirms the role of the herb in diseases management and Prophet Mohammed (PBUH) recommended various plants/fruits in the diseases cure 3.

Neem ingredients are applied in Ayurveda, Unani, Homeopathy, and modern medicine for the treatment of many infectious, metabolic, or cancer diseases 4, 5. Chemical investigation on the products of the neem tree was extensively undertaken in the middle of the twentieth century. Since, the early report by Siddiqui 6 in 1942 on the isolation of nimbin, the first bitter compound isolated from neem oil, more than 135 compounds have been isolated from different parts of neem, and several reviews have also been published on the chemistry and structural diversity of these compounds 6. The compounds have been divided into two major classes: isoprenoids and others 7. The isoprenoids include diterpenoids and triterpenoids containing protomeliacins, limonoids, azadirone, and its derivatives, gedunin and its derivatives, vilasinin type of compounds and Csecomeliacins such as nimbin, salanin, and azadirachtin. The nonisoprenoids include proteins (amino acids) and carbohydrates (polysaccharides), sulfurous compounds, polyphenolics such as flavonoids and their glycosides, dihydrochalcone, coumarin and tannins, aliphatic compounds, etc. The details of the chemistry of various compounds falling under these groups have already been reviewed 8. Only a few compounds whose bioactivity has been studied are presented here. As the pesticidal and antifeedant activities of azadirachtin and the related compounds have been reviewed earlier 8.

Mass spectrometry (MS) has played an important role in the structural analysis of saponins. In early studies, derivatization was required for saponin analysis using electron impact (EI) MS 9. The development of desorption chemical ionization mass spectrometry (DCI-MS) allowed an analysis of saponins without derivatization, but only for saponins with ether glycosidic linkages 10, 11. Later, field desorption (FD) and fast atom bombardment (FAB) were also employed to analyze native saponins 12-18, providing information about the molecular mass and sugar sequence by cleavage of glycosidic bonds. However, it is difficult to obtain high quality and reproducible FD mass spectra because of the instability of ion currents dependent on the temperature of the emitter 13, 14. The sensitivity of FAB is also not satisfactory because of the chemical noise from the matrix background 15-17. More recently, electrospray ionization (ESI) has become one of the most effective analytical tools for the structural characterization of a variety of polar and thermally labile molecules, e.g., polypeptides, carbohydrates, and natural glycosides 19-22. Recent studies have reported the use of ESI-MS for determination of saponins with higher sensitivity and better reproducibility than the other types of ionization 23-28. Moreover multistage mass spectrometry has great advantages for characterization of compounds by providing structural information 24, 25, 27-31. Electrospray Ionization (ESI) Summary The sample solution is sprayed across a high potential difference (a few kilovolts) from a needle into an orifice in the interface. Heat and gas flows are used to desolvate the ions existing in the sample solution. Electrospray ionization can produce multiply charged ions with the number of charges tending to increase as the molecular weight increases. The number of charges on a given ionic species must be determined by methods such as comparing two charge states that differ by one charge and solving simultaneous equations. Looking for species that have the same charge but different adduct masses. 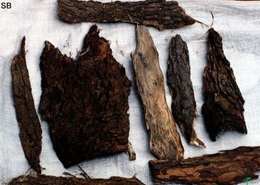 In this present work, we to systematically investigate the structural characterization of underivatized potent chemicals from the stem bark of Azadirachta indica Linn. in the positive and negative ion mode of Fourier Transform Mass Spectroscopy,

Preparation of Plant Extracts: The powder was extracted in petroleum ether in a Soxhlet apparatus for 72 h at room temperature. The ether extract was evaporated in vacuo, giving the residue. It was extracted successively and exhaustively with petroleum ether and methanol, and the extract and fractions were concentrated in a rota evaporator at reduced pressure.  It was filtered through Whatman no. 1 filter paper, and then the volume of supernatant was concentrated at 40 ºC using hot air oven.

When we compare this peak data in METLIN data base we tentatively 6 compounds were identified. Second peak Fig. 5 was observed at m/z 387.1234 with double bond equivalent 15.5 and percentage of occurrence 1.8867 ppm, this was also compared with METLIN data identified compound was calomelanol with molecular formula C24H20O5. 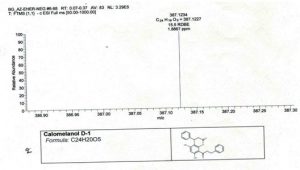 CONCLUSION: This study identification of chemical components may also enhance the traditional usage of Azadirachta indica due to its bioactive compounds identified by FTMS analysis. Thus the FTMS analysis is the first step towards understanding the nature of active principles of bio components in Azadirachta indica. We hope this study will be helpful to further pharmacological studies for drug development research in the pharmaceutical industry.

ACKNOWLEDGEMENT: This research work was financially supported by UGC, New Delhi for providing financial assistance as PDF, UGC Postdoctoral fellowship. We are also thanks to Department of Chemistry Sri Krishnadeveraya University, Ananthapuramu, India, for supporting this study. The authors are thankful to the Indian Institute of Chemical Technology, Hyderabad, for providing the FTMS-Esi instrumental facilities.