ABSTRACT: Histomorphological changes were observed to assess the effect of fungus on gill and pancreas of Channa striatus. The most frequent histological changes detected in the gills included hypertrophy, hyperplasia and fusion of secondary lamellae. Other lesions found were vacuolization and blood congestion in Pancreas. The colonization of aquatic fungi in teleost fish is a severe problem affecting both wild and cultured fish population. However, the fungal infection is more abundant in the captive environment which adversely affects fish industry. An external fungal infection cause lesions, subsequently become enlarge and may lead death. Stress, physical injury, malnutrition and poor water quality increase the susceptibility of fungal infections. Gill and Pancreas are responsible for vital functions such as respiration, excretion, erythropoiesis, regulating blood pressure and the accumulation. The alterations found in these organs are easier to identify than functional ones and serve as warning signs of damage to animal health. Hence, the study of tissue deformities in respect to fungal infection which is commonly encountered in freshwater aquaculture needs to be studied in order to attain maximum yield. Keeping this in mind, the present study was carried out in order to understand and describe the degree of histological alterations in Gill and Pancreas following fungal infection.

INTRODUCTION: In India, fishers are facing serious problems with fungal diseases. Fungi are mostly attacked due to changes in temperature and filthy conditions of water, which causes excessive zoospores to grow. Fishes not only play a vital role in the demand of food for human being but they have also emerged as main model organisms for various biomedical researches 1. The ammonia which is formed by the rottening of fish waste wears is also causative factor for fungal infection 2.

It is freshwater edible fish found susceptible to fungal infection Aspergillus fumigatus and Aspergillus niger is a pathogenic group of fungi causing EUS infection in freshwater fishes. Fungal infections are mainly caused due to immune suppression. Fungi can attack fishes of all the ages, and it can also prevent successful hatching when it invades fish eggs 3.

The EUS has been reported from 24 countries on four continents, and more than 100 fish species have been affected by EUS 11. Aphanomyces invadans-induced epizootics are characterized by the development of deep penetrating ulcers, myonecrosis, and granulomatous myositis 12. EUS occurs mostly during periods of low temperatures and after periods of heavy rainfall.

Fungi are responsible for a number of economically important diseases in teleosts. The Oomycetes Saprolegnia, Achyla, Branchomyces and Ascomycota (Aspergillus flavus, Fusarium solani, Rhizophus stolenifer, Aspergillus fumigatus, Penicillium chrysogenum, Aspergillus niger and Trichoderma viridae) group of fungal pathogens and are commonly seen during winter and are associated with   low oxygen, chemical, sanitary savage and environmental stress factors. They are widely distributed in aquatic habitat, and very few are parasitic. Oomycetes have a common characteristic feature of producing motile biflagellate spores that can cause infection to occur at any time. Saprolegniasis is a common and highly prevalent fungal disease that affects all species and ages of freshwater and estuarine fish. Several factors are involved in the development of fungal infections in fish. These factors may affect the fish or the fungus, and it is a combination of factors rather than any single condition, which ultimately leads to infection. It has long been considered that the fungi responsible for saprolegniasis are secondary pathogens, and lesions are commonly seen after handling and after traumatic damage to the skin, in overcrowded conditions, and conjunction with pollution or bacterial or parasitic or viral infections. The temperature has a significant effect on the development of infections. Most epizootics occur when temperatures are below the optimal temperature range for the species of fish.

As the majority of fungal infections are secondary invaders, the review of fungal infection is included in the section on mixed infections. The microbial flora and mycoflora of the fish skin, gills, liver, and pancreas of the digestive tract have been shown to reflect the freshwater they inhabit and may also pose a threat to humans 13.

MATERIALS AND METHODS: Twenty-five adult live specimens (fungal infected as well as healthy (Channa striatus) were collected from Hasanparthy and Dharmasagar Lake of Warangal District, Telangana, India. After being taken to the laboratory, fishes were dissected, and the samples of gill and Pancreas were fixed in Bouin’s fixative for 24 h. After fixation, the samples were washed in water, dehydrated in graded ethanol solutions, cleared in xylene, and embedded in paraffin. Paraffin blocks were sectioned 4–5 µm thick on a microtome (Microm HM 340E). The resulted sections were dewaxed and stained for histological purposes with haematoxylin and eosin (H and E) (Delafield, 1885). Histological sections were examined through light microscope (Magnus MLX-DX) equipped with digital camera (Olympus E-420) at the magnification of 100x to 1000x.

Hyperplasia and hypertrophy of nuclei were also seen. Besides these changes pyknotic nuclei, vacuolization, and degeneration of epithelial cells and pillar cells and lifting of the epithelial layer from the secondary lamellae were also observed.

Fungal gill disease is the most lethal of these categories, are discussed here. In the present study, hyperplasia, and hypertrophy of the epithelial cells, epithelial lifting, lamellar disorganization, lamellar aneurysm, rupture of the lamellar epithelium, rupture of pillar cells and necrosis were observed due to EUS infection. Observed irregular appearance of gill lamellae, increased vacuolation in epithelial cell, lamellar fusion and complete destruction of gill lamellae in poecilia reticulate exposed to chlorpyrifos.

The damages occurred in the secondary gill lamellae with light precipitation of mucous and exfoliated nuclei, splitting of muscle fibers in the freshwater fishes exposed to acute and chronic EUS Infections. Bacteria and fungi affect organ systems, specifically during the winter season.

This can be speculated that pathological alterations like hyperplasia of epithelial cells, epithelial lifting, and lamellar fusion may increase the space of contact of toxicants with the vascular system of gill, resulting in impairment of respiration as well as fish’s health.  Severe hyperplasia results in the fusion of secondary lamellae frequently also results in alterations such as blood congestion, hypertrophy of epithelial cells and lamellar disorganization 15. Hyperplasia of the epithelial cells and subsequent lamellar fusion, goblet cell proliferation as well as the migration of eosinophilic granular cells (EGCs) to gills of fishes infected with these parasites has been recorded 16.

According to 17 gill lamellae with degraded epithelium and fungal hyphae encapsulated by multiple layers of fusion of some secondary lamellae was due to severe infection. In October and November, both the primary and secondary gill lamellae were arranged systematically, and no significant pathological symptoms were observed in the structure of gill. 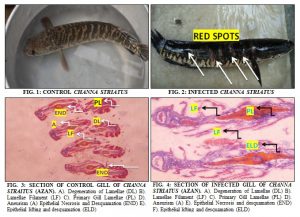 The examination of infected pancreas reveals the degeneration of some glandular cells and presence of few lymphocytes around the acini. No granules were observed, and extensive tissue damage was observed in liver tissues. Tissues from the liver revealed focal to coalescing necrosis of the interstitial tissue. In the liver, sinusoids were distended and partially filled with granular, eosinophilic material (edema fluid).

Many cells with pycnotic nuclei were observed randomly distributed throughout the liver tissue. The tissue damages such as degeneration of cytoplasm in hepatocytes, atrophy, formation of vacuoles, rupture in blood vessels and disposition of hepatic cords were the histopathological changes observed in the liver 19 Fig. 5 & 6.

Histopathological changes in the gill of Labeo rohita were reported 20. Club shaped lamellae represent progressive degeneration in the gills. (Wannee et al., 2002) 20 stated filament cell proliferation, lamellar cell hyperplasia, lamellar fusion, epithelial lifting and aneurysm in the Nile tilapia, Oreochromis niloticus under exposure to glyphosate for 96 h. Histological damage to gill surfaces in the present study may be attributed to high accumulations of pesticides in gills, irritation due to elevated mucus secretion. Aspergillus and Mucor sp. in eyes and Aspergillus, Rhizopus on gills and pectoral fins were common. Aspergillus was the most common fungus which was isolated from all parts of fish.

The effect of fungal infections on the histopathological changes of the pancreas has been studied.  Results were obtained from infected and control groups.  After the severe infection in the pancreas exhibited considerable atrophy and degeneration of cells. The cells have lost their cytoplasmic granules. Distinct vacuolization of large number of cells was observed. But in the winter season the infected fishes had shown a rapid change in the cells and cellular configuration. The distinct vacuolization in a large number of alpha cells and degranulation in the beta cells were quite conspicuous. The infection is prolonged in the pancreas exhibits, prominent necrosis of beta cells and atrophy of alpha cells were clearly seen. Widespread loss of cytoplasmic constituents of beta cells and vacuolization of alpha cells was observed. Almost all the cells of the pancreas were considerably depleted.

The pancreas of control mollies their areas of endocrine pancreas (hepatopancreas) located near the small veins of the hepatic portal vein. The exocrine pancreas was found as islet of Langerhans and was associated with the endocrine pancreas and scattered in the mesentery, primarily near the pylorus and associated with bile ducts and anterior hepatic portal vein. The veins represented endothelial cells with a few erythrocytes in their interior. The pancreocytes were seen as islets with their lamellar lining in an acinar pattern surrounding a branch of the portal vein. The histopathological changes noticed in the infected condition exocrine pancreas were represented by acinar tissue damage of varying severity, focal or diffuse pancreatic cell necrosis, increased adipocytes, pancreatic atrophy and dramatic atrophy of the pancreatic acini 21.

The damage of gills in fishes exposed to the high level of disease was severe. Shortened and clubbing of ends of the secondary gill lamellae, a fusion of adjacent secondary gill lamellae, and necrosis in the primary lamellae were well marked. Hyperplasia and hypertrophy of nuclei were also seen Extensive tissue damage has been observed in liver tissue. Sinusoids were distended and partially filled with granular, eosinophilic material. The tissue damages like degeneration of cytoplasm in hepatocytes, atrophy, formation of vacuoles, ruptures in blood vessels and disposition of hepatic cords are the histopathological changes observed in the liver. This was intended to give a deeper insight into the morphological and functional aspects of the skin, gills, liver, and pancreas, which provides a basis for the species culture.