ABSTRACT: Peptic ulcer is a condition associated with a number of factors involving excessive acid secretion in the stomach. This condition is difficult to control with single drug therapy and complete cure cannot be achieved. Even after discontinuation of the drug the relapse rate is high, and the long-term use of synthetic drugs produces adverse effects on the human body. The present study is expected to diminish millions of people suffering from ulcer in the country. This will not only provide them relief but will be safe enough from side effect as observed in allopathic medicines. So present study was to investigate gastro protective effect of selected Indian medicinal plant Trichosanthes dioica belonging to family: Cucurbitaceae. 50% ethanolic extract of Trichosanthes dioica fruit extract (TDE) was used for gastro protective effects on experimental models in rats. The entire drug solutions were prepared in 1% CMC solution and administered twice daily for five days or 10 days for prevention using three distinct animal models Model 1: Pylorus ligation + aspirin induced gastric ulcer model, Model 2: Acetic acid induced gastric ulcer, Model 3: Ethanol-hydrochloric acid induced gastric ulcer. Estimation of other biochemical parameter like total acidity Peptic activity, muco-substances, total hexoses, hexosamine, fucose, sialic acid and Protein also.

INTRODUCTION: Traditional medicine is defined as the sum total of knowledge, skills and practices based on theories, beliefs and experiences, that are indigenous to different cultures, they are used to maintain health, as well as to prevent, diagnose, improve or treat physical and mental illnesses 1. In most countries traditional medicine is better known as complementary alternative or non-conventional medicine.

However, for most developing countries traditional medicine is not an alternative, but the main supply of medicine for the population’s primary health care. According to World Health Organization (WHO), 75% of the Malian population depends on traditional medicines and the interest in traditional medicine is growing 2. The species Pointed gourd (T. dioica) is known by the name parwal, palwal, patol, potala is an easily available and well known plant used in Indian system of medicine. Also fruits of T. dioica are cultivated in India, Japan, Sri Lanka, China, and Thailand. The fruits being an integral part of an average Indian diet are consumed as vegetable. The fruits and leaves are edible parts of the plant which are cooked in various ways either alone or in combination with other vegetables or meats 3.

Hence, it would not be wrong to state that still a lot has to be worked upon this important plant. Apart from this old traditional literature like Charak Samhita mentioned the protective role of T. dioica on important body organs like liver, spleen etc, many of which are now scientifically proved. T. dioica may play a significant role in developing formulations for geriatric care as it contains almost all the properties of pharmaceutical care designed for the elderly i.e. antioxidant property, antidiabetic property, cholesterol lowering 4 and hepato protective, constipation, fever, skin infection & wound etc. It would be fruitful to investigate further, the specific active constituents of the plant responsible for its therapeutic actions. Gastric hyperacidity and ulcer are very common for today. It is an imbalance between damaging factors within the lumen and protective mechanisms within the gastro duodenal mucosa. Although prolonged anxiety, emotional stress, frequent use of non-steroidal anti-inflammatory drugs (NSAIDs), hemorrhagic surgical shock, burns and trauma are known to cause severe gastric irritation, the mechanism is still very poorly understood 5. Now days, research has been increased in treatment of ulcer after evidences of involvement of Helicobacter pylori and other factors in the pathogenesis of ulcer. The antiulcer drugs used in the treatment of gastric ulcers have been reported for various side effects like, nausea, constipation, abdominal pain and diarrhoea. The disease has been also reported for high chances of recurrence and mortality. Thus, there is a need for more effective and safe antiulcer agents aiming to relieve pain, heal the ulcer and delay ulcer recurrence. Herbal medicines are considered safer because of their natural ingredients with no side effects 6.

Collection and Authentication of Plant Material: T. dioica fruits were collected from the local vegetable shop. The fruits were identified and taxonomically authenticated by comparison with the departmental herbarium of National Botanical Research Institute, Lucknow, India. The fresh fruits were washed with tap water, air dried homogenized to fine powder and stored in air tight bottle.

Preparation of Extracts: The air dried powder fruit (800 g) was exhaustively extracted by overnight maceration with 50% v/v ethanol and centrifuge at the rotation on at 10000 rpm. The 50% v/v ethanolic fruits extracts was filtered and concentrated using vacuum rotatory evaporator (Khera, India) and dried using lyophilizer under reduced pressure to obtained solid residue and kept in desiccators for further analysis.

Animals Used: Sprague-Dawley rats (140-160 g) and Swiss albino mice (14-16 g) of either sex were procured from the central animal house of National laboratory animal centre Lucknow. These were kept in the departmental animal house (IAEC no1732/GO/R/S/13CPCSEA, NBRI/IAEC/PH/6-9) at 26 ± 2 ºC and relative humidity 44 - 56%, light and dark cycles of 10 and 14 h respectively for 1 week before and during the experiment for acclimatization. The animals were provided with standard rodent pellet diet (Gopal, India) and the food was withdrawn 18-24 h before the experiment, though water was allowed ad libitum. All experiments were performed in the morning according to current guidelines for the care of laboratory animals OECD test guidelines 425. The standard orogastric cannula was used for oral drug administration.

Acute Toxicity Studies: Acute toxicity of the 50% ethanolic fruits extract of Trichosanthes dioica was evaluated in mice using up and down procedure (OECD guide line 425). A pilot study was made on a small group of mice using either sex (three males and three female’s, weight 25 to 30 gm, age 5-6 weeks) received 50% ethanolic extract at various doses levels (100 mg-2 gm/kg body weight) orally by gavage. The control animals received 1% carboxy methyl cellulose (CMC) in distilled water (10 ml/kg) orally. The animals were observed for toxic symptoms continuously for the first four hrs after dosing. Finally, the survivors were noted after 24 h and these animals were kept under observation up to 14 days.

Model 1: Aspirin-Pylorus Ligation-Induced Gastric Ulcer in Rats: Ulceration in rats was induced by administration of aspirin (a dose of 200 mg/kg orally) as described by earlier researcher 7 (Goel et al., 1985). TDE (100, 200 and 400 mg/kg), CMC (1 mL/kg) as control and ranitidine (50 mg/kg) as positive control were administered 30 min before each aspirin treatment.  On the fifth day pylorus part was ligated following 36 h fasting. The animals were sacrificed with an over dose of ether after 4 h of pylorus ligation. The stomach was opened and the percentage inhibition of ulcer was determined 8.

Model 2: Acetic Acid- Induced Chronic Ulcers: Induction of chronic gastric lesion was studied according to methods cited by earlier researcher 9. Animal were anaesthetized using pentobarbitone (35 mg/kg,i.p) abdomen was opened  and solution of 0.06 mL 50% acetic acid was instilled into the glass tube of 6 mm in diameter and allowed to remain 60s on the anterior serosal surface of the glandular portion of stomach 1 cm away from the pyloric end. TDE was given in the dose of 100, 200, 400 mg/kg on day 1, orally, twice daily, 4 h after application of acetic acid and continued up to 5 days or 10 days.

After induction of ulcer animals were sacrificed after 18 h by an over dose of ether on 6th or 11th day. The stomach was opened and percentage inhibition of ulcer was determined and ulcer area was also calculated based on product length and width (mm2/rat) of ulcer.

Model 3: Ethanol-HCl Induced Ulcer: The experiment was performed as described by 10 (P. Malairajan et al., 2006). After 1 h all the animals were treated with 0.1 mL HCl-ethanol mixture p.o. TDE (100, 200 and 400 mg/kg), (1mL/kg) and ranitidine (50 mg/kg) were administered orally prior to ethanol/HCl treatment.(0.3 M hydrochloric acid and ethanol 60%) to induce gastric ulcer. Animals were sacrificed with anaesthesia, 1 h after administration of HCl-ethanol mixture and then stomach was excised. The length in mm of each lesion was measured, and the lesion index was expressed as sum of the length of all lesions. Mean lesion index for each group was calculated. Percentage ulcer inhibition was calculated for each group & compared with vehicle control group 11, 25.

Study of Gastric Secretion: The gastric juice was collected 4 h after pylorus ligation and centrifuged for 5 min at 2000 rpm and the volume of the supernatant was expressed as ml/100g body weight. The mucosal scrapings were taken from the glandular portion of stomach and were homogenized in distilled water (10 mg/ml) and was used for various biochemical estimation like Total acidity Peptic activity, muco-substances, total hexoses, hexosamine, fucose, sialic acid and Protein 15.

Statistical Evaluation: Data expressed as mean ± SEM (standard error of mean) for five rats. The difference among means has been analysed by unpaired student’s t-test Analysis of variance (ANOVA) was performed to compare and analyse the data and level of significance was determined.

General Behavior and Acute Toxicity Studies: No death was recorded in the 14 days of observation period in the either sex of mice given 2g/kg of the 50% ethanolic extracts of different fruits orally. The animals did not show any changes in general appearance during observation period.

For further subsequent studies on other parameters of gastric secretion or mucosal studies, a dose of 400 mg/kg was selected. 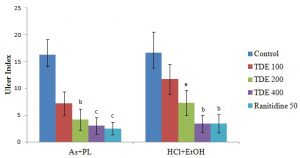 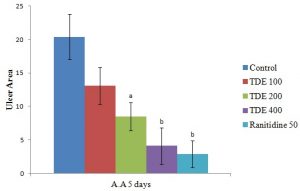 CONCLUSION: Ulcer formation is currently viewed as an interactive process resulting from an imbalance of aggressive gastric juice and defensive mucosal factors, causing a break in the line of gastrointestinal mucosa. The 50% ethanolic extract of fruits was studied in different gastric ulcer model in rats at a dose of 100, 200, and 400 mg/kg body weight p.o. for 5 days (Aspirin + Pylorus ligation induced gastric ulcer, HCl-ethanol induced ulcer and 5 days and 10 days for acetic acid induced gastric ulcer, twice daily.

Results of above study provided preliminary data that the fruits of TDE may possess significant dose dependent reduction in ulcer score and gastric secretion also involve damage by reactive oxygen species apart from acid and pepsin related factor. Increased level of LPO is due to increase in generation of reactive species during ulcer leading to oxidative damage SOD converts the reactive super oxide radicals to H2O2, which if not scavenge by CAT can itself cause lipid peroxidation by generation of hydroxyl radicals.

Hence, decrease in CAT levels has lead to increase in accumulation of these reactive species and thus has caused increased lipid per oxidation and tissue damage’s TDE significantly reverses these oxidative changes in ulcer. These observed effects of TDE may be linked with its antioxidant effect due to the presence of bioactive compounds like flavonoids, saponins and tannins in it. Thus, the present study confirms the use of TDE fruit in the traditional management of peptic ulcer disease. Hence, further studies are required to confirm the exact mechanism underlining the ulcer healing and ulcer protecting property of the TDE extract.

ACKNOWLEDGEMENT: The author is grateful to the Dr. Ch. V. Rao sir for providing necessary guidance to carry out the experiments.