INTRODUCTION:Owing to tremendous curative benefits of the oral controlled release dosage forms are being preferred as the interesting topic of research over the past 3 decades 1. The much obvious interest in this scenario is owing to its two fold advantage. Primarily, the oral controlled release dosage forms have the potential to upkeep an effective concentration in system for a longer duration.

Secondly, it is helpful in providing easy dosage administration to the patient, that further provides patient compliance on the part of the patient and ultimately providing an array of options in the final formulation. But the benefits are yet obstructed by the knock of short gastric retention time (GRT) and the unpredictable rapid gastric rate may cause partial drug release in the absorption zone of the patient’s body hence, hampering the efficiency of the dosage. It has caused the awaited development in oral gastroretentive drug delivery systems (GRDDS) 2.

An unaccustomed drug delivery system of gastroretentive dosage form has evolved. It has an upper hand owing to its ability of prolonged retaining ability in the stomach. This improves the gastric residence span of drugs in stomach. This elongated retention ability provides more benefits which may be enumerated as: improving activity span for short half-life drugs, bioavailability of drugs, exclusion of side effects, reduction in dosage periodicity, saving drugs owing to former benefit, improves solubility for drugs that are less soluble in a high pH environment, optimized therapy and ultimately easy compliance on the part of the patient 3, 4.

Basic Gastrointestinal Tract Physiology: The stomach primarily aims at processing and transporting food. The stomach provides for short term food reservation and quick consumption of relatively large meal. The primary substantial metabolism of enzymes is promoted in stomach of proteins. The peristalsis of stomach mix up and grind consumed food with secretions of the stomach, turning food in simplified liquid form. The liquefied bulk is transported to the small intestine for further digestion 6.

The human anatomy categorises stomach in three main parts: fundus, body and antrum (pylorus). The proximal portion referred to as fundus and the body functions as storage for undigested food. The antrum provides for the main site for mixing motions and acts as gastric emptying pump by propeller actions 7.

Both the fasting and fed states cause gastric emptying. However the two states are varied upon pattern of motility. In this phenomenon, series of electric events takes place in cycles via stomach and intestine every 2 to 3hous 8. There occurs a phenomenon of interdigestive myloelectric cycle or migrating myloelectric cycle (MMC), which is divided in 4phases as given by Wilson and Washington 6. The 4 phases are enumerated below and also shown in Figure 1.

Upon food being ingested, the stomach motions vary fasted to fed state. It’s termed as digestive motility pattern and constitutes regular peristalsis as in phase II of the state of fast. This incredibly reduces food size (to less than 1mm), propelling food towards pylorus. The gastric emptying rate is delayed during fed state onset of MMC, causing slowdown of gastric emptying rate 9.

Why there is need of GRDDS? There occurs a quick elimination of certain drugs, that have been absorbed from the gastrointestinal tract (usually having short half-lives), from circulatory system due to which frequent dosing is required. To sort out this matter, innovative method gastroretentive drug delivery systems are incorporate.

FIGURE 2: RATIONALE FOR THE USE OF GRDDS11 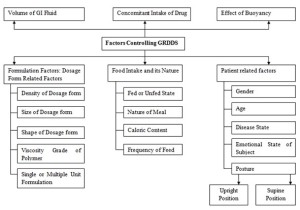 Approaches for GRDDS: The following methods have been devised to improve period of retainment of oral dosage form in the stomach viz. floating system, swelling and expanding system, bioadhesive system, high density system and other delayed gastric emptying devices 10. It is shown in Figure 4 and classification of GRDDS is shown in Figure 5. 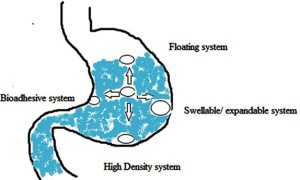 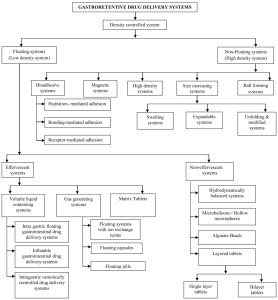 Mechanism of Floating Drug Delivery Systems: The slow drug release is accompanied with requisite rate during the system flow on the gastric contents. The release is followed by removal of the residual system from the stomach. But, along with the appropriate level of floating force (F), minimum levels of gastric contents are needed to permit achievement of buoyancy retention principle and also to keep dosage form buoyant over meal surface. In the literature an apparatus has been described that measures the kinetics of floating force. Its operation constitutes of measuring a force equivalent to F (with respect to time) which keeps the object submerged.

As depicted in Figure 6, the presence of force F in a higher positive side makes the object flow better. This apparatus optimizes FDDS and prevents its drawbacks unforeseeable intragastric buoyancy capability variations, related to stability and durability 22.

Based on the buoyancy mechanism, floating systems are classified as follows:

CONCLUSION: Gastroretentive drug delivery system have emerged as an efficient means of prolonged retaining ability in the stomach and thereby increase gastric residence time of drugs and also improves bioavailability of drugs. Inspite of number of difficulties to be worked out to achieve prolonged gastric retention, a large number of companies are focussing towards commercializing this technique. Number of commercial products and patents issued in this field are evident of it.

ACKNOWLEDGEMENT: We would like to express our heartfelt thanks to our beloved parents for their blessings, our teacher’s and friends/classmates for their help and wishes for the successful completion of this review article.

DECLARATION OF INTEREST: The author reports no declaration of interest.