ABSTRACT: Hollow microballoons (microspheres) are spherical empty particles without core. Microballoons (Hollow microsphere) are a drug delivery system that promises to be a potential approach for gastric retention. Microballoons drug-delivery systems are based on a non-effervescent system containing empty particles of spherical shape without core ideally having a size less than 200 micrometers. Microballoons drug delivery systems have shown to be of better significance in controlling the release rate for drugs having site-specific absorption. The floating microballoons showed gastro retentive controlled release delivery with efficient means of enhancing the bioavailability and promises to be a potential approach for gastric retention. Optimized hollow microspheres will find the central place in novel drug delivery, particularly in safe, targeted and effective in-vivo delivery promises to be a potential approach for gastric retention. They are gastro retentive drug-delivery systems, which provide controlled release properties. The advantages, limitations, methods of preparation of hollow microsphere, applications, polymers used in hollow microspheres, characterizations of microballoons and formulation aspects with various evaluation techniques and marketed products are covered in detail.

INTRODUCTION: Oral administration of drug is most preferred type of route of drug administration 1. In-vivo performance of drug delivery systems can be affected by gastric emptying and frequent dosing of these drugs is required to achieve suitable therapeutic activity 2. Microballoons are gastro retentive drug-delivery systems with the non-effervescent approach. Microballoons (Hollow microsphere) are in a strict sense, empty particles of spherical shape without a core. These microspheres are characteristically free-flowing powders comprising of proteins or synthetic polymers, ideally having a size less than 200 micrometers 6.

To overcome the impact of gastric emptying a controlled drug delivery system with prolonged residence time in the stomach can be of importance for drugs with an absorption window in the upper small intestine 3. Gastro retentive drug delivery is an approach to prolong gastric residence time, thereby targeting site-specific drug release in the upper gastrointestinal tract (GIT) for local or systemic effects. Gastroretentive dosage forms can remain in the gastric region for long periods and hence significantly prolong the gastric retention time (GRT) of drugs. Floating Drug Delivery Systems (FDDS) or hydrodynamically balanced systems are among the several approaches that have been developed in order to increase the gastric residence time of dosage forms. FDDS is useful for drugs acting locally in the proximal gastrointestinal tract and it has a bulk density lower than gastric fluids and thus remains buoyant in the stomach for a prolonged period of time, without affecting the gastric emptying rate. While the system floats on gastric contents, the drug is released slowly at a desired rate from the system. After the release of the drug, the residual system is emptied from the stomach. This results in an increase in gastric retention time and better control of fluctuations in plasma drug concentrations. The systems are also used for poorly soluble drugs or unstable in intestinal fluids 4.

Microballoons are considered as one of the most favorable buoyant systems with the unique advantages of multiple unit systems as well as better floating properties, because of central hollow space inside the microsphere. The novel techniques involved in their preparation include simple solvent evaporation method, emulsion-solvent diffusion method, single emulsion technique, double emulsion technique, phase separation coacervation technique, polymerization technique, spray drying and spray congealing method and hot melt encapsulation method. The slow release of drugs at the desired rate and better-floating properties mainly depend on the type of polymer, plasticizer and the solvents employed for the preparation. Polymers such as polylactic acid, Eudragit® S and hydroxypropyl methylcellulose, cellulose acetate are used in the formulation of hollow microspheres, and the release of the drug can be modulated by optimizing polymer concentration and the polymer -plasticizer ratio 5.

Hollow microspheres / microballoons loaded with the drug in their outer polymer shell are prepared by a novel method such as solvent evaporation or solvent diffusion/evaporation to create a hollow inner core. The drug and an enteric acrylic polymer mixture is dissolved in ethanol/dichloromethane solution and it is poured into an agitated solution of Poly Vinyl Alcohol (PVA) that as thermally controlled at 40 ºC. After the formation of stable emulsion, the organic solvent is evaporated from the emulsion by increasing the temperature under pressure or by continuous stirring. The gas phase is generated in the droplet of the dispersed polymer by the evaporation of dichloromethane and thus formed the hollow internal cavity in the microsphere of the polymer with the drug. The micro balloon continuously floats over the surface of an acidic dissolution media containing surfactant for more than 12 h 7. Once formulated these microballoons are generally characterized for its quality and efficacy by using different methods including, percentage yield, compatibility studies, micromeritic properties, in-vitro buoyancy, scanning electron microscopy, in-vitro drug release studies, data analysis of release studies, swelling studies, in-vivo studies and entrapment efficiency etc.

Mechanism of Drug Release: Microballoon comes in contact with gastric fluid the gel formers, polysaccharides and polymers hydrate to form a colloidal gel barrier that controls the rate of fluid penetration into the device and consequent drug release. As the exterior surface of the dosage form dissolves, the gel layer is maintained by the hydration of the adjacent hydrocolloid layer. The air trapped by the swollen polymer lowers the density and confers buoyancy to the microspheres/ microballoon.

TABLE 2: EXAMPLE OF VARIOUS AGENTS USED FOR FORMULATION OF MICROBALLOON

Methods of Preparation of Microballoons:

A. Solvent Evaporation Method: In this method, a polymer is dissolved in an organic solvent and the drug is either dissolved or dispersed in the polymer solution. The solution containing the drug is then emulsified into an aqueous phase containing suitable additive (surfactants/polymer) to form oil in water emulsion after the formation of a stable emulsion, the organic solvent is evaporated either by increasing the temperature under pressure or by continuous stirring. The solvent removal leads to polymer precipitation at the oil/water interface of droplets, forming cavity and thus making them hollow to impart the floating properties. The polymers for the development of such systems include Eudragit, HPMC K4M and ethyl cellulose etc. Polymers are mixed with drugs and further this mixture is dissolved in the solution of ethanol, acetone or dichloromethane either alone or in combination to get homogenous polymer solution. The resulting solution is poured into 100 mL of liquid paraffin rotating at 1500 rpm. The emulsion is formed and heated at 35 ºC temperature for 3hr. After the formation of a stable emulsion, the acetone or dichloromethane is completely evaporated and resulting solidified microballoons are filtered using Whatman filter paper. This hollow microballoons imparts the floating and sustained properties 24.

B. Emulsion Solvent Diffusion Method: In the solvent diffusion method the affinity between the drug and organic solvent is stronger than that of organic solvent and an aqueous solvent. The drug is dissolved in the organic solvent and the solution is dispersed in the aqueous solvent producing the emulsion droplets even though the organic solvent is miscible. The organic solvent diffuses gradually out of the emulsion droplets into the surrounding aqueous phase and the aqueous phase diffuse into the droplets by which drug crystallizes. The mixture of drug-polymer is dissolved in the solution of ethanol: dichloromethane and this mixture are adding dropwise to polyvinyl alcohol solution. This solution is stirred at 1500 rpm for 1 h and at different temperature ranges. By changing the polymer concentration in the co-solvent and the ratio of ethanol to dichloromethane, it is possible to prepare microballoons with various drug contents 25.

C. Solvent Diffusion-Evaporation Technique: This technique is with a slight modification of both the emulsion solvent evaporation method and the emulsion solvent diffusion method. Drugs, polymers and 0.1% of a surfactant such as PEG are mixed in the solution of ethanol: dichloromethane (1:1) at room temperature. This solution is slowly introduced into 80 ml of 0.46% w/w of polyvinyl alcohol as an emulsifier. This is stirred using propeller agitator for 1 h for evaporation of organic solvents and then filtered it 26. 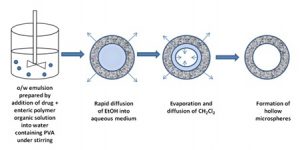 D. Spray Drying: Spray drying is the most widely employed industrial process for particle formation and drying. It is an ideal process where the required particle size distribution, bulk density and particle shape can be obtained in a single step 27.

Where M = weight of beads

5. Scanning Electron Microscopy: 8 Dry hollow microspheres are placed on an electron microscope brass stub a coated with gold in an ion sputter. Then pictures of microsphere are taken by Spectro random scanning of the stub. The microspheres are viewed at an accelerating voltage of 20KV. Scanning electron microscopy was performed to characterize the surface of formed microspheres. The samples for SEM were prepared by lightly sprinkling the microballoons on a double-adhesive tape stuck to an aluminum stub. The stubs were then coated with gold to a thickness of about 300 Å under argon atmosphere using a gold sputter module in a high-vacuum evaporator. The samples were then randomly scanned using a Scanning Electron Microscope and photomicrographs were captured.

6. In-vitro Drug Release Studies: 30 The release rate of hollow microspheres is determined in a United States Pharmacopoeia (USP) basket type dissolution apparatus. A weighted amount of floating microballoons equivalent to 75 mg of the drug is placed in screening medium having smaller mesh size than the microballoons. The mesh is then tied with a nylon thread to avoid the escape of any microballoons and a glass bead used in the mesh to induce the sinking of microballoons in the dissolution medium. The dissolution test was performed in 900 mL medium at 100 rpm; at specified time intervals, aliquots are to be withdrawn, filter, dilute with the same medium and assay using a UV double-beam spectrophotometer.

9. In-vivo Studies: The in-vivo studies are performed on suitable animal models example such as a rat, beagle dogs, etc. The floating behavior can be investigated by radiographical studies using barium sulphate microballoons.33

10. Entrapment Efficiency: Microballoons containing drug equivalent to 100 mg are digested in a 10 mL mixture of dichloromethane and methanol (1:1 v/v). The mixture is to be placed in the centrifuge at 3000 rpm for 3 min and 1 ml of supernatant is then withdrawn and after suitable dilution, with distilled water, it is assayed spectrophotometrically. The percentage drug entrapment is calculated from the equation given below.

CONCLUSION: In the present review, we have briefed the potential of Microballoon in the gastro retentive drug delivery system. Due to low-density, sufficient buoyancy to float over-gastric contents and remain in the stomach for prolonged period microballoon are of practical importance in the gastro retentive drug delivery system. From the pharmaceutical aspect, further developments and research is needed to achieve better product quality by formulating floating microballoons. Floating micro-balloons have the advantage that they remain buoyant and distributed uniformly over the gastric fluid to avoid the variations of gastric emptying and release the drug for prolonged periods of time.

The micro-balloons are characteristically free-flowing powders consisting of proteins or synthetic polymers, ideally having a size less than 200 micrometers. The micro-balloons are prepared by solvent diffusion and evaporation methods to create the hollow inner core. The micro-balloons can be evaluated for surface morphology, flow properties, buoyancy, yield, percent drug loading, in-vitro release, stability at gastric pH and FT-IR studies. The floating micro-balloons are promising candidates for the development of a gastro retentive drug delivery system for potential therapeutic use.

ACKNOWLEDGEMENT: Authors are thankful to the Principal, Teaching, Non- Teaching Faculty and the Management of Dr. Vithalrao Vikhe Patil College of Pharmacy as well as members from Bhagwant University for their support for carrying out the study.