ABSTRACT: Superporous hydrogels (SPHs) were developed to retain the drug in the gastric medium. These systems swell very rapidly in the stomach and maintain their integrity for longer time even in the acidic environment of stomach, while releasing the pharmaceutical active ingredient. The present work focuses on concept of development of superporous hydrogel tablets of Dexlansoprazole, their comparativeness to the marketed delayed release dosage forms. The aim of this study was to prepare Gastroretentive dosage form based on SPH using Dexlansoprazole, a proton pump inhibitor as a model drug for swelling & prolonged drug release characteristics in acidic pH. The formulation is based on preparation of third generation SPHs with three different polymers, such as, sodium alginate, pectin, chitosan and acrylic acid were used with different concentrations by crosslinking technique using formaldehyde as cross linking agent to get the desired sustained release profile over a period of 8-12 hrs. The characterization studies for SPH were performed by measurement of apparent density, porosity, swelling studies, mechanical strength, scanning electron microscopy (SEM) and FT-IR. All formulations were evaluated for stability, drug content, and kinetic drug release & in-vitro drug release profile. It was concluded that the proposed gastroretentive drug delivery system based on SPHs is promising for stomach specific delivery of Dexlansoprazole.

INTRODUCTION: Hydrogels have long been established in this field to control the release of a drug from a conventional solid dose formulation. It gradually swells in the aqueous medium and controls drug release by both diffusion and erosion. These types of hydrogels are non-crosslinked and ultimately dissolve over time in the presence of sufficient water or the swelling medium 1, 2. Superporous hydrogels (SPHs) are porous hydrophilic crosslinked structures with the ability of absorbing aqueous fluids up to a few hundred times their own weight. Maximum swelling is generally reached in a fraction of a minute with SPHs having average pores of 200 mm in size 3. In the preparation of SPHs certain ingredients, including initiators, crosslinkers, foam stabilizers, foaming aids and foaming agents, are added into a water-diluted monomer. The foaming of SPHs is then driven by the interaction of acids and carbonates. For instance, acetic, acrylic and hydrochloric acids are commonly used with sodium, potassium and ammonium carbonates. Since the acid–carbonate interaction is only effective in aqueous media, the solution technique is the preferred method of polymerization in the preparation of SPHs 4, 5, 9.

The third generation superporous hydrogels are the SPH hybrid (wherein a water-soluble counterpart, a hybrid agent is employed) 5. Depending on the agent type and its associated treatment, various third generation SPHs can be created, ranging from high modulus to highly elastic and rubbery (in their water-swollen states). Water-soluble hydrocolloids, including sodium alginate, sodium carboxymethyl cellulose, pectin and chitosan, have been used alone or in combination as the preferred hybrid agents. Overall, these third generation SPHs are elastic superporous hydrogels having enhanced mechanical properties 5-11.

Dexlansoprazole is a proton pump inhibitor used as an antiulcer drug in the treatment and maintenance of healing of duodenal or gastric ulcers, erosive and reflux esophagitis, NSAID-induced ulcer, Zollinger-Ellison syndrome, and Barrett's esophagus 12, 13. It lasts longer than lansoprazole, to which it is chemically related, and needs to be taken less often, making it possible to better control gastric acid. It is active against Helicobacter pylori with a bioavailability of 80% or more and protein binding of 97%. Its half life is 1-1.5 hrs with poor absorption may be because of degradation and poor solubility 13. The solubility and absorption can be improved with an increase in the gastric residence time. Superporous hydrogels are a good alternative for providing gastroretentive drug delivery systems for therapeutic management of peptic ulcer 14.

Preparation of drug loaded SPHs: Hydrocolloid polymer solution (2%w/v) was prepared by stirring in 0.1M glacial acetic acid solution using a homogenizer until the chitosan dissolves in acid completely. A 10% w/w aqueous PVA solution was prepared and mixed to the polymer solution.  To this solution, 0.2 ml of formaldehyde solution (10% w/w of the dry weight of chitosan) was mixed. Further, 0.2 ml of tween 80 was added and mixed thoroughly followed by 50 mg of sodium bicarbonate. The prepared mixture was stirred well and kept aside overnight.

10 ml of 0.1 N HCL was taken. To this 20 mg of drug and 100 mg of superporous hydrogel were added and mixed for 1 h at 50°C. Then acetone of 2ml was added and the hydrogel was repeatedly washed with distilled water to remove any unreacted material. Further it was dried at 40°C for 24h, finally powdered and stored in a well closed container 15 -18. Different formulations are shown in Table 1.

Procedure for the preparation of superporous hydrogel tablets: 20 mg drug equivalent of drug loaded SPHs, microcrystalline cellulose and PVP (5% w/v solution), except magnesium stearate were weighed accurately and transferred to a clean mortar and pestle. The powder blend was mixed for 5 minutes after which magnesium stearate was added and mixed for few more minutes to ensure complete mixing. After obtaining a uniform blend, it was passed through sieve no 60. The prepared powder blend was compressed into tablets.

Swelling studies: Completely dried superporous hydrogel was weighed and then immersed in excess of 0.1 N HCl. At various time intervals, the hydrogel was removed from the solution, blotted to remove excess of medium and then weighed 16 -18. Swelling ratio was calculated according to the following equation:

Porosity measurement: Dried hydrogels were immersed overnight in absolute ethanol and weighed after excess ethanol on the surface was blotted. The porosity was calculated from the following equation:

Mechanical Properties: The tensile strength (T) of superporous hydrogel formulations, which is a measure of the stress necessary to cause diametral fracture of the compact, was determined from the mean data obtained from the hardness test carried out on the SPHs (n = 3) using the Mosanto hardness tester. The T values were computed from equation below,

Where, P is the load applied on the SPH that causes tensile fracture of the SPH of diameter, D, and t is the SPH thickness 19, 20.

Determination of drug content: A weight of superporous hydrogel containing 5 mg of drug in 100 ml volumetric flask was treated with about 10 ml 0.1 N HCl of pH 1.2 mixed well and made up to volume. The mixture was filtered and drug content was determined using UV-Vis spectrophotometer at 286 nm.

FT-IR spectroscopy: FT-IR spectroscopy was employed to ascertain the compatibility between the drug and the polymers. It was also used to investigate the chemical structure of the synthesized SPHs. The FTIR spectrum was recorded over the range of 400–4000 cm−1using KBr pellet method by Fourier-Transform Infrared (FT-IR) spectrophotometer, (Bruker- Alpha-T-1020).

Precompression characterization: Powder blend of Dexlansoprazole SPHs was evaluated for various physiochemical parameters. Bulk density, tapped density, angle of repose and powder flow studies of the different formulations were studied. The results are shown in Table 3.

Weight Uniformity Test: The 20 tablets were taken and their weight was determined individually and collectively on a digital weighing balance. The average weight of one tablet was determined from the collective weight. Test was performed as per Indian Pharmacopeia (IP) 2010 21.

Hardness: Hardness was determined by taking six tablets from each formulation, using a Monsanto hardness tester, which applies force to the tablet diametrically with the help of an inbuilt spring.

Sample comprising the tablets equivalent to 6.5 g were rotated at 25 rpm for 4 min. Tablets were reweighed after removal of fines (dedusted) and the percentage of weight loss was calculated. Friability below 1% was considered acceptable 21.

Compatibility studies: The FTIR studies revealed that there was no drug polymer interaction in any of the formulation as indicated by the principal FTIR peaks of the drug observed at wave numbers of 3176, 1581. 1402, 1257, 1113, 1007 and 669 cm-1 confirming the purity of the drug. FTIR spectrum of Dexlansoprazole in pure state is shown in Fig.1. Which was observed to be almost similar in all the formulations indicating no significant drug interactions. In the FTIR spectra of sodium alginate SPHs of Dexlansoprazole (F9) peaks were observed at 1581, 1403, 1039, 750 cm-1. 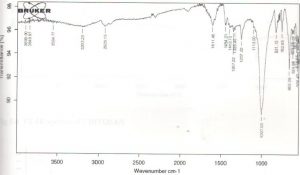 Kinetics of swelling is important because of the gel barrier formed with water permeation. Swelling is also a vital factor to ensure floating 23, 24. The swelling ratio was in the range 40.00 ± 0.12 to 74.50 ± 0.20. F6 formulation is having higher swelling index. The reason for higher swelling ratio value can be attributed to the work by channeling agent, which allows more penetration of water into the gel layer thereby enhancing the water penetration or retention property. This could be the reason for more water uptake by formulation from F4, F8 and F9 as shown in the Table 2.

Mechanical strength was measured in terms of tensile strength i.e, the measure of stress required to fracture the piece of formed SPH. To make the third generation superporous hydrogels for their effective applications, appropriate mechanical strength is necessesary. The results as shown in the Table 2 indicate that increase in amount of crosslinking agent increased the stress required for fracture, thus increasing the mechanical stability. The presence of PVA increased the overall crosslinking density of the superporous hydrogels by inducing additional PVA- polymer chains. This entanglement significantly improved the structural integrity of the hydrogel and decreased stress relaxation, which enhanced its ability to withstand pressure. Compared to other hydrocolloid polymers, sodium alginate gave most strong SPHs.

SEM studies revealed highly porous structure of Superporous hydrogels of F9 as shown in the Fig.2. 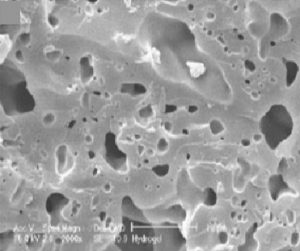 FIG. 2: SCANNING ELECTRON MICROGRAPHS OF SPHS OF SODIUM ALGINATE (F9). The magnification of the micrographs is ×200, and the scale bar indicates 10 µm.

The flow properties of the powder blend was found to be good for all formulations, as the angle of repose, carr’s index and hausner’s ratio were in good range. There were no flow problems (flow obstruction, segregation, irregular flow, flooding, etc) observed during the tests.

The Compressibility index (or carr’s index) and Hausner’s ratio are measures of the propensity of a powder or the measures of the powder ability to settle and they permit an assessment of the relative importance of inter-particulate interactions. In a free flowing powder, such interactions are less significant, and the bulk and tapped densities will be closer in value as seen in the results from Table 3. Good flow of powder blends ensures content uniformity and dose precision of tablets.

The tablets obtained by compression of powder blends containing SPHs of all formulations were found to have good hardness and acceptable % loss in friability test. The weight uniformity was also in acceptable range as per I.P 2010. The drug content in all the formulations were in agreeable quantities. The post compression evaluation results are illustrated in Table 4.

FIG. 3: %CUMULATIVE DRUG RELEASE VS. TIME GRAPH OF ALL FORMULATIONS

The in-vitro dissolution study was performed for all formulations and the results are shown in Table 5 and Fig. 3. In-vitro drug release studies showed that SPHs were the appropriate tool for extending the drug release. All formulations containing SPHs showed more than 8 hrs of drug release.

Drug release was found to be inversely related to the amount of crosslinking agent or low amount of hydrocolloid polymer where the openings are less and release is also low. Among all formulations, F9 showed extended release of drug upto 12 hrs.

The F9 was found to follow zero order kinetics with non-fickian diffusion type of mechanism of drug release since the value of n, the time exponent, calculated from this equation was found to be in between 0.45 to 0.89. In drug release profiles of all formulations except in F2 and F3, the release mechanism is assumed to be non-fickian.