ABSTRACT: The medicinal plants, Adhatoda vasica, and Adhatoda beddomei are commonly used in the treatment of several illnesses and respiratory disorders viz., cold, severe cough, chronic bronchitis, asthma and tuberculosis. The present study aimed to identify the phytochemical constituents and quantification of bioactive contents of hexane extracts of these plants, followed by metabolic fingerprinting, which was carried out by GC-MS analysis. Assessment of phytochemical screening showed the presence of various phytochemicals like glycosides, phytosterols, flavonoids, terpenoids, and phenols in hexane extract of A. vasica and A. beddomei. A rapid method has been used for the comparative study of A. vasica and its related plant species A. beddomei using gas chromato-graphy-mass spectrometry (GC-MS). The phytocompounds comparison in two plants by GC-MS was similar in 12 compositions. Squalene, β-sitosterol, tetratetracontane, and lupeol were the major constituents identified in the hexane extract of A. vasica and A. beddomei. The extracts showed the presence of several phytoconstituents, including bioactive components, and provide reference data for future research of its active constituents.

INTRODUCTION: Plants are a beneficial source in the discovery of novel herbal drugs or medicine 1. Herbal drugs have become very popular for the past few decades for its potency and powerful pharmacological activities such as antioxidants, enzyme inhibitors, immuno-suppressive, hypocholesterolemic, antiasthmatic, anticancer 2, etc.

Phytochemistry is the study of chemical or phytoconstituents which are derived from plants. These compounds are known as secondary metabolites, which are having various therapeutic properties and benefiting human health 1. Crude plants generally consist of mixtures of various chemical constituents. Amongst, secondary meta-bolites are extensively used to prepare the herbal formulations and their derived product 2. Phytochemical investigation plays a major role in the detection of bioactive phytocompounds 3.

Chromatographic techniques mainly contribute to novel drug discovery from herbal drugs, parti-cularly in the area of identification and isolation of phytoconstituents and its characterization 4.

Plant extract screening can be performed by chromatographic techniques such as gas chromatography (GC) hyphenated with mass spectrometric (MS) detection method. GC is one of the important chromatographic techniques used for the fast identification of phytochemicals since it allows the profiling of plant materials complex structures and precisely identify the compounds. Therefore, GC-MS offers a new methodology for finding the unknown components in the plant materials over effective separation abilities of GC and specific structural elucidation by MS.

Adhatoda vasica Nees (Acanthaceae) is widespread throughout the temperate regions of South Asia, used for more than 3000 years in Indian traditional medicine for the prevention, management, and treatment of several illnesses and respiratory disorders viz., cold, severe cough, chronic bronchitis, asthma and tuberculosis 5, etc. It is commonly known as vasaka or malabar nut tree. Adhatoda beddomei CB Clarke is one of the species of Adhatoda called vasa or adalodakam in Tamil, rarely distributed in Western Ghats of Kerala and Tamil Nadu and used in Ayurveda, the ancient Indian System of Medicine (ISM) 6. It has been the choice for the treatment and management of several diseases such as fever, cough, asthma, bronchitis, leprosy, blood disorders, heart troubles, inflammation, jaundice, tumors, and tuberculosis 7, 8. The scientific literature revealed that plants in the genus Adhatoda mainly comprised of chemicals belong to such as alkaloids, tannins, saponins, phenolics, flavonoids and fatty acids that are beneficial to human health 9, 10.

However, both plants are closely related to each other and have similar morphological characteristics. In order to intensively elucidate the major difference in the chemical constituents between two species and control the quality of medicinal plants. In our approach, we developed a method to compare the chemical profiles of phytoconstituents established on gas chromato-graphy-mass spectrometry (GC-MS) study to demonstrate the difference in the chemical composition of two species.

Plant Material: A. vasica (AV) and A. beddomei (AB) leaves were collected from Gingee Hills, Villupuram (Dt) and Chengalpattu, in the month of October 2017. The plants were authenticated by Prof. P. Jayaraman (Botanist), Plant Anatomy Research Centre (PARC), Tambaram, Chennai, Tamil Nadu, India, with a reference number of A. vasica and A. beddomei was PARC/2018/3653 and PARC/2018/3654 respectively. The plant specimens were preserved in the Herbarium at Interdisciplinary Institute of Indian System of Medicine (IIISM), SRM Institute of Science and Technology, Kattankulathur, Kancheepuram, Tamil Nadu, India. Collected leaves were cleaned with running tap water, dried under shade and powdered using cutter mill, sieved through 60 mesh sieve and stored in an airtight container at room temperature.

Preparation of Hexane Extracts: The powdered leaves of each plant (100 g) were extracted in 250 mL of hexane for 72 h at room temperature and repeat the process to complete the extraction. Further, the extracts were filtered, evaporated to dryness under reduced pressure using a rotary vacuum evaporator, and the samples were analyzed by GC-MS. The percentage yield for hexane extracts obtained from the A. beddomei and A. vasica was 0.42% w/w and 0.56% w/w, respectively.

Identification of Compounds: Interpretation of GC-MS spectrum was achieved by NIST (National Institute Standard and Technology, Gaithersburg, MD, USA) database 2005. The spectra of unknown compounds were correlated with that of known compounds reserved in the NIST library.

RESULTS AND DISCUSSION: Adhatoda vasica and Adhato dabeddomei are popular Indigenous System of Medicine (ISM) in India and popular drugs in Ayurveda and Unani belong to the family Acanthaceae 21, 8. The therapeutic properties of the plants attribute to their bioactive compounds like alkaloids viz., vasicine, deoxyvasicine and vasicinone 22 glycosides, flavones, triterpenes, polysaccharides, vitamin C, polyphenols, proteins, quinines, coumarins and essential oils 23. Vasicine is a major principle constituent of Adhatoda species.

After successful extraction of the plant materials in the investigation, the preliminary phytochemical screening revealed that the hexane extracts of A. vasica and A. beddomei contains glycosides, phytosterols, flavonoids, terpenoids, and phenols. Alkaloids and saponins were absent in hexane extract of A. beddomei, whereas the results were positive in A. vasica, as summarized in Table 1.

TABLE 1: PRELIMINARY PHYTOCHEMICAL SCREENING OF HEXANE EXTRACTS OF A. VASICA AND A. BEDDOMEI

The bioactive content of total phenolic, flavonoid, alkaloid, glycoside, sterol, saponin, and terpenoids were determined in the hexane extracts of A. vasica and A. beddomei and the results were depicted in Table 2 and Fig. 1. The content of total phenols in the extract expressed as gallic acid equivalents varied between A. vasica and A. beddomei (6.15 mg/g and 4.73 mg/g, respectively) of dry extract. As shown in the table, phenol content was high in the hexane extract of A. vasica than A. beddomei.

TABLE 2: DETERMINATIONS OF TOTAL PHENOLIC, FLAVONOID, ALKALOID, GLYCOSIDE, STEROID, SAPONIN AND TERPENOID CONTENTS (mg/g) IN A. VASICA AND A. BEDDOMEI 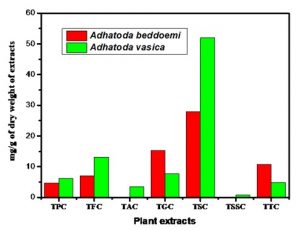 TABLE 3: MAJOR COMPOUNDS IDENTIFIED IN THE HEXANE EXTRACT OF A. VASICA LEAVES 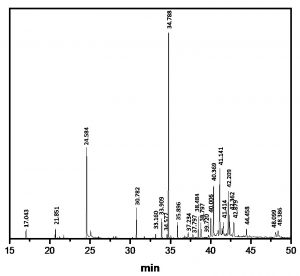 FIG. 2: GC-MS CHROMATOGRAM OF HEXANE EXTRACT OF A. VASICA

TABLE 4: MAJOR COMPOUNDS DETECTED IN THE HEXANE EXTRACT OF A. BEDDOMEI LEAVES 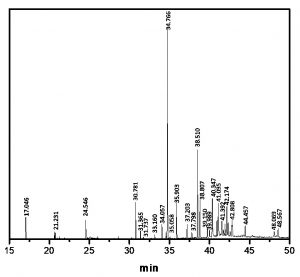 FIG. 3: GC-MS CHROMATOGRAM OF HEXANE EXTRACT OF A. BEDDOMEI

The comparison of the constituents obtained from these plants by GC-MS was similar in 12 compositions, as illustrated in Fig. 4. However, squalene, β-sitosterol, tetratetracontane and lupeol were the predominant in the constituents of Adhatoda species. Two compounds, campesterol and methyl commate D were observed in A. beddomei extracts which possess various therapeutic properties viz., antioxidant 24 and antifungal and larvicidal activity 25, 26 whereas vasicolinone and amorphane-B, were detected only in A. vasica extract, amongst vasicolinone reported to have antitubercular activity 27 and amorphane-B reported to possesses antibacterial activity 28. The structure of the compounds which were present in A. vasica and A. beddomei were displayed in Fig. 5 and Fig. 6, respectively. A. vasica showed the highest distribution of the secondary metabolites when compared to A. beddomei. Based on the presence of the detected compounds, the hexane extracts of A. vasica and A. beddomei may find potential applications in the herbal and pharmaceutical industries. 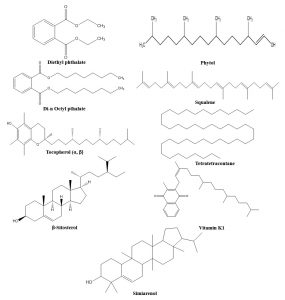 FIG. 4: COMPOUNDS PRESENT IN THE HEXANE EXTRACT OF A. VASICA AND A. BEDDOMEI

FIG. 5: COMPOUNDS PRESENT IN HEXANE EXTRACT OF A. VASICA A) VASICOLINONE; B) AMORPHANE-B

FIG. 6: COMPOUNDS PRESENT IN HEXANE EXTRACT OF A. BEDDOMEI A) CAMPESTEROL; B) METHYL COMMATE-D

Further investigation may lead to the isolation, characterization of bioactive compounds, and their pharmacological screening will be helpful for drug development.

N. Sundaresan and I. Kaliappan *