ABSTRACT: The present study was carried out to characterize the bioactive phytoconstituents from the fractions of F. elephantum fruit and to evaluate their in-vitro anti-diabetic activity. Column chromatography of methanol extract of F. elephantum fruit yielded  Hexane: Ethyl acetate (1:1 v/v) fraction (HEFE), Ethyl acetate fraction (EFE) and Ethyl acetate: Methanol (1:1 v/v) fraction (EMFE), which were subjected to GC-MS analysis. They were also tested for in-vitro α-amylase and α-glucosidase inhibitory potential. GC-MS analysis of EFE predominantly showed 2,5-Furandione, dihydro-3-methylene; n-Hexadecanoic acid; 5-Eicosene,(E)-; cis-13-Octadecenoic acid; and γ-Sitosterol; 2,5-Furandione, dihydro-3-methylene-; cis-Aconitic anhydride; Ethanol, 2,2'-[(1-methylethyl)imino]bis-; and Propanedioic acid, ethyl-, diethyl ester; were the major compounds in EMFE. HEFE showed 2,5-Furandione, dihydro-3-methylene (18.5%), Dodecanoic acid (4.48%), n-Hexadecanoic acid (15.18%) and cis-13-Octadecenoic acid (18.95%) which are biologically active. Moreover, the α-amylase IC50 values of HEFE, EFE, and EMFE were 68.77, 52.59, and 40.28 μg/mL, respectively, while that of acarbose was 41.99 μg/mL. And the α-glucosidase IC50 values of HEFE, EFE, and EMFE were 69.53, 35.08, and 42.49 μg/mL, respectively, which were comparable to that of acarbose (39.21 μg/ml). Findings of the present study clearly indicate that F. elephantum fruit possesses numerous bioactive components and potential in-vitro antidiabetic activity, thus justifies the use of this plant for different ailments by traditional medical practitioners.

INTRODUCTION: Plants produce an extensive range of bioactive phytochemical compounds with significant applications in different sectors. These compounds occur naturally in small quantities and are considered as secondary plant metabolites with pharmacological or toxicological properties in living organisms 1. Among the secondary metabolites, polyphenolic compounds have a wide range of biological and physiological activities and serve as chemotaxonomic marker compounds 2.

Feronia is a monotypic genus belonging to the family Rutaceae. Feronia elephantum correa (Limonia acidissima Linn, Schinus limonia Linnor Feronia limonia) is a moderate-sized tree whose parts such as fruits, leaves, root, bark, and gums have been used in traditional medicine for many ailments. The fruit (wood apple) contains flavonoids, saponins, glycosides, tannins, and some coumarins and tyramine derivatives 3. Wood apple is a dry land fruit, which is a nutritious, rich in natural acids such as oxalic, tannic, mallic, and citric acid.

It is a source of calcium, phosphorus, iron and vitamins A, B and C. Seeds and fruits contained oil and protein; oil composed of palmitic, oleic, linoleic and linolenic acids besides traces of palmitoleic and stearic acids; β-sitosterol, β-amyrin, lupeol and stigmasterol from unsaponifiable matter of seed oil. Fruit pulp has been reported for glycoside - 5,4-dihydroxy-3-(3-methyl-but-2-enyl) 3,5,6-trimethoxyflavone7 O-b-D-glucopyranoside 4. According to Ayurveda, the fruits are used for heart diseases (cardiotonic), cough, vomiting, dysentery, removes biliousness, “tridosah”, “vata”, and blood impurities, thirst, fatigue, hiccough; tumors, asthma, leucorrhoea, ophthalmia. In Yunani, the fruits are cardiotonic, tonic to the lungs and the liver, diuretic, strengthening the gums; the juice is good for sore throat and stomatitis. The fruit pulp is also used by tribal of Rewa District of Madhya Pradesh against diabetes, boils and amoebiosis 5, and hence is regarded as one of the most valuable medicinal plants in India.

To the best of our knowledge, there have not been any earlier reports on fractions from the fruits of this plant. However, as part of our search for new natural products and bioactive compounds, an investigation of α-glucosidase and α-amylase inhibitory activity of crude methanolic and aqueous extracts of F. elephantum fruit was undertaken. We herein aim to examine the phytochemical constituents of different fractions of F. elephantum and their in-vitro antidiabetic activity using α-amylase and α-glucosidase inhibitory assay.

Phytochemical Analysis of Bioactive Fractions using Gas Chromatography-Mass Spectrometry (GC-MS): GC-MS analysis of the fractions of F. elephantum viz., HEFE, EFE, and EMFE was carried out using GC (Agilent 7890A) with DB 5 Ms Column (30m L × 0.25mm ID × 0.25um film thickness). Helium (99.9995%) was used as carrier gas (flow rate 1 mL/min), and an injection volume of 1 μL was employed in a splitless mode. The injection temperature was 250 °C, and the auxiliary temp was 290 °C. Mass Spectrophotometer (5975C MSD) with Electron Impact Ionization and Quadrupole Mass Analyzer was used with the Scan Mass range of 30m/z to 700m/z. The MS source temperature was 250 °C, and the MS quad temperature was 180 °C in Table 1.

Sample Preparation: Given a sample made up to 2 mL with the respective solvent. It again diluted with 20 μL in 980 μL of solvent and injected 1uL into the GCMS instrument.

The phytoconstituents of HEFE, EFE, and EMFE were identified by comparison of mass spectra with the national libraries (NIST - 11). The molecular formula, molecular weight, and structure of the identified compounds were ascertained.

In-vitro α-Amylase Inhibitory Activity: The α-amylase inhibitory potential of all fractions was evaluated using 3, 5-dinitrosalicylic acid (DNSA) which is based on the spectrophotometric method using acarbose as standard reference 6. Stock solutions (500 µg /mL in distilled water) of HEFE, EFE, EMFE, and positive control, acarbose were prepared.500 μL of different concentrations (10, 20, 40, 80 and 160 µg/mL) of each sample were added to a 500 μL solution of α-amylase (0.5 mg/mL in 0.02 M,pH 6.9 sodium phosphate buffer) and was incubated for 10 min. Then add 500 μL of starch solution 1% (w/v) and incubate for 10 min at 25 °C.

The coloring reagent, DNSA (1 mL)was added, and heat the reaction mixture in a boiling water bath for 5 min, cool to room temperature. Then dilute it with 10 mL of distilled water and measure the absorbance at 540 nm using a UV-VIS spectro-photometer (ELICO SL159). A blank solution was prepared by substituting the α-amylase enzyme solution with 500 μl of sodium phosphate buffer. The tests were repeated thrice with the same protocol.

Method for Calculation of α-amylase and α-Glucosidase Inhibitory Concentration (IC50): The percentage of enzyme inhibition was calculated using the formula:

Characterization of the Phytochemical Compounds of HEFE, EFE and EMFE using GC-MS: Three fractions were separated from methanol extract of F. elephantum fruit viz., HEFE, EFE, and EMFE. GC-MS analysis of HEFE, EFE, and EMFE revealed the presence of various complex compounds. GC-MS analysis of EFE shown 2,5-Furandione, dihydro-3-methylene (44.78%), n-Hexadecanoic acid (6.62%), 5-Eicosene, (E)- (4.04%), cis-13-Octadecenoic acid (6.08%) and γ-Sitosterol (2.99) as prominent compounds as presented in Fig. 1 along with other phytoconstituents, as reported in Table 2.

GC-MS profiling of HEFE shown different compounds as presented in Table 4, out of which the prominent constituents with predominant peak area, as shown in Fig. 3 are 2,5-Furandione, dihydro-3-methylene (18.5%), Dodecanoic acid (4.48%), n-Hexadecanoic acid (15.18%) and cis-13-Octadecenoic acid (18.95%) which are biologically active. Other important bioactive compounds present in the fractions of F. elephantum fruit are L-Glutamic acid, dimethyl ester; E-15-Hepta-decenal; Phenol, 2, 4-bis (1, 1- dimethylethyl; cis-Linaloloxide; citric acid; 6-Isopropenyl-4, 8a-dimethyl-1,2,3,5,6,7,8,8a-octa-hydro-naphthalen-2-ol; 9,12-Octadecadienoic acid (Z,Z)-; Dichloro-acetic acid, heptadecyl ester etc., which have been reported for anti-oxidant, antiinflammatory, hypo-cholesterolemic, anti-diabetic, anti-cancer, anti-microbial, antitubercular, antibacterial, antifungal activities which are represented in respective tables. These bioactive compounds are reported for the first time in the fractions of F. elephantum fruit through the present study. 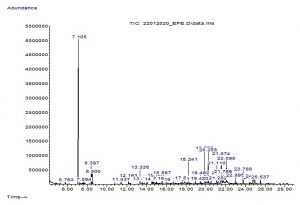 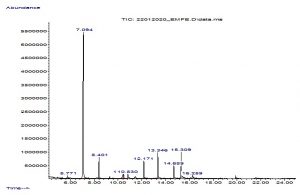 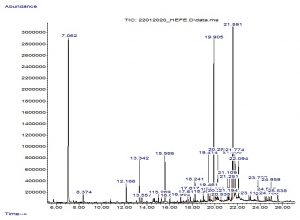 TABLE 2: PHYTOCONSTITUENTS IDENTIFIED FROM EFE BY GC-MS ANALYSIS AND THEIR REPORTED BIOLOGICAL ACTIVITIES

TABLE 3: PHYTOCOMPONENTS IDENTIFIED FROM EMFE BY GC-MS ANALYSIS AND THEIR REPORTED BIOLOGICAL ACTIVITIES

TABLE 4: PHYTOCOMPONENTS IDENTIFIED FROM HEFE BY GC-MS ANALYSIS AND THEIR REPORTED BIOLOGICAL ACTIVITIES

In-vitro α-amylase Inhibitory Activity of HEFE, EFE and EMFE: Three fractions viz., HEFE, EFE, and EMFE were screened at different doses for in-vitro α-amylase inhibitory potential, which might be deduced to perceive their antidiabetic potential. The results showed a concentration-dependent rise in the percentage inhibitory activity against the α-amylase enzyme, as represented in Table 5. HEFE, EFE, and EMFE at the maximum tested concentration, 160 μg/mL showed a percentage inhibition of 90.21, 91.65 and 97.53 respectively, while acarbose showed 95.06, which infers the inhibitory potential of fractions is comparable to that of standard reference, acarbose.

The IC50 values of HEFE, EFE, and EMFE were 68.77, 52.59, and 40.28 μg/mL, respectively, while that of acarbose was 41.99 μg/mL. Since α-amylase plays a vital role in starch absorption in human beings and animals, the presence of such inhibitors in plant extracts or foodstuffs may be responsible for impaired starch digestion and thus anti-hyperglycemic effect 29.

In-vitro α-glucosidase Inhibitory Activity of HEFE, EFE and EMFE: The obtained results showed a dose-dependent escalation in the percentage inhibition of α-glucosidase enzyme as depicted in Table 5. HEFE, EFE, and EMFE at the highest tested concentration, 160 μg/mL showed a percentage inhibition of 89.34, 93.70 and 94.38, respectively, which were comparable to that of standard drug acarbose with 90.65. The IC50 values of HEFE, EFE, and EMFE were 69.53, 35.08 and 42.49 μg/mL, respectively, which were comparable to that of acarbose (39.21 μg/ml), however, there was a significant difference between the IC50 of acarbose and HEFE. The α-glucosidase inhibitory effect exhibited by all the fractions indicates their potential effectiveness at managing Diabetes Mellitus, possibly by reducing postprandial glycemic levels and the total range of postprandial glucose levels 30.

These results indicate that F. elephantum fruit could be used to reduce post-prandial blood glucose levels and may be of worth as novel therapeutic agents in the treatment of Diabetes Mellitus.

All determinations were carried out in the triplicate manner, and values are expressed as the mean ± SEM

This present work discloses the goodness of F. elephantum with numerous bioactive components, potential in-vitro antidiabetic activity, and other earlier reported biological activities justifies the use of this plant for different ailments by traditional medical practitioners. However, isolation of specific phytoconstituents and studying their biological activity will certainly give productive results.

ACKNOWLEDGEMENT: The authors thank the Department of Science and Technology (DST), New Delhi, for providing support under the FIST Program of DST [SR/FST/COLLEGE-280]. The authors are also thankful to Mass Spectrometry Facility, Division of Biological Sciences, Indian Institute of Science, Bengaluru for GC-MS characterization.