ABSTRACT: The present study has been designed to evaluate the bioactive compounds and cytotoxic activity from the n-hexane fraction of methanolic extract of Antigonon leptopus flowers. The n-hexane fraction was analysed by GC-MS (Thermo GC-TRACE ultra ver.: 5.0, Thermo MS DSQ II) which revealed the presence of many diversified compounds including flavonoids, Vitamin D2 derivative, carbohydrates, amino acids, quinazolines etc. All the compounds were identified from Wiley spectral library. Mass spectral data of 16 compounds is presented.  The in vitro cytotoxic activity of n-hexane fraction of the methanolic extract was performed by MTT assay method against CHOK 1cell line (Chinese Hamster Ovary cell line) and A-549 cell line (Human Lung adenocarcinoma epithelial cell line).Under the experimental conditions the cytotoxic property was not observed for n-hexane fraction. From the results it is evident that Antigonon leptopus flowers contain various medicinally active phytocomponents .The absence of cytotoxic activity against CHOK 1cell line and A-549 cell line recommends the safety of the Antigonon leptopus flowers

INTRODUCTION: The value of natural products in the treatment of ailments is well-known. Amongst the various natural sources, plants are an important source of bioactive constituents, including anticancer, antifungal and antimicrobial drugs. More than 1000 plant species are known for their anticancer potential. The use of plant compounds as prototypes of new drugs has a historical and economic importance.

Some plants extracts were defined as effective in treating cancer, whose action is attributed to additional or synergistic effect of compounds present in the extract 1. In consequence, the cytostatic effect of the extract observed in tumor cells seems to be more effective than the effect of isolated and biologically active compounds 2.

Antigonon leptopus Hook (polygonaceae) is well known in India as garden creeper, picchi batani in Telugu. A. leptopus is a tender perennial vine which can easily grow to 30‐40 ft. in length. The coral vine has attractive green heart shaped leaves 3. The coral vine is found in costal and Indian Ocean areas. The hot tea prepared from the aerial portion of this plant is used traditionally for the prevention and treatment of cough and flu-related pain 4. In Thailand, flour coated leaves and flowers of A.leptopus, are served with noodles. The flowers are also used in omelets5. Phenols, saponins, aminoacids, steroids, phytosterols, triterpenoids, sapogenis, tannins, xanthoprotein, carboxylic acid and coumarins were present in the methanolic extract of A. leptopus flowers. Studies have also shown that A. leptopus methanolic flower extract exhibited antibacterial6, anti-thrombin7, anti inflammatory8, anti-diabetic9  and lipid peroxidation inhibitory activities 10. But there is no report about the phytochemical analysis by GC-MS and cytotoxic activity on the methanolic flower extract of A. leptopus. With this background the present study was aimed to explore the bioactive compounds and cytotoxic activity of methanolic flower extract of A. leptopus.

450g fresh flowers of the plant Antigonon leptopus were washed with distilled water to remove dust particles. The shade dried flowers were powdered. The ground fine powder (135g) of the flowers was extracted with absolute methanol (1liter) at room temperature (300C) for three days. The extract was filtered through whatman no: 1 filter paper and then concentrated at 450C using a rotary vacuum evaporator.

This process was repeated thrice to obtain sufficient quantity of absolute methanol extract. The methanol extract (10g) was dissolved in distilled water and then fractionation was performed by using different polarity based solvents and n-hexane (3g), chloroform (3g), ethyl acetate (2g) and n-butanol (2g) fractions were obtained. All these obtained extracts and fractions were stored at -40C till further analysis.

The GC/MS analysis of n-hexane fraction of methanolic flower extract was performed on a GC-MS equipment (Thermo Scientific Co. Thermo GC-TRACE ultra ver.: 5.0, Thermo MS DSQ II. Experimental conditions of GC-MS system were as follows: TR 5-MS capillary standard non-polar column, dimension: 30Mts, ID: 0.25 mm, Film thickness: 0.25µm. Flow rate of mobile phase (carrier gas: He) was set at 1.0 ml/min. In the gas chromatography part, temperature programme (oven temperature) was 75°C raised to 250°C at a rise of 5°C/min, and held for 30min.  The injection volume was 1 µl and sample was injected in split less mode. Finally the sample was run fully at a range of 50–650 m/z and the results were compared by using Wiley Spectral library search programme.

The cells were dissociated with TPVG solution (0.2% trypsin, 0.02% EDTA, 0.05% glucose in PBS). The stock cultures were grown in 25 cm2 culture flasks and all experiments were carried out in 96 microtitre plates (Tarsons India Pvt. Ltd., Kolkata, India).

For Cytotoxicity studies,  weighed test extracts were separately dissolved in distilled DMSO and volume was made up with DMEM supplemented with 2% inactivated FBS to obtain a stock solution of 1mg/ml concentration and sterilized by filtration. Serial two fold dilutions were prepared from this for carrying out cytotoxic studies.

The monolayer cell culture was trypsinized and the cell count was adjusted to 1.0 x 105 cells/ml using DMEM containing 10% FBS. To each well of the 96 well microtitre plate, 0.1ml of the diluted cell suspension (approximately 10,000 cells) was added. After 24h, when a partial monolayer was formed, the supernatant was flicked off, the monolayer was washed once with medium and 100µl of different test concentrations of test extracts were added on to the partial monolayer in microtitre plates. The plates were then incubated at 37oC for 3 days in 5% CO2 atmosphere, and microscopic examination was carried out and observations were noted in every 24h interval. After 72h, the sample solutions in the wells were discarded and 50 µl of MTT in PBS was added to each well.

The plates were gently shaken and incubated for 3h at 37oC in 5%CO2 atmosphere. The supernatant was removed and 100µl of propanol was added and the plates were gently shaken to solubilize the formed formazan. The absorbance was measured using a microplate reader at a wavelength of 540nm12. The percentage growth inhibition was calculated using the following formula and concentration of test sample needed to inhibit cell growth by 50% (CTC50) values is generated from the dose-response curves for each cell line13. 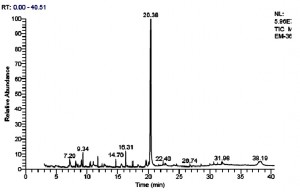 Through the MTT method, the median cytotoxic concentration (CC50) on CHOK 1cell line (Chinese Hamster Ovary cell line), and A-549 cell line (Human Lung adenocarcinoma epithelial cell line) were established for n-hexane fraction of methanolic extract of A. leptopus flowers. There was a gradual increase in the value of PGI (percentage of growth inhibition) as the concentration of extract was increased (2.30, 4.95, 7.15, 11.75 and 17.59% for the concentrations 62.5, 125, 250, 500 and 1000µg/ml respectively) against CHOK 1 cell line (Fig. 2). The mean value of CC50 observed for CHOK 1 cells was (p) >1000±0.00 and there was no significant activity. 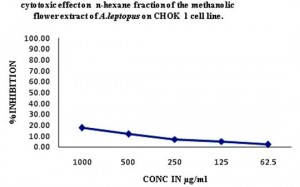 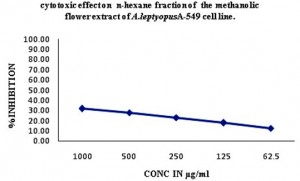 FIG. 3: CYTOTOXIC EFFECT ON N- HEXANE FRACTION OF THE METHANOLIC FLOWER EXTRACT OF A. LEPTYOPUS A-549 CELL LINE

CONCLUSION: The GC MS analysis report has shown that A.leptopus flowers contain various bio-active compounds like flavonoids, amino acids, carbohydrates, siloxanes, pyrones, terpenoids, Quinazolines, Vitamin D2 etc. O acetyl-L-serine is a cysteine precursor. Siloxanes are useful in cosmetic preparations. Rhamnose is a common glycone component of glycosides from many plants. Friedelan-3 one exhibits antihypertensive and antihyperlipidemic activity.  The isolation of pure phytochemical constituents and subjecting them to the screening of biological activity will be definitely giving fruitful results and will open a new area of investigation of individual components and their pharmacological potency.

Due to the presence of various phytochemical components, and the established medicinal uses of the flowers, we thought of screening the extract for cytotoxic properties. The n-hexane fraction of methanolic extract of A. leptopus flowers showed no cytotoxicity against Chinese Hamster Ovary cell line and Human Lung adenocarcinoma epithelial cell line. On the basis of the present study, it might be suggested that the flowers of Antigonon leptopus have no significant cytotoxic activity giving a preliminary indication of safety of the flowers for their intake in food. Evaluation of other pharmacological activities is under progress.

ACKNOWLEDGEMENT: The authors are thankful to the Management of Avanthi institute of pharmaceutical sciences, Cherukupally, Vizianagaram Dist, Andhra Pradesh, India for availing all the facilities and are also thankful to Radiant Research Services Pvt. Ltd, Srinagar, Bangalore-560 050, India, for carrying out GC-MS analysis of the sample.