ABSTRACT: Lannea coromandelica is one of the important herbal plants well distributed in India. It is commonly called as Odiar, Gumphini in South India. It was extensively used by the tribes all over India to treat various diseases such as body pain, tooth ache, stomach ache, ulcers, sexual impotency. The aim of the present study was to evaluate the GC-MS analysis, antibacterial and anticancer activities of methanol bark extract of L. coromandelica. The methanol extract was subjected to GC-MS analysis to find out active volatile and semi-volatile compounds. The antibacterial activity was carried out by well diffusion method by using nutrient broth agar medium. Microorganisms such as Escherichia coli, Staphylococscus aureus, and Bascilus subtilis were used to evaluate antibacterial activity. The maximum zone of inhibition 21 mm was measured for Bascilus subtilis at 500 µg/mL concentration followed by Staphylococscus aureus was 19 mm and Escherichia coli was 18 mm. The anticancer activity was carried out by MTT assay method for MCF7 cell line. The maximum cell death was 74.20 ± 0.71% at 100 µg/mL concentration and the IC50 was 23.83 µg/mL concentrations.

INTRODUCTION: Lannea coromandelica belongs to Anacardiaceae family and prevalently known as Indian ash tree. It was found in isolated places and in jungles all over India principally southern part of India. Not much scientific support was given to the folklore claims of the plant and some of its traditional uses have been investigated including wound healing activity, inflammation, gout, cholera, leprosy, vaginal troubles 1. This plant so far was extensively studied for its chemical constituents and pharmacological activities.

The tree gained its importance due to remarkable variations in the chemistry and uses. However, there is an increased attention on extracts and biologically active compounds isolated from plant species used in herbal medicine, due to the side effects and the resistance that pathogenic microorganisms build against the antibiotics.

Plants generally produce many secondary metabolites which are biosynthetically derived from primary metabolites and constitute an important source of microbicides, pesticides and many pharmaceutical drugs 2. From a long period of time medicinal plants or their secondary metabolites have been directly or indirectly playing an important role in the human society to combat diseases. Even though there are number of synthetic antitumour agents available, efforts are still on to search for effective naturally occurring anticarcinogens that would prevent, slow or reverse cancer development. Plants have a special place in the treatment of cancer. It is estimated that plant derived compounds constitute more than 50% of anticancer agents 3. Extracts of plants were used for the treatment of various diseases and this forms the basis for all Indian systems of Medicine.

Collection of Plant: The L. coromandelica barks were collected from Maduvankarai, Guindy, Chennai, Tamil Nadu, India and it was examined, recognized and authenticated by literature.

The collected barks were washed, shade dried for 2 d, pulverised in a plant mill and stored in air tight container for future use.

Preparation of Plant Extract: The bark powder was subjected to extraction by maceration method. About 10 g of bark powder was soaked in 100 mL of methanol for 72 h at room temperature. The supernatant was filtered using filter paper and the filtrate was evaporated to dryness in a hot plate at 45 - 50 ºC.  The condensed semi solid portion was transferred to a sample bottle and stored in a refrigerator 4.

Microorganisms: Microorganisms such as Escherichia coli, Staphylococscus aureus, and Bascilus subtilis, were stored in a refrigerator at ARMATS Biotek Training and Research Institute which were used for antimicrobial activity.

Reference and Control: Tetracycline was chosen as the reference compound for bacteria. The control consists of solidifying agar containing well onto which the solvent poured, and the extract was soluble in it.

Aseptic Conditions: The aseptic chamber which consist of a wooden box (1.3 m × 1.6 m × 0.6 m) with a door, was cleaned with 70% ethanol and irradiated with short wave UV light (from lamp).

Nutrient Broth Agar Preparation: Nutrient broth agar was used (NBA) to make up the medium for bacteria. Nutrient broth agar was prepared according to the standard methods (peptone-5 g; yeast extract-3 g; NaCl-5 g distilled water 1000 mL; pH 7. ± 0.2; agar 20 g). Depending upon the availability of strains, the medium was calculated, make up into desirable volume, stirred and then autoclaved at 15 Lbs and at 121 ºC for 15 min. The hot NBA medium was poured into the plates kept at sterile laminar air flow and partially covered.

As soon as the agar was completely solidified, the plates were capped and labelled. Under aseptic conditions, the microorganisms were streaked onto the solidified plates and the wells were made by using 8 mm well borer that was sterilized with alcohol and flame. The methanol bark extract was pipette into the different wells of microorganism streaked plates at different volumes (50 µL, 75 µL, 100 µL). They were labelled and placed in an incubator at 37 ºC for 24 h for bacterial growth 5.

MTT Assay Method: Cell viability was measured with the conventional MTT reduction assay method as described Mossman 6 with slight modification. Briefly, MCF7 cells were seeded at the density of 5×103 cells/well in 96-well plates for 24 h, in 200 μL of RPMI with 10% FBS. Then the culture supernatant was removed and RPMI containing various concentrations (0.781-100 μg/mL) of test compound were added and incubated for 48 h. After treatment the cells were incubated with 10 μL of MTT (5 mg/mL) at 37 °C for 4 h and then with DMSO at room temperature for 1 h. The plates were read at 595 nm on a scanning multi-well spectrophotometer.

GC-MS Analysis: GC-MS analysis was carried out for the methanol extract of L. coromandelica and the eluted compounds 11 were showed in Table 1. The compound piperazine, 1-(2 adamantyl-)- 4-benzoyl (1- (2-Adamantyl)- 4-benzoylpiperazine) was eluted by GC-MS which may be one of the reasons for the anticancer property of the extract. 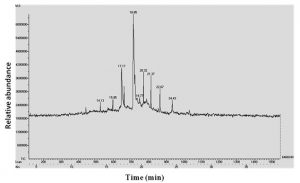 Anticancer Activity: Cancer chemoprevention with natural phytochemical compounds is an emerging strategy to prevent, delay or cure cancer 8. The MTT assay is a colorimetric assay for assessing cell metabolic activity. The MTT in-vitro cell proliferation assay is one of the most widely used assays for evaluating preliminary anticancer activity of synthetic derivatives, natural products and natural product extracts 9. This assay gives an indication of whole cell cytotoxicity; however, to determine the exact molecular target further assays need to be perform kinase enzyme activity that play a key role in a number of physiological processes and their inhibitors have been found to exhibit anticancer activity against various human cancer cell lines. The MTT assay involves the conversion of the water soluble MTT (3-(4, 5-dimethylthiazol-2- yl)- 2, 5-diphenyltetrazolium bromide) to an insoluble formazan 10. The formazan is then solubilized, and the concentration was determined by optical density at 570 nm. The maximum MCF7 cell death was 74.20 ± 0.71% at 100 µg/mL concentration of bark extract of L. coromandelica and the IC50 was 23.82 µg/mL concentration.

CONCLUSION: The compound 5-Hydroxy 6, 7, 8 –trimethoxy-2, 3-dimethyl chromone present in the bark extract was eluted by GC-MS, which may be the reasons for antibacterial activity. The present study demonstrated the cytotoxic activity as a measure of percentage cell mortality calculated by MTT assay in MCF-7 cell line in a dose dependent manner at the end of 48 h incubation with bark extract. Breast cancer cell line MCF-7 was used for this study, because of the requirement of more effective treatment for the increasing incidence of breast cancers worldwide.

The American National Cancer Institute (NCI) guidelines set the limit for cytotoxic activity for crude extracts at 50% inhibition (IC50) for cancer cell proliferation was not more than 30 µg/mL after the exposure time of 72 h. However a crude extract with IC50 less than 20 µg/mL is considered to be highly cytotoxic. The results of the present study showed the cytotoxic effects of L. coromandelica on MCF-7 cells with the IC50 of 23.82 µg/mL concentration. Hence L. coromandelica bark extract is considered to be effective drug discovery for cancer research in future.

C. Sivaraj *, B. Pavithra, A. Srivastav and P. Arumugam