ABSTRACT: Marine algae are one of the largest sources for biogenic compounds. They produce a wide variety of chemically active metabolites. They are found to possess significant antioxidant, and phytochemical activities. Macroalgae provides a great variety of metabolites and natural bioactive compounds with antimicrobial activity, such as polysaccharides, polyunsaturated fatty acids, phlorotannins and other phenolic compounds, and carotenoids. Several species of brown algae have been investigated for their bioactive natural products. The aim of the present study was to investigate the antioxidant, antibacterial activity and GC-MS analysis of active compounds present in the methanol extract of the brown algae, Padina tetrastromatica. For antioxidant activity, DPPH radical assay, ABTS radical cation scavenging assay, phosphomolybdenum reduction assay and Fe3+ reducing power assay were carried out. The maximum DPPH radical scavenging activity was 54.78%. The extract also exhibited significant antibacterial activity against the clinical pathogens, Vibrio cholera, Shigella flexneri and Pseudomonas aeruginosa. The phytochemical analysis showed the presence of alkaloids, terpenoids, steroids, flavonoids and phenolic compounds. GC-MS analysis revealed the presence of fatty acids and a flavone compound (2-Phenyl-4H-1-benzopyran-4-one), which is a potent antioxidant compound.

INTRODUCTION: Marine algae are abundant and potentially renewable resources that are currently being explored for their bioactive compounds 1. They are rich sources of structurally diverse metabolites with great pharmaceutical and biomedical potential 2, 3. The bioactive compounds from the marine algae are known to possess antibacterial, antifungal, antialgal, antiviral, anti-malarial, anticancer and antifouling properties 4.

Many studies have proved that seaweeds are a potential source of natural antioxidants 5. The challenges in combating new diseases and resistant strains of microorganisms always demand the development of novel therapeutic agents 6.

The interest in marine organisms as a potential and a promising source of pharmaceutical agents has increased during recent years 7. Marine macro-algae are the most interesting algae group because of their broad spectrum of biological activities 8. Research studies in the past have shown that the extracts of Padina tetrastromatica, have free radical scavenging ability and antibacterial activity 9, 10. Also, the phytochemical composition of the algae is known to possess a wide variety of bioactive compounds 11, 12.

Hence, the present study was focused at investigating the antioxidant, antibacterial activity and GC-MS analysis of active compounds present in the methanol extract of the marine brown algae, Padina tetrastromatica.

Collection of Padina tetrastromatica: Fresh algae were collected in polythene bags containing seawater from the coastal line of Mandapam (9°16'37.34"N; 79°7'30.78"E), Ramanathapuram district, India and transported to the laboratory. Then the algal materials were thoroughly washed in running tap water to remove the attached epiphytes and other marine debris. Finally, it was washed with distilled water and allowed to dry under shade for 5 - 7 days, until the moisture was completely removed. The dried material was ground to a coarse powder using an electric mixer and stored in air tight containers at room temperature 13.

Preparation of Crude Extract: Finely ground algal material was extracted with methanol in the ratio of 1:10 (w/v) in a conical flask for 72 h. The mixture was filtered using filter paper in a separate container. The above process was repeated for two times with the same residue using fresh solvent. All the supernatants were collected together and then the solvent was removed by rotor evaporator. The filtrate thus obtained was allowed to concentrate and stored for further studies 14.

DPPH Radical Scavenging Assay: The antioxidant activity of the methanol extract of Padina tetrastromatica was measured on the basis of the scavenging activity of the stable 1, 1- diphenyl 2-picrylhydrazyl (DPPH) free radical 17. One mL of 0.1 mM DPPH solution in methanol was mixed with 1 mL of various concentrations (100 - 600 μg/mL) of the extract. The mixture was then allowed to stand for 30 min incubation in dark. Ascorbic acid was used as the reference standard. 1 mL methanol and 1 mL DPPH solution was used as the control. The decrease in absorbance was measured using UV-Vis Spectrophotometer at 517 nm. The percentage of inhibition was calculated using the following formula:

ABTS Radical Cation Scavenging Assay: The antioxidant capacity was estimated in terms of the ABTS [2, 2'-azino-bis (3-thylbenzothiazoline-6-sulphonic acid)] radical cation scavenging activity 18. ABTS was obtained by reacting 7 mM ABTS stock solution with 2.45 mM potassium persulfate and the mixture was left to stand in the dark at room temperature for 12 - 16 h before use. The ABTS solution (stable for 2 days) was diluted with 5 mM phosphate-buffered saline (pH 7.4) to an absorbance of 0.70 ± 0.02 at 730 nm. The extract in varying concentrations (10 - 60 µg/mL) was added to 1 mL of diluted ABTS solution, the absorbance was measured after 10 min incubation at 730 nm. The ABTS radical scavenging activity was expressed as

Phosphomolybdenum Reduction Assay: The antioxidant capacity of the algal extract was assessed as described by Prieto et al., 19. The extract with concentrations ranging from 10 to 60 μg/mL was combined with reagent solution containing ammonium molybdate (4 mM), sodium phosphate (28 mM) and sulphuric acid (600 mM). The reaction mixture was incubated in water bath at 90 °C for 90 min. The absorbance of the coloured complex was measured at 695 nm. Ascorbic acid was used as standard reference.

Ferric (Fe3+) Reducing Power Assay: The reducing power of the algal extract was determined by using the following procedure 20. One mL extract of different concentrations (10 - 60 µg/mL) was mixed with phosphate buffer (1 mL, 0.2 M, pH 6.6) and potassium ferricyanide [K3Fe(CN)6] (1mL, 1 %). The mixtures were then incubated at 50 °C for 20 min. One mL of trichloroacetic acid (10%) and 1 mL of FeCl3 (0.1%) was added and the absorbance was measured at 700 nm using Spectrophotometer. Ascorbic acid was used as the standard reference.

Antibacterial Activity of Padina tetrastromatica on Clinical Isolates: The clinical isolates: Salmonella typhi, Vibrio cholera, Shigella flexneri and Pseudomonas aeruginosa were used to study the antibacterial activity by agar well-diffusion assay 21. 10 mg of the algal extract was dissolved in 1mL of Dimethyl sulfoxide (DMSO) to form the test extract. Fresh overnight broth culture of the clinical pathogens were prepared and inoculated onto Mueller Hinton agar plates, by uniformly swabbing using a sterile cotton swab. Then five wells of 6 mm diameter were made on the plates using a sterile cork borer.

To each well the test extract in varying concentrations were added. Dimethyl sulfoxide (DMSO) was used as negative control and the broad spectrum antibiotic Tetracycline was used as positive control. The plates were incubated for 24 hours at 37 °C. After incubation, the zones of inhibition were measured. The tests were done in triplicates for quality results.

Gas Chromatography - Mass Spectrometry (GC - MS): For GC-MS analysis, the sample was injected into a HP-5 column (30 m X 0.25 mm i.d with 0.25 μM film thickness), Agilent technologies 6890 N JEOL GC Mate II GC-MS model. Helium was used as carrier gas with a flow rate of 1 mL/min; the injector was operated at 200 °C and column oven temperature was programmed as 50 - 250 °C at a rate of 10 °C / min injection mode. The following MS conditions were used: ionization voltage of 70 eV; ion source temperature of 250 °C; interface temperature of 250 °C; mass range of 50 - 600 mass units. A chromatogram was obtained and the mass spectrum of the unknown component was compared with the spectrum of the known components stored in the NIST library.

Statistical Analysis: All the experiments were conducted in triplicates and data given in tables were average of the three replicates. All data were reported as mean ± standard deviation of three replicates.

DPPH Radical Scavenging Assay: The extract demonstrated high capacity for scavenging free radicals by reducing the stable DPPH (1,1-diphenyl-2-picrylhydrazyl) radical to the yellow coloured 1,1-diphenyl-2-picrylhydrazine and the reducing capacity increased with increasing concentration of the extract. The maximum DPPH radical scavenging activity was 54.78% at 600 µg/ml (Table 2). The IC50 value was found to be 518.8 μg/mL concentration (Fig. 1) and was compared with standard (Ascorbic acid, IC50 = 11.98 μg/mL concentration). 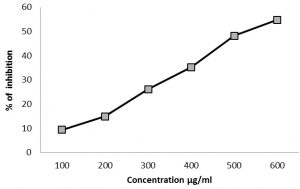 Phosphomolybdenum Reduction Assay Activity: The total antioxidant activity of Padina tetrastromatica was measured spectrophotometrically with a maximum absorption at 695 nm (Table 4). The maximum absorbance was 0.242 at 60 µg/mL concentration (Fig. 3). It was compared with the standard (0.359) Ascorbic acid. 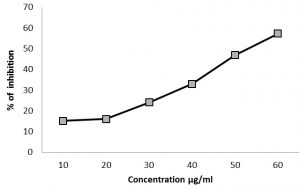 Ferric (Fe3+) Reducing Power Activity: The reducing power of Fe3+ to Fe2+ was studied and showed reduction ability in a dose dependent manner (Fig. 4). The maximum absorbance was 0.302 at 60µg/mL (Table 4) and was compared with the standard (0.289) Ascorbic acid. 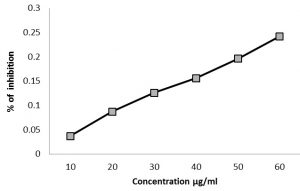 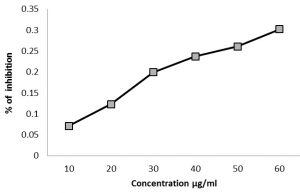 GC-MS Analysis: GC-MS analysis revealed the presence of various bioactive compounds; the eluted compounds are shown in Table 6 and the chromatogram is given below. A flavone compound (2-Phenyl-4H-1-benzopyran-4-one) was eluted and it is a potent antioxidant compound.

DISCUSSION: In the present study, the antioxidant activity and ability of Padina tetrastromatica to inhibit clinical pathogens have been studied and the results indicate that this alga can be used in control of bacterial infections and be used as a natural antioxidant agent. Earlier, studies by Aseer Manilal et al., (2016) 22 and Pushparaj et al., (2014) 23 also reported the antibacterial activity of this algae. Studies by Yin Yin Chia et al., (2015) have shown a significant antioxidant activity. The GC-MS results of Shaikh et al., (1991) 24 reported the presence of fatty acids in Padina tetrastromatica which is in agreement with the present study. The results prove that this algal species is an excellent source of bioactive compounds with a wide variety of application.

CONCLUSION: The present study indicates that the methanol extract of Padina tetrastromatica has significant inhibitory activity on clinical pathogens. The phyto-constituents of the algae possess good antioxidant potential and other significant biogenic activities. The presence of 2-Phenyl-4H-1-benzopyran-4-one could be one of the reasons for the antioxidant property of the extract.

ACKNOWLEDGEMENT: The authors would like to express their thanks to the coastal field workers at Mandapam, for assisting in the collection of seaweed.