ABSTRACT: The architecture of cocoons and the chemical compounds present in the cocoons play crucial role to provide protection of the pupae during metamorphosis. Insects spin a silk web as cocoon to facilitate protection and ensuring proper inner environment inside the cocoon during the metamorphosis. Such cocoons are equipped with a variety of chemical compounds which include antibacterial, antifungal, insecticidal and insect repellent etc. Tasar silk worms are wild silkworms grown on forest trees for their commercial value, are subject to harsh environmental conditions in comparison with domesticated Bombyx mori silk worms. In this study antimicrobial compounds were screened from Indian tropical wild tasar cocoons by Fourier transform infrared spectroscopy (FT-IR), Fourier transform-Raman spectroscopy (FT-Raman), Gas chromato-graphy- Mass spectrometry (GC-MS) and identified the chemical compounds by NIST05 MS Library. The wild cocoons possess active alcoholic and phenolic compounds, aromatic organic acids, alkaloids, fatty acids and their derivatives for various protective functions. This chemical defence strategy of wild cocoons was confirmed by evaluating the antimicrobial potential of methanolic extract of Antheraea mylitta cocoons (AmCE) against pathogenic bacterial strains of Escherichia coli, Staphylococcus aureus and fungal strains of Candida albicans, Aspergillus flavus. We concluded the bioactive chemical compounds of wild silkworm cocoons other than silk sericin and fibroin proteins are responsible for stability of the cocoon for long duration in wild harsh environmental conditions during metamorphosis. These bioactive compounds involved in the protection of Antheraea mylitta cocoons have been elucidated.

INTRODUCTION: Silkworm cocoons are one of the complex structures and mysterious products evolved in nature. The insects spin cocoons to protect pupae, the sedentary and inactive stage of its life cycle. Cocooning is a mechanism by which most sericigenous insects protect the pupa during metamorphosis during which the pupa is protected from adverse environmental conditions.

Several aspects like insect repellent, antimicrobial carbon gating etc are facilitated through various bioactive compounds which have not been elucidated. The silkworms have been exploited for silk production and the process is well established. Though silk is composed of two main proteins the hydrophilic sericin and crystalline fibroin with distinct properties and functions which dictate the structure of the cocoon.

Silkworm cocoons feature a great interest in the biomimetic progress in flexibility, damage resistance, light weight, water proof, microbial resistance and insect-pest repelling factors along with protein composite biomaterials. The comparative analysis of compounds studied and as compared to domesticated silkworm, wild silkworms and their cocoons show slight different combination of physical, morphological, structural and chemical properties adapted to cope with harsh natural conditions 1.To understand the biomimetic potential of the cocoons, the relationships between their structure and function, which have been evolved over millions of years of evolution 2.

The tropical tasar silkworm Antheraea mylitta is an endemic wild silkworm of central parts of Indian forests. Unlike domestic silkworm cocoons which are processed and handled for commercial silk production under supervision, while Antheraea mylitta cocoons are spun on trees in wild and the cocoon structure is peculiar with the peduncle and with hard built. Current research on silkworm is focused only on textile applications. The chemical properties of the cocoons and constitution of bioactive compounds in the cocoons and their functions need to be explored.

In this study screening of chemical compounds from the methanolic extract of Antheraea mylitta cocoons (AmCE), their functional groups and structures of the compounds by biophysical techniques like Fourier transform infrared spectroscopy (FT-IR), Fourier transform-Raman spectroscopy (FT-Raman) and Gas chromatography -mass spectrometry (GC-MS) have been utilized for efficiently analyzing and identifying natural compounds. The process of instrumental analysis of GC-MS is continued with the identification of the compounds by using National Institute of Standards and Technology (NIST) USA, chemical compounds database. The antimicrobial property of AmCE was assessed on natural pathogenic bacterial strains of Escherichia coli and Staphylococcus aureus and fungal species of Candida albicans and Aspergillus flavus.

Fourier transform-Infrared spectroscopy (FT-IR): The FT-IR analysis was performed by mixing dried AmCE in Potassium bromide (Sigma Aldrich) pellet. The IR spectra was recorded in NICOLET 6700 USA, spectrophotometer,  spectrum acquired by accumulation of 32 scans and the resolution of 4cm-1 and ranging from 500 - 4000 cm-1.

Fourier Transform-Raman Spectroscopy (FT-Raman): The FT-Raman spectrum of AmCE was recorded on a NXR-FT-RAMAN, NICOLET, USA spectrometer of the region 500-3500 cm-1, using the 1064 nm line of an Nd: YVO4 laser for excitation operating at 200 mW power with a resolution of 1 cm-1.

Gas Chromatography-Mass Spectrometry (GC-MS): The GC-MS analysis was performed with a GCMS (Shimadzu QP-2010S Tokyo, Japan) of thermal Desportion System TD 20. The system was equipped with HP-5MS capillary column of 30 mx 0.25 mm and 0.25 mm of film thickness with the 70eV of ionization energy was used. Helium gas (99.99% purity) was used as a carrier gas at a constant flow rate of 1.21 ml/min. The concentrated 2 µl of extract was injected into GC-MS system, the injector port and detector temperature maintained at 280 OC. The initial temperature at 50 OC for 3 min, then increased to 280 OC at 4 OC min-1 and held for 2min. The resulting GC-MS peaks were analyzed for each fractions based on the computer evaluation of mass spectra through NIST, MS library by the direct comparison of peaks and retention time with standard compounds followed by the specific fragmentation patterns of the mass spectra of individual compounds.

Anti-microbial Activity: Antibacterial activity of AmCE was evaluated by Agar well diffusion method using Lag phase bacterial strains of Staphylococcus aureus (Gram positive) and Escherichia coli (Gram negative). The bacterial cultures in Nutrient broth were swab inoculated onto the sterile nutrient Agar petri plates (Himedia Laboratories Pvt. Ltd., Mumbai)  and four different concentrations of dried AmCE (25, 50, 75 and 100 µgmL-1 in DMSO) were added into the respective labelled wells. The cultures were incubated at 37 ºC for 24 h in incubator. The antifungal activity of the AmCE in DMSO was carried out against Candida albicans and Aspergillus flavus by the Agar well diffusion method on potato dextrose agar (PDA) plate 3. The fungal spore suspension was aseptically inoculated on PDA plates. The dried AmCE was mixed with DMSO in four concentrations (25, 50, 75 and 100 µgmL-1) and loaded into the previously labelled wells. Plates were incubated in dark at room temperature for 4 days. The antimicrobial activity was evaluated by measuring the zone of inhibition formed around the wells.

The spectra of 1384.31 cm-1 specific to the hydroxyl group of amino moieties, a medium band arising at 1021.53 cm-1 due to the interaction of C-N stretching in aliphatic amines was observed. Another distinct FT-IR peak at 550.80 cm-1 assigned for alkyl halides was also observed. The assigned FT-IR peaks to the molecular functional groups of active compounds present in the extract and elucidated the structure from the available literature 3 - 6. The FT-IR spectra shown in Fig. 1 confirm the presence of functional groups of active alcoholic and phenolic compounds, aromatic organic acids, alkaloids, fatty acids and their derivatives. 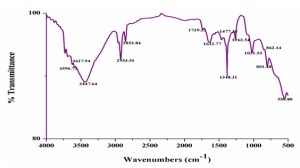 FT-Raman spectroscopy: The FT-Raman shifts of the AmCE medium peak at 3343.61 cm-1 related to N-H vibrations of the molecules was observed.  The spectra at 2944.44 cm-1 attributed to the C-H asymmetric stretching and strong peak of 2837.60 cm-1 concludes the presence of C-H vibrations of organic compounds. The 1706.69 peak results due to compounds with C=O groups.

The Raman shifts at 1462.88 cm-1 indicating C-O stretching and aromatic ring chain vibrations, the weak spectrum at 1108.48 cm-1 is of C-H bending and asymmetric C-O-C vibrations of the chemical compounds, the specific spectra at 796.52 cm-1 and 557.93 cm-1 related to C-Cl stretching along with C-Cl bending respectively were observed and shown in Fig. 2. The Raman shifts related to the functional groups and structure were compare with earlier studies on organic compounds 7 - 10. 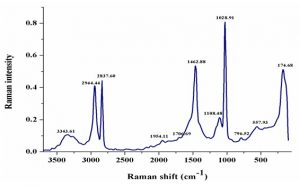 GC-MS: Interpretation on mass spectrum of GC-MS was conducted using NIST05 MS library, the spectrum of the unknown component was compared with the spectrum of the known components stored in the NIST library. In the GC-MS analysis 10 bioactive antimicrobial compounds were identified in AmCE. The identification of chemical constituents is based on the peak area, molecular weight and molecular formula. The GC-MS chromatogram showed prominent peaks from 6.072 to 26.895 shown in Fig. 3. The screened bioactive compounds were identified and compiled in Table 1.

Antimicrobial Activity: The antibacterial activity of AmCE on Escherichia coli and Staphylococcus aureus shown sensitivity to AmCE in all the four concentrations. As according to increase in concentrations zone of inhibition was increased in both the organisms. Similarly antifungal activity of AmCE on Candida albicans and Aspergillus flavus exhibited valid zone of inhibition.

The results are expressed as Mean ±SD (n=3)

DISCUSSION: The chemical constituents of insect cocoons, and their role in defence strategies in nature is neglected in the field in entomology research. The wild tasar cocoons are considered for study due to non-domestic nature of wild silks exposure to biotic and abiotic stress induced in wild environmental conditions. Biophysical analysis of AmCE by FT-IR and FT-Raman spectroscopic studies are synchronized to identify functional groups, molecular vibrations and bonding patterns of the active compounds and confirmed the compounds by GC-MS. The FT-IR and the specific Raman shifts of AmCE attributed to the asymmetric starching, vibrations of C-H moieties presumed to be fatty acids, alkane hydrocarbons, esters, terpene alcohols, aldehydes, aromatic carboxylic acids and steroidal compounds. The aldehyde specific C=O stretching observed in IR and FT-Raman studies further identified and confirmed by the GC-MS as Decanal (RT 21.756). The decanal was reported as potential antimicrobial agent 11. The FT-IR and Raman spectra specific to C=O stretch of carboxylic acids observed was confirmed by GC-MS as nonadecanoic acid (RT 16.006), oleic acid (RT 17.885) and cyclopropane pentanoic acid, 2-undecyl-, methyl ester (RT 19.515). These fatty acids are reported for their anti-bacterial and antifungal properties 12 - 15. The FT-IR spectra for C-C, C-H stretch of aromatic compounds and the Raman shifts of C-O stretching, aromatic ring chain vibrations, C-H bending and asymmetric C-O-C vibrations and C=O containing molecules identified in AmCE are further confirmed by GC-MS as Bis-(2 ethylhexyl) maleate (RT 20.453); 1,2-Benzenedicarboxylic acid (RT 23.145) and Ethyl iso-allocholate (RT 26.323). The anti bacterial property of Bis-(2 ethylhexyl) maleate and anti-fungal nature of steroidal Ethyl iso-allocholate was evaluated on some human and plant pathogenic fungi respectively 16, 17. The dicarboxylic acid 1, 2-Benzenedicarboxylic acid was reported as effective antifungal agent 18.

The characteristic FT-IR and FT-Raman spectra for C-N stretch and N-H vibrations and the GC-MS studies conclude the compounds with C-N with N-H vibrations are as 1,3,5-Triazine-2,4diamine (RT 6.072) and was reported as an antibacterial and antifungal agent 19. The FT-Raman spectra for the C-Cl stretching as well as bending and the GC-MS studies revealed the compound with C-Cl as trichloroacetic acid hexadecyl ester (RT 26.541) a strong cytotoxic agent may resist the predatory organisms to multiply on the cocoon, the cytotoxicity of TCA was reported in previous studies 20. The IR vibrations of the C-C of the aromatic ringed structures and the related GC-MS chromatogram concluded as cholestane (RT 25.197) a streroidal compounds. The rare steroid cholestane in tasar cocoons is biologically very significant due to its antimicrobial property because of its imidazole moiety 21.

For antimicrobial potential of the AmCE, along with fatty acids other bioactive compounds traced in cocoon by their individual or the synergistic action are responsible for microbial inhibitory activity in natural environment. These anti-microbial compounds in the wild tasar cocoons might be the responsible factors to provide protection from decomposing microorganisms in the wild conditions.

CONCLUSION: The screened chemical constituents might be involved in the protection of Antheraea mylitta cocoons in wild environment by their individual or synergistic action. We presume the chemical composition of wild silkworm cocoons other than silk sericin and fibroin proteins are responsible for biologically active cocoons for their sustainability, integrity and stability for long duration in wild harsh environmental conditions. By this study the strategic developments for the economic, commercial extraction of bioactive compounds during degumming process of the wild cocoons with medicinal importance.

CONFLICT OF INTEREST: Authors declare no known conflict of interests.