ABSTRACT: The study aimed to investigate and characterize the antioxidant compounds from the leaves and barks of Dillenia scabrella (Dilleniaceae) (D. scabrella), an indigenous plant in the Northeast. The air-dried leaves and barks were powdered and subjected to selective sequential extraction using solvents of increasing polarity through percolation, namely, methanol, ethyl acetate + ethanol and water to obtain three different extracts. Further, the antioxidant potential of each of the extracts was checked by DPPH (1, 1-diphenyl, 2-picryl hydrazyl) assay. It was followed by preliminary phytochemical tests and gas chromatography-mass spectrometry to identify the anti-oxidant compound. All 4 crude extracts have shown significant antioxidant activity. The methanol extract of leaves (93%) at 500 µg/ml and bark (93.48% and 93.42%) at 500 µg/ml and 400 µg/ml showed free radical scavenging activity which was greater than the standard ascorbic acid (92.5%). In the phytochemical tests, phenolics were invariably present in all 4 extracts. Qualitative determination of the different biologically active compounds from crude extracts of D. scabrella using gas chromatography-mass spectrometry revealed different types of high and low molecular weight chemical entities with varying quantities present in each of the extracts. 16 bioactive compounds were identified in which 7 were reported for different biological activities. 3 compounds namely Cyclotrisiloxane Hexamethyl, 2, 4, 6-Cycloheptatrien-1, 3, 5-Bis-Trimethylsilyl, Trisiloxane- 1, 1, 1, 5, 5, 5-Hexamethyl-3, 3-Bis Trimethylsilyl are identified as compounds responsible for the above mentioned antioxidant property. Thus, identification of different biologically active compounds in the extracts of D. scabrella leaves and bark warrants further biological and pharmacological studies.

INTRODUCTION: Dillenia scabrella is a deciduous tree Fig. 1 belonging to the family Dilleniaceae. There are about 100 species of Dillenia native to tropical and sub-tropical regions of Southern Asia, Australia and India 1. However, to date, only a few Dillenia sp. namely D. indica, D. pentagyna, D. papuana and D. suffruticosa have been studied and reported to have pharmacological potential 2.

It is locally known as Agatchi among the Garo tribe of Meghalaya and Banji-ou among Assamese people. Dillenia scabrella fruits are eaten raw or as a pickle while the flowers are cooked with dry fish in Garo cuisines. The bark of this tree is traditionally used as an antidote for snake bites 4. Though D. scabrella is well known for its uses no research data could be found on its chemical identity and pharmacological properties.

Thus, the objective of the study was to investigate the antioxidant property of D. scabrella and to identify the anti-oxidant compounds through GC-MS analysis.

FIG. 1: DILLENIA SCABRELLA PLANT (A) AND DRIED COARSE POWDER OF LEAVES (B) AND BARK (C)

Plant Sample: The leaves and barks of D. scabrella were collected locally from West Garo Hills, District of Meghalaya on 17th January 2018 and authenticated in the Botanical Survey of India, in Shillong, Meghalaya (BSI/ERC/Tech./Plant Ident. /2018/734). The voucher specimen of D. scabrella was deposited in the herbarium.

Phytochemical Screening: The qualitative phytochemical screening of all the three extracts of both samples was performed according to the procedure described by 6. The next experiments proceeded with methanolic and combined ethyl acetate +ethanol extracts of both leaves and bark. The aqueous extracts were not subjected to further analysis.

Determination of Antioxidant Activity: The antioxidant activity of D. scabrella leaves and barks extract were determined by the DPPH radical scavenging assay 7.

Different dilutions (100-500 µg) of the methanolic and combined ethyl acetate + ethanol extracts were prepared and mixed with (0.004% w/v) methanolic DPPH solution. The solution was incubated in the dark for 30 min and the absorbance was read at 515 nm using a UV-Visible spectrophotometer. Ascorbic acid was used as a standard. The percentage (%) of the DPPH radical scavenging ability of the sample was calculated with the help of the formula given below.

Gas Chromatography-Mass Spectrometry: Gas Chromatography-Mass Spectrometry analysis was carried out on methanol, ethyl acetate+ ethanol extracts of leaves and bark of D. scabrella by using Parkin Elmer in Biotech Park, IIT Guwahati. A DB-5MS column 60.0 m × 250 µm was used with oven program with an initial temperature of 50 °C for 2 min, ramp 5 °C/min to 300 °C, hold 8 min. The injector temperature was 250 °C. The carrier gas used was helium (He). A split injection with a ratio of 0:1 was used. The sample volume injected was 0 µl. The Solvent Delay was 8 min. The transfer temperature was 200 °C and the source temperature was 180 °C. The sample was scan at 40 to 600 Da. 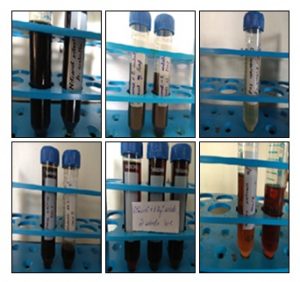 Phytochemical Screening: The preliminary phytochemical screening of the crude extracts of leaves and bark revealed the presence of alkaloids, saponins, phenolic compounds, tannins, gums and carbohydrates Table 2. The phenolics were sturdly present in all extracts.

Antioxidant Activity of D. Scabrella: The methanol leaf and bark extracts of D. scabrella (DLM, DBM) showed significant antioxidant activity in Table 3. The percentage of inhibition of DPPH radicals (93%, 93.48%), at 500 µg/ml of methanol leaf and bark and 93.42% at 400 µg/ml of methanol bark extract is significant than standard ascorbic acid (92.5%). The free radical scavenging activity showed by methanol leaf extracts was concentration-dependent while the combined ethyl acetate and ethanol extracts of leaves showed stable free radical scavenging activity (79-61%) from higher (500 µg/ml) to lower concentrations (100 µg/ml) Table 3. Similarly, the methanol extract (DBM, DBEA+E) of bark showed 93.4% and 93.32% of inhibition against free radicals at 500 and 400 µg/ml concentration. The reduction of inhibition was concentration-dependent and it was more significant than standard ascorbic acid.  The combined ethyl acetate + ethanol extract has shown 84.23% inhibition at 500 µg/ml concentration but eventually, it decreased to 5% at 100 µg/ml.

GC-MS Analysis of D. Scabrella Leaves and Barks Extract: The result of GC-MS analysis was carried out on four crude extracts of leaves and bark (DLM, DLEA+E, DBM and DBEA+E) is given in Fig. 3-10. The library data of major peaks found in each chromatogram is extracted by using database NIST (National Institute of Standard and Technology), and their reported bioactivity is shown in Table 4-7. Several peaks with different retention time (RT) were detected in the chromatograph Fig. 3, 5, 7, 9. The major peaks were subjected to analysis for further information on the molecular weight Table 4-7. The molecular weight and molecular formula were deduced from the spectra Fig. 4, 6, 8, 10.

FIG. 3: A CHROMATOGRAM OF THE BIOACTIVE COMPOUNDS PRESENT IN METHANOL EXTRACT OF D. SCABRELLA LEAVES (DLM) 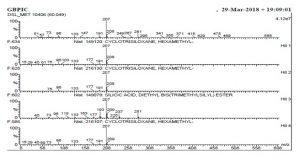 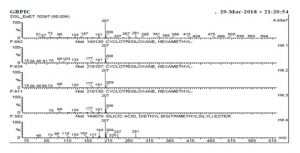 FIG. 7: A CHROMATOGRAM OF THE BIOACTIVE COMPOUNDS PRESENT IN METHANOL EXTRACT OF BARK (DBM)

FIG. 9: A CHROMATOGRAM OF THE BIOACTIVE COMPOUNDS PRESENT IN ETHYL ACETATE + ETHANOL EXTRACT OF BARK (DBEA+E)

DISCUSSION: D. scabrella is a novel plant material to the research community. The present study shows the efficiency of the leaves and barks in reducing the free radical power of DPPH. The DPPH assay of two extracts of leaf and two extracts of bark showed a significant free radical scavenging activity. D. scabrella leaf and bark methanol extract (DLM, DBM) showed 93% inhibition (of DPPH free radicals at concentration 500 µg/ml as compared to ascorbic acid which showed 92.5% inhibition Table 3 The combined ethyl acetate and ethanol extract of leaf and bark also showed considerable free radical scavenging activity with 79% and 83.23% inhibition of free radical at 500 µg/ml. The result is corresponding with the research reported in D. indica 7. The antioxidant molecules of D. indica contribute an active role in the reported anti-leukemic activity 18. The present result on the free radical scavenging property of D. scabrella is very promising for their antioxidant molecules which were higher than standard ascorbic acid. The phytochemical screening of the extracts displayed Table 2 the presence of alkaloids, saponins, phenolics, gums, flavonoids, steroids, tannins and carbohydrates. However, the above-mentioned phytochemicals were not present in all 6 extracts homogenously except phenolics which were present invariably. Phenolics were present intensely in DLM, DLEA+E and DBM and this result is analogous to the consistent free radical scavenging property they exhibited. This study present phenolics might be providing the antioxidant property.

Out of 16 compounds detected in GC-MS 7 are reported by various researchers for biological activities Table 4-7. The reported seven compounds possessing biological activities like antioxidant, antibacterial, antiseptic and antimicrobial. The three compounds namely cyclotrisiloxane hexamethyl, 2, 4, 6-cycloheptatrien- 1, 3, 5- bis- trimethylsilyl, trisiloxane- 1, 1, 1, 5, 5, 5-hexamethyl-3, 3-Bis trimethylsilyl are identified as compounds responsible for the above mentioned antioxidant property. 9 compounds are not reported so far for any biological activity from any natural products. cyclotrisiloxane hexamethyl, which was detected in all three extracts (DLM, DLEA+E and DBM) holding high antioxidant properties. The 2, 4, 6-cycloheptatrien-1, 3, 5-bis-trimethylsilyl was only present in leaf methanol extract (DLM). Trisiloxane- 1, 1, 1, 5, 5, 5-hexamethyl-3, 3-bis trimethylsilyl was present in combined ethyl acetate and ethanol extract (DBEA+E) of bark.

CONCLUSION: In conclusion, D. scabrellais a good antioxidant source which may be due to the presence of above mentioned antioxidant compounds. Identification of these compounds in the plant serves as the basis in determining the possible health benefits of the plant leading to further biologic and pharmacologic studies.

ACKNOWLEDGEMENT: The support and help extended by the Vice-Chancellor and his team (Assam Don Bosco University) for the successful completion of the research is highly acknowledged.

CONFLICTS OF INTEREST: We declare that we have no conflict of interest