INTRODUCTION: The use of medicinal plants as herbal remedies of different diseases has been prehistoric. The medicinal plants hold curative properties due to the presence of various secondary metabolites such as alkaloids, glycosides, flavonoids, saponins, tannins and essential oils into them 1.

Ziziphus mauritiana Lam. also called Jujube, Berry belongs to the family Rhamnaceae. Among almost 40 known species of Ziziphus, Z. auritiana Lam. is very common 2. It is found in almost all parts of northern India grown in dry places 3. Fruiting time is February to March ending, and the color is red with more juicy as litchi Fig. 1.

Nearly, all parts of the plant are used for the treatment of various diseases viz. leaves are useful in the treatment of diarrhea 4, wounds, abscess swelling, gonorrhea 2, liver diseases, asthma and fever 3, 6. The bark is reported to cause cytotoxicity in different cancer cell lines. The fruit endocarp containing protein, fat, carbohydrate, calcium, phosphorus, iron, carotene, thiamine, riboflavin, and vitamin C is known for its use as anodyne, sedative, anti-cancer, anti-asthmatic agent and potent wound healer 7, 8. It aids weight gain, improves muscular strength, and increases stamina 2. Hence, Jujube is both a delicious fruit and an effective herbal remedy. Collectively, fruit, leaves, and seeds extract exhibited the antioxidant activity 6, 9, 10, 11. The Z. mauritiana species are abundantly rich in carbohydrates, starch, proteins, sugar, mucilage and vitamins 6. 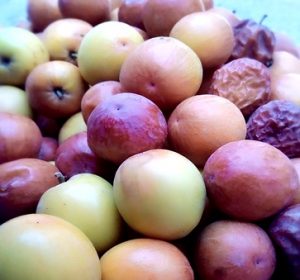 In the present work fruit pulps collected in March 2018 was shade dried for two weeks and then extracted in methanol solvent. Subsequently, sample extract after vacuum dry was evaluated on Gas Chromatogram-Mass Spectrometer (GC-MS) for the identification of different constituent compounds present in it. The aim of the present study was to explore various phytochemical compounds present in the Z. mauritiana fruit and interpretation of their therapeutic effects.

Collection of Plants: The fruits of Ziziphus mauritiana (Lam.) were collected in March 2018 from different places such as Baragaon Jhansi, Uttar Pradesh and Forest Nursery of Bhagwantpura Orchha, Madhya Pradesh, India. The fruits were got verified from Regional Ayurveda Research Institute, Jhansi (Voucher Specimen no. 20154), before proceeding to Soxhlet extraction of them into methanol solvent. The Ziziphus fruits were washed with water and shade dried in the laboratory for 2 weeks before extraction.

Preparation of Plant Extract: After drying, the homogenate was transformed into a fine powder by using an electric mixer. 50g dried fruit pulp powder of Z. mauritiana was put in Soxhlet apparatus for extraction in 450 ml of methanol for 24 h at 64 °C temperature. The extract was filtered through a Whatman filter paper no. 41 (110 mm). The resulting solution was concentrated in vacuum to give dryness to the methanol extract before storing at 4 °C in the refrigerator for further use.

Phenols Test: 0.5 ml of FeCl3 (w/v) solution was added into 2 ml of the test solution; the formation of an intense color indicated the presence of phenols 13, 14.

NaOH Test: 2-3 ml of extract and few drops of sodium hydroxide solution were added into a test tube. Formation of intense yellow color that becomes colorless on the addition of a few drops of dilute HCl indicated the absence of flavonoids 15.

Shinoda Test: 2-3 ml of extract and few fragments of magnesium metal were added into a test tube followed by dropwise addition of concentrated HCl. Formation of magenta color indicated the presence of flavonoids 16.

Lead Acetate Test: Few drops of 10% lead acetate solution were added into 5 ml of extract. No change in color indicated a negative result 17.

Foam Test: The extract was diluted in 20 ml of distilled water and shaken in a graduated cylinder for 15 min. 1 cm layer of foam indicated the presence of saponins 16.

Haemolysis Test: One drop of extract and one drop of blood was placed on the glass slide. Formation of hemolytic zone confirmed the presence of saponins 16.

Iodine Test: Addition of a few drops of dilute iodine solution into 3 ml test solution resulted in blue color which disappeared on boiling and reappeared on cooling 15. Reaction indicated the presence of alkaloids.

Wagner’s Test: few drops of Wagner’s reagent were added into 2 to 3 ml in the extract. Formation of reddish brown precipitate indicated the presence of alkaloids 18.

Gas Chromatography-Mass Spectrometry (GC-MS) Analysis: GC-MS analysis was carried out on a Perkin Elmer Turbo Mass Spectrophotometer which includes a Perkin Elmer autosampler XLGC. The column used in GC was Perkin Elmer Elite - 5 capillary columns measuring 30 m × 0.25 mm with a film thickness of 0.25 mm composed of 95% dimethylpolysiloxane. The helium (99.999%) was used as carrier gas at a flow rate of 0.5 ml/min. The sample injection volume utilized was 1 µl. The inlet temperature was maintained at 250 °C. The oven temperature was programmed 110 ºC (isothermal for 2 min) with an increase of 10 ºC/ min to 200 ºC then 5 ºC/min to 280 ºC, ending with a 5 min isothermal at 280 ºC. Total run time was 30 min.

The MS transfer line was maintained at a temperature of 200 °C. The source temperature was maintained at 180 °C. GCMS was analyzed using electron impact ionization at 70eV, and data was evaluated using Total Ion Count (TIC) for compound identification and quantification. The spectrums of the components were compared with the database of spectrum of known components stored in the GC-MS library. Measurement of peak areas and data processing were carried out by Turbo-Mass OCPTVS-Demo SPL software 19.

GC-MS Analysis of Methanolic Extract of Ziziphus mauritiana: Total 24 peaks were formed in the GC-MS spectrum of methanolic extract of Ziziphus mauritiana (MEZM) shown in Fig. 2. In the spectral matching of MEZM spectra with NIST/ NBS database to identify constituent compounds, total of 27 compounds found in 93.08% peak area were identified. The list is given in Table 2 with their retention time, molecular formula, molecular weight, and known therapeutic effects. 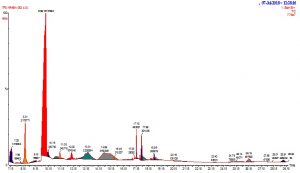 DISCUSSION: Mainly 10-12 phytochemical compounds were identified in >88% peak area. As per the known pharmacological actions of identified compounds Ber/jujube plant have anti-oxidant, anti-proliferative (5-Hydroxymethylfur-fural) 27, bacteriostatic, fungicide (3, 4-Altrosan) activity 34. Moreover, compounds known as carbohydrate metabolism regulator, diabetes marker (1, 5-Anhydroglucitrol, Polygalitol) 36, immunosuppressant, neuroprotective against retinal ischemia (D-Allose) were also reported 30, 31, 32, 33,. Surprisingly, Molinate and Levetiracetam compounds known to have anti-spermatogenic and anti-epileptic potential 21, 23 were also identified in MEZM fruit. A well-known antibiotics Clindamycin 22 was found in the fruit extract. As a matter of scientific attention, compound 2-Propyl octanoic acid (also known as Arundic acid) a treating agent of neurological disorders like Amyotrophic Lateral Sclerosis (ALS), Alzheimer's disease, Parkinson disease 44 were identified in the MEZM fruits. Amyotrophic Lateral Sclerosis (ALS), also known as Lou Gehrig’s disease, is a degenerative disease that affects the motor neurons connecting to the brain and spinal cord. It is fatal as it leads to eventual paralysis and death. So, far, there is no complete treatment known for ALS 26. Hence, identification of treating agents of ALS and other neurological disorders in Ber fruit is a novel finding of this work, which may lead to pharmaceutical use of Ber fruit as a good source of treating agent of fatal diseases like ALS. Besides above, Zizuphus fruits are hereby reported as good source of Thymine, flavouring agents (Maltol, Pentanoic acid, Nonyl ester) 24, 28, surfactants (2-Hexadecanoic acid), indicator of Hepatic Carnitine Palmitoyl Transferase I deficiency (Malonic acid, ethyl 4) 29, agents used in perfumery and manufacture of dyes (Formic acid), diabetes marker (Compound; 1, 5 Anhydroglucitrol) 36, total cholesterol regulator (Compound; Stigmasterol) 42 and plasticizer (Compound; Nonanoic acid) 34.

ACKNOWLEDGEMENT: The work was carried out at the Institute of Biomedical Sciences along with active support of Innovation Centre, Bundelkhand University Campus, Jhansi. We thankfully acknowledge the support of the entire staff of Innovation Centre during experimental use of GC-MS, Rotaevaporator, Lyophilizer and other scientific equipments of the centre.

CONFLICT OF INTEREST: There are no conflicts of Interest.