It therefore covers everything from medicinal plants with powerful actions, such as Digitalis and Belladonna, to those with very gentle action. Secondary metabolism in a plant plays a major role in the survival of the plant in its environment. In addition, these compounds may be responsible for the beneficial effects of fruits and vegetables on an array of health related measures 2. Chemical principles from natural sources have become much simpler and have contributed significantly to the development of new drugs from medicinal plants 3.  The valuable  medicinal properties of different plants are due to presence of several constituents i.e. saponins, tannins, alkaloids, alkenyl phenols, glycol-alkaloids, flavonoids, terpenes lactones, terpenoids and phorbol esters 4. The rational design of novel drugs from traditional medicine obtained from plants offers new prospects in modern health care 5.

Bryonopsis lacinosa is a well known herb spread in throughout India from Himalayas to Ceylon, Mauritius, tropical Africa, Malaya, Phillippines, Australia and is one of the most versatile medicinal plants having a wide spectrum of biological activity. Stem is much branched, slender, grooved, glabrous. Tendrils are slender, scabrous above, smooth, beneath, margin denticulate, undulate or subcrenulate. Flowers monoeicious, often male and female clustered together. Fruits barriers, spherical yellowish-green or green-white, Seeds ovoid, with thickened, corrugated, margins. It is bitter and aperients, and is considered to have tonic properties 6. Plant flowers and fruits during the period from August to December.

Bryonopsis laciniosa leaves and seeds are anti inflammatory and febrifuge. They are used to treat flatulence, fever and reduce inflammation. The seeds are used in Homeopathy and Ayurveda as a tonic Seeds are antibacterial and anti-fungal. In Homeopathy, a tincture made from the roots of the lollipop plant is prescribed for the treatment of inflammation. A juice made from the leaves can be applied for pains and joints. Whole plant is used to treat ailments such as asthma, cough and bronchitis. Fruits are used as aphrodisiac, tonic, sharp, cutting, lancinating or tearing pain ,serous  inflammation; pain in serous cavities, with muscular tension.

Within a decade, there was a number of dramatic advances in analytical techniques including TLC, UV, NMR and GC-MS that were powerful tools for separation, identification and structure determination of phytochemicals 7. The aim of this study is to determine the organic compounds present in the Bryonopsis laciniosa(Linn)fruit (Family :  Cucurbitaeceae) extract with the aid of GC-MS technique, which may provide an insight in its use in traditional medicine.

The oven temperature was programmed from 110oC (isothermal for 2 min.), with an increase of 10oC/min, to 200oC, then 5oC/min to 280oC, ending with a 9 min isothermal at 280oC. Mass spectra were taken at 70 eV; a scan interval of 0.5 seconds and fragments from 45 to 450 Da. Total GC running time was 36 minutes. The relative % amount of each component was calculated by comparing its average peak area to the total areas. Software adopted to handle mass spectra and chromatograms was a Turbo mass 8.

Table 2 depicts that among the 30 compounds identified by GC-MS study 16 were already found to be biologically active. 2(3H)-Furanone, Octadecanoic acid, n-Non aldehyde and Nonanoic acid has found to posses antioxidant activity and 2-methyltetracosane is found to be a Free radical Scavenger. Ascorbic acid, Oleicacid, Octadecanoic acid detected in Bryonopsis laciniosa fruit posses anticancer, antioxidant and anti-inflammatory activity. Hexanoic acid, Acetic acid, 3-methylhept-3-yl ester are potent anticancer compounds. Most of the biologically active compounds present in Table 2 have been reported to posses antimicrobial activity. 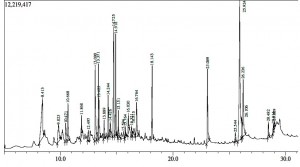 CONCLUSION: The results obtained in this study thus suggest that the identified phytochemical compounds are bioactive constituents. Therefore, the data generated from these experiment provide the chemical basis for the wide use of this plant as therapeutic agent for treating various ailments. This study offers a platform for using Bryonopsis laciniosa fruit as herbal alternative for various diseases including diabetes, cancer, microbial infections, inflammations etc.

ACKNOWLEDGEMENT: We would like to acknowledge Dr. S. Velavan, Director, Harman Institute of Science Education and Research, Thanjavur, Tamil Nadu for providing facilities to carry out the work. Grateful thanks are extended to T. Muthukumaran, Assistant Professor, Department of Biotechnology, Periyar Maniyammai University, Vallam, Thanjavur for helping in technical part of the work.