ABSTRACT: The aim of the present study is to identify the volatile, bioactive phytoconstituents present in the ethanolic extract of the leaves of Glochidion ellipticum Wt. (Euphorbiaceae) was carried out by using GC-MS analysis, while mass spectra of the compounds found in the extract was matched with the National Institute of Standards and Technology and Wiley library. Twenty seven components from leaves of the above said plant were identified. The active principles with their retention time, molecular formula, molecular weight and concentration (%) in the ethanol extract of leaf of G. ellipticum are obtained. This is the first report of documentation of active constituents from leaves of Glochidion ellipticum. The research reveals the potential of G. ellipticum leaves as a good source of bioactive compounds such as esters, ethers, alkaloids, alkenes, fatty alcohols, terpenoids, amines, porphyrin and silicon compounds that justify the use of this plant for its various ailments by traditional practitioners.

INTRODUCTION: Nature is the best combinatorial chemist and possibly has answers to all diseases of humankind. Green plants represent a reservoir of effective chemotherapeutants as they are non- phytotoxic, more systemic and easily biodegradable 1. Till now, natural compounds discovered from medicinal plants have provided numerous clinically useful drugs. A knowledge of the chemical constituents of plants is desirable not only for the discovery of therapeutic agents, but also because such information may be of great value in disclosing new sources of economic phytocompounds for the synthesis of complex chemical substances and for discovering the actual significance of folkloric remedies 2

The genus Glochidion of the family Euphorbiaceae has many representative species in India and most of them are chemically constituted with constituents like triterpenoid saponins, sesquiterpenoids, glycosides and alkaloids which vary from one plant to another 4. Therefore it can be considered that these plants may possess a lot of medicinal value which may be in one way or the other beneficial for the human well-being. Much attention can be given in complete exploration of the different species of this genus as they have not yet come in the limelight of the researchers.

MATERIALS AND METHODS: The leaves of Glochidion ellipticum Wt. were collected from the fringes of evergreen forests of Idukki district, Kerala, India and were authenticated and deposited at the PG and Research Department of Botany, Vellalar College for Women, Erode (Tamil Nadu), India. Fresh leaves were collected and air-dried at room temperature and then homogenized to obtain coarse powder. The powdered leaf was extracted with the solvent ethanol by hot extraction using soxhlet apparatus, collected and stored in a vial for further analysis 5.

Helium gas was used as a carrier gas at a constant flow rate of 1ml/min and the sample injected was 1μl; Injector temperature 250oC; Ion source temperature 200oC.

The oven temperature was programmed from 70° to 200°C at the rate of 10°C/min, held isothermal for 1minutes and finally raised to 250°C at 10°C/min. Interface temperature was kept at 250oC. Total GC run time was 37.50 min. The relative percentage of each extract constituent was expressed as percentage with peak area normalization.

The identity of the components in the extract was assigned by the comparison of their retention indices and mass spectra fragmentation patterns with those stored on the computer library NIST (Mc Lafferly, 1989) 6, WILEY (Stein, 1990) 7 and also with published literatures.

RESULT: The GC-MS analysis of the ethanolic extract of leaf of G.ellipticum revealed the presence of twenty seven bioactive phytochemical constituent that could contribute to the medicinal value of the plant. GC and MS running time was 37.50 minutes. The GC-MS chromatogram of the test plant is presented in Fig. 1. The active principles with their retention time (RT), molecular formula, molecular weight (MW) and peak area are presented in Table 1. The spectra of the compounds are matched with Wiley 9.0 and NIST libraries. 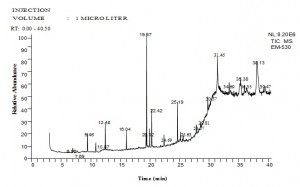 FIG.1: GC-MS CHROMATOGRAM OF THE ETHANOLIC EXTRACT OF LEAF OF GLOCHIDION ELLIPTICUM

TABLE 1: BIOACTIVE COMPOUNDS IDENTIFIED IN THE ETHANOLIC EXTRACT OF LEAF OF GLOCHIDION ELLIPTICUM BY GC-MS

DISCUSSION: Most of the identified compounds possessed many biological properties. For instance, 3,5-Pentano-13,17-diethyl-2,7,8,12,18-pentamethyl porphyrin (18.63%) is the major volatile constituent in the present study. Porphyrins occur widely in nature and play important roles in various biological processes. For example, they have found applications in virus destruction 8, cancer therapies as it selectively kill the tumor cells and their side effects are limited 9. It is also known to possess anti- microbial10 property. Glaucine is an alkaloid found in many species of the family Euphorbiaceae. It has bronchodilatory and anti-inflammatory effects 11 and is used medically as an anti-tussive 12. Animal studies demonstrate the ability of glaucine to decrease heart rate and lower blood pressure 13, anticonvulsant and antinociceptive properties 14.

Phytol is one among the twenty seven identified compounds in the present study. Phytol is a diterpene and is widely used as an anti-microbial, antioxidant, anti-tumor, anti-cancer, anti- arthritic, immuno stimulatory, anti-diabetic, chemo preventive, pesticidal and diuretic agent and has sunscreen properties 15-17. Similarly, the presence of phytol was detected in the leaves of Mallotus philippensis 18, Mimosa pudica 19, Mohan et al. 20 and Sudha et al.21 reported the aerial parts of Kirganelia reticulata and Fluggea leucopyrus, respectively.

The compound 3-Eicosane is an alkane is noted for its potent anti-tumor activity against the human gastric SGC-7901 cell line 22. Likewise, Sivasubramanian and Brindha 23 detected the aerial parts of Centratherum punctatum. Neophytadiene, a terpenoid compound has antipyretic, anti-inflammatory, anti-microbial and antioxidant activity. Correspondingly, Carretero et al.24 and Mendiola et al.25 identified Neophytadiene in Bursera simaruba and red alga Centroceras clavulatum which were used as analgesic and vermifugic, including a topical application for sores and inflammation.

CONCLUSION: The greatest lacuna existing in herbal-based medicines are lack of standards and validation studies. Terpenoid compounds were the chief constituents in the leaves, followed by alkaloids, silicon compounds, and aromatic hydrocarbons like alkenes, alkanes and fatty acid esters. Terpenoids are vital for life of most organisms and are currently being explored as anticancer agents in clinical trials. Considering the immense bioactive potentials of G. ellipticum in the present work, attempts can be made to scientifically validate and chemically standardize formulations for life threatening diseases.