ABSTRACT: The present study was carried out to detect the phytoconstituents present in the bulbous part of Eleutherine bulbosa using Gas Chromatography-Mass Spectrometry (GC-MS) analysis.  The mass spectrum of the crude ethyl acetate extract was compared with the available library sources (NIST08LIB, WILEY 8 and FAME).  A total of 24 compounds were identified. Most of the major constituents were phenolic in nature.  A phenolic compound detected to be present in highest concentration (34.20%) was, 1, 8-Naphthalenediol, 2, 7-diacetyl-3, 6-dimethyl.  Carboxylic and sterol compounds were present in minute quantities

INTRODUCTION: Plant substances continue to serve as viable sources of drugs for the human population and several plant-based drugs are in extensive clinical use 1. Medicinal plants now comprise a large group of economically important plants that provide the basic raw materials for indigenous pharmaceuticals 2, 3.

The World Health Organization (WHO), points out that the medicinal plants would be the best source to obtain natural compounds. The plant derived natural compounds such as alkaloids, phenolic compounds, quinones, tannins, saponins, terpenoids and flavonoids are reported to play a vital role in human health as these are utilized for the preparation of a variety of drugs 4, 5, 6, 7.

The Iridaceae is an ornamental plant family of about 85 genera and 1500 species, which has an almost worldwide distribution 8. Even though small in size, the family Iridaceae is particularly rich in phytoconstituents, especially of the phenolic type 9.  The genus Eleutherine consists of two species, Eleutherine bulbosa and E.latifolia distributed in Mexico, West Indies, Central and South America. The more common is E. bulbosa (syn. E. plicata), which is widely cultivated throughout the world especially in Africa and Asia (Philippines and Indochina) for its medicinal properties and is now naturalized there 10, 11.

Eleutherine bulbosa is an important element of American Indian pharmacopoeia and is one of the few Neotropical Iridaceae with known medicinal uses 12. It is interesting to note that even though E.bulbosa is an exotic ornamental plant, the local traditional healers in Kerala have identified its medicinal properties and the bulb is being used as a cure for various ailments. But there were only a few reports about the phytochemical constitution of the plant from Kerala.  Phytochemicals such as phenolic compounds, flavonoids, quinones, saponins and tannins were present in the ethyl acetate extract of bulbs of E.bulbosa and exhibited bioactivity 13. The aim of the present study is therefore to conduct GC-MS analysis of the ethyl acetate extract of E.bulbosa bulbs.

The plant material was collected from Kariyavattom, Thiruvananthapuram.  It was identified and authenticated by the Curator, Department of Botany, University of Kerala, Kariyavattom, Thiruvananthapuram. The plant material was also verified by comparison with specimens of E. bulbosa from Botanical Survey of India, southern circle, Coimbatore. A voucher specimen (Accession Number - KUBH 5802) has been deposited at the Kerala University Botanical Herbarium.

From the collected plants, underground bulbs were removed, cleaned and air dried in room temperature. The dried bulbs were homogenized using a mechanical grinder to obtain fine powder. About 15gm of the bulb powder was extracted with 150ml ethyl acetate (76-77°C), 12h using the Soxhlet apparatus. The extract was concentrated to dryness under vacuum in a rotary evaporator at 45°C. The concentrated crude ethyl acetate extract was stored at 4°C in sterile air tight bottles.

A 1μl aliquot of acetone solution of the ethyl acetate extract from E.bulbosa was injected into the GC-MS (QP-2010, Shimadzu, Japan). The VF-5MS column was 30.0m in length, 0.25mm in diameter and 0.25μm in thickness. The carrier gas was Helium. The GC oven temperature program was 70ºC. The fraction was held for three minutes, raised at 10ºC/minute to 300ºC and again held for nine minutes. The injector temperature was set at 240ºC. The mass spectrometer was electron impact mode, electron energy was -70ev, source temperature: 200ºC and the scan range was 40-1000m/z.

Identification of the components:

The identity of the components in the ethyl acetate extract was assigned by the comparison of their retention time similarity indices and mass spectra fragmentation patterns with NIST08 LIB, WILEY 8 and FAME. 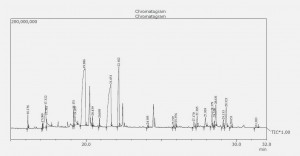 The phytoconstituents in the ethyl acetate extract of the plant, their retention time (RT), concentration in percentage, molecular formula and molecular weight is provided in the Table 1.

DISCUSSION: Gas Chromatography is a technique used to separate compounds that might be present in a sample.  GC-MS analysis can identify pure compounds present at less than 1mg 14. The time it takes for any given compound to travel the length of the column is referred to as its retention time (RT). The RT for a given compound is an identifying characteristic.  The detector for the

GC is the Mass Spectrometry (MS) detector. As a drug exits the end of the GC column it is fragmented by ionization and the fragments are sorted by mass to form a fragmentation pattern. Like the retention time (RT), the fragmentation pattern for a given drug is unique and therefore is an identifying characteristic of the drug. It is so specific that it is often referred to as the molecular fingerprint.

GC MS analysis of the present study revealed the presence of 24 compounds in ethyl acetate extract of E.bulbosa.  Presence of 1, 8-Naphthalenediol, 2, 7-diacetyl-3, 6-dimethyl has not been reported elsewhere and therefore the present report appears to be the first report of the presence of this compound. Literature perusal showed that the family of 1, 8 naphthalene diol and their derivatives act as potent anitoxidants 15.

Propanedinitrile, [(3, 4, 5-trimethoxyphenyl) methylene has not been reported from this plant previously. Nitriles occur naturally in a diverse set of plant and animal sources. Over 120 naturally occurring nitriles have been isolated from terrestrial and marine sources. Propane nitrile compounds, showed antimicrobial, antitumour activity and cytotoxic activity 16, 17.   Benzene dicarboxylic acid di-n-octyl esters or Di-n-octyl phthalates (DOP) reported to have antibacterial activity 18, 19, 20.  Usually, the presence of DOP in plants is from environmental pollution, such as the release of DOP from plastic films. Eleutherine bulbosa bulbs have 11.97% of DOP, which is probably a high quantity. It appears that the bulbs of the plant possess a relatively stronger ability to accumulate DOP compared to the other plants and therefore can possibly act as agents for phytoremediation. N-hexadecanoic acid is present in the crude ethyl acetate extract.  N-hexadecanoic acid (palmitic acid) possesses antifungal, antioxidant, nematicidal, haemolytic, antimicrobial and antimalarial properties 21, 22.

CONCLUSION: The present study is the first report on the GC-MS analysis of ethyl acetate extract of Eleutherine bulbosa.  About 24 chemical compounds were identified from the same.  Most of the compounds detected form GC-MS analysis of ethyl acetate extract of E.bulbosa exhibited several bioactivities including antibacterial and antitumor potentialities.  Further purification and isolation of pure compounds is needed to find out which is the actual compound/s responsible for the bioactivity.

ACKNOWLEDGEMENT: The authors are thankful to Dr. P.M. Radhamany, Professor. and Head, Dept. of Botany, University of Kerala, Kariavattom, for providing the required facilities for the conduct of this research work