ABSTRACT: Sugarcane is the major cash crop of the Indian tropical and sub-tropical region. Mostly the foremost part of Indian economy is based on sugarcane crop, which is cultivated major state in India. Phyto-components are the compound that occurred in plant naturally and play important role for biologically activity (Anti fungal, Anti cancer Anti diabetic etc), to prevent the many disease, scavenging and chelating the free radicals. In the present study we identified the phytocomponent presence in juice sample of Mungo 254 (Saccharum barberi) through GC-MS analysis. The major compound sucrose (30.64%) with retention time 12.18 and lower percentage compound was Pentanal, 2-methyl (0.10%) with 6.48 retention time. The identified compounds having biological and pharmacological activity such as Antimicrobial, Antifungal, Anticancer, Antioxidant, Antimutagenic and Hypercholesterolemic etc

INTRODUCTION: Sugarcane belongs to the grass family (Poaceae) and is a long duration, high water and high nutrient-demanding crop which ranks amongst world’s best biomass producer apart from contributing to ~95% of the global sugar pool thereby accounting for 80% of sugar produced. Sugarcane is a tropical, perennial grass that forms lateral shoots at the base to produce multiple stems, typically 3-4m high and about 5 cm in diameter. Sugarcane originated from tropical South and Southeast Asia but different species originated in different locations, with Saccharum barberi originating  in India so also called “India cane”. 1

Sugarcane is an important crop, as it is renewable and a natural agricultural resource providing sugar, bio-fuel, fibre, fertilizer and myriad of by products/co-products with ecological sustainability. The other products directly or indirectly obtained from sugarcane are used for making white sugar, brown sugar (Khandsari), Jaggery (Gur) and ethanol. The main by-products of sugar industry are bagasse (used in paper industry) and molasses (for making ethanol). Sugarcane juice is usually common beverage and commercialised from the cane by using mils and it can be used as nutritional supplement. 2

The role of phytocomponents in protecting tissues and cells against destructive effects of free radicals has been greatly studied. The market in India for antioxidant rich supplements, fortified drinks and snacks has now advanced well into the mainstream, with products like green tea, antioxidant enriched drinks, health bars, powder drink mixes, etc. The by-product of sugarcane industry, blackstrap molasses, has been recognized for its therapeutic properties. Considering, these aspects it becomes worthwhile to have a deeper insight for antioxidant properties of sugarcane.

Gas Chromatography (GC) and mass spectrometry (MS) provides a powerful tool for identifying the various compound presences in the sample. GC separate mixture in to individual components and the MS detects components or molecules on the basis of their charged ion and mass to charge ratio.

The objective of the present study was to GC-MS analysis of juice sample from the selected plant for the identification of phyto-components and their relation to biological and pharmacological activity.

Sugarcane cultivar Mungo 254 (Saccharum barberi) was procured from G.B. Pant University of Agriculture and Technology, Uttrakhand in the month of September 2013.

To obtain the juice sample from Mungo 254 sugarcane plant, the mature cane was crushed in cane crusher. Juice (100ml) of sugarcane was then dried in lyophilizer (Labconco, USA) under reduced pressure to obtain the powder form and dissolved in n-hexane.

GC-MS analysis of the sample:

GC-MS analysis of this sample was performed using a regular Perkin Elmer Auto System XL GC-MS analyzer. For GC-MS detection, an electron ionization energy system with ionization energy of 70eV was used. Helium gas (99.999%) was used as the carrier gas at a constant flow rate of 1.51 ml/min and an injection volume of 2μl was employed. Total GC running time was 22 min. Software adopted to handle mass spectra and chromatograms were Turbo Mass.

Identification of compounds was based on the molecular structure, molecular mass and calculated fragments. Interpretation on mass spectrum GC-MS was conducted using the database of NIST (National Institute Standard and Technology) having more than 62,000 patterns and Wiley library. The name, molecular weight and structure of the components of the test materials were ascertained by correlating with the library. The relative percentage amount of each component was calculated by comparing its average peak area to the total areas.

The compounds present were of different classes such as steroids, acids, phytosterols, alkaloids, ketones, ester, etc. Among different compounds identified Isosorbide Dinitrate, 4H-Pyran-4-one, 2, 3-dihydro-3,5-dihydroxy-6-methyl-, 2-Desoxy-ribose, Oleic Acid and  n-Hexadecanoic acid were found to be present in large amount as compared to other compounds based upon the peak areas of the compounds. Also, among these compounds, sucrose was the most abundant (30.64%) compound identified. 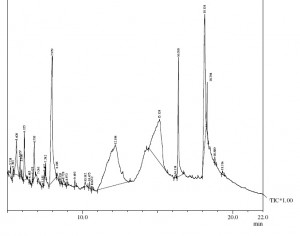 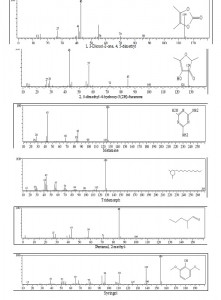 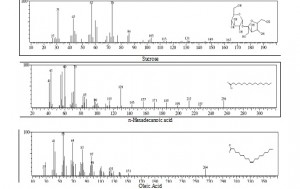 Irrespective of the amount or concentration (high or low) in which these compounds were found to be present, almost all these compounds have been reported to possess some pharmacological or the other biological activity (Table 2).

For instance, Syringol and 4-hydroxydihydro-2(3H)-furanone are known to possess antioxidant activities. Many phytochemical compounds identified such as, Tridemorph, 27 Pentanal, 2-methyl, 4H-Pyran-4-one, 2,3-, dihydro-3,5-dihydroxy-6-methyl-, 4-hydroxydihydro-2(3H)-furanone, 2-Furancarboxaldehyde, 5-(hydroxymethyl)- have been reported to be antimicrobial (antibacterial or antifungal) in nature. 7, 28 n-Hexadecanoic acid is a significantly important phytochemical compound, also found to be present in the extract and is known to have antioxidant, 14, 23 hypocholesterolemic, nematicide, pesticide, antiandrogenic, hemolytic,5-alpha reductase inhibitor activities. 10 Oleic has been reported to be effective in treatment of skin papillomas. 26 2-benzenedicarboxylic acid and Palmitic acid are two other biologically active compounds, which possess anti tumor and anticancerous properties. Isosorbide dinitrate has been reported to be utilized in vasodilator therapy of heart failure. 29

CONCLUSION: From the results obtained from GC-MS analysis of juice of sugarcane, it can be concluded that beside being sugar (carbon) source the plant also exhibits several biological and pharmaceutical properties which provide an insight to the medical value of sugarcane plant which can be further evaluated to optimize how the plant may be utilized to explore its medicinal potential.