GC/MS ANALYSIS AND ANTIMICROBIAL ACTIVITY OF DIETHYL ETHER FRACTION OF METHANOLIC EXTRACT FROM THE STEM BARK OF ANNONA SENEGALENSIS PERS.

GC/MS ANALYSIS AND ANTIMICROBIAL ACTIVITY OF DIETHYL ETHER FRACTION OF METHANOLIC EXTRACT FROM THE STEM BARK OF ANNONA SENEGALENSIS PERS.

The Diethyl ether fraction of the Methanolic extract of Annona senegalensis (Pers) stem bark was prepared in yield of (0.16%). Preparative Thin Layer Chromatography analysis of the fraction resulted in the identification of two spots with antimicrobial activity. Subsequent GC/MS analysis of these spots resulted in the identification of ten components (spot one) and fourteen components (spot two). The fraction showed significant antimicrobial activity against clinical isolates of E. coli, S. enteriditis and S. dysenteriae

INTRODUCTION: Plants are recognized for their ability to produce a wealth of secondary metabolites 1. Many of these natural products have been shown to present interesting biological and pharmacological activities and are used as chemotherapeutic agents or serve as the starting point in the development of modern medicines 2.

In developing countries where antibiotics can be used on an unrestricted basis, the emergence of antibiotic resistant pathogenic bacteria has caused considerable public health concern. The increasing failure of chemotherapeutics and the antibiotic resistance exhibited by pathogenic microbial infectious agents   has   led to the screening  of  several  medicinal  plants  for  their  potential antimicrobial activity 3, 4.

The success story of chemotherapy lies in the continuous search for new drugs to counter the challenge posed by resistant strains of microorganisms. Besides, the more current and  most  effective  antibiotics  are very  expensive  and  out  of reach of  many  Africans,  majority  of  whom  reside  in the rural  areas.

The investigation of certain indigenous plants may yield useful results.  A large number of plants indeed  were  used  to combat  different  diseases  and  known to  posses  antimicrobial activity  5. Some bacteria   showing    resistance   to certain antibiotics have also been shown to be sensitive to extracts of both garlic and clove 5.

Annona senegalensis, Pers is a shrub that belongs to the family Annonaceae and is usually found growing in semi-arid to sub-humid regions of Africa. It is native and widely spread from Senegal to Nigeria, also Central African Republic. The common names of the plant are wild custard apple (English), “Gwanda dagi” (Hausa), “Annone, pomme cannelle du Senegal” (French) 6.

Ethno medically, the stem bark of A. senegalensis is used by local populations all over Africa in treating guinea worms, diarrhea and especially in northern Nigeria, gastroenteritis, snake bites, toothache and respiratory infections 7. The leaves are used in treating pneumonia, and as a tonic to promote general well-being. A decoction from the roots is used to stop stomach ache, venereal diseases, chest colds and dizziness.

Although this plant has found wider applications traditionally, there is no documented information on its antimicrobial effects.

The purpose of this work was to investigate the antimicrobial potentials of the diethyl ether fraction of stem bark methanolic extract of this plant against clinical isolates of Escherichia coli, Salmonella inderitidis and Shigella dysenteriae and to analyse the phytocomponents using Gas Chromatography-Mass Spectroscopy (GC-MS).

Test organisms: The test organisms were clinical isolates of E. coli, Salmonella enteritidis, and Shigella dysenteriae. They were obtained from the Microbiology Laboratory of the Ahmadu Bello University Teaching Hospital (ABUTH), Shika, Zaria-Nigeria.

Collection and preparation of plant material: A leaf of Annona senegalensis, Pers was initially collected from the plant in the bush around the Samaru District of Zaria, Kaduna state and identified in the herbarium unit of the Department of Biological Science, A.B.U. Zaria, where a voucher specimen number 900167 was deposited. Then, the stem bark of the plant was collected from the same source, washed with distilled water and air-dried for 21 days.

The size was reduced using a knife and coarsely powdered using a mortar and pestle and then further reduced to powder using an electric blender (Philips). The powder was then sieved using sieve number 20 mesh (British Standard) to obtain a fine powder which was referred to hence forth as plant material.

Preparation of Stem Bark Diethyl ether fraction: Nine hundred grams of the powdered stem bark of Annona senegalensis were weighed into a conical flask and defatted with 2.5 liters of petroleum ether and then extracted with 2 liters of methanol for a period of 72 hours with shaking at 12 hours intervals. The extract obtained was filtered using Whartman No.1 filter paper. The filtrate was evaporated to dryness under reduced pressure at 70°C to obtain a dried extract (or residue) that was weighed to give 61.56g of methanolic extract. This extract was dissolved in 500ml of distilled water (with warming) and further fractionated by extracting it with 500ml each of ethyl acetate, diethyl ether and n-butanol separately. Each portion was concentrated on a water bath at a temperature of 60oC to obtain the ethyl acetate, n-butanol and diethyl ether fractions of methanolic extract respectively.

Analytical TLC: The diethyl ether fraction was then dissolved in a small quantity of the solvent diethyl ether. With the aid of a capillary tube, spots were applied on the ends of pre-coated plates about 1cm from the edge of one side. The spots were then allowed to dry and the plates were placed into a developing tank saturated with the mobile phase solvent system consisting of Benzene:Chloroform:Methanol in the ratio of 43:43:13. When the solvent front travelled three quarter of the plates, they were removed and the solvent front marked immediately and allowed to dry at room temperature. The plates were then analyzed via visualization under ultraviolet (UV) lamp. The distances travelled by each spot were measured with a ruler and recorded.

Preparative TLC of the Diethyl ether Fraction: Spots of the fraction were applied on the ends of the plates about 1cm from the edge of one side and then developed and viewed as described above. The various spots were carefully scrapped off, dissolved separately in diethyl ether and centrifuged at 2500g for 20 minutes. The supernatants were then concentrated by allowing them to evaporate at room temperature and the partially purified compounds obtained were stored in small vials in a desiccator until needed.

Determination of the Antimicrobial Activity of the Isolated Components: The antimicrobial activity was determined using the agar well diffusion method. In this method, 0.1ml of a 103  dilution of a 24 hour old broth culture of each test organism was uniformly spread on the surface of a sterile nutrient agar plate and allowed to dry. Three holes of 9mm diameter each were made on the inoculated plates with sterile cork borers (No. 4) and were separately filled aseptically with 0.2ml each of 1700µg/ml, 1300µg/ml, 1500µg/ml, 4700µg/ml and 1600µg/ml of spots 4, 5, 6, 7 and 8 using a sterile micropipette and appropriately labeled. The plates were then incubated at 37°C for 24 hours and the diameter of zone of inhibition around each hole was measured and recorded. Antibacterial activity was determined by measuring diameter of zone of inhibition around each hole. The spots with the highest activity were then sent for GC-MS analysis.

GC-MS Analysis: The GC-MS analysis of the extracts of  spots 4 and 6 of the TLC plates was performed using a GC/MSQP2010 PLUS SHIMADZU, Japan gas chromatography equipped with a Elite 5 capillary column (5% Diphenyl 95% dimethyl poly siloxane(30nm×0.25mmID×0.25µmdf) and mass detector turbomass gold of the company which was operated in EI mode. Helium was the carrier gas at a flow rate of 1ml/min, the injector was operated at 250°C and the oven temperature was programmed as follows; 60°C for 15min, then gradually increased to 280°C at  15minutes. 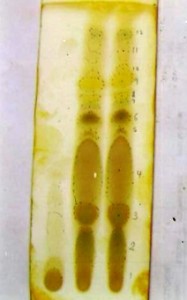 PLATE 1: TLC CHROMATOGRAM OF DIETHYL ETHER FRACTION OF THE METHANOLIC EXTRACT OF STEM BARK OF A. SENEGALENSIS 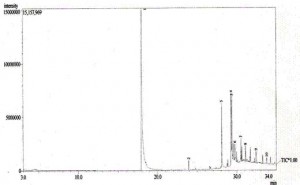 FIGURE 1.0: GC-MS CHROMATOGRAM OF SPOT 4 OF THE TLC SEPARATED DIETHYL ETHER FRACTION OF STEM BARK METHANOLIC EXTRACT OF A. SENEGALENSIS. 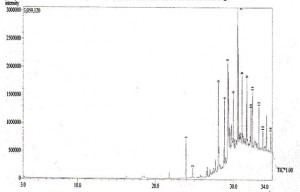 FIGURE 1.1: GC-MS CHROMATOGRAM OF SPOT 6 OF THE TLC SEPARATED DIETHYL ETHER FRACTION OF STEM BARK METHANOLIC EXTRACT OF A. SENEGALENSIS.

TABLE 1.2: ANTIMICROBIAL ACTIVITY OF THE TLC SEPARATED SPOTS OF THE DIETHYL ETHER FRACTION OF THE METHANOLIC EXTRACT OF STEM BARK OF A. SENEGALENSIS.

DISCUSSION: Thin Layer Chromatography of the diethyl ether fraction revealed twelve spots under ultra violet light (Plate 1) which were separately isolated to obtain twelve samples of partially purified compounds corresponding to the spots. Samples 1 to 3 and 9 to 12 were not active against any of the organisms while samples 4 to 8 were active on at least one of the organisms. This is in agreement with the findings of 10, 11 who reported that the activity of plant extracts can sometimes change after fractionation and a pure component eventually obtained may lack the activity of the original extract.

Within this range, sample 4 had a wide spectrum of activity (all organisms were sensitive to it) while sample 6 was more specific to S. dysenteriae. These two samples were then sent for further analysis using Gas Chromatography-Mass Spectroscopy (GC-MS). This is for partial identification of the active principles responsible for the observed anti microbial activity. Spot 4 revealed a chromatogram with ten peaks (figure 1.0) and spot 6 revealed 14 peaks (figure 1.1) with each peak corresponding to a compound. The identification of phytochemical compounds was based on retention time, probability, peak area, molecular weight and molecular formula.

Specifically, the antimicrobial activity-guided fractionation of the diethyl ether fraction resulted in the isolation of the following compounds in spot 4 (table 1.0): 1, 2 benzenediol, butylated hydroxytoluene (BHT), n hexadecanoic acid, oleic acid, octadecanoic acid, 9, 17-octadecandienal, pentadecane, tetratriacontane and squalene. Amongst these compounds, 1, 2-benzenediol, n-hexadecanoic acid, oleic acid, octadecanoic acid and tetratriacontane were more abundant with probability indices of 97, 94, 90, 92 and 94 respectively and have antimicrobial activity. 1, 2-benzenediol or catechol is a hydroxylated phenol which has been shown to be toxic to microorganisms. It has two hydroxyl groups. The site(s) and number of hydroxyl groups on the phenol group are thought to be related to the relative toxicity of hydroxylated phenols to microorganisms with evidence that increased hydroxylation results in increased toxicity 12.

In addition to this, some authors have found that more highly oxidized phenols are more inhibitory to microorganisms 13. The mechanisms thought to be responsible for phenolic toxicity of microorganisms include enzyme inhibition by the oxidized compounds possibly through reaction with sulfhydryl groups or through more non-specific interactions with the proteins 14.

Triterpenes attract attention because of their biological activity 15. Squalene is a triterpene and has been reported in to have antimicrobial activity 16. The mechanism of action of triterpenes is not fully understood but speculated to involve membrane disruption by the lipophilic compounds 17.

Also carboxylic acids like n-hexadecanoic acid and octadecanoic acid have antimicrobial activity as have been reported by 18,16. Oleic acid is a long chain unsaturated fatty acid. Just like linoleic acid, it has been found that this acid inhibits the bacterial enoyl-acyl carrier protein reductase (Fab1), an essential component of bacterial fatty acid synthesis which has served as a promising target for antimicrobial drugs 19. Other unsaturated fatty acids like palmitoleic, linoleic and arachidonic acids also exhibit the inhibition of Fab 1.

However, neither of the saturated form (stearic acid) nor the methyl esters of oleic acid inhibits Fab 1. These Fab 1 inhibitory activities of various fatty acids and their derivatives very well correlates with the inhibition of fatty acid biosynthesis using (14C) acetate incorporation assay and importantly also correlates with antimicrobial activity 19.

Similarly, GC-MS analysis of spot 6 revealed the presence of the following  compounds (table 1.1): phenol, 2, 6 bis(1, 1-dimethylethyl-4methyl, methylcarbamate, hexadecane, n hexadecanoic acid, 13-hexyloxacyclotridec-10-en-2one, oleic acid, tetracosane, 9octylheptadecane, tetratriacontane, tetracosane, 12-methyl-E, E-2, 13-octadecadien-1-ol, heneicosane, squalene and 12-mehtyl-E, E-2, 13-octadecadien-1-ol. Just like in spot four, most of these compounds including n-hexadecanoic acid, oleic acid, squalene have antimicrobial activity. However, it is not clear if there is any synergism in the activity of these two spots. This could not be verified because it was beyond the scope of this work.