ABSTRACT: Background: Type 2 diabetes is a major lifestyle disease often seen with comorbidities or complications. This study is conducted to find out the gender-wise prevalence of comorbidities and medication adherence among the diabetics in Malappuram. Methods: A cross-sectional study was conducted among the 179 diabetics selected for the study. A pre-tested interview schedule was used to collect information about their socio-demographic details, clinical characteristics, co-morbidities and awareness on complications. Anthropometric measurements and blood pressure of each patient were recorded. Body Mass Index, Waist Hip Ratio and Household Dietary Diversity Score were calculated. The results were analyzed statistically. Results: The selected diabetics comprised of 46.4% males and 53.6% females. Around 91% of them were sedentary workers. Early-onset of diabetes at the age of 35-45 years was reported among males (p<0.05). Blood sugar monitoring, insulin usage, and exercise were higher among males while the medication regularity was higher among females. Higher prevalence of obesity (62.5%), hypertension (53.1%) and hypercholesterolemia (59.5%) were observed among the female diabetics. The prevalence of retinopathy (15.7%) and heart diseases (13.3%) were higher among the males. 76 percent of diabetics had poor awareness of complications of diabetes in which females outnumbered males (p<0.01). Conclusion: High prevalence of comorbidities and lack of awareness on complications emphasizes the necessity of mass and individual counseling on diabetes and its self-care measures to the diabetics.

INTRODUCTION: Type 2 diabetes is an alarming global epidemic increasing due to population growth, aging and obesity. In 2017, the prevalence of diabetes among men and women was 8.9% and 8.4% respectively 1. It is the seventh leading cause of death, and along with obesity and hypertension, it leads to heart diseases, which are the first leading cause of death in the world 2.

India is the second-largest contributor to regional mortality, with one million deaths attributable to diabetes 3. Poor control of diabetes results in complications like cardiovascular diseases, renal dysfunction, leg amputation, and blindness.

Several studies reported the evidence of multiple co-morbidities making diabetes care more difficult, expensive and also increasing the risk of complications 4. The consequences of diabetes can be prevented or delayed with diet, physical activity, regular monitoring, and medication. A detailed study on comorbid conditions will help the health care providers to be vigilant and prepare themselves to meet the demands caused by them 4.

Hence, a community-based study was carried out in the Malappuram district of Kerala to determine the gender-based prevalence of comorbidities and medication adherence among the diabetics.

MATERIALS AND METHODS: Two wards were selected from the randomly selected Kondotty Municipality, situated in the Malappuram district of Kerala. A cross-sectional survey was conducted among the type 2 diabetic patients residing in the randomly selected houses of the wards for three consecutive months. Pregnant women, bedridden or severely ill patients and those who were not willing to participate were excluded from the study. Hence, 179 diabetics in the age group of 30-75 years and willing to participate were included in the study.

A house to house survey was conducted among the selected diabetics to obtain information on personal details, socio-demographic characteristics, family history of diabetes, clinical characteristics, diet and activity pattern, comorbidities or complications and awareness on complications of diabetes using a pre-tested interview schedule. Household Dietary Diversity score (HDDS) for each patient was calculated using FAO-WFP guideline 5.

Physical and Biochemical Parameters: Anthropometric measurements of the diabetic patients were taken as per the WHO protocol 6. Height, waist and hip circumferences of each person with diabetes were measured using a non-stretchable measuring tape, and the bodyweight was assessed with the help of Health genie (HD 221) electronic weighing machine. For each patient, Body Mass Index (BMI) and Waist Hip Ratio (WHR) were calculated. BMI was further categorized into underweight (BMI <18.5kg/m2), Normal (BMI 18.5-22.9 kg/m2), Overweight (BMI 23- 24.9 kg/m2) and Obese (BMI ≥25 kg/m2).

Ethical Considerations: The study protocol was approved by the Institutional Ethical Committee of Gandhigram Rural Institute (Deemed to be University), Tamil Nadu (No. GRI/IECRHAS/ 2018/09). The study participants were enrolled in the study after getting written informed consent from each participant.

Statistical Analysis: The data was analyzed in SPSS (IBM) 23.0 version. Descriptive analysis was carried out to obtain means and standard deviations. The relationship between gender and other variables were determined through Chi-Square tests. The tests were conducted at 95% confidence level and the results with p<0.05 was taken as statistically significant.

Baseline Characteristics of Diabetics: The selected diabetics comprised of 46.4% males and 53.6% females. The mean age of the male diabetics was 54.27 ± 9.89 years, and that of females was 55.27 ± 10.88 years. The socio-economic and demographic characteristics of the people with diabetes are given in Table 1. There was significant difference between male and female patients in their education, occupation, marital status and physical activity (p<0.001).

Clinical Profile of Diabetics: The study showed an early onset of diabetes in the age of 35- 45 years among most of the males while it was reported as 45-55 years in the majority of the female patients Fig. 1. However, gender was not significantly related to the onset of diabetes (p=0.089; p>0.05). In around 66℅ of diabetics, the disease started between 35-55 years of age. 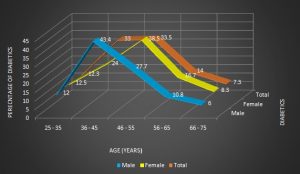 FIG. 1: AGE OF ONSET OF DIABETES

The duration of diabetes in the majority (60.3%) of the diabetics was less than 7 years. Most of the patients (87.7%) were undergoing allopathy treatment. Five percent of the patients took no treatment in which females outnumbered males. Most of those patients on treatment were taking oral drugs only. Insulin usage was higher among males Table 2. Few people with diabetes stopped their medication once they found their blood sugar levels as normal during monitoring.

Also, more than one-fifth of the patients reported irregular intake of oral medicines in which most of them were males. The regularity of taking medicines was significantly associated with gender (p<0.05). Even though the practice of blood sugar monitoring was more regular among men, there was no significant association between gender and blood sugar monitoring (p>0.05).

Practices Followed to Control Diabetes: Majority of the diabetics (95.2% males and 89.6% females) used medication to control diabetes Fig. 3. Around 65% males and 61.5% females practiced dietary changes. The mean HDDs of the diabetic population studied was 7.6 ± 0.89. Even though the practice of exercise was higher among males (20.5%), the overall percentage of diabetics performing exercise was less. There was significant relationship between gender and exercise among the diabetics (p<0.05). 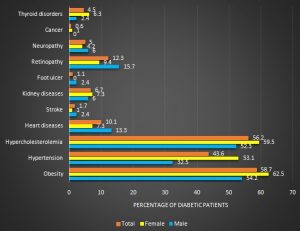 TABLE 4: CONTROL OF BLOOD PRESSURE IN DIABETICS BY GENDER

DISCUSSION: Among the diabetic patients selected, the higher percentage of women were noted, as documented in the earlier studies in Kerala 11-13. Early-onset of diabetes at the age of 35-45 years was observed among the males and few diabetics had the disease in 25-35 years. The shift in the age of onset of diabetes at younger age was communicated in the previous studies 14, 15. Lower age at onset of diabetes and poor glycemic control will increase the chances for vascular complications 16.

As stated in the previous studies, most of the patients were on allopathy treatment 12, 17. Few patients received no treatment, and a similar observation was reported in the Ernakulam district of Kerala 18. Majority of the diabetics were on oral medication while very few patients used insulin. Previous studies in Kerala and other parts of world documented the same finding 11, 17-19. This might be credited to the social and mental barriers among the diabetics and health care workers in starting insulin treatment. Among those patients using insulin, men outnumbered women. Few patients stopped taking medicines on their own as their blood sugar level became normal. This is similar to the findings reported in Karnataka and Malaysia 20, 21. Among those under medication, most of them took medication regularly. Regularity in medication was significantly higher among female patients as described in an earlier study conducted in southern India 22. Around half of the patients had regular blood sugar monitoring in which males outweighed females. Better medication adherence and blood sugar monitoring were reported in the previous studies 11, 12, 20-22. But they were found to be poor in a study conducted in rural Kerala 23. Majority of the diabetics had a positive family history of diabetes as reported in earlier studies 13, 16.

Nearly one-third of the patients were dependent on medicines alone to control diabetes without practicing any lifestyle modification. Few patients practiced exercise, and among those practicing dietary modifications, the dietary changes were poor as reported in earlier studies 11, 12, 22. Also, majority of the diabetics were sedentary workers, and similar finding was observed in previous studies 24, 25. Sedentary activity and lack of exercise were significantly higher in female diabetics.  Such findings were documented in the previous studies 26, 27.

As communicated in several studies, a high prevalence of comorbidities and complications was reported among the patients 4, 11, 18, 19, 29. More than half of the patients had obesity, hypertension, and hypercholesterolemia. Several other studies also showed that these three diseases are the common comorbid conditions of diabetics 11, 18, 19, 28, 29.

Among the patients, the prevalence of abdominal obesity was higher than that of general obesity as documented in few other studies 13, 30. Moreover, abdominal obesity was observed higher among females than males. Other morbidities such as hypertension, hypercholesterolemia, and thyroid disorders were also higher among women. Previous studies reported higher prevalence of comorbidities among female diabetic patients 26. The prevalence of complications such as heart diseases, retinopathy, stroke, and neuropathy was higher among men. Retinopathy was the most common complication reported among the diabetics, followed by heart diseases and kidney disorders. Also, in some of the previous studies, retinopathy was reported as the most prevalent complication among diabetic patients 16, 31.

CONCLUSION: Although, better medication adherence was observed among the patients, poor lifestyle modifications and lack of awareness on diabetes and its complications were noted. Moreover, the prevalence of comorbidities and complications were higher among them. Poor awareness of diabetes management and the communication gap with health care providers may be the major contributing factors. Hence, diabetes education programs providing guidance in self-care practices especially lifestyle changes are essential for the diabetic community.

ACKNOWLEDGEMENT: Our sincere thanks to the University Grants Commission for providing UGC- FDP Teacher fellowship to Ms. N. V. Fatimathu Zuhara for the completion of study. We also thank Mr. Muthukumar, Assistant Professor, Gandhigram Rural Institute – (DU), Tamil Nadu for his valuable guidance in the statistical analysis of the data.