GENERAL INVESTIGATIONS ON THE HEPATOPROTECTIVE POTENTIAL OF PHYLLANTHUS NIRURI

GENERAL INVESTIGATIONS ON THE HEPATOPROTECTIVE POTENTIAL OF PHYLLANTHUS NIRURI

ABSTRACT: Phyllanthus niruri commonly known as Keezhanelli is traditionally used as a medicinal plant in many parts of the world. In this study, phytochemical screening was the hepatoprotective potential of the plant investigated. Two plant forms, namely, dry powder and fresh leaves were used. Aqueous and methanolic extracts were prepared from both forms, and the experiments were carried out. The hepatoprotective potential of the Phyllanthus niruri extracts was evaluated by checking the enzyme activity in CCl4 toxicity-induced chicken liver. The liver was subjected to different extracts and the SGPT, LDH levels were calculated. The methanolic extracts displayed higher SGPT levels in the liver after CCl4 treatment (~121 IU/L) while the dry powder aqueous extracts were the lowest (79.5 IU/L). The LDH levels were the highest for fresh leaves methanolic extracts (323.23 IU/L) while the dry powder aqueous extracts (303.01 IU/L) had the lowest level among all extracts. Thus the fresh leaves methanolic extract was proven to be the most efficient out of all of the Phyllanthus niruri extracts. All of the extracts displayed hepatoprotective activity. It can be good herbal medicine and is consumed in all forms by people.

INTRODUCTION: Phyllanthu sniruri, commonly known as ‘Keezhanelli’ in Tamil Nadu and ‘Jaundice plant’, is a tropical plant that averages to around 50-70 cm in height. It has a lean appearance and bears several fruits at a time. Phyllanthus niruri Linnaus., is a small herb spread throughout the tropical and subtropical countries of the world. It is an annual plant and found mostly in the coastal areas in India. It belongs to the Euphorbiaceae family and is widely known for having medicinal properties, used across the world 1. Phyllanthus is a large genus, consisting of more than 700 species, can be classified into 11 subgenuses.

The most popular 24 species belong to subgenus Kirganelia, Cicca and Phyllanthus and are traditionally used by different nationalities 2. It has been used for a wide range of diseases in South and south‐east Asian traditional medicine, including but not limited to jaundice, diarrhoea, dyspepsia, genitourinary infections, and renal stones 3. Also found in South America, China, and South Africa 4. The Ayurvedic System of medicine suggests that the whole plant of Phyllanthus niruri can be used for medicinal purposes.

It has been accepted as acrid, cooling, alexipharmic. Ayurveda recommends its use for bronchitis, leprosy, anaemia, urinary discharge, asthma, etc. Local people of Chhattisgarh and Jharkhand use it for the treatment of skin diseases, indigestion, cough, ulcers etc. 4. The commonly used forms are either the fresh leaves that are taken from the plant while it is still at a bright green stage or the dry powdered form.

The leaves at the mature state is plucked and dehydrated, crushing them into a fine powdered texture and sold. Extracts of this herb have been proven to have therapeutic effects in many clinical studies. Hot water extract of the entire plant is administered orally to reduce fevers and as a laxative 5. Infusion of the green root is taken orally to treat heavy menstrual periods 6. Fresh plant juice is taken orally for genitourinary disorders; the fruit is used externally for tubercular ulcers, scabies, and ringworm 7. The dried plant's hot water extract is administered orally for diabetes 8 for asthma in ayurvedic medicine 9. Fresh leaf juice or fresh root juice are taken orally for venereal diseases. Decoction of the dried entire plant is administered orally to treat venereal diseases 10. Phyllanthus niruri exhibited many valuable properties. One among them was the anti-bacterial activity. Different extracts were prepared with the leaves, whole plant, stem, and root and then assayed with different types of bacteria to check the efficiency of the extracts. The bioactive compounds present in them proved that they had anti-bacterial properties. The whole plant extracts were the most active against the growth of the bacteria 11.

Jaundice: Used by rural and tribal people 12 the whole plant is consumed to treat jaundice.

Antiviral Activities: Studies conducted against Herpes Simplex Virus demonstrated strong antiviral activities through plaque reduction assays, and real-time polymerase chain reaction. It can also be used for the treatment of hepatitis B and HIV.

Ulcers: P. niruri has demonstrated anti-inflammatory and gastric anti-ulcer activity, particularly by the consumption of its leaves. It could reduce the size of the ulcers in rats 14.

Diabetes: In lowering the blood sugar levels and preventing the spikes in sugar level after intake of high carbohydrate-rich food. Antidiabetic property of methanolic extracts of the plant was found in a study conducted on rats. The blood sugar levels were significantly reduced when the extracts were supplied in dosage forms. They could also suppress the rise in the glucose levels after consuming a heavy glucose meal in normal rats. The rats also had lower hemoglobin levels (P<0.05) 15.

Antispasmodic Activity: Alkaloids extracted from plants of the genus Phyllanthus present an antispasmodic activity leading to smooth muscle relaxation, mostly evidenced in the urinary tract, which would facilitate the elimination of urinary calculi. These data strongly suggest that Phyllanthus niruri may be a potential source of many substances with antilithiasic properties 16.

Phytochemical: Rutin, a flavonol glycoside, strengthens capillaries and so can help people suffering from arteriosclerosis or high blood pressure 17. Geranin, a tannin, possessed the ability to lower systemic blood pressure by reducing noradrenaline release in spontaneously hypertensive rats 18. Alkaloids like Nirurine, phyllanthine, and phyllochrysine were also isolated from P. niruri 19, 20. A Saponin, Diosgenin is a steroid glycoside that exists widely in the plant kingdom, and plants containing this agent are extensively used in Traditional Chinese Medicine 21. Diosgenin demonstrated anti-fungal and cardiovascular activity 22.

Two new lignans were reported recently, namely cubebin dimethyl ether and urinatetralin, from the cell suspension cultures of P. niruri. This was the first report on cell suspension cultures of P. niruri successfully produced lignans 23. Urinatetralin was isolated from P. niruri 24. Flavonoids are used to prevent and cure diseases associated with free radicals. They are found to have a defensive effect against bacterial and viral infections and diseases such as cardiovascular ailments, malignancies, and other age-related disorder’s 25.

Limonene is a monoterpenoid that has many medical and pharmaceutical applications 26. The anti-carcinogenic actions of limonene in liver tumor models have been reported 27. Research in Japan and India in the 1980's has demonstrated the liver-healing properties of Phyllanthus niruri. The primary compounds responsible are phyllanthin, hypophyllanthin, and triacontanal. Glycosides found in Phyllanthus niruri demonstrated Aldose reductase (AR) inhibitory activity in studies conducted by a Japanese research group in 1988 and 1989 28.

Antioxidant Properties: P. niruri extracts can break the oxidation chain reaction and inhibit peroxides' formation. The free radical scavenging activity of the plant is due to the presence of various phytochemicals like coumarins, alkaloids, coumarins which are proven to have antioxidant activities 29. P. niruri can reduce oxidative stress in various organs like the kidney by preventing a decrease in the level of existing antioxidant enzymes. It is therefore beneficial in treating kidney diseases due to diabetes 30.

Liver Tissue Collection: Fresh Chicken (Gallus gallusdomesticus) liver tissue was bought. A sample of liver tissue was excised and transferred immediately to ice-cold saline and transported to the laboratory on the day of the experiment in an ice bath.

Preparation of CCl4 Solution: 9.74ml of CCl4 was mixed with 10.26ml of distilled water to prepare 20ml of 5M solution of CCl4. A definite volume from the stock solution was used in the reaction mixture to induce toxicity and to study its effect on liver tissue.

Experimental Design for Hepatoprotective Activity: Hepatoprotective activity of the plant extract was evaluated using the liver tissue obtained from the shop. The fresh liver was thinly sliced (500mg), washed with KRBH buffer, was transferred into different vials containing KRBH buffer and the following reaction mixtures:

All the above-mentioned cultures were incubated at room temperature for 60 minutes and then homogenized. The homogenate was then centrifuged at 4000 rpm for 15 min at 4 oC. The supernatants of the tissues post centrifugation were assayed for Serum Glutamate Pyruvate Transaminase (SGPT) and Lactate Dehydrogenase (LDH).

SGPT Assay: SGPT, also called ALT (Alanine Transaminase) on incubation with Phosphate buffered substrate (0.1M, pH 7.4) containing L-Alanine and α-Ketoglutarate forms pyruvate and glutamate. The pyruvate thus formed is coupled with DNPH reagent to give hydrazine, a brown-coloured complex whose absorbance was read at 540nm. The enzyme assay was carried out by adding 1ml of buffered substrate into different test tubes which was pre-incubated at 37oC for 15 minutes. 0.2 ml of respective supernatant was added to the respective tubes and incubated at 37oC for 15 min.

Then 1ml of DNPH reagent was added to arrest the enzyme activity. The tubes were allowed to stand at 37oC for 15 min. After cooling the tubes, 5ml of 0.4N NaOH was added. In the control tubes, the respective supernatants were added only after NaOH.

Similarly, the experiment was performed with standard Sodium pyruvate solution (200µg/ml) by pipetting 0.1ml to 0.5ml of the standard in different test tubes, and the final volume in each tube was made up to 1.2ml using Phosphate buffer. 1ml of DNPH reagent was added to the tubes and incubated at 37oC for 15 min, followed by 5ml of 0.4N NaOH after cooling. The absorbance was measured at 540nm 33.

LDH Assay: King’s method was used to determine the amount of enzyme released from the liver tissue into the medium due to toxicity induced by Carbon tetrachloride. LDH on incubation with Glycine buffered substrate (0.1M, pH10) containing Lithium lactate forms pyruvate, which reacts with DNPH reagent to give reddish complex in alkaline medium.

The absorbance was read at 540nm. 1.0ml of the buffered substrate, 0.2ml of NAD solution and 0.1ml of the respective supernatants were taken in respective tubes.

The reaction mixture was incubated at 37oC for 15 min. Activity in each of the tubes was arrested by adding 1ml of 2,4-DNPH reagent, and the tubes were again incubated at 37oC for 15 min. After incubation, the tubes were cooled and 7ml of 0.4N NaOH was added to all the tubes. A control having 1ml buffered substrate, 0.1ml of NAD solution, 1ml of DNPH reagent, and 7ml of 0.4N NaOH was used, after which 0.1ml of respective supernatants was added and absorbance was absorbed read. Similarly, the test was performed with standard sodium pyruvate solution (80µg/ml) by pipetting 0.05-0.25 ml of the standard in different test tubes, the final volume in each test tube was made up-to1.3ml using distilled water. 1ml of 2,4-DNPH reagent was added and incubated at 37oC for 15 minutes, followed by the addition of 7ml of 0.4 N NaOH. The absorbance was read at 540nm 33.

The different preparations of the P. niruri extracts were the aqueous and methanolic extracts of the dry powder and the fresh leaves. It was observed that chicken liver which had no addition of any plant extracts and had CCl4 toxicity induced, had the lowest SGPT activity. In contrast, the chicken liver with no toxicities induced had the highest SGPT activity. 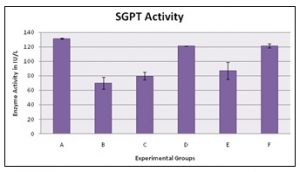 Lactate Dehydrogenase Assay: The LDH activity of chicken liver after CCl4 induced toxicity and treatment with various P. niruri extracts are depicted in Table 2 and Fig. 2.

The LDH activity was compared with that of the chicken liver treated only with the buffer, serving as blank and chicken liver suspended in buffer and induction of CCl4 toxicity, without adding plant extract, and serving as the control. The different preparations of the P. niruri extracts were the aqueous and methanolic extracts of the dry powder and the fresh leaves. 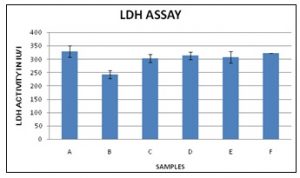