Categories Menu
Home » GENETIC VARIABILITY OF CYP2B6 G516T AND THEIR IMPACT IN EFAVIRENZ BASED HAART: A META-ANALYSIS

GENETIC VARIABILITY OF CYP2B6 G516T AND THEIR IMPACT IN EFAVIRENZ BASED HAART: A META-ANALYSIS

GENETIC VARIABILITY OF CYP2B6 G516T AND THEIR IMPACT IN EFAVIRENZ BASED HAART: A META-ANALYSIS

Background: The non-nucleoside reverse transcriptase inhibitor efavirenz is recommended as part of first-line therapy in HIV-infected patients and prescribed at a standard dose of 600 mg once daily. EFV is extensively metabolized primarily by hepatic CYP2B6 with partial involvement of CYP3A4 and CYP2A6. The aim of the study was to assess CYP 2B6 G516T polymorphism and their impact in efavirenz based therapy

Result: From fifty four articles only twenty two articles were included in the study based on the inclusion criteria. The average frequency of CYP 2B6 G516T polymorphism, from forest plot of 7 studies, was around 30% which strengthened the idea of substantial number of this polymorphism. Most of the studies had high proportion of mutant allele and the average of the all is around 49%. The mean plasma efavirenz concentration among 516GG, 516 GT and 516 TT holders was 2.869 ± 0.294 µg/ml, 3.464 ± 0.276 µg/ml and 9.659 ± 1.262 µg/ml, respectively and it has significant association with genetic polymorphism of CYP 2B6 G516T.

Conclusion: The most common type of CYP 2B6 polymorphism is CYP 2B6 G516T that have significant association with plasma efavirenz concentration. Having genetic test before drug starting is promising in HIV therapy to decrease side effects and to have better treatment outcome.

INTRODUCTION: HIV/AIDS is a pandemic disease that has high morbidity and mortality rate. According to 2008 HIV/AIDS report by WHO/UNAIDS, the number of people living with HIV/AIDS was 33 million [31.1 million–35.8 million] from which 31.3 million [29.2 million–33.7 million] were adults. There were 2.7 million people with new infection of HIV and 2.0 million [1.7 million–2.4 million] deaths due to HIV/ADIS in 2008. Sub-Saharan Africa remains the most heavily affected region, accounting for 71% of all new HIV infections in 2008 1.

But after the introduction of antiretroviral drugs the morbidity and mortality rate of HIV/AIDS decrease from time to time. There have been remarkable advances in the treatment of HIV/AIDS during the last 20 years. Today there are over 20 antiretroviral agents representing five therapeutic drug classes, each with a unique mechanism of action 2. Non nucleotide reverse transcriptases are the major component of combination therapy in which efavirenz and nevirapine are the widely and mainly used drugs of this group.

Even though there is a decrease in mortality and morbidity rate, there are still a challenge in treatment of HIV/AIDS patients with antiretroviral therapy which include resistance, adverse effect and variation of a given regimen to different individual 3.

The non-nucleoside reverse transcriptase inhibitor, efavirenz, is recommended as part of first-line therapy in HIV-infected patients and prescribed at a standard dose of 600 mg once daily 4. Efavirenz undergo phase I, functionalizing reaction, and phase II, conjugation reaction. EFV is extensively metabolized primarily by hepatic CYP2B6 with partial involvement of CYP3A4 and CYP2A6 to inactive hydroxylated metabolites that include 8-hydoxy and 7-hydroxyefavirenz 5, 6, 7. The 8-hydroxyefavirenz is the major metabolite of EFV in vitro and in vivo, and the contribution of 7-hydroxylation to the overall clearance of EFV is considered to be small 6.

Several studies have shown that CYP2B6 is highly polymorphic and that genetic variations play an important part in EFV plasma concentration variability and associated with central nervous system toxicity 11, 12]. However, so far there was no Meta analysis study that shows the impact of CYB 2B6 polymorphism in plasma concentration, CNS toxicity and relation this polymorphism with ethnicity.

Therefore, this study was important in comparing polymorphism of CYP2B6G516T, its impact in plasma concentration and clearance of efavirenz, and its relation with different ethnicity across different articles.

Literature Search: A computerized literature search was conducted using the Medline, PubMed, and Highwire. Keywords used to identify articles included “CYP 2B6”, “efavirenz”, “polymorphism”, and “HIV/AIDS” were used. Different styles of the search terms were also usedin order to obtain every relevant article.

Inclusion Criteria: Studies which involves individuals who were either HIV/AIDS patient that were under HAART or healthy individual who took efavirenz for short term to study polymorphism of CYP 2B6 and undergone genotyping study at least for CYP 2B6 enzyme were included in the study.   And in this review the articles were not filtered by age of the study participant.  All articles included in this study were those that published in between 2000 to 2010. So, fifty four articles were obtained but based on the inclusion criteria, only twenty two of which were included in analysis of some of the common variables.

Data Extraction: Data from each paper fulfilling inclusion criteria were reviewed and separately extracted. Coding of articles and common variables in analysis, such as CYP 2B6 G516T polymorphism, ethnicity, EFV plasma concentration, clearance, and CNS side effect, were done. 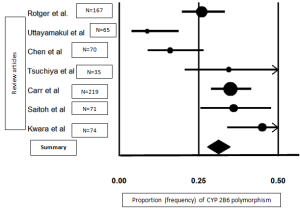 FIGURE 1: FOREST PLOT SHOWING THE FREQUENCY OF CYP2B6 G516T POLYMORPHISM IN DIFFERENT REVIEW AND ITS SUMMARY

* Pooled percentage of different allele of CYP 2B6 G516T 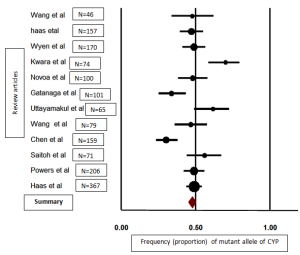 FIGURE 2: FOREST PLOT OF FREQUENCY OF MUTANT ALLELE OF CYP 2B6 G516T ENZYME

TABLE 3: FREQUENCY OF CYP 2B6 G516T POLYMORPHISM AMONG WHITE, BLACK AND HISPANIC ETHNICITY 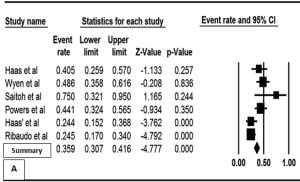 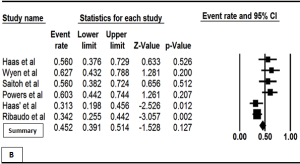 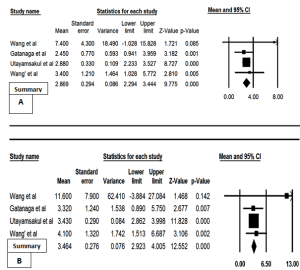 The polymorphism of CYP 2B6 enzyme not only has an effect on the plasma concentration of the drug but it also has an effect in other pharmacokinetics parameters including clearance of the drug (not included in analysis part) and even the untoward effect of the drug. Since metabolism is one way or pre requisite of clearance of a drug, decreasing in metabolic activity of CYP 2B6 (mainly in G516T polymorphism) could result in decreasing the clearance of efavirenz and this was supported by Haas et al study of decreased efavirenz clearance by 23% in 516 GT holder and 54% in 516TT holder compared to those who have 516 GG allele with P value less than 0.0001 16. Homozygous CYP 2B6*6 (G516T, A785G) poor metabolizer (mutant allele) had 21% lower mean apparent clearance than extensive efavirenz metabolizers (wild type) 20.

Even if this study failed to do analysis on relationship between CNS side effect and G516T polymorphism, this study believe that, decrease in clearance and hence increase in plasma concentration of efavirenz in variant allele holder individuals were related with adverse effect of efavirenz mainly CNS side effect which is supported by Haas et al that identified the presence of the variant allele was two to three times more frequent among individuals describing sleep or mood disorders or fatigue 13.

However, the CNS side effect resolve after 2 – 4 weeks which is evidenced by Haas study of CYP2B6 G516T genotype was associated with efavirenz adverse central nervous system symptoms at 1 week but not significantly at week 24.

The possible reason for these could be development of tolerance by different mechanism. Interestingly, neurons and astrocytes in human brain express CYP2B6 35, suggesting potential intracranial influences on efavirenz metabolism that may not be apparent by assaying peripheral plasma 16.  Even if in the majority of the individuals these side effect was not severe and are found to resolve with time, in some individuals there was discontinuation of therapy because of severe side effect of efavirenz 16. However the power et al study showed there is significant association between CYP 2B6 polymorphism and EFV based regimen discontinuation and the reason for drug discontinuation are likely to be multifactorial 29.

Even if variation in treatment outcome is due to  variation by age, sex, disease status, and quality of life,  ethnicity was found important variable in this study that have relation with polymorphism of CYP 2B6 36. Different studies indicate that there are variations in expression of CYP 2B6 enzyme among different ethnicities 3, 37, 14, 29. The study conducted by Klein et al, eight new nucleotide changes in the coding region were indentified, from these 76A>T (T26S), 83A>G (D28G), 85C>A and 86G>C (together resulting in R29T) were observed only in African- Americans, whereas g.15618C>T (T168I), g.18038G>A (D257N), g.21034C>T (R336C) and g.21498C>A (P428T) SNPs were found exclusively in Ghanaians. No novel amino acid changes were observed in Asian individuals 14.

In this study the frequency of mutant allele of G516T in white individuals was 35.9 % compared to blacks with 45.2% which also showed the presence of significant association between ethnicity and G516T polymorphism. The current study and different previous studies showed that mutant allele of G516T is most common in blacks than any other ethnicity.

Powers et al study showed that the 516TT homozygote frequency in the study population was found to be 16% in Blacks compared with 6% in Caucasians 29. Global data analysis revealed a generally lower extent of polymorphism of CYP2B6 in Asians, as already observed in other studies 24, 27. This is reflected in an overall higher frequency of the wild type CYP 2B6 (*1 allele) of 68.4% in all Asians; compared to 50.7% in Caucasians 29.

Plasma efavirenz concentration may vary among different ethnicity; the reason behind these might be difference in frequency of mutant allele among these ethnicities. The present study showed that since the frequency of CYP G516T mutant allele was more common in black (higher in frequency) than other ethnicity of white, Asian or Hispanic, blacks had higher plasma efavirenz concentration which is evidenced by Haas et al study, the CYP2B6 T/T genotype at position 516 (Gln172His) was more common in African-Americans (20%) than in European-Americans (3%), and was associated with greater efavirenz plasma exposure 16.

The main limitations while doing this study were: some of the variables like CNS side effect, virological and immunological response, which were important in this study didn’t include in most reviews, as a result this study failed to do the analysis in those variables. Having most study in a given race or lacking enough study across different race  limited the outcome analysis of association of ethnicity with CYP 2B6 polymorphism and generalization of effect of ethnicity on plasma efavirenz concentration. Articles which were difficult to access or not free limit the extent of articles on analysis and its outcome.

CONCLUSION AND RECOMMENDATIONS: CYP 2B6 G516T is most frequent polymorphism that significantly affect with efavirenz pharmacokinetics activities or profiles. Generally there is variation in expression of CYP 2B6 G516T polymorphism in various ethnicities while not forgetting that in black population mutant allele of G516T is most common. Plasma efavirenz concentration is significantly higher in 516TT holder than in 516GG holders. HIV/AIDS prevalence and infection rate is so high in African countries in addition to highly pronounced CYP 2B6 polymorphism in blacks which may show that there could be high CNS side effects. The common trend or measurement when the patient faced severe side effect, including CNS side effect is treatment switch which limit the treatment option. But it could be easy if a drug is given based on the individual enzymatic expression or if not, just undergo dose adjustment by taking plasma drug concentration of a drug. Lowering EFV dose reduce side effect without affecting efficacy of drug.

Since pharmacogenetic study, especially in HIV therapy, is new and only few studies were undergone, further studies which include large population size and broad variables mainly immunological, virological response, adherence, CNS side effect addressed variable should be conducted.