ABSTRACT: Gliflozin drugs is the sodium-glucose co-transporter 2 inhibitor is the newly developed class of oral hypoglycaemic agents used for the treatment of the type-II diabetes mellitus. This class approved by food and drug administration in 2013 for the treatment of diabetes, with a unique mechanism of action. SLGT-2 proteins are macromolecule reabsorb the filtered glucose molecule from (PCT) in the kidney. This class of drugs block SGLT-2 protein from the site of the proximal convoluted tubule (PCT) in the kidney, resulting in prevent reabsorption of a glucose molecule and allow excretion of glucose molecule through urine. By this mechanism, the gliflozins drug lowers the blood glucose level in the body.SGLT-2 inhibitors are the newest class of anti-diabetic drugs grab more attention when it is used in combination with insulin and other anti-diabetic drugs. Gliflozins shows various adverse effect such as ketoacidosis, urinary tract infection, bone fracture, and foot and leg amputation. This article explained pathogenesis and pathophysiology of type-II diabetes mellitus with a detailed mechanism of action of a gliflozin class of drugs. Also, latest gliflozin class drugs introduced and approved are discussed in this review.

INTRODUCTION: Type-II diabetes mellitus is the most common type of disease in which body glucose level increases higher than normal. Normally secret pancreas hormone called insulin. Insulin metabolizes glucose that we obtain from food that converts into energy. People with diabetes mellitus type II either pancreas does not produce enough insulin or pancreas can produce insulin but the liver, muscle and fat cells don’t use it. This is also called as insulin resistance. When a cell becomes insulin resistant, it requires more insulin to convert glucose into energy, and it leads to hyperglycemia, or raised blood sugar.

Pathogenesis and Pathophysiology of Type-II Diabetes Mellitus: Hyperglycaemia and physiological as well as behavioral responses are interlinked with each other. When blood glucose level increases than normal, it recognized by brain and it send message to the pancreas and other organ to decrease its effect through nerve impulses 6. 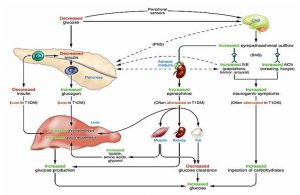 Physiology of SGLT Protein: 9 The SGLT (sodium-glucose transport) proteins are the macromolecules which cause reabsorption of the filtered glucose from the PCT part of the nephron, and most important part is that these proteins work independently of insulin. 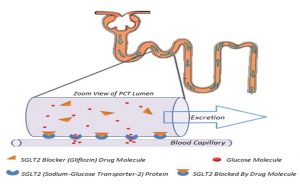 Probably the SGLT proteins occur in the nephron and the large intestine.  There are two main types of SGLT proteins known as SGLT 1 & SGLT 2. The SGLT1 proteins occur in PCT of nephron as well as in the large intestine. The SGLT 2 proteins occur only at PCT part of the nephron. SGLT 1 has a higher affinity but low concentration (with 2:1 sodium-glucose co-transport ratio) that’s why they bring about only the 10% of total glucose reabsorption, on the other hand, the SGLT 2 has higher concentration (with 1:1 sodium-glucose co-transport ratio) and shows the 90% of total glucose reabsorption.

Selective Inhibition of SGLT 2 transport proteins will reduce reabsorption rate of glucose molecule resulting in increasing the glucose excretion rate and reducing the blood glucose concentration to 40-120 mg/dL showing a beneficial effect for treating diabetes mellitus type-II. The functions (rather than glucose absorption) of SGLT1 in the large intestine is still unknown, but it is observed that the inhibition of SGLT1 produces the intestinal complications like diarrhea and disturbs the wellness of large intestine. 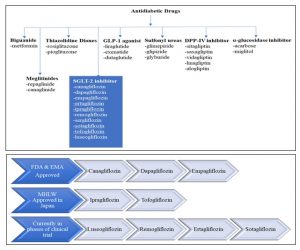 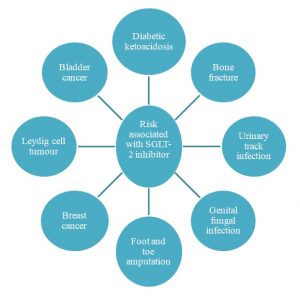 Canagliflozin: Canagliflozin hemihydrate is the first Gliflozin approved for use in the United States and Canada under the brand name "Invokana" by Janssen pharmaceuticals 12. It is significant sodium-glucose cotransporter 2 (SGLT2) inhibitors. When blood circulates through the kidneys, the kidneys filter out glucose from the blood, and the SGLT proteins then reabsorb glucose back into the blood.

Dapagliflozin: It was approved for use in the United States under the brand name "Farxiga" by the Food and Drug Administration in 2014. 14 It is a competitive inhibitor of sodium-glucose cotransporter 2 protein. Dapagliflozin helps to lower the blood glucose level by preventing glucose reabsorption in the kidney. Farxiga tablet reduces blood glucose level by improving the kidney to remove excess glucose out of the body through urine. Dapagliflozin is indicated for the treatment of type II diabetes mellitus in combination with diet and exercise. Dapagliflozin is BCS Class III drug having water solubility 0.173 mg/ml. Dapagliflozin blocks glucose reabsorption into the kidney, resulting in the elimination of blood glucose through the urine 15. It is recommended as 5 mg or 10 mg once in a day, by orally. Use of Dapagliflozin leads to glycosuria (glucose excretion in urine), which may cause dehydration. Urinary tract infection, thrush, lowering of blood pressure are another side effect of Dapagliflozin.

Empagliflozin: Approved in the United States under the brand name "Jardiance" was developed by Boehringer Ingelheim and Eli Lilly and Company 16, 17. Empagliflozin is a white to yellowish non-hygroscopic crystalline solid, very slightly soluble in water (pH 1-7.4), slightly soluble in acetonitrile and ethanol, sparingly soluble in methanol, and practically insoluble in toluene Empagliflozin having water solubility 0.111mg/ml. Empagliflozin is very slightly soluble in aqueous media between pH 1-7.5 but has low intestinal permeability; it belongs to BCS class III. It can be given orally; dose recommended is 10mg/25mg available in the form of tablets. Empagliflozin is a novel, potent, and orally active sodium-glucose cotransporter 2 protein inhibitor and indicated for type II diabetes mellitus. It lowers the renal threshold for glucose and increases glucose excretion through urine. In Addition to this, it contributes to reduced hyperglycemia, assists in weight loss, and reduces blood pressure 18.

Ertugliflozin: Ertugliflozin is a potent and selective inhibitor of sodium-dependent glucose co-transporter type II; it is responsible for 90% reabsorption of glucose from the glomerulus. It is indicated along with diet and exercise for the treatment of diabetes mellitus type II. In Europe, it was approved in March 2018 for use as a monotherapy or combination therapy 19. This drug was approved in the United States under the brand name "Steglatro" on December 19, 2017. 20 Ertugliflozin is very slightly soluble in water. In combination with metformin is marketed as Segluromet. And in combination with sitagliptin phosphate, it is marketed as Steglujan. It is available in the form of a film-coated tablet. The dose of ertugliflozin in combination therapy is 2.5 mg or 5 mg. Ertugliflozin is contraindicated for patients with severe kidney failure and dialysis 21.

Ipragliflozin: Ipragliflozin was developed by the Japanese company Astellas Pharma Inc. under the brand name "Suglat"; approved in Japan on January 17, 2014. 22, 23 Ipragliflozin is a novel, orally active, potent, selective next-generation sodium-glucose co-transporters type II inhibitor under clinical trials treatment of patients with diabetes mellitus type II 24. Ipragliflozin approved as 25 mg and 50 mg tablets, to be administered as a 50 mg dose once daily either before or after breakfast.  Ipragliflozin produces dose-dependent increases in urinary glucose excretion and reduces blood glucose level significantly. It is approved for use as monotherapy or in combination with other anti-hyperglycemic agents 25. Ipragliflozin having very poor water solubility, i.e. 0.0299 mg/ml.

Sergliflozin Etabonate: It is the active form of sergliflozin and an anti-diabetic drug developed by Glaxo SmithKline. It is a potent and selective SGLT II inhibitor. Sergliflozin etabonate was discontinued after phase II trials due to various unfavorable effects like non-desired pharmaceutical properties and no selectivity 30.

Sotagliflozin: It is a dual SGLT1/SGLT2 inhibitor, in phase III trials, under the brand name ‘Zynquista’ development by Sanofi and Lexicon Pharmaceuticals. Sotagliflozin is an orally bioavailable inhibitor of the sodium-glucose co-transporter I and II, with potential anti-hyperglycemic activity. If this drug approved, Zynquista would be the first oral antidiabetic drug approved in the U.S. for use by adults with type 1 diabetes, in combination with insulin. Upon oral administration, sotagliflozin blocks SGLT I at the gastrointestinal tract and SGLT II at kidney Thereby it suppresses the absorption of glucose at GI tract and reabsorption of glucose at the kidney. It decreases the uptake of glucose and increases the excretion of glucose and normalize blood glucose level. sotagliflozin is crystalline solid; it is sparingly soluble in organic solvents and very slightly soluble in aqueous buffers. Sotagliflozin has low water solubility 0.042 mg/ml.

Tofogliflozin: It is the drug for the treatment of diabetes mellitus and approved in Japan under the brand names "Apleway" and "Deberza" by Sanofi and Kowa Pharmaceutical. Tofogliflozin was developed by Chugai Pharma in collaboration with Kowa and Sanofi. Tofogliflozin is an orally active small molecule and sodium-glucose co-transporter type 2 inhibitor; it is responsible for at least 90% of glucose reabsorption in the kidney 32.

Luseogliflozin: Luseogliflozin is orally active second-generation sodium-glucose cotransporter 2 inhibitor, developed by Taisho Pharmaceutical, indicated for type 2 diabetes mellitus. It can be used as monotherapy or combination therapy along with other anti-hyperglycemic drugs 34.

It significantly increases the excretion of glucose in urine. Use of Luseogliflozin reduces the bodyweight significantly. Taisho Pharmaceutical manufactured Luseogliflozin under brand name Lusefi® Tablets 2.5 mg and Lusefi® Tablets 5 mg. Ordinarily; the dosage for adults is 2.5 mg, taken orally once a day before or after breakfast. If the effect is insufficient, the dosage may be increased up to 5 mg, taken once a day, with close follow-up observation 35.

CONCLUSION: The review is systemic data about the SGLT-2 inhibitors a gliflozins class of drug. In the type-II diabetes mellitus, the blood glucose level is increased higher than normal. β-cell of the pancreas are responsible for the secretion of insulin, but in type-II diabetes mellitus, there is impaired secretion of insulin in the blood; therefore, the glucose level in blood increases.

SGLT-2 inhibitors are a newly developed class of gliflozin molecules which block the SGLT-2 protein on PCT and prevent reabsorption of glucose. Gliflozins act more readily when used in combinations with other types of anti-diabetic drugs.

ACKNOWLEDGEMENT: The author would like to express her thanks to Dr. S.J. Wadher Professor, School of Pharmacy, Swami Ramanand Teerth Marathwada University, Vishnupuri, Nanded (M.S.).