From the dawn of civilization, medicinal plants are known to be part of human society to combat diseases. In recent times, focus on plant research has increased all over the world and various evidences have been collected to show immense potential of medicinal plants used in various traditional systems. India officially recognizes over 3000 plants for their medicinal value. It is generally estimated that over 6000 plants in India are in use in traditional, folk and herbal medicine. This paper aims to provide a comprehensive review on the phytochemical and pharmacological aspects of Curculigo orchioides, Amaryllidaceae also known as “Golden eye grass”. It possesses a vast ethnomedical history and represents a phytochemical reservoir of heuristic medicinal value. It is one of the oldest oriental medicines mentioned in Ayurveda as potential remedy for various ailments. The rhizome is rich in Curculigoside, other glycosides, steroids, flavonoids and also contains various polyphenolic compounds. Many pharmacological studies have demonstrated the ability of the rhizome shows antioxidant, anti inflammatory, spermatogenic, aphrodisiac, immunostimulant, hepatoprotective, antiasthamatic, supporting its traditional uses. In this review article, we have focused our interest on phytochemistry, traditional uses, tissue culture study and its reported pharmacological properties.

INTRODUCTION:Medicinal plants are wealth of mankind. India with its mega-biodiversity and knowledge of rich ancient traditional system of medicine (Ayuveda, Sidhdha, Unani, local health traditional) provide a strong base for utilization of a large number of plants in alleviation of common ailments of the people 1. With the emerging worldwide interest in adopting and studying traditional systems and exploiting their potential based on different health care systems, evaluation of the rich heritage of traditional medicine is essential.

In this regard, we have choosen Golden eye grass (Curculigo orchioides) for establishing its medicinal richness. Curculigo orchioides is a key member of thedasapushpa and a highly useful plant in theindigenous system of medicine. It is small, geophilous herb used as a rejuvenating andaphrodisiac drug. 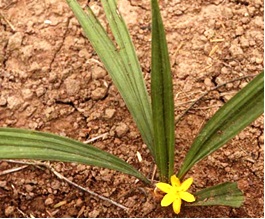 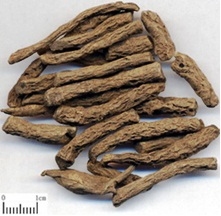 Morphology: It is a perennial herb about 30 cm in height with a short or elongated root stock bearing several fleshy and lateral root which are blackish brown externally and cream internally.

Microscopic Characters: Curculigo shows a narrow strip of cork, consisting of 5 to 7 rows of light brown cubical to rectangular cells; secondary cortex consists of thin-walled, parenchymatous cells, densely filled with starch grains and acicular crystals of calcium oxalate, either isolated or in bundles, in a few cells; a few small, round to tangentially elongated, lysigenous cavities also found scattered in this region; a few vascular bundles found embedded in cortical region with phloem towards outer side, and consisting of a few xylem elements; ground tissue consists of parenchymatous cells, some of which contain acicular crystals of calcium oxalate; numerous fibro-vascular bundles found scattered throughout the region, mostly towards peripheral region having phloem, almost encircled by xylem vessels having annular and spiral thickenings; starch grains simple, rounded to oval and also compound of 2 to 4 components, measuring 4 to 21 μ in dia., present in cortical and central region, a number of deep red, resin canals found throughout the region, mucilage in the form of colorless mass found in a few cortical parenchymatous cells 2.

Powder Microscopy: It is Grayish; vessels with annular and spiral thickenings; simple, round to oval, starch grains measuring 4 to 21 μ in dia., and compound starch grains having 2 to 4 components and a few acicular crystals of calcium oxalate; mucilage in the form of colorless mass found in a few cortical parenchymatous cells. The quantity and kind of starch grains, the type of bundles of calcium oxalate crystals and of mucilage cavities in the periphery of the rootstock are very characteristic 2. 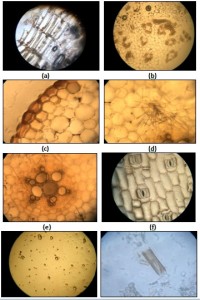 Distribution: It is believed to have originated in the shady forests of Asia. The plant is distributed in plains and shows prostrate growth on moist fertile soil. It is found in all parts of India from near sea level to 2300m altitude, especially in rock crevices and laterite soil. It has been recorded to occur in the subtropical Himalayas from Kumaon eastwards ascending to 1800m, the Khasia hills, Bengal, Assam, Konkan, Kanara, the western peninsula and Tamil Nadu extending south as far as Cape Comerin. It is also distributed in Sri Lanka, Japan, Malaysia and Australia.

The demand of the raw materials and derivatives of the plant for the indigenous drug industries is satisfied mainly from the wild source, depleting the natural population. In the CAMP (Conservation Assessment Management Planning) workshop at IIFM (June 1999) Curculigo orchioides was included in the IUCN(The International Union for Conservation of Nature and Natural Resources) category of “LOWER RISK near threatened” 7.

Propagation Material: Tuber segments of 1.5-2 cm size, containing the apical bud, are collected during February-March and used for propagation.

Planting in the field:

Traditional Uses: Curculigo orchioides has been used in the indigenous system of medicine for long periods.  It has been prescribed in various combinations and dozes by tribals and traditional vaidyas for a number of ailments and disorders.

In another study the effects of hydroalcoholic extract (HE) of Curculigo orchioides Gaertn. Rhizome and its alkaloidal and non-alkaloidal fractions (AF) and (NAF) were evaluated in carrageenan-induced paw edema experimental models of inflammation with indomethacin as a standard drug. The percentage of inhibition of inflammation of all extracts was dose dependent. The crude HE showed 22.45%, 35.62% and 39.03% inhibition; AF showed 31.68%, 36.89% and 41.17% inhibition; and NAF showed 28.34%, 34.49% and 37.43% inhibition of induced hind paw edema in rats at doses of 100 mg/kg, 300 mg/kg and 500 mg/kg, respectively, while indomethacin inhibited 48.66% of the edema 44.

Two new triterpenoid sapogenins named curculigenins B and C, which are formulated as (24S)-3β, 11α, 16β, 24-tetrahydroxycycloartane and 3β,11α,16β-trihydroxycycloartane-24(25)-en, respectively by 1H, 2C NMR, 2D NMR analysis and chemical evidence, and one new phenyl glycoside and two new chlorophenyl glycosides were isolated. The structure of curculigoside B, curculigines B and C was elucidated to be 2-β-D-glucopyranosyloxy-5-hydroxybenzyl-2′-methoxy-6′-hydroxybenzoate, 24-dichloro-3-methyl-5-methoxy-phenol-O-β-D-apiofuranosyl (1-6)-β-D-glucopyanoside and 2,4,6-trichloro-3-methyl-5-methoxyphenol-O-β-D-xylopyranosyl(1-6)-β-D-glucopyranoside respectively 61-64.

Tissue Culture Study: This plant species have now become endangered due to reduction in the natural habitat that supports vegetation. Among the contributory factors, the following are the major ones:

a)      Extensive denudation of the forest floor, caused by cattle grazing and collection of   leaf litter;

b)      Removal from the wilderness for tuberous roots which are highly priced in the market for its metabolic-enhancing principles and aphrodisiac formulations;

Fruiting frequency was high under conditions of a partially open canopy and a thin litter layer. Seeds showed physiological dormancy and germinated 10 - 12 months after dispersal in natural habitats. Clonal propagation from leaves was induced by mild mechanical damage, high soil moisture, and humidity.

Low regenerative potential through sexual reproduction and high vulnerability to habitat disturbance appear to be the major constraints to maintaining natural populations of Curculigo orchioides 84.