ABSTRACT: In this paper, an attempt was made to develop a Group-Quantitative Structure Activity Relationship (GQSAR) model on a series of substituted Quinoline derivatives as anti-Tubercular agents. The dataset was fragmented based on substitution points on the quinolone ring. Various 2D descriptors were calculated and used in the present analysis. For model validation, the dataset was divided into various training and test sets using sphere exclusion method. The developed G-QSAR models were found to be statistically significant with respect to training (r2>0.7), cross-validation (q2>0.6), and external validation (pred_r2>0.5). The developed GQSAR model suggests that substitutions on fragment R4 have an important role in determining biological activity.

INTRODUCTION:Each year more lives are lost due to Mycobacterium tuberculosis causing the deadly disease tuberculosis affecting the lungs (pulmonary TB) and other sites as well (extrapulmonary TB). There are millions of new cases of tuberculosis being diagnosed with 1.45 million deaths occurring mainly in developing countries 1. With the available treatment such as direct observed treatment short-course (DOTS) making a major progress in TB care and control, the tubercle bacillus is able to survive and continues to claim more lives 1-2.

The extensive appearance of drug resistant strains with the deadly synergy of human immunodeficiency virus (HIV) has increased the incidence of tuberculosis in both developing and industrialized countries 3. TB and HIV infections complement each other and approximately 0.35 million adults are infected with both pathogens 1.

The enigma of its dormancy and capability of infection in the latent phase are the prime reasons for which most of the treatments have failed against it as a result of which one third of the world population is infected 4.

The emergence of drug resistance due to the extensive period of treatment in which patients fail to complete the therapy and the unique property of mycobacterium to become persistent or dormant over very long periods indicate an urgent need to develop new anti-tuberculosis drugs 5-6.

Quinolines exhibit potent in vitro and in vivo anti-tubercular activity by both bacterial type II topoisomerase, DNA gyrase and topoisomerase IV, which are essential enzymes in catalyzing DNA supercoiling and decatenation reactions 7.

The present study is aimed to understand the structure activity of a few quinolines and obtaining a predictive quantitative structure activity relationship (QSAR) models. Among the present quinolines used as drugs for TB, Diarylquinoline R207910 (called as DARQ), targeted to the protonpump of bacterial ATP synthase has inhibited mycobacterial growth very effectively 8. With the aim of developing new anti-TB drugs, quinoline class of compounds has shown promising drug potentiality by inhibiting both replicating and non-replicating mycobacteria 9. This study would help in optimizing the structural-chemistry of various quinoline derivatives so as to enhance their anti-TB activity for the development as drugs later on. A stochastic search method such as an artificial neural network, k-Nearest Neighbor-Molecular Field Analysis (kNN-MFA), multiple regressions (MR) and partial least square regression (PLSR) was developed to provide an insight to the various interactive fields of different compounds in concordance with the in vitro experimental data.

QSAR approaches have been developed through the years and a more recent QSAR method Group-Based QSAR (G-QSAR) proposed to use descriptors by evaluating for the fragments of the molecules generated using specific fragmentation rules defined for a given dataset 10 is used to generate models that could provide a valuable reference in the design of pharmaceuticals with improved anti-tubercular activity.

MATERIALS AND METHODS: The current study of GQSAR study was performed using V-Life MDS version 4.1. GQSAR method utilizes fragment based descriptors of molecules, for the current dataset a common pattern based on substitutions was identified and the molecules were fragmented as shown in (Fig. 1a). 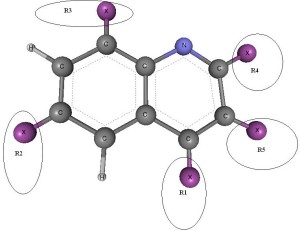 FIG. 1A: COMMON TEMPLATE FOR FRAGMENTATION OF THE COMPOUNDS

Dataset for G-QSAR study: SubstitutedQuinolines with known anti-tuberculosis activity were considered for the GQSAR study, activity of the compounds was taken from reported work given as (Minimum Inhibitory Concentration) MIC values11-14. The biological activity (MIC) of the molecules were converted to their corresponding pMIC (-logMIC) values and used as dependent variables in the QSAR calculations (Table 1).

TABLE 1: STRUCTURE, IUPAC NAME AND BIOLOGICAL ACTIVITIES OF THE MOLECULES FOR GQSAR

Energy Minimization: The molecules drawn using 2D draw of Vlife MDS 4.1 and the 2D structures were converted to 3D format. The Molecules were then optimized to their lowest energy state using merck molecular force field (MMFF) method 15 until the RMS gradient reached 0.01 kcal/mol.

Fragmentation of molecules: In quest toidentify the contributions of various groups on the quinolines ring towards the anti-tubercular activity the molecules were fragmented. The fragmentation was done using a common template (the common structure found in all the compounds) and breaking the bonds of dummy atoms attachment to the templates shown in fig. 1a. This fragmentation pattern generated five fragments for each compound as shown in fig. 1b. 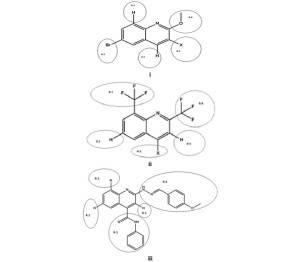 Calculation of fragment based 2D descriptors: Descriptors for QSAR model generation were then calculated for each fragment of a given molecule, which include 2D and 3D descriptors falling under the class of Physico-Chemical and Alignment Independent descriptors. Invariable columns (those columns that had the same numerical value throughout and thus invariable) not contributing to the QSAR were removed.

G-QSAR model building: A pool of descriptors were selected for building a quantitative model, and after removing the invariability a total of 565 descriptors encompassing all the fragments of the molecules was finally retained to build the QSAR model. Variable selection methods coupled with a various model building method such as k-nearest-neighbor (kNN), partial least square regression (PLSR) and multiple regression (MR) were selected form GQSAR model building. Cross-correlation limit as 0.5 with the term selection criteria as r2 for MR, PLSR and q2 for kNN-MFA and F-test ‘in’ value 4.0 and F-test ‘out’ value 3.0 were used as additional parameters for Stepwise variable selection method. The number of nearest neighbors in kNN was within the range of 2-5 and the distance-based weighted average as a method for prediction of biological activity was selected for the study.

Simulated annealing was used as variable selection method for PLSR (SA-PLSR) method with variance cut-off of 0. 5 and cross correlation of 0.7 with maximum and minimum temperature of 100 and 0.01, respectively.

RESULTS AND DISCUSSION: Substituted quinolines reported to show anti-TB activity (pMIC) in terms of micro molar concentrations were taken for GQSAR study. Fragmentation in GQSAR is done to obtain site specific clues for designing of new molecules. The congeneric series of molecules was fragmented based on a common template (Fig. 1a) resulting in five fragments.

Fragment based 2D descriptors like Physicochemical, Chi, Chiv, Kappa, estate counts, Estate indices and topological alignment independent descriptors were calculate for all five fragments. The data was classified in training and test set using sphere exclusion method, training set comprised of 30 compounds while the test set of 5 compounds. The uni-column statistics study showed that the maximum of the test was less than the maximum of training and minimum of test was greater than the minimum of training set (Table 2) which also indicated that the test set was interpolative/ subset of the training set.

The same data when subjected to kNN method resulted in a statistically significant model with q2 around 0.6996 and good external predictivity of the test set with pred_r2 = 0.5347. A model using random method of variable selection, simulated anneling, coupled with PLSR to improve results was statistically significant in terms of activity-descriptors relationship accuracy of 83.63% (0.8363) and a internal predictivity of 48.56% (q2= 0.4856). The external predictive ability of 51.54% (pred_r2= 0.5154) (Table 3).

The experimental and predicted activity of the compounds of training and test set are reported in Table 4. The nearness in experimental and predicted activity of the model was shown as the plots for SA-PLSR (Fig. 2 and 3). The robustness of the models was also evaluated based on the F-value and the standard error values. The F-value of SA-PLSR model was 31.92 indicating the model is significant. The SA-PLS model generated had 4 optimum components, and 10 descriptors. The contribution plot of all descriptors is shown in fig. 4. The contribution plot shows that the contribution of fragment R4 is maximum (~80 %) followed by fragment R2 (~14%) and R5 (~6%), indicating modifying substitution at R4 can improve biological activity significantly. 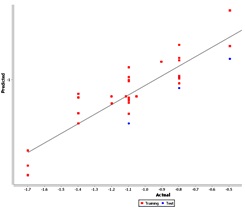 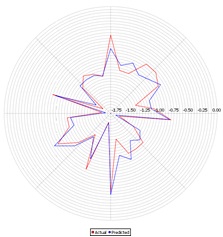 Descriptors like ChiV3Cluster (~8 %), T_2_F_2 (~ 5%) and SaaSE-Index (~ 15%) at fragment R4 are positively contributing, while T_N_O_5 (~ 6%), T_C_N_5 (~ 25%) and T_N_O_4 (~ 22%) are negatively contribution towards activity. The contributions suggest decreasing the distance between Nitrogen atom and Oxygen atom below 4 bonds while increasing the aromatic fluorine and sulfur atoms can increase biological activity.

TABLE 4: EXPERIMENTAL AND PREDICTED ACTIVITY OF THE COMPOUNDS 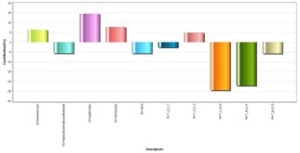 FIG. 4: CONTRIBUTION OF VARIOUS DESCRIPTORS IN THE SA-PLSR MODEL.

Detailed analysis of all the generated GQSAR models indicate that fragment R4 is a major contributor towards anti-tubercular activity. In fragment R4, nitrogen atom and its connectivity towards other atoms is decisive feature, also it has been seen that presence of aromatic ring at fragment R4 is important.

ACKNOWLEDGEMENT: The authors are thankful to the Department of Biotechnology (DBT), Government of India for providing the necessary fund and facilities needed for this work.