ABSTRACT: Green analytical chemistry is an attempt to reduce the environmental hazards caused by chemicals and chemical processes. To avoid the use or formation of dangerous materials, the best way is to prevent pollution rather than cleaning up the process. Therefore, it is important to choose a method with the least harmful effects on the environment.  The main focus or aim of green chromatography is to make a method greener at each and every step of analysis from sample collection to its determination. The present review includes the goals to achieve green chromatography using environmentally benign solvents and reagents, most recent contribution in the development of greener sample preparation since it has effect on whole analytical methodology, chromatographic separation techniques, advantages of green chromatography, green microextraction techniques (solid-phase microextraction, still bar sorptive, liquid-phase microextraction) are included. The aim is to make chromatographic separations greener, depending on the type of chromatography which includes the solventless extraction technique.

INTRODUCTION: Green chemistry is the use of various analytical techniques and methods which eliminate or decrease the generation of feedstocks, products, by-products, solvents, reagents, etc. that are hazardous to human health and environment. Or in short, we can say that it is the use of chemistry for prevention or control of pollution 1. Different synonyms like sustainable chemistry, clean chemistry, benign by design chemistry, and environmentally benign synthesis are also used for Green chemistry. In 1991, the term green chemistry was founded by Anastas and then the concept was further developed by Badami, Nemeroff, and Kletz 2.

Green science is huge ideas that have the degree for economic advancement generally utilized for the improvement of the analytical method with less ecological effect and minimum analyst occupational exposure. Various advances comprise the development of microextraction, ultrasound-assisted extraction (UAE) and microwave-assisted extraction (MAE) techniques. Techniques used for separation in research like HPLC or GC should be improved so that one could focus to eliminate the use of harmful solvent and decreases the time for detection.

The word green analytical chemistry (GAC) is defined as clean, environment-friendly chemistry. Green analytical chemistry comprises the analysis or detection of an organic compound with the use of quality assurance/quality control (QA/QC) and further reducing harmful environmental impacts resulting from the analysis. Green chromatography comes to mind first whenever we think of chromatographic procedures meeting the standards of green analytical chemistry principles. The chromatographic procedures for any analyte start from sample collection to its preparation and then the separation, finally quantification of the analyte. Similarly, green chromatography also relates to all the stages of analysis. But it focuses more at some steps with environmental impact like preparation of sample and chromatographic separation and therefore have a lot of potential for "Greening" 3 therefore we can say that green chemistry is the utilization of sets of different principle dealing with decreasing the environmental impact by reducing use of generation of risky substances in the design, production, and application of chemical products. 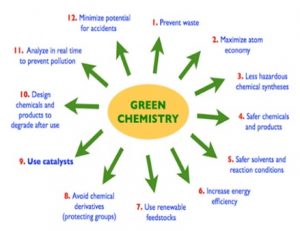 Explanation of each principle;

In 2001, Namiesnik suggested that the twelve principles of the green chemistry might be utilized to formulate the “green” character of green analytical chemistry and identified four top priorities as follows: 4-5 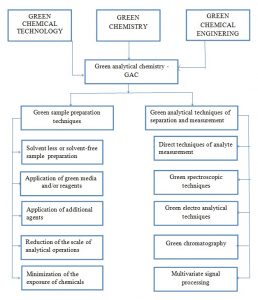 The method proposed by Grob Grob, work on direct gas chromatographic methods focused on on-column injection development. Detection of halogenated compounds in water samples by direct aqueous injection can be achieved by combing of on-column injection with electron capture detection. Similarly, the detection of hydrocarbons in water samples can be done using combined techniques i.e. direct aqueous injection with flame ionization detection or mass spectrometric detection 3. The goals of green analytical chemistry are achieved by the application of direct chromatographic methods in several ways. The utilization of materials used during the preparation of samples (including organic solvents, fibers, sorbents, cartridges etc.) is avoided. The overall time for the analysis greatly shortened. The elimination of the sample preparation step allows placing the chromatograph on-line, which may further reduce the analysis time.

Techniques Used for Sample Preparation: The sample preparation step is of fundamental importance for the accuracy and reliability of the final analysis results. In the context of the requirements of green chemistry less time and labor-consuming techniques, especially solvent-less sample preparation techniques, are gaining particular importance. This group of sample pretreatment techniques includes extraction techniques using a carrier gas, solid sorbents combined with thermal desorption of retained analytes and techniques using safe, non-toxic extraction media and green solvents. A brief overview is described in Table 1.

Green Chromatography Aspects: Gas chromato-graphy (GC) is a choice of technique for the analysis of volatile and semi-volatile compounds. Green chemistry principles can be implemented into gas chromatography in number of ways 11; 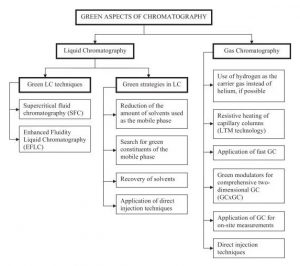 FIG. 3: GIVES AN OVERVIEW ABOUT VARIOUS ASPECT OF GREEN CHROMATOGRAPHY

A. Low Thermal Mass Technology: Temperature programming is considered as the second most important parameter to control after column selectivity, in Gas Chromatography. Increasing column temperature during Gas Chromatography analysis is referred to as temperature-programmed gas chromatography (TPGC). The advantages of TPGC is that it gives better separation for solutes with a wide boiling points range, improved peak symmetry for solutes with high retention factors, and improved detection limits 11. It allows the removal of unwanted heavier sample components from the column that could otherwise compromise the integrity of the chromatographic system. In 2001, Low Thermal Mass technology was introduced to achieve ultrafast temperature programming and an unprecedented cooldown time with a power consumption of approximately 1% of conventional gas chromatography 11. Fig. 4 and 5 present low thermal mass column module diagram. LTMGC is considered a green technique because resistive heating of a GC column brings about two main advantages: reduction of power consumption by approximately a factor of 200, and increased speed of column heating (up to 1800 °C/min; achievable rates depend on column mass, configuration and column void times), which can potentially reduce the analysis time. 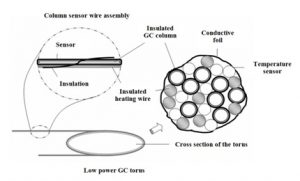 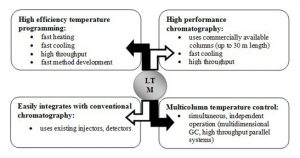 B. Comprehensive Two-Dimensional Gas Chromatography (GC×GC): These techniques were introduced in 1991 and known for around 25 years. It is the most powerful separation technique specifically for volatile and semi-volatile analytes when it is combined with time-of-flight mass spectrometry (TOFMS). 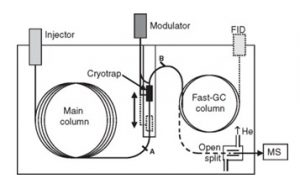 Green Liquid Chromatography: Liquid chromatography is considered less green as compared to gas chromatography, as it requires solvents for the separation which may be a source for pollution. On the flip side, this offers more possibilities for “greening”. To achieve environmentally friendly methods, some green HPLC techniques are also used. Nowadays in chemical laboratories all over the world, HPLC and related chromatographic methods are the most widely used analytical techniques. Each working HPLC instrument produces about 1.5–2 L of waste daily which leads to huge consumption of solvent and generation of waste, as in most of the case where HPLC method stationary phase column of 4.6 mm internal diameter and 25 cm length with a mobile-phase flow rate of about 1-–1.5 mL min is used 2. Based on the 12 principles of green chemistry, three principles where evolved which were applied under the umbrella of the green principle of green chromatography which called three Rs rules (reduce, replace, and recycle). The main focus was kept on the reduction or either replacement of the existing solvents with the greener one 27-28.

Solvent Reduction: There are many techniques to reduce the amount of solvent used, which also leads to a decrease in a waste generation; these techniques involve the following:

This results in a decrease in the total amount of waste produced, decreasing viscosity leads to decrease backpressure and high flow rate and faster separations. Overall improves peak symmetry with better efficiency 31. Fig. 7 shows the effect of the temperature. 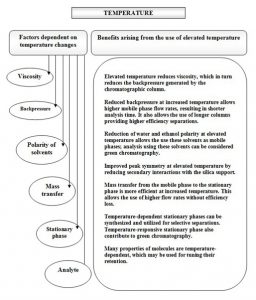 Solvent Replacement: In this technique, the toxic and flammable solvents are replaced by greener alternatives. The techniques involved in solvent replacement are as follows:

But there are some of the limitations like a need of high temperature which leads in the degradation of thermally liable compounds, insolubility of lipophilic compounds in water therefore so more temperature-resistant packing materials are required such as polymeric phases 32-33.

Ionic liquid: Ionic liquid is a salt in the liquid state. Ionic liquids are formed when salt melts without decomposing or vaporizing. Different ionic liquids are mostly based on quaternary nitrogen cations. Therefore, it is considered a green solvent alternative. The main advantages of ionic solvents are; they have no measurable vapor pressure; thermally robust; generate almost no waste product; excellent solvents for organic, inorganic, and polymeric materials; easy to buy, simple to prepare; a non-flammable.

CONCLUSION: From this review, we can conclude that the amount of waste generated per data point for analytical separation technologies can be decreased dramatically by a number of green analytical chemistry technology alternatives. As these newer, greener analytical separation technologies become more widely utilized, they are having a dramatic, beneficial impact in the workplace, allowing more work to be performed with fewer instruments and greatly reducing the amount of waste solvent associated with the collection of highly-valued analytical HPLC data.

CONFLICTS OF INTEREST: The authors confirm that this article content has no conflict of interest.