Objective: The aim of the present study is to investigate the synthesis and characterization of Silver nanoparticles (AgNPs), and their antimicrobial effect on gram positive and gram negative bacteria by using hydro alcoholic leaf extract of Ipomoea Aquatica Forsk (HAEIA).

Material and Methods: AgNPs were prepared by green synthesis process from 1mM AgNO3 solution the aqueous silver ions when exposed to the HAEIA were reduced and stabilized over long periods of time resulting in the green synthesis of surface functionalized silver nanoparticles. The bio-reduced silver nanoparticles were appropriately characterized by using UV-Vis spectroscopy, Particle size distribution and Zeta potential. Antibacterial activity of synthesized silver nanoparticles (AgNPs) was carried out on both Gram negative and Gram positive bacteria and compared with standard antibiotic Ciprofloxacin.

Result: The particle size of bio synthesized silver nanoparticles is found to be in the range of 77 - 624 nm with polydispersity index (PDI) of 0.207 clearly indicates that the particles are in very narrow size distribution. The zeta potential value of -6.16 mV that the nanoparticles prepared is stable.

INTRODUCTION: Nanotechnology provides the tools and technology platform for the investigation and transformation of biological systems, and biology offers inspiration models and bio-assembled components to nanotechnology.

Nanobiotechnology is defined as a field that applies the nanoscale principle and techniques to understand and transform bio systems (living and non-living) and which uses biological principles and materials to create new devices and systems integrated from the nanoscale 1.

Silver nanoparticles find wide application in various fields like catalysis, photonics, optoelectronics, information storage, antibacterial applications, etc. Silver powders, having ultra-fine and uniformly distributed particle size, are of considerable use in the electronics industry as thick film conductors in integrated circuits due to their unique properties such as high electrical and thermal conductivity, high resistance to oxidation 2.

Apart from electronic applications, it has been known for centuries that silver has bactericidal properties. Silver is a safe and effective bactericidal metal because it is non-toxic to animal cells and highly toxic to bacteria such as Escherchia coli (E. coli) and Staphylococcus aureas 3.

Silver based compounds have been used in recent years to prevent bacterial growth in applications such as burn care 4. Silver doped polymer fabrics, catheters and polyurethane are well known for their antibacterial functionality 5. Some common approaches such as physical processes of atomization or milling, chemical methods of chemical reduction, biological irradiation, water-in-oil microemulsions, and green synthesis methods have been utilized.

Synthesized the silver nanoparticles through conventional Tollens’ reaction and proved their antibacterial efficiency against pathogenic microorganisms. This method is based on reducing [Ag(NH3)2]+ in an aqueous solution by aldehydes in the presence of ammonia 6.

Only a very few scientific studies have been conducted on its medicinal aspects of the plant Ipomoea Aquatica .These include the inhibition of effects on liver diseases 10, constipation 11. Ipomoea Aquatica contains several vitamins, including A, B, C, E, and “U” (S-methyl methionine) and is used to treat gastric and   intestinal disorders 12.

Preparation of the HAEIA: The fresh leaf of IAF was collected and washed with running water. It was shade dried at room temperature and 1 kg of the dried leaf was made in to coarse powder. The powder was passed through a 60 No mesh sieve. Air dried Powdered drug was extracted with mixture of alcohol: water (6:4) (hydro-alcoholic extract) by using Soxhlet extraction apparatus and allowed to stand at room temperature for about 24 hours. Then the extract obtained was filtered, concentrated by rotary vacuum pump to get the solid mass. The weight of extract obtained was 20.6 %.

Synthesis of Silver Nanoparticles: For the synthesis of silver nanoparticles from HAEIA. 50 mL extract was added into the aqueous solution of 1 mM silver nitrate (AgNO3, MW 169.87) in a 1:1 ratio. The sample solutions and the silver nitrate solution were centrifuged at 1200 rpm for 15-30 minutes. There was a visible color change after the substrate was provided to the plant extract. Initially the plant extract was light green. Upon providing the silver salt, it turned red.

Characterization of AgNPs by spectrophotometric analysis: The UV-Vis absorption was analyzed after centrifugation followed by redispersing the particles in deionized water. The reduction of silver ions in the aqueous solution of nanoparticles in the solution could be correlated with the respective UV-Vis spectra of the colloidal solution was analyzed for the absorption ranges from 200 to 600 nm by using Shimachu Spectrophotometer model UV-1601

Characterization of AgNPs by Particle size analysis: Mean particle size diameter and polydispersity index (PDI) were all measured in a solution form directly after synthesis, using photon correlation spectroscopy (Malvern instrument, UK). Silver nanoparticles (2 mL) were added to the quartz cell of the PCS. Measurements were taken to the incident light source at the temperature of 25 °C with count rate of 249.0 kcps.

Characterization of AgNPs by Zeta Potential Measurements: Surface zeta potentials were measured using the laser zeta meter (Malvern zeta seizer 2000, Malvern). Liquid samples of the nanoparticles (5ml) were diluted with double distilled water (50 mL) using NaCl as suspending electrolyte solution (2 x10-2 M NaCl). The pH was then adjusted to the required value. The samples were shaken for 30 minutes. After shaking, the zeta potential of the metallic particles was measured at 12 zeta runs with count rate of 293.1 kcps at temperature of 25.0°C.

Antibacterial activity of AgNPs using Disc Diffusion method: Antimicrobial activity of bio synthesized Nanoparticle (AgNPs) was screened in vitro by disc diffusion assay method against E. coli, S. aureus, P. aeruginosa and B. subtilis and compared with standard drug ciprofloxacin (std disc 10 µg). The target microorganisms were cultured in Mueller– Hinton broth (MHB). After 24 h the suspensions were adjusted to standard sub culture dilution. The Petri dishes containing Muller Hinton Agar (MHA) medium were cultured with diluted bacterial strain. Then sterile discs (Whatman No. 1, diameter 6 mm) were kept and the samples were added in different concentrations of 50,100 and 200 µg to the disc and plates were incubated at 37°C for 24 hours.

The zones of inhibition formed against bacteria were calculated. The diameter of the clear zone around the disc was measured and expressed in millimeters as its anti-microbial activity.

UV-Vis Spectrophotometer: The UV-Vis Spectro- scopy was the preliminary technique for the characterization of the silver nanoparticles. The UV-Vis absorption was analyzed after centrifuging and redispensing the particles in deionized water. The reduction of silver ions in the aqueous solution of nanoparticles in the solution could be correlated with the respective UV-Vis Spectra of the colloidal solution which exhibited a strong absorption between 200 and 400 nm as shown in fig. 1a and 1b. A typical peak was obtained due to the presence of surface plasmon resonance silver nanoparticles. 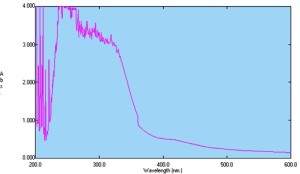 FIGURE 1A: THE UV–VISIBLE SPECTRA OF BIO SYNTHESIZED AgNPs 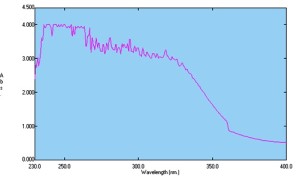 FIGURE 1B: THE UV–VISIBLE ABSORBANCE OF THE SAMPLE SOLUTION CONTAINS AgNPs

Particle size measurements:  Mean particle size diameter and polydispersity indices were all measured in solutions directly after synthesis, using photon correlation spectroscopy (PCS). The size of the colloidal silver nanoparticles, their granulometric distribution has been recorded, expressed against the particles number and their occupied volume.

The data illustrated that the size of the particles was between 77 to 624 nm. The average particle size (z-average) is found to be 150.7 nm. Particle size analysis showed the presence of nanoparticles with polydispersity indices PDI values 0.207 with intercept 0.928 (Table 1 and fig. 2).

Zeta Potential Measurements: A zeta potential was used to determine the surface potential of the silver nanoparticles. For the obtained nanoparticles, zeta values were measured and found to -6.16 mV with the peak area of 100 % intensity. These values provide full stabilization of the nanoparticles, which may be the main reason in producing particle sizes with a narrow size distribution index (Fig. 3). 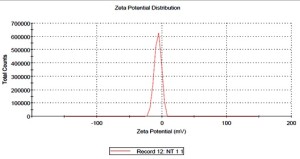 Anti -Microbial Assay: The antibacterial activity of AgNPs was assayed against four common bacterial species belongs to gram negative and gram positive type of bacterium namely: E. coli, S. aureus, P. aeruginosa and B. subtilis in the concentration of 50,100 and 150 µg and compared with standard drug ciprofloxacin (Std disc 10 µg). The effects of silver nanoparticles on the bacterial growth inhibition were monitored and zone of inhibition was measured after 24 hrs of incubation and depicted in Table 2.

TABLE 2: ZONE OF INHIBITION VALUE OF AgNPs AGAINST THE E. COLI, P. AERUGINOSA, B. SUBTILIS AND S. AUREUS 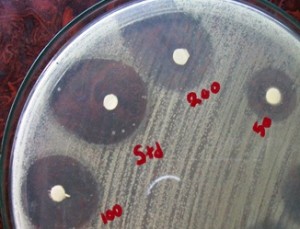 FIG. 4A: EFFECT OF AgNPs ON ESCHERICHIA COLI 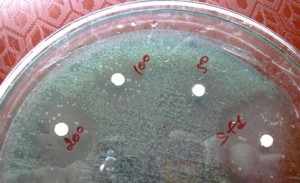 FIG. 4B: EFFECT OF AgNPs ON PSEUDOMONAS AERUGINOSA 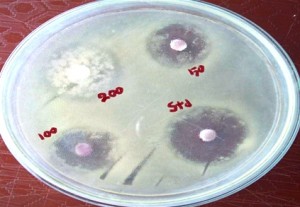 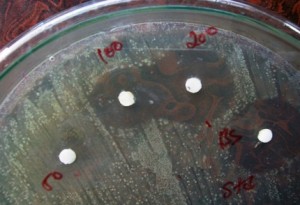 DISCUSSION AND CONCLUSION: Values of the zeta potentials (-6.16 mV) of the extract treated silver nanoparticles in addition to their narrow size distributions provide satisfactory evidence about their little tendency towards aggregation. This behavior unambiguously suggests the presence of strong electric charges on the particles’ surfaces to hinder agglomeration. These values were found to fall in the negative side which showed the efficiency of the HAEIA in stabilizing the nanoparticles by providing intensive negative charges that keep all the particles away from Reddick threshold. Charged particles are able to interact across long distances via electrostatic forces and the surface charge may be disrupted as a way to induce nanoparticles assembly by modifying the condition of the reaction 13-15.

It has been generally believed that the mechanism of the antibacterial effects of silver ions Ag+ involves their absorption and accumulation by the bacterial cells that would lead to shrinkage of the cytoplasm membrane or its detachment from the cell wall 16. At lower concentration, silver nanoparticles directly damage the cell envelope by penetrating the cell and then silver binds to the DNA, this complex prevents the DNA replication by displacement of hydrogen bonds between adjacent nitrogen of purines and pyrimidines 17. As a result, DNA molecules become condensed and lose their ability to replicate upon the infiltration of Ag+ ions.

The average particle size (z-average) is found to be 150.7 nm and the result thus obtained clearly indicates that the unmodified nanoparticles with their smaller size (PDI of 0.207) and unique surface properties are more potent in preventing the growth of the microorganism.

In addition, the nature of the surface treatment plays a paramount role in the ability of the nanoparticles to inhibit the growth of microorganisms.