The main pathways to exposure to arsenic (As) are ingestion, inhalation and skin contact. The harmful effects of arsenic (As) on health are cardiovascular disorders, diabetes and cancer. As it is a known human carcinogen it can adversely affect human health even at low concentrations (0.002mg/l) 10.

The widespread contamination and toxicity of inorganic arsenic (As) is an alarming issue as the metalloid does not degrade, nor can it be destroyed in the environment. It circulates around the earth and produces toxicity. As a result arsenic (As) toxicity has received increasing international attention. The observed arsenic (As) levels in the drinking water often exceed the WHO standard guideline (10 μg/l) in more than 42 nations including China, Australia, Cambodia, Vietnam, Bangladesh and India. Approximately 150 million people have been affected by drinking water contaminated with arsenic (As). The levels of arsenic (As) in drinking water in several countries worldwide cause a major public health issue. The arsenic (As) concentration in the north-eastern states of India is greater than 0.05 mg/l, implying that millions of people are at serious risk of as poisoning 11.

According to the North Eastern Regional Institute of Water and Land Management (NERIWALM) report 2007, the  arsenic (As) levels in Assam, Manipur, Tripura and Arunachal Pradesh were above 300 parts per billion (ppb). According to the World Health Organisation (WHO), uptake of water contaminated with arsenic (As) levels of over 50 ppb can cause skin lesions and even cancer.

Characteristics of Arsenic (As): The name “arsenic” is thought to come from “arsenikon”, the Greek name for the yellow pigment orpiment. Arsenic (As) was discovered approx 1250 by Albertus Magnus. It is a silver grey brittle, crystalline semi- metal or metalloid. It exists in three allotropic forms such as yellow, black and grey. The basic physical and chemical characteristics are given below:

TABLE 1: THE BASIC PHYSICAL AND CHEMICAL CHARACTERISTICS OF ARSENIC (As)

Uses of Arsenic (As): Arsenic (As) is a well-known poison. Arsenic compounds are sometimes used as rat poisons and insecticides but their use is strictly controlled. Arsenic is used as a doping agent in semiconductors (gallium arsenide) for solid-state devices. It is also used in bronzing, pyrotechnics and for hardening shot. The most important use of arsenic is in the preservation of wood. It is used in the form of a compound called chromated copper arsenate (CCA). CCA accounts for about 90 percent of all the arsenic used in the United States. It is added to wood used to build houses and other wooden structures.

Scenario of Arsenic (As) Contamination in India as well as Tripura: According to the investigations of Central Ground Water Board (CG WB) reveals that arsenic (As) contamination (>0.05 mg/L) is affecting the states of West Bengal, Bihar, Uttar Pradesh, Assam, Chhattisgarh. The Bengal Delta Plain (BDP) covering Bangladesh and West Bengal in India is the most dangerous case of groundwater arsenic (As). The water of the West Tripura, Dhali and North Tripura is contaminated with arsenic (As) 18. The concentration of arsenic (As) in groundwater of this areas is in between 65-444 g/l.

The Symptoms of Arsenic (As) Toxicity: The children are often more affected than the adults in the arsenic (As) contaminated areas. Most of the people from a poor socio-economic background are suffering from arsenic (As) skin lesions. The common features were noted (1983 - 2006) from the arsenic endemic areas of India: (i) Skin itching to sun rays, burning and watering of eyes, weight loss, loss of appetite, weakness, lethargy and easily fatigued limited the physical activities and working capacities. (ii) Chronic respiratory complaints were also common. Chronic cough with or without expectoration was evident in more than 50%. 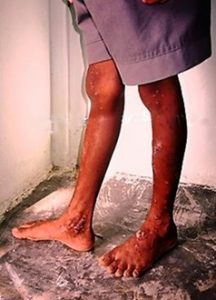 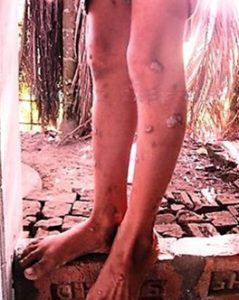 Removal of Arsenic (As) from Groundwater: Dangerous public concerns have been raised worldwide due to ingestion of arsenic (As) contaminated surface and groundwater. There are a number of techniques to remove arsenic (As) from the water 24. In recent years, sustainable, low coast and efficient techniques have gained more attention. Commonly used remediation techniquies for arsenic (As)- contaminated water include oxidation, lime treatment, chemical precipitation / coagulation, ion exchange, adsorption, bioreme-diation, phytoremediation, hybrid membrane process (nanofiltration and ultrafiltration) and electro dialysis 25 - 27. Oxidation is a simple method. It converts arsenite to arsenic. This can be obtained by oxidizing arsenic (As) contaminated water with oxygen, hypochlorite, free chlorine, hydrogen peroxide and permanganate. Other conventional oxidation methods are storage of water for about two weeks, reducing 50% of the arsenic concentration in water and solar oxidation. Arsenic (As) in subsurface water is removed by injecting oxygenated water and ferric chloride into an anaerobic aquifer 28. Atmospheric air and chemical oxidation are simple and low cost methods that aid in the removal of arsenic (As) in rural areas.

Coagulation is a traditional way of removing arsenic (As) from water contaminated with arsenic (As). The arsenic (As) contaminated water is treating by the addition of ferric sulfates, ferric hydroxide, hydrated lime, alum or ferric chloride. Ferric salts are known to be good coagulants. As5+ can be easily removed by coagulation process by the addition of coagulants and formation of aluminium or ferric floc. But, As3+ requires further treatment either by oxidation, filtration or the addition of bleaching powder (chlorine) or potassium permanganate. Mixture of alum and chlorin showed 90% removal efficiency of arsenic at pH 7 29. After coagulation changes in pH, phosphate and silicate levels occur. As the coagulation process involves the use of simple chemicals, only a low capital cost and pre-treatment (oxidation) are required for complete removal of arsenic. Arsenic (As) is generally associated with iron (Fe). So, an excellent sustainable remediation technology for removing of arsenic (As) is co-precipitation of arsenic (As) with iron (ferric sulphate) 30.

Adsorption is an important technique of removing arsenic (As) from the water contaminated with arsenic (As). Adsorbents like activated carbon, hydrous metal oxides, ion exchanger resin, activated red mud, zeolite and ferruginous manganese ore are used to remove smell, colour, organic and inorganic pollutants. The pH is determined the arsenic (As) Arsenic (As) speciation. It is an important indicator in arsenic (As) removal by adsorption. The commercially available absorptive filtration media are activated alumina, activated carbon, kaolinite clay, hydrated ferric oxide, titanium oxide, indigenous filters and many other natural and synthetic filters. It has been reported that they remove arsenic (As) effectively. Another technique of removal of arsenic (As) involves injection of electric current (EC) into aqueous medium containing electrodes. It is also a practiced sustainable method used to treat the contaminated water.

In the aqueous medium the anode produces metal cations and the cations oxidize metal to oxides, creating flocculation, coagulation and settling. The 75% of arsenic (As) was removed by the Electro-coagulation technique at 20V 31. Arsenic (As) is removed by the electro coagulation with iron and aluminium electrodes to the US EPA drinking water standard 32. This method is suitable for a rural area due to absence of any chemicals. This is a simple and cost effective method although it requires frequent changes of the electrodes.

Phytoremediation of arsenic (As in water is occurs with the aid of water plants to detoxify arsenic (As) present in water in combination with electro-chemical technique. The Eichornia crassipes (water hyacinth) and Rhaphydophyceae chattanello plants have the capacity to absorb arsenic (As) by their shoots. The arsenic (As) metal can be extracted through an electrochemical method.

Studies on the use of engineered magnetic nano-particles (NP) (nano zero-valent iron (NZVI), magnetite (Fe3O4), maghemite (γ-Fe2O3) and hydrous cerium oxide (HCO)) in removing arsenic (As) from arsenic (As)-contaminated water is gaining lot of preference due to their high removal efficiency, fast kinetics, reduction, adsorption and magnetic property. However, this technique is relatively much expensive. The nano-particles with NZVI can be desorbed in the presence of phosphorus present in the ground water or by addition of phosphate into groundwater and reused 34-37.

CONCLUSION: This review has summarized the present scenario of arsenic (As) contamination in the different parts of India as well as Tripura, a Northeast state. Various types of skin problems, melanosis, keratosis, hyperkeratosis, dorsal keratosis, non-pitting edema and cancer can be observed in people of these regions. But still the proper health measures cannot be followed these arsenic affected areas. In the absence of alternate source of arsenic (As) free irrigation water, people of the arsenic (As) affected areas have continued to explore new water sources, resulting in further intensification of the problem.

This exhibits that the effects of this occurrence have far-reaching consequences. Sooner we search permanent solutions to solve the problem; otherwise in future it induces environmental, health, socio-economic and socio-cultural hazards. Despite these reports from different governmental and non-governmental institutes, research centres, survey studies is still unsuccessful in providing safe drinking water to the people of these states. A long-term environmental planning and integrated research is required to mitigate the danger of arsenic (As) poisoning.