ABSTRACT: The uses of plant-based products for disease prevention and treatment become increasingly popular in many societies. Plants are considered one of the major sources for many bioactive groups such as alkaloids. The purpose of this study was to determine the rate of alkaloids and investigate antibacterial activity of alkaloid fraction of seeds and leaves from plant, genus Swietenia of S. macrophylla (Familay: Maliaceae) against four pathogenic bacteria namely; Gram-positive: Staphylococcus aureus ATCC1026 and Gram-negative: Escherichia coli ATCC10536, Pseudomonas aeruginosa ATCC15442, and Salmonella typhimurium ATCC14038 based on inhibition zones. For the antibacterial bioassay, two concentrations, 50 and 100 mg/mL of seeds and leaves extracts were prepared and tested by disc diffusion method. The obtained results showed that the plant parts contain various levels of alkaloids, and with appreciable level of antibacterial activity against all tested microorganisms. The seeds extract showed high activity at a concentration of 100 mg/mL compared with leaves at the same concentration, especially against Gram-positive strain. The inhibition zones ranged from 3 to 21 mm for all treatments. The minimum inhibitory concentration (MIC) and minimum bactericidal concentration (MBC) values of the extracts ranged from 12.5 to 50 mg/mL. Furthermore, on TLC screening for phytochemicals groups, positive and interesting results were obtained, and the work underway to identify the bioactive compound(s).

INTRODUCTION: The uses of plant-based products, for disease prevention and treatment become increasingly popular in many societies. The World Health Organization (WHO) has estimated, about 80% of the populations in developing countries relies chiefly on traditional medicine for their health care needs of which a major portion involves the use of plant extracts.

Swietenia macrophylla King (Maliaceae), also known as big-leaf mahogany, locally known in Malaysia as ‟tunjuk langit” is a tropical timber tree that can grow to a height of 40-60 m. The tree is native to the tropical regions of the Americans, including Southern Mexico, Central America and Bolivia 2. In Malaysia, the seeds of the plant are used as folk medicine for treatment of some chronic diseases such as diabetes and hypertension 3. S. macrophylla contained various chemical compounds including alkaloids, flavonoids and saponins that are commercialized in local herbal products 4. It has also previously been reported, that the mahogany species possesses several biological activities, such as antimicrobial, anti-diarrheal, antioxidant, anti-diabetic, anti-nociceptive, anticancer and hypoglycemic activities 5. So far, very few antimicrobial activities of Malaysian S. macrophylla King have been reports. Therefore, the aim of this study was to determine the rate of alkaloids in alkaloidal fraction and to evaluate the antibacterial properties of crude alkaloid extracts of seeds and leaves from Malaysian S. macrophylla against four bacterial strains namely; S. aureus, E. coli, P. aeruginosa and S. typhi.

Plant materials: S. macrophylla plant seeds and leaves were collected on 16 December 2010, from Bukit Mertajan, Pulau Penang, Malaysia. The taxonomic identification of the plants done by Botanist of the School of Environmental Sciences and Natural Resources, National University of Malaysia, Bangi, Selangor. The collected materials (seeds and leaves) were cleaned, sun dried, then grinded to fine powder and stored in air tight bottles until further use.

Alkaloids extraction: Accurately, 20 g of each powder of seeds and leaves separately macerated with 300 mL ethanol (70%) and placed in an orbital shaker at 150 rpm for 24 h at 25 °C. The extract evaporated to one fifth of the initial volume by rotary evaporator, 20 mL of hydrochloric acid HCl (0.1N) added to obtain concentrated extracts. The concentrated extract filtered and extracted twice with 20 mL of chloroform. The latter was treated twice with 10 mL of hydrochloric acid (0.1N), and added ammonia NH3 (0.1N) to obtain an extract of pH = 9; then added 30 mL of chloroform, according to method described by 6. The operation repeated three times then evaporated and the residues dissolved in 20 mL of HCl (0.02N) and titrated with Potassium hydroxide KOH (0.02N) using methyl red as an indicator. The percentage of alkaloids of the seeds and leaves calculated according to the following formula:

Preparation of test concentrations: The alkaloid extracts of the seeds and leaves were dissolved by distilled water to obtain an initial solution concentration of C0 = 500 mg/mL, and from C0 conducted a series of dilutions. The test concentrations were prepared as 50 and 100 mg/mL. The sterile filter paper discs (6 mm diameter) were impregnated with concentrations of each extract. Streptomycin and water were used as positive and negative controls respectively.

Preparation of microbial strains: Four pathogenic microorganisms; one Gram-positive: S. aureus and three Gram-negative: E. coli, P. aeruginosa and S. typhi, were used for antibacterial assay (all microorganisms were lab strains). The bacteria strains were grown in 50 mL of nutrient broth and maintained in nutrient agar slant at 4 °C. The Mueller Hinton Agar (MHA) was used for determination of MIC and MBC.

Qualitative antibacterial activity: The Kirby-Bauer (disc diffusion method) was used for antimicrobial test. Briefly, from colonies of 18 to 24 h, a bacterial suspension was made in sterile distilled water for each strain. The turbidity of this suspension is adjusted to 0.5 McFarland and then diluted 1/100. This gives an estimated inoculum to106 cfu/mL. This inoculum is inoculated by flooding on petri dishes containing Mueller-Hinton agar. Discs impregnated with the different test concentrations of leaves and seeds extract and delicately deposited on the surface of the agar. The petri dishes left for 1 h at room temperature for pre-release substances before being incubated at 37 °C in an oven for 24 h 6. Inhibition zones (including the diameter of disc) were measured. Triplicates were maintained in each extract at the different concentrations and average values were calculated.

MIC and MBC determination: To determine the MIC and MBC, the inoculant of microorganisms were prepared from 18 h nutrient broth cultures. In this method, the broth dilution technique was utilized, whereby the plant extract was prepared to the highest concentration of 100 mg/mL (Stock concentration) in distilled water and serially diluted (two-fold) to a working concentration ranging from 0.78-50 mg/mL using nutrient broth and later inoculated with 1 mL suspension of the test organisms. The positive control was nutrient broth with standard antibiotic and inoculums, whereas the negative control was the nutrient broth and inoculums. After 24 h of incubation at 37°C, the test tubes were observed for turbidity. The lowest concentration which no visible turbidity was observed is noted as the MIC value. The MBC is defined as the lowest concentration where no growth is observed (bactericidal concentration). This was determined from the broth dilution resulting from the MIC test tubes by sub-culturing to antimicrobial free agar as described by 7. In this technique, the content of the test tubes resulting from MIC was streaked using a sterile wire loop on agar plate free of bacteria and incubated at 37 °C for 24 h. The lowest concentration of the extract which showed no bacteria growth was noted and recorded as MBC.

RESULTS AND DISCUSSION: Fig. 1 shows the rate of the alkaloids of seeds and leaves of S. macrophylla. From Fig. 1, the highest rate was obtained with the seeds 2.85%, whereas the value was 1.65% for the leaves. 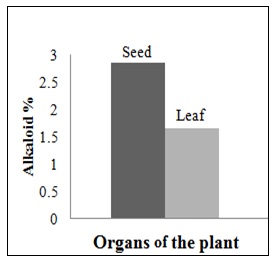 FIG. 1: GRAPH: RATE OF THE ALKALOIDS IN SEEDS AND LEAVES OF S. MACROPHYLLA

Table 1 shows the inhibition activity of the extracts using disc diffusion method. The growth inhibitory effect of the crude alkaloidal extracts against P. aeruginosa, E. coli, and S. aureus, were shown in Fig. 2, 3, and 4 respectively.A clear sensitivity dependent on bacterial strains was observed. At concentration of 100 mg/mL, the highest diameters of inhibitory zones against S. aureus were 21 and 18 mm for seeds and leaves extracts respectively (Fig. 4).

Also inhibitory zones of 12 and 15 mm for Gram-negative E. coli and P. aeruginosa were obtained respectively by seeds alkaloid extract. While the lowest diameter (3 mm) inhibition zone was recorded with S. typhi at 50 mg/mL by leaves extract (data not shown). Table 1 shows the growth inhibitory effect of crude alkaloid extractof S. macrophylla seeds and leaves against four bacteria strains. Both, seeds and leaves were demonstrated inhibitory activities against all tested bacteria strains. Even though, seeds showed a considerably broader antibacterial activity than leaves extracts, which means that seed possess high concentrations or more anti-bacterial phytochemicals (Fig. 1 supports this claim).

Indeed 6 reported the abundant of bioactive groups such as terpenoids, alkaloids and saponins in seeds. It has also previously been reported that 8 have isolated two limonoids, switenolide (1) and 2-hydroxy-3-O-tigloylswietenolide (2) from the seed of the Swietenia mahogany (another species of mahogany). Both compounds showed significant antibacterial activity against eight multiple-drug-resistant (MDR) bacteria strains. It is found that, a clear dose dependent inhibition of the bacteria was observed.

Sm: Streptomycin. Zones of inhibition are mean of three replicates for each microbial strain. 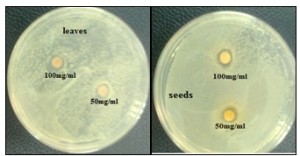 On the other hand, Table 2 shows the MIC and MBC values of crude alkaloid extracts of S. macrophylla seeds and leaves. S. aureus strain showed highest sensitivity and it growth inhibition effect is 12.5 mg/mL. Whereas, E. coli and P. aeruginosa both were being to stop their growth at concentrations of 25 and 50 mg/mL for seeds and leaves respectively. Strain S. typhi does not showed any sensitivity to both extracts.

The minimum bactericidal concentration (MBC) against S. aureus strain was 12.5 and 25 mg/mL for seeds and leaves respectively. The MBC for the other strains were uniform and equal to 50 mg/mL. The quantitative evaluations of alkaloid extracts have shown that the highest percentage was with the seeds, which can be considered as storage areas of the plant alkaloids 6. The highest antibacterial activity was recorded with crude alkaloid extract of the seeds against the Gram-positive bacterial strain S. aureus compared to Gram-negative bacterial strains, and this due to strong resistance of Gram-negative bacterial strains to antibiotics.

CONCLUSION: The results obtained from the current study are promising. Both seeds and leaves extracts of S. macrophylla King have demonstrated inhibition activity towards a panel of bacteria. Seeds showed high rate of alkaloids and high growth inhibitory effect especially against Gram-positive strain. The inhibition zones ranged from 3 to 21 mm. The minimum inhibitory concentration (MIC) and minimum bactericidal concentration (MBC) values of the extracts ranged from 12.5 to 50 mg/mL. Furthermore, the TLC screening for phytochemicals showed interesting bioactive groups. Therefore, the study is underway in terms of purification, isolation, identification of the bioactive compounds.

The authors also thanks botanist of the School of Environmental Sciences and Natural Resources, National University of Malaysia, Selangor (UM) for the Plant identification.