ABSTRACT: Blood parameters are important indicators for assessing the health status of living organisms subject to changing environment. Blood parameters (Hb%, TEC, TLC, ESR, PCV, MCH, and MCV) of Heteropneustes fossilis exposed to lead were investigated at different time intervals. Acclimatized specimens were divided into four groups: Group-A (Control), Group-B (2.25 ppm), Group-C (2.65 ppm), Group-D (2.85 ppm) of Pb and examined at 7, 14, 21 and 28 days’ time intervals. The maximum impact of the treated metal was observed on ESR (Erythrocyte Sedimentation Rate) [1.80 mm/h (Control) to 2.90 mm/h at 2.85 ppm of lead] during maximum time exposure (28 Days) whereas PCV (Packed Cell Volume) showed a fall [44.00 % (control) to 28.00% (2.85 ppm] at 28 Days pe (post-exposure). The other parameters also showed changes in their values when exposed to lead being highest at 2.85 ppm doses during maximum time exposure (28 Days). The above findings indicate that lead adversely affects the blood physiology as reflected in hematological values.

INTRODUCTION: Water is an integral constituent of all living things, and it is the universal biological solvent. Modern industrial and agricultural techniques require the use of many million tons of fertilizers, heavy metals and pesticides. These effluents find their way into aquatic systems through surface runoff from industries or as a result of the discharge of these wastes into streams and rivers. They pose a constant threat to non-target organisms such as fish and insects and tend to bio-concentrate the inorganic and industrial wastes 1, 2.

The industrial complexes have become the focus of environmental pollution 3. The main pollutant from these industrial complexes is effluent, which contains heavy metals such as Cu, Ni, Zn, Pb, Cr, Hg, Cd, and various organic compounds like phenols and formaldehyde. The recovery of these heavy metals using conventional techniques is neither economical nor eco-friendly 4, 5. Once aquatic organisms accumulate heavy metals they can be transferred to higher trophic levels of the food chain. Carnivores at the top of the food chain including humans receive most of their heavy metal burden from aquatic ecosystems by way of their food, especially where fish are present 6.

The important route of absorption of this heavy metal by man and other aquatic animals is by ingestion and inhalation. Lead accumulation results in various long and short term effects or diseases in humans and animals like memory loss, learning impairment and other diseases 7. It is one of the most dangerous and insidious metallic poison 8. The metal is known to impact the blood values in fish 9, 10 to the extent of damaging chromosomal complements 11, 12. It has toxic effects on a variety of freshwater organisms with low sensitivity of 4 μg/L 13. Acute toxicity of lead is mainly due to mucous induced respiratory asphyxiation and the disruption of Ca2+ and Na+ homeostasis 14. LC50 studies of lead in Clarias batrachus were reported 15. The use of hematological techniques in fish culture for toxicological research, environmental monitoring and fish health conditions has grown rapidly in recent years 16, 17, 18. Hematology is an indicator of immunological status and can provide a definitive diagnosis of fish during toxicant exposure 19, 20, 21. Hematological indices are of different sensitivity to various environmental factors and chemicals 22. Studies have shown that when the water quality is affected by toxicants, any physiological change is reflected in values of one or more hematological parameters of aquatic organisms 23, 24. However, some workers noted that there is a possibility that studies on fish blood might reveal conditions within the body of the fish long before there is an outward manifestation of disease 25. The effects of heavy metals including lead on hematology and other changes of catfish were observed by several investigators 10, 26-30.

The effluents of the pharmaceutical industry affected the blood of Clarias gariepinus indicating that Pb was present in effluents in undesirable amounts, which induced significant changes in hematological parameters (RBC, HCT, HGB, MCV, MCH, WBC and lymphocytes) 31. In the present study, the hematological parameters (Hb, TEC, TLC, ESR, PCV, MCH and MCV) of catfishes, Heteropneustes fossilis subjected to Pb exposure were investigated. It is envisaged that the results will assist in providing base-line information on lead toxicity with respect to H. fossilis.

MATERIALS AND METHODS: Heteropneustes fossilis (20-30 gms) (n=16) of each group (one control, three lead-exposed) were collected from different fish markets of Bareilly district and acclimatized for 7 days to laboratory conditions. The groups were designed as follows:

Blood was collected from the caudal vein of fish with the help of an anticoagulated syringe and Hb %, TEC, TLC, ESR, PCV, MCH and MCV were estimated according to established research methodology 32.

ESR values increased in different groups showing the peak value (2.90 mm/h) during the highest concentration at higher time exposure (28 days: Group D) while the minimum value of ESR (2.10 mm/h) was recorded during 7 days in Group B Table 1. ESR showed the maximum percentage changes (68.69%) at highest concentration during 28 days exposure period Fig. 4. PCV value of control group was 44%, the lowest value (28.00%) of PCV was observed in group D (28 days: 2.85) while minimum reduction was observed at 7 days at the lowest concentration (2.25 ppm) Table 1. 36.36% changes in PCV were observed at 2.85 ppm of Pb during 28 days pe Fig. 5. 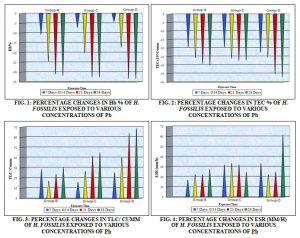 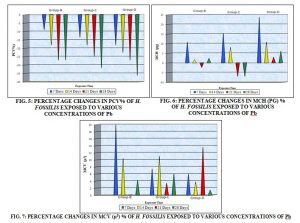 DISCUSSION: The importance of hematology in the diagnosis of fish anomalies and for evaluating the effect of pollution has been accepted widely. The application of hematological techniques like Hb, TEC, TLC, ESR, PCV, MCH and MCV, have proved valuable for fishery biologists in determining the health status of fishes. H. fossilis exposed to various concentrations of lead (2.25 ppm, 2.65 and 2.85 ppm) showed variations in hematological parameters. Different fish species show differentiation in sensitivity and reaction to heavy metals including lead, which has been reported by many workers. The influences of heavy metals on hemoglobin reflect the O2 carrying capacity of blood. Reduction in Hb% was recorded in the blood of Clarias gariepinus during short term exposure of lead 33. Consistent reduction in hemoglobin concentration in white fish Coreganus species poisoned with lead has been reported 34.

Hemoglobin percentage declined during lead exposure in (T. tinca 35, C. gariepinus, 26, 35, 36 Cyprinus carpio 37, and Oreochromis nitoticus 38). Research indicated a significant reduction in the Hb% which may lead to anemic condition in Channa punctatus 39. Another research supported our findings on hemoglobin in the bunny fish Mesopotamichthyssharpeyi exposed to lead 40. In another experiment, the same catfish (H. fossilis) exposed to cadmium, reported a significant decrease in Hb% during 7, 14 and 21 days as compared to the control fish 41.

The value of WBCs increased in the blood due to pollution and stress corresponding to the lead concentration and time exposure when Anguilla anguilla was exposed to different concentrations of lead 42. A significant increase in immunological parameters (TLC) following lead exposure suggests that lead may weaken the immune system, resulting in increased susceptibility to infection 43. Increased WBC counts due to exposure to Pb in the blood of Oreochromis niloticus 38 and Channa punctatus 39 further support our findings.

The results fall on similar lines when the same species of experimental fish were treated with lead nitrate 30. WBC count and serum enzyme also increased in fish exposed to Dioatylphthalate 44.

Contrary to the findings of WBC, the total erythrocyte counts in the blood of the investigated catfish constantly depleted corresponding to the increases in concentration and time exposure to lead. These findings are in concurrence to those reported in Oreochromis niloticus 45 and also studies by other authors 27, 46, 47, 48. Various heavy metals and toxins enter the aquatic system and exert a specific toxic effect on fish blood 49. Similar results on RBC depletion are supported in other fish species as well, Clarias gariepinus 30, Mesopotamichthys sharpeyi 40 and Channa punctatus 30. ESR values showed an increase in different exposed groups. Heavy metal toxicity causes inflammatory lesions associated with tissue damage, anemia and neoplasia. Further, an increase in fibrinogen or serum globulins or a decrease in serum albumin may also cause an increase in the ESR. An increase in ESR values suggests that anemia was of macrocytic type 51. These findings are supported by research 52, 53, 54.

The values of PCV showed a fall to 28% during the highest concentration and maximum exposure period. Anemia is a manifestation of acute and chronic in toxification by heavy metals. A decrease in PCV% treated with lead occurred in Clarias gariepinus 55 and the results are supported by other findings 56, 53, 57. PCV gradually increased up to 45 days but declined after 60 days of exposure to chromium in Channa punctatus 54. Contrarily, elevated values of PCV in the blood of Coruh trout occurred after treatment with Pb 58. The level of hematocrit in control fish was not significantly different but Pb exposed fish showed a significant difference when compared to the control fish 59.

MCH expresses the average hemoglobin concentration in individual erythrocyte counts. In the present study, MCH increased rapidly during the initial exposure of lead and values further reduced when lead concentration and exposure time increased. This is in agreement to the finding who reported a short term exposure of lead in T. tinca 35, Clarias gariepinus 26 and Hetroclarias 56 exposed to zinc and a significant fall in Channa punctatus exposed to copper 53. The recovery in MCH values were also recorded who identified that lead toxicity affected the concerned hematological parameters and its recovery in long term exposure 57. Notable works on zinc 60 and Pb and Cd 61 exposure in common carp have been reported. Pb showed a higher significant decrease in MCH values as compared to other heavy metals. Lower values of MCH occurred during 7, 14, and 30 days exposure period but these were recovered after 60 days of exposure to chromium trioxide in fresh water teleosts 54.

The decrease in hemoglobin concentration represents that the capability of the fish to supply adequate oxygen to the tissues gets limited considerably and this results in the decline of physical stir 62. Elevation in MCV and MCH (Group D) shows macrolytic type anemia in Clarias gariepinus 27 and rainbow trout 63. High values of MCV subsequent to lead exposure were recorded in O. niloticus 57. Significant reduction in MCV in the blood of common carp exposed to lead 61 was reported but no significant changes occurred in MCV when the same fish was exposed to cadmium 64. Most of the hematological parameters of the market fishes, Channa punctatus and Heteropnestes fossilis showed significant alteration from their control values when subjected to heavy metals 65.

CONCLUSION: The present study suggests that heavy metals are responsible for causing a variety of hematological anomalies. The studies also infer that blood may be utilized as a pathophysiological reflector of the whole body and therefore blood parameters may be regarded as important diagnostic tools for assessing the structural and functional status of fish exposed to toxicants.

The toxicity test helps in evaluating the nature and degree of the harmful effect produced on the aquatic organism, especially fish by toxic substances and provides valuable information that can be used for the protection of the aquatic ecosystem as a whole.

ACKNOWLEDGEMENT: The authors express their thanks to the Head, Department of Animal Science, MJP Rohilkhand University, Bareilly, UP, India for providing laboratory facilities.