The powdered leaf of Vernonia galamensis (Asteraceae) is a herbal drug used in the treatment of diabetes mellitus in folk medicine in northern Nigeria. The crude aqueous extract of the leaves is deliquescent and usually stored in airtight desiccators. Efforts to use common diluents such as lactose, starch, and magnesium carbonate for tablet formulation of the extract produced tablets with defects such as “sticking” and “picking”. The purpose of this study was to use the Heckel and Kawakita equations to investigate the compressibility of the granules of the deliquescent crude extract of Vernonia galamensis prepared using gelatin a universally accepted pharmaceutical binder and selected efflorescent pharmaceutical diluents namely; Aerosil® 200, Avicel® PH 103 and calcium phosphate. The Kawakita model provided an excellent fit having higher R2 values than the Heckel model. The very low PK values of the Kawakita (indicating good fluidity) for all the different formulations made it preferable in explaining the compressibility of granules of the extract. The ranking for good compressibility based on the diluent type using gelatin as binder was as follows; calcium phosphate > aerosil® 200 > Avicel® PH 103.

This necessitates the need for standardization and formulation of the medicines in conformity with current Good Manufacturing Practice (GMP). Some researchers have chosen the tablet over other dosage forms for the formulation of medicinal plant extracts 2 due to the advantages of the former. Most plant extracts are hygroscopic and susceptibility to microbial degradation, so the choice of a suitable pharmaceutical dosage form that will conform to current GMP cannot be overemphasized. Tablets are by far the most frequently used dosage form for all active medicinal ingredients; they have advantages for both manufacturer and user.

The purpose of this study was to use the Heckel and Kawakita equations to investigate the consolidation behavior of granules of the dry crude leaf extract of Vernonia galamensis (EVG) prepared using gelatin (GLT) a universally accepted pharmaceutical binder and selected efflorescent pharmaceutical diluents namely; Aerosil® 200 (AR), Avicel® PH 101 (AV) and calcium phosphate (CP). The EVG is highly hydroscopic and deliquescent and is stored over silica gel in a dessicator. Efforts to use common diluents such as lactose, starch, and magnesium carbonate for tablet formulation of the extract produced tablets with defects such as “sticking” and “picking”. In the attempt to check the deliquescent characteristics of the extract, efflorescent diluents were selected for this formulation process.

The Heckel equation has by far been the most popular in recent years among pharmaceutical scientists, and many apparent yield pressure values (‘in-die”, Py) and mean yield pressure values (‘out-of-die’) of active substances and tableting excipients have been published 4. The model has often been applied to study powder mixtures and to evaluate granule manufacture. Of recent, scientists have also made attempts to use the Heckel relation for predicting powder characteristics of active crude plant extracts 2.

Despite the versatility of the Heckel equation however, drawbacks and limitations to its use have been reported 4. Some scientists have used more than one equation to try to eliminate the shortcomings of the other 5, 6. Hence, in this study, both Heckel and Kawakita plots have been used to assess the compression characteristics of EVG in combination with the three efflorescent diluents; AR, CP and AV.

Heckel Analysis: The plots constructed according to the Heckel equation 7 were used to characterize the consolidation behavior of the formulations:

Where D is the ratio of the density of the powder mass at pressure P to the density of the powder mixture (i.e., relative density); K, the slope of the straight portion of the graph, reflects the reduction in porosity or the resistance to volume reduction of granules and A is a constant. The yield pressure, PY, is usually calculated as the reciprocal of the linear portion of the slope of the Heckel plot. The relative density DA was calculated from the intercept, A, using the equation:

Kawakita Analysis: The Kawakita equation 8 describes the relationship between the volume reduction of powder column and the applied pressure;

Where, C, is degree of volume reduction, Vo is Initial volume, V is volume of powder column under the applied pressure P. a, b are constants characteristic to powder being compressed. The equation above can be re arranged in linear form as:

From the graphical presentation of P/C versus P, the constants maybe evaluated. The constant “a”, is given as a reciprocal of the slope from the linear portion of the plot and equivalent to the value of C at infinitely high pressures. 1/ab is the intercept. a, gives an indication of the maximum volume reduction available and is considered to describe the compressibility of a powder, while b is considered to describe an inclination toward volume reduction. However, the actual physical meaning of the constants a and b have been in question 9. Consequently, Kawakita in 1983 have applied another equation in describing the volume reduction on tapping and vibrating processes, where the pressure P, is replaced by the tapping number, N 10.

Where, N is the tapping number, C is the degree of volume reduction and a and b are constants. C in equation vi is given by;

Where Vo is the initial apparent volume and VN, the volume at tapping number N. The constants of Kawakita equation can be used to estimate the flow and cohesiveness properties of powders. Constant “a”, describes the compressibility and constant “1/b” describes cohesive properties of powders or the fastness of how the final packing stage is achieved 9.

Materials: These include Gelatin (May and Baker, Germany), aerosil® 200 (GmbH, Meggle, Germany), avicel PH-103 (FMC Corporation, USA) calcium phosphate (BDH chemicals Ltd., Poole, England), maize starch (May and Baker, Germany) and the leaves of Vernonia galamensis (collected from the natural habitat of Ahmadu Bello University, Zaria, Nigeria and identified in the herbarium unit of the Department of Biological Sciences of the University where a sample was deposited with a voucher specimen number 994).

RESULTS AND DISCUSSIONS: Three types of powder compression behavior have been identified based on the Heckel’s equation, namely type A, B and C 12. Figure 1 depicts the Heckel plots obtained for the granulations formulated with AR, AV and CP as diluents and GLT at 5% w/v concentration as binder. The plots especially for formulations containing AR and AV exhibited linear and near parallel relationships at all applied pressures, where increase compression pressure significantly increase the relative density of the compacts. This implies that the plots are indicative of type-A materials and that all the granules principally undergo deformation by plastic flow 13. 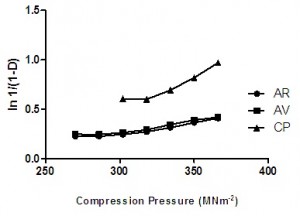 The observed deformation characteristics (plastic flow) for all samples used may be due to the extreme hygroscopic and deliquescent nature of the extract. This is because earlier report had indicated that the deformation characteristics for all samples of the extremely hygroscopic and deliquescent chondroitin sulfate were by plastic flow 14. The increase in slope at higher pressure indicates an increase in the rate of densification as the void spaces between particles decrease. Figure 1 also shows that the EVG/AV compacts were compressed at higher relative densities than those of EVG/AR and EVG/CP.

The tendency of the material to deform either by plastic flow or fragmentation is described by the yield pressure Py, which is an important indication of granule compressibility. A faster degree of plastic deformation is reflected by a low Py value (steep slope) in a general sense. Table 1 show that formulations made with AV as diluent gave lower Py values than those with either AR or CP, indicating that granules of the former deformed plastically at lower pressures than those of the later ones. But negative intercepts were observed in all the different formulations using the selected efflorescent diluents. This negative values of intercepts may be due to the intrinsic characteristics of the extract; being deliquescent in nature. The negative intercepts gave rise to negative values of both DA and DB by calculation.

Given some more thoughts to this; DA represents the total degree of densification at zero and low pressures and DB represents the particle rearrangement phase in the early compression stages which also indicate the extent of granule fragmentation 9. This means that for any situation where zero values of DA and DB are obtained, it would mean that there is no densification at zero and low pressure and no particle rearrangement phase or granule fragmentation at all. But in this situation where negative values (less than zero values) of the DA and DB were obtained, it is impracticable to explain the degree of densification at zero and low pressures and the particle rearrangement phase or the extent of granule fragmentation by the use of the Heckel equation.  This is a limitation of the equation in this study.

Figure 2 shows the kawakita plots for Vernonia galamensis tablet formulations containing selected diluents and GLT as binder, where a linear relationship between N/C and N is obtained at all compression pressures used with correlation coefficient ≥ 0.99 for all the formulations, and hence, the equation can be used to predict the densification mechanisms of the Vernonia galamensis formulations better than the Heckel equation where negative intercepts were observed. 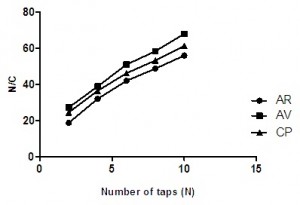 Values of 1/b and 1/ab were obtained from the slope and intercept of the plots respectively. The tapping experiments were performed on all samples and a and 1/b were evaluated. It was observed from Table 2 (which shows the Kawakita constants) that values of ‘a’ were smaller in the formulations with CP than in the formulation with AR and AV implying that the fluidity of the CP is better.

CONCLUSION: Two models namely; Heckel and Kawakita models were fitted to the pressure-density-volume data. Although the Heckel model presented acceptably high R2 values, the negative values of DA and DB made it difficult to practically explain the degree of densification at zero and low pressures and the particle rearrangement phase and extent of granule fragmentation. We can therefore conclude that the Kawakita model with high R2 values and no negative intercept is preferred in explaining the compressional characteristics of granules of Vernonia galamensis prepared using GLT as binder along with the selected diluents (AR, AV, CP).

ACKNOWLEDGEMENTS: The authors are grateful to Abu Garba, Lido Gilama and Sunday Dzarma of the National Institute for Pharmaceutical Research and Development for technical assistance in the laboratories.