ABSTRACT: Helicobacter pylori causative agent of acid peptic disease is a microaerophilic, spiral-shaped, gram-negative bacteria found in the gastric epithelium that may also lead to complications such as chronic gastritis, mucosa-associated lymphoid tissue (MALT) lymphoma, gastroduodenal ulcer and adenocarcinoma in stomach. Plantbioactives have always been potential therapeutics. Usage of modern bioinformatic tools plays a vital role in exploiting the potentials of alternative therapeutic molecules in managing diseases like peptic ulcers and their complications. The in-silico evaluation was carried out using molecular docking of the quorum sensing proteins of H. pylori with the ligand β-sitosterol obtained from the silver nanoparticles of Acorus calamus L. Among several given quorum sensing proteins the molecular interaction with the ligand β-sitosterol showed a high binding affinity with DnaA, PhnB, ToxB and Sip proteins. The results obtained from molecular interaction study revealed that the ligand β-sitosterol will be readily taken up by the organism, thereby facilitating easy inhibition or inactivation of quorum sensing molecules ToxB, DnaA, PhnB, and Sip, making it a novel therapeutic alternative to treat H. pylori infections.

INTRODUCTION: The acid peptic disease is a condition due to frequent pathogenic actions involving excessive secretion of acid resulting in acid reflux, thereby damaging esophageal mucosa and laryngeal tissue. Further peptic ulcer condition is complicated by secretion of pepsin and gastric acid that damages mucosa and causes ulcers in the lower esophagus and duodenum region.

This acidity related disease hampers the lifestyle quality of individuals leading to rampant morbidity and mortality. Even in a developed country like the US, 40% of youth frequently complain of Heartburn, highlighting gastroesophageal reflux disorder (GERD) as one of the most common disorders 1.

Presently, there are 3 lines of antibiotic therapies for the treatment of H. pylori-related complications viz., Concomitant & hybrid therapy, Bismuth quadruple & Levofloxin therapy, and Culture guided therapy 2. The antibiotics of choice for treating H. pylori infections are metronidazole, tetracycline, clarithromycin, amoxicillin, fluoro-quinolones, tinidazole along with bismuth salts or proton pump inhibitors (PPIs). Resistance to particular antibiotics has made to use the combination of drugs in areas where there is more prevalence of resistance to a single antibiotic 3.

H. pyloriis an S-shaped, gram-negative bacteria with sheathed and polar flagella, which grow in microaerophilic conditions and is varied by its turns/spirals and size 4. H. pylori are most likely to spread from person to person through oral-oral, gastro-oral, or fecal-oral route. Other sources of transmission recorded in the literature also include contaminated water, iatrogenic modes, especially during endoscopy and rarely zoonotic transmission, too, though direct contact with the individuals remains the most prevalent spreading method 5. One of the most common bacteria that infect the world’s 50% of the population leading to peptic ulcer and adenocarcinoma is H. pylori 6. Acquisition of H. pylori infection is controlled by the persistence of infection and also infection rate loss 7.

Quorum sensing in H. pylori is an evident phenomenon. Still, it lacks in understanding the detailed mechanism of various proteins involved in quorum sensing and requires in-depth and vast research in the field. Currently, only a few quorum sensing genes have been annotated, which includes LuxS and ToxB. These are the only two quorum sensing proteins which have been structurally annotated and the sequence of which is currently available in Protein Data Bank and GenBank.

*Note: Proteins obtained from cross-reference of KEGG and GenBank.

LuxS is a well-known quorum sensing molecule involved in the production of autoinducer II, which is found to be involved in the formation of lesions, which results in the easy access of the pathogen into the host cell. Thereby further spreading the infection to the nearby cells and tissues, leading to host tissue necrosis. The inhibition of LuxS prevents the ability of the organism to invade host tissue/cells through cytolysis 10.

ToxB, GTP cyclohydrolase is an essential protein involved in the acclimatization of H. pylori in acidic conditions. This protein prevents the degradation of the bacterial cell wall in the host intestine and helps in the growth and homeostasis of the bacteria. The particular protein lays the foundation for the establishment of biofilm in the host, thereby directly influencing the propagation of infection and invasion into the host cell 11. 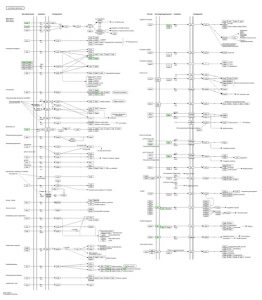 Structural Annotation of Protein of H. pylori: Structure of LuxS and ToxB proteins were procured from Protein Data Bank (PDB) and were found to be fit for further in-silico analysis without the requirement of any further modifications. The structures of DnaA, PhnA, PhnB, FliC, and Sip were unannotated and required ab-initio structure building. The sequences of these five proteins were obtained from the GenBank database of H. pylori proteome and were subject to structure prediction using the Raptor-X tool 11.

Binding Site Prediction of Proteins: The binding sites of LuxS and ToxB proteins were analyzed and obtained through the ligand explorer tool. The amino acid residues of the binding sites of structurally annotated proteins DnaA, PhnA, PhnB, FliC, and Sip were predicted using B Spread tool of Yang Zhang Lab 12, 14.

Molecular Docking: The molecular interaction studies of the prepared ligand with all the seven proteins were performed using rigid docking studies using Autodock suite (v.4.2.6) using genetic algorithm setting to check the interaction of β-sitosterol with the proteins where the grid was set for the binding site, and the protein macromolecule was set as a rigid molecule, and the various possible confirmations of ligand were generated16.

Visualization: Upon completion of molecular docking, the various confirmations of a ligand in association to respective proteins were visualized to analyze various interactions of ligands with the binding site residues of the protein using UCSF Chimera visualization tool, based on the type of interaction, a number of interactions and docking score, the best-fit orientation of the ligand was selected 16. 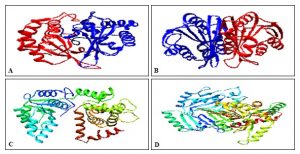 Validation of Protein Structures: The structures of DnaA, PhnA, PhnB, FliC, and Sip procured from RaptorX were validated through Ramachandran plot analysis using Phenix (v.1.13) and are depicted in Fig. 4 - Fig. 8. Only structures which had at least 95 percent of the residues in the favorable region and around 2 percent of the residues in the allowed regions were considered to be fit for molecular interaction studies. 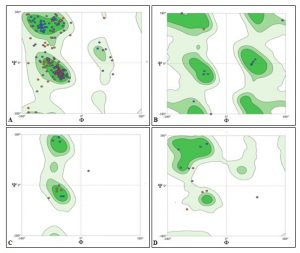 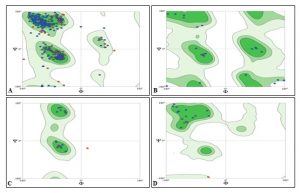 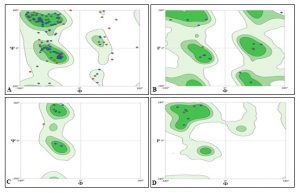 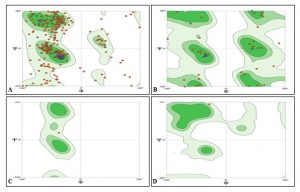 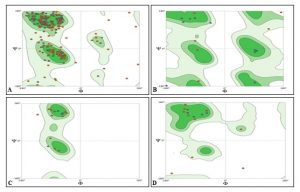 Binding Site Prediction of Structurally Annotated Proteins: A congruence binding site obtained from various algorithms of Bspread was considered for molecular interaction studies of DnaA, PhnA, PhnB, FliC, and Sip. Each protein showed involvement of at least six residues information of the binding site. The binding sites of respective proteins have been depicted in Fig. 9 - Fig. 13. 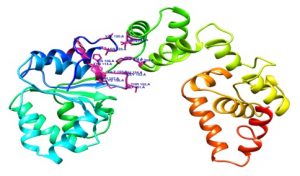 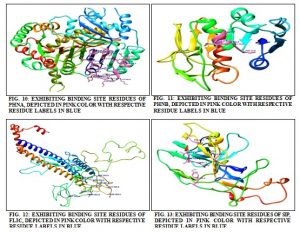 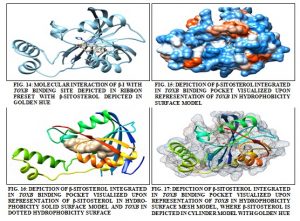 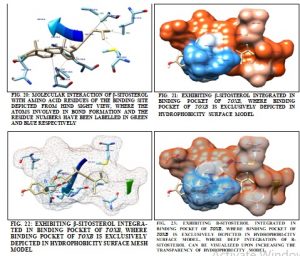 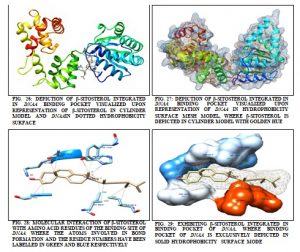 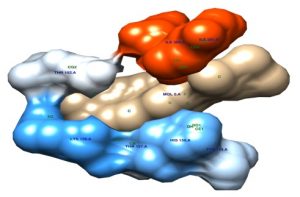 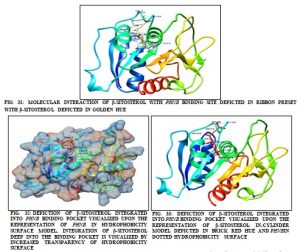 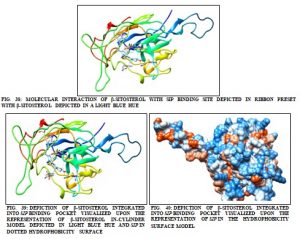 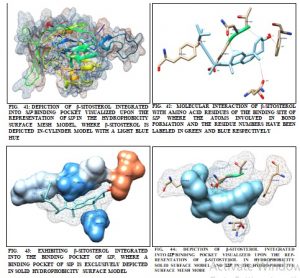 CONCLUSION: Molecular interaction studies reveal that the ability of Acarus calamus in inhibiting biofilm formation in H. pylori might be due to the inhibitory effect of phytobio-active component, β-sitosterol, against quorum sensing molecules- ToxB, DnaA, PhnB, and Sip, making it a novel therapeutic alternative to treat H. pylori infections.