ABSTRACT: Shigellosis becomes a major health problem of developing countries. It is caused by Shigella spp. Shigella dysenteriae causes the most severe; prolonged and fatal Shigellosis by its ability in producing Shigatoxin (Stx). Unfortunately, there has not been any effective vaccine available in worldwide and using antibiotic is no longer effective. Adhesion molecule of bacteria can be used as component of vaccine as its facilitates attachment into host in which the adhesion molecule located in Outer Membrane Protein (OMP). This research aims to confirm the molecular weight (MW) of OMP’s sub unit protein that acts as an adhesion molecule of S.dysenteriae. OMP was isolated using NOG 0.05% and profiled using SDS PAGE. Dominant sub unit protein was purificated using electroelution method. According to Hemagglutinin Assay (HA), sub unit protein with MW 35.47 kDa has the ability to agglutinate mice eritrocyte in the highest titer compared to another sub unit protein. Various concentrations of 35.47 kDa protein (100µg, 50µg, 25µg, 12.5µg dan 6.75µg and 0µg) were used in the assay to confirm the adhesion rate into the mice enterocyte. Protein 35.75 kDa has a closer relationship with the number of bacterial adhesion. The protein concentration significantly influences the bacterial adhesion number into the mice enterocyte {(R2) 0.85, p= (<0.01) < α (0.05)}. The higher concentration of protein results on the fewer bacterial adhesions. Based on the result, it can be concluded that the sub unit protein 35.47 kDa in OMP of S.dysenteriae acts as an adhesion molecule that can inhibit the bacterial adhesion into the mice enterocyte.

INTRODUCTION: Shigellosis, which is caused by Shigella, has caused eighty millions cases of diarrhea with bleeding. From the number, it is predicted that there are 700.000 of death. The highest number of death, for about 60%, existed among less than 5 years children 1.

Shigella is a Gram-negative, basil, and non-motile bacterium, in included in Enterobactericeae group. Its genus contains four species: Shigella dysenteriae (S.dysenteriae), Shigella flexneri, Shigella boydii dan Shigella sonnei. S.dysenteriae can cause a heavier, longer, and more severe clinical manifestation rather than other Shigella. It is due to its ability in producing Shiga toxin (Stx) that can destroy microvascular endothel that will cause bleeding in gastrointestinal 2.  Its adhesion process becomes the significant component in the bacterial invasion process, where after its adhesion the bacterium will release its virulent factor.

It is incubated at 37 0C within 24 hours. The culture on the media was harvested using a scraping  that has been poured with sterile PBS 7.4 pH as much as 10 ml. The bacterial suspension resulted from the scraping was then poured into a bottle containing 1000 ml of brain heart infusion broth (BHI) solution. Then, the bottle was shaken for 30 minutes in the water bath at 37 0C.

Outer Membran Protein (OMP) Isolation: Bacterial pellet was suspended with PBS 7.4 pH then added with n-octyl- β-D-glucopyranoside (NOG) solution with 0.05 % concentration. Then, the homogenization was done with full speed vortexs within 1 minute. After the homogenization, pellet was separated from its supernatant using centrifugation with 10.000 rpm speed at 4oC within 15 minutes. OMP was resulted from the supernatant, whereas the pellet was isolated again with NOG. The process was repeated for three times.

Hemagglutinin Assay (HA): HA was done according to the guideline by Hanne and Finkelstein 10. Sample dilution was made at the concentration of ½ of microplate where V of each well volume was 50 ml. In each well was added mice erythrocyte suspension with the concentration of 0.5% in the same volume of 50 ml. Then, it was shaken with rotator plate within 15 minutes. After that, it was put at the room temperature within 1 hour. The number of titer was determined through the observation of erythrocyte agglutination existence on the lowest dilution. The tested sample was the result of purification of each resulted OMP band. Balb/c mice erythrocyte was used here.

Mice Erythrocyte Isolation: Based on Weiser method from Nagayama11, the intestinal tissue was cut for 5 cm length, then cut transversely. The content of intestinal tissue was cleaned using liquid containing PBS pH 7.4 dithiothreithol 1 mm. The result was mixed with solution containing 1.5 mM KCl; 9.6 mM NaCl; 2.7 mM Na-sitrat; 8 dan 5 mM KH2PO4; 6 mM Na2HPO4 pH 7.3. It was then incubated at 37 0C and shaken within 30 minutes. The solution was then replaced with PBS pH 7.4 and solution containing 1.5 Mm EDTA, and 0.5 Mm dithiothreitol pH 7.4 and incubated at 370C and fast shaken within 20 minutes.

The result was then washed with PBS pH 7.4; dan centrifuged with 1000 rpm speed within 5 minutes at 4 0C, the washing process was repeated for 3 times, the result was suspended in PBS pH 7.4, slowly shaken. The result was pipette using a sterile pipette and entered in a sterile tube. The resulted enterocyte then was diluted until 106 per ml, and was kept at 4 0C

Adhesion Index Test: Adhesion inhibitory test method was based on Sumarno 8.  S.dysenteriae was diluted until Optical Density (OD) 1 using spectrophotometer with the wave length of 580 nm. OMP protein sample resulted from electroelution was diluted with 100 µg, 50 µg, 25 µg, 12.5 µg, 6.75 µg dan 0 µg using sterile PBS pH 7.4. In each protein dilution was then added 100 µl of enterocyte isolate. Protein enterocyte suspension was shaken within 30 minutes at 37 oC. Then, 100 µl of bacterial suspension was added and it was reshaken.

20 µl of suspension from each protein dilution that has been extracted was smeared on a glass preparat, then Gram coloring was done and the observation was also done using a microscope to count the number of bacteria adhering on 100 of enterocyte.

RESULT: The following is the picture of OMP S.dysenteriae profile using SDS PAGE 12.5% (Fig. 1). Based on Fig. 1 it can be identified that there are some clear and thick protein bands on the molecule weights of 11.93 kDa; 19.19 kDa; 23.74 kDa; 32.33 kDa; 35.47 kDa; 40.26 kDa; 64.6 kDa; and 72 kDa. From 3 times of isolation process using NOG, band pattern with a consistent molecule weight is obtained. The first isolate results on clear and firm protein bands, but on the second and third isolates, protein bands appear to be thinner. 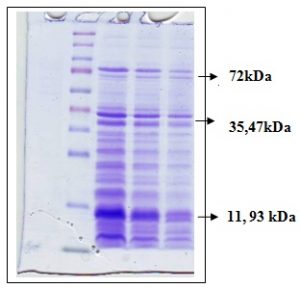 Each of clear protein bands was then purified using electroelution to be used in HA assay that its result is described on Table 1. Protein 35.47 kDa can agglutinate mice erythrocyte cell with the highest titer compared to other sub unit protein. Therefore, protein 35.47 kDa becomes a sub unit protein candidate that acts as an adhesion molecule on S.dysenteriae.

Since protein 35.47 kDa is the strongest candidate, therefore the protein was diluted with different concentration in the treatment, so 100 µg, 50 µg; 25 µg; 12.5 µg; 6.75 µg; 0 µg (without the protein administration) were obtained to determine number of bacterial adhesion on mice enterocyte. Adhesion test result on mice enterocyte can be seen on Fig. 2. 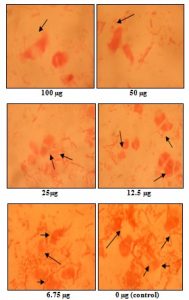 Bacteria that adhere on 100 enterocyte in each different protein concentration then were calculated. Regression analysis on adhesion test result can be seen on Fig. 3 and 4. 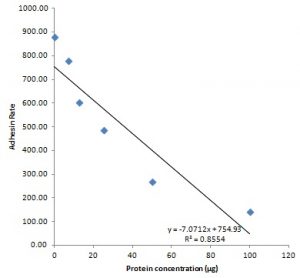 DISCUSSION: S.dysenteriae causes Shigellosis, where it causes a longer symptom, causes a more severe clinical manifestation so it gives a fatal effect to its patient, compared to other Shigellosis caused by S.flexneri, S.boydii, and S.sonnei 1. It is due to S.dysenteriae has an ability to produce Shigatoxin (Stx) that can cause bleeding in gatrointestinal 6. Early stage of the bacterial infection process is the adherence on the host ‘cell. To adhere, receptor on the host ‘cell is needed. In this case is the receptor on the enterocyte, also ligan possessed by the bacterium. Besides the adhesion using bacterial pili on its end, it also needs a close bond using afimbrial adhesin on its outer membrane 4.Through the electron microscope observation, we can identify that Gram-negative bacterium is covered by membrane layer outside of its peptidoglycan layer. This layer is different to cytoplasm or inner membrane. These two membranes can be differentiated through its density 12.

The predominant protein is probably protein that is expressed in a large quantity. As it is known there is 50% of outer mass membrane containing protein, as integral protein or lipoprotein. Some integral membrane protein as Omp A and most of porin are expressed in the high level. Besides, there are some minor protein and is synthesized as the effect of a very strong induction when it is needed, as porin (PhoE and LamB), TonB-dependent receptors (e.g. FhuA and FepA), some of protein component, which is needed in export system, as auto transporter system and I until III system, including Type III secrestion apparatus (T3SS), protein existed on pili and flagella, enzym dan fosfolipase, which all of its function has not been known yet and described absolutely 13.

Whereas the increase of color firmness fade of protein band is confirmed due to the depletion of protein on the isolated outer membrane. To find an adhesion molecule candidate on OMP, some of bacterial adhesions have been proven capable of agglutinating erythrocyte (act as hemagglutinin), as pili protein 49.8 kDa of S.dysenteriae, pili protein of V.cholerae 38 kDa dan 76 kDa on OMP 7.

This experiment proves that OMP protein sub unit with BM 35.47 kDa as an adhesion molecule. It is a little bit different with adhesion molecule possessed by OMP S.flexneri 2a and S.flexneri 3a which is BM 34 kDa and 38 kDa. BM 34 kDa possessed by OMP S.flexneri has been identified as integral protein which is Omp A that has an imunogen characteristic so that it can be used as a vaccine candidate. It can induce the development of Ig A and IgG and activate the production of Th1, mediate macrofag stimulation and upregulate MHC CD80 dan CD 40 expressions that activate T CD 4 cell 14.

Adhesion molecule on S.dysenteriae on its pili, which is on BM 49.8 kDa is an adhesion molecule that can inhibit bacterial adhesion on enterocyte.  This protein also has been researched capable of inducing increasingly the production of s-IgA on mice that has an effect in decreasing colon epithelium damage, and decreasing bacterium colonization in colon 15. Besides, antibody 49.8 from pili can inhibit the bacterial adhesion of S.dysenteriae on enterocyte 16. It has been explored too that protein 11.65 kDa is also a receptor protein 17. With this research result, it is expected to give a contribution to the further experiment to develop a vaccine research that is based on adhesion molecule, especially in dealing with Shigellosis.

CONCLUSION: Based on the result, it can be concluded that the sub unit protein 35.47 kDa in OMP of S.dysenteriae acts as an adhesion molecule that can inhibit the bacterial adhesion into the mice enterocyte.

ACKNOWLEDGEMENT: Author thanks to Magister Biomedical Study Program, Faculty of Medicine, Brawijaya University for giving opportunity to finish this researche. Author also thanks to Department of researche and Community Service Academy of Food and Pharmacy Analyst Putra Indonesia Malang.