Flaxseed is being consumed as an ingredient in various food formulations as it plays a major role in the field of diet and disease research due to its potential health benefits associated with a- linolenic acid (57%) and its rich phytoestrogens or lignans.  Hence, presently, it is in great demand by food industries and in nutraceutical applications.  The present study was carried out using 80, 32-weeks old, Single Comb White Leghorn (SCWL) laying hens which were subjected to 4 dietary treatments, namely Control, 5% flaxseed endosperm-rich fraction (ERF), 10% ERF and 20% ERF. At the end of the 4th week, all groups were examined hematologically and histopathologically. There was a linear relationship between feed consumption and decrease in body weight. The decrease in the weight of the birds was directly proportional to the concentration of ERF in the diet. Packed cell volume (PCV) and red blood cell (RBC) counts had a negative significance (p<0.05) linear relationship with the ERF level.  There was a decrease in PCV and RBC counts as ERF increased in the diet. Broadly, the livers of birds fed with 20% ERF were enlarged, pale in color, soft in consistency and were haemorrhaged with fat and fibrin deposits. Histopathologically, livers of the fed with 20% ERF of flaxseed showed fatty infiltration, haemorrhages and masses of eosinophilic materials. The vacuoles coalesced to create a clear space that displaced the nucleus to the periphery of the cell. It was concluded that the addition of anti nutritional constituents from ERF of flaxseed in dose dependent manner resulted in marked macroscopic and microscopic changes in the liver. Additionally, it was also responsible for an increased level of MCH and PCV.

INTRODUCTION: Flaxseed commonly known as linseed (Linum usitatissimum), is an important oilseed crop grown around the world for its oil and fiber.  It contains nutrient, non-nutrient and anti-nutrient components. It has both beneficial and/or adverse effects depending upon dose, timing and length of exposure. Among the bioactive nutrients in flaxseed, a-linolenic acid (ALA, C18:3) is the prominent one. Flaxseed has gained importance in food industries, as a component of designer food, functional food and value added products. It has high content of lignans, which exert nutraceutical and therapeutic principles in addition to a- linolenic acid 1.  Flaxseed is the richest source of phytoestrogen or plant lignan secoisolarisirecinol diglucoside (SDG), which constitutes about 75-800 times higher than any vegetarian food sources 2.  In addition to high content of SDG, a mammalian lignan precursor, and it is also well known for other accompanied lignan precursors such as matairesinol, pinoresinol, lariciresinol and isolariciresinol, relatively in lower levels 3.

Lignans are an important phytoestrogen with weak estrogenic and anti-estrogenic properties, and posses diverse biological activities. Epidemiological studies have reported the chemo preventive effects of lignans on tumors of colon, skin and mammary glands 4. SDG exhibits a wide range of health promoting activities, which is an effective against the onset of various sort of cancers such as breast, colon and prostate 5-6.  The consumption of flaxseed based diet by rats caused protective effects against cardiovascular diseases such as reducing the level of LDL cholesterol and aortic atherosclerosis 7. SDG of flaxseed is well known for antioxidant, antibacterial, antitumor, antiviral and cytotoxic properties 8-9. Earlier reports have demonstrated a reduction in vitamin E levels in plasma and liver of rats fed with 20%   flaxseed 10-11.  There is growing awareness about the use of flaxseed as a source of food and also for several therapeutic principles.

However, there is a controversy about nutritional benefits and safety of flaxseed due to its complex nature because of the presence of some antinutritional factors such as phytic acid, cyanogenic glycosides. Antinutritional factors such as tannins, lectins, phytic acid, cyanogenic compounds, trypsin inhibitors and L-Dopa present in mucuna seed showed higher impact in keets than in adult guinea fowls 12. Antinutritional factors like saponins of Napoleona imperialis seed have been reported for palatability problem that suppressed intake of diet with 10% soaked N.imperialis seed meal 13. Hence, the present study was conducted to evaluate the hematological and histopathological effects of endosperm rich fraction of flaxseed in chicks.

Chemicals: All the solvents and chemicals used for the experiments were of analytical grade obtained by Sigma Chemicals Co., St. Louis, MO. USA. Solvents used for HPLC were of HPLC grade and purchased from Ranbaxy fine chemicals Ltd. Mumbai, India.

Flaxseed material: The flaxseeds used in this study was grown in Ranebennur, North Karnataka, India, was procured from the local market. The University of Agricultural Sciences, Hebbal, Bangalore, India identified and authenticated the variety as LVF-01. Flaxseeds were de-hulled using Kisan Krishi Yantra Udyog, Kanpur, India situated at Department of Grain Science and Technology, CFTRI, Mysore, India to obtain endosperm rich fraction for the study.

Hematological studies: At the end of 4th week, all the 6 birds from each group were starved for 24h but water was provided during this period. They were weighed and classified according to live weight.  The birds were exposed to chloroform for 5-10 min before they are sacrificed and slaughtered. About 3 ml of blood was collected from wing vein of each bird and transferred into a vial containing heparin for hematological studies.  Hemoglobin content was estimated by cyanometh hemoglobin method 18 and total red blood cells (RBC) and differential count lymphocytes, neutrophils, monocytes, eisinophylls and erythrocyte indices or wintrobe’s constants such as, mean corpuscular volume (MCV), mean corpuscular hemoglobin (MCH) mean corpuscular hemoglobin concentration were estimated by standard clinical procedures 19.

Statistical analysis: The data from six replicates were processed by one-way ANOVA using the least significant test to determine the level of significance at p £ 0.05.

TABLE 1: HEMATOLOGICAL DATA OF LAYING HENS FED ON CONTROL AND DIFFERENT LEVELS OF ENDOSPERM RICH FRACTION (ERF) OF FLAXSEED BASED DIETS FOR 4 WEEKS

Values are mean ± SD (n=6). Values not sharing a similar superscript within the same column in a group over 4 weeks are significantly different (P<0.05) as determined by ANOVA 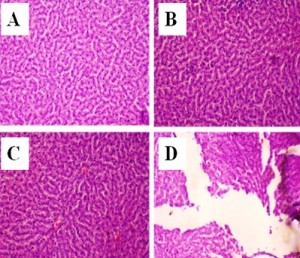 FIG. 1: HISTOPATHOLOGICAL STUDIES OF LIVER OF LAYING HENS FED ON CONTROL AND DIFFERENT LEVELS OF ENDOSPERM RICH FRACTION (ERF) OF FLAXSEED BASED DIETS FOR 4 WEEKS. A. CONTROL, B.5% ERF, C. 10% ERF, D. 20% ERF OF FLAXSEED

In the liver, degenerative reversible lesions were present, from mildest to severest degree with various distributions in ERF of flaxseed fed groups.  Mild parenchymatous degeneration characterized by granular appearance of the hepatocyte cytoplasm, severe hydropic and vacuolar degenerations were also noticed.  A significant cytoplasmic vacuolization was noted in the vast majority of hepatocytes. Added to this, disseminated necrotic cells were observed in the treated groups.

In kidney, no adverse effects were found in treated groups of ERF of flaxseed, when compared to control group. In lungs, congestion and mild perivascular edema were noted only in 20% ERF treated birds, when compared to control group. In the intestine, there were no changes at all in the untreated animal group (control group), but the mildest form of inflammation, catarrhal inflammation, was observed in experimental birds. Statistically, significant differences in gross tissue liver were noticed at the end of the 4th week trial due to the dietary treatment.

DISCUSSION: The possible negative effects of nutritional components in flaxseed might be due to its high content of linolenic acid, a polyunsaturated fatty acid. Since, multiple double bonds present in these fatty acids undergo oxidation and results in the formation free radicals. Therefore, use of flaxseed based diet at higher dosage for a longer period might causes an increased oxidative stress and a reduced antioxidant vitamins. There are reports on use of flaxseed fed to rats at 20% caused a reduction in plasma and liver vitamin E levels 10-11. The major antinutritional factors present in flaxseed are phytic acid, cyanogenic glycosides and linatine.  Linatine binds to vitamin B6 and could cause harmful effects results in deficiency of vitamin B6 6. Consequently, vitamin B6 deficiency results in an increased homocysteine followed by renal deficiency 21. Linustatin is also an anti nutritional factor containing cynogenic compounds 22-23.

Flaxseed based diet fed to healthy female volunteers at 50 g/day resulted in 2 fold increased level of thiocynate conent of Urine 24.  Phytic acid is another anti nutritional factor in flaxseed known for its binding with positively charged minerals like calcium, iron and zinc, which could be responsible for deficiency of minerals affect on development of bones 25-26. The nutritive value of legumes depends upon the processing methods, presence or absence of antinutritional factors.  The factors responsible for toxicity of flaxseed based diet for chicks are antagonists of vitamin B6 14.  The goitrogenic effect of flaxseed meal was tested on rats and ewes by feeding with flaxseed based diets 27. Depending upon dosage, timing and length of exposure, nutritional and non-nutritional components of flaxseed can have both beneficial and harmful effects.

Therefore, in the present study, use of endosperm rich fraction of flaxseed which may also contain antinutritional factors or the experiment carried out was for shorter period that may not be sufficient to show the effect on birds metabolism of the body or the antinutritional factors present in the endosperm rich fraction of flaxseed may not be detoxified by these adult birds used in the experiment without showing any effect. This is in agreement with earlier studies 10-11.  Cyanogenic glycosides, which are physiologically important but quantitatively at minor levels, are present in flaxseed. These are secondary metabolites of plant derived from amino acids valine and isoleucine results in liberation of hydrogen cyanide over hydrolysis 28.

Akande and Fabiyi 29 reported that soaking, cooking, toasting, autoclaving; microwave cooking, pressure cooking, extrusion cooking, germination and chemical treatment improve the quality of legumes because of the removal or inactivation of some anti-nutritional factors. Linustatin is the most abundant cyanogen found in flax, and the total content varies significantly between cultivars. This hydrogen cyanide content can be significantly reduced by some methods such autoclaving, microwave roasting, and pelleting 30.

Linatine, a vitamin B6 antagonist that is present in the cotyledons of flaxseed has limited the use of whole flaxseed based diets in poultry, can be eliminated by demucilaging of flaxseed 31. Therefore, the Indian flaxseed cultivar LVF-01 was used to evaluate its harmful effects in chicks.

CONCLUSION: In conclusion, to improve the nutritional quality and to provide effective utilization of legume grains for poultry, it is essential that anti-nutritional factors be removed or reduced. Hence, endosperm rich fraction, a byproduct of dehulling processing of flaxseed was used rather than the whole flaxseed in the current study.  Thus, overall, the present study on histological and hematological studies for both control as well as experimental diets indicated that the inclusion of different graded level of ERF of flax seed affected adversely and found to be safer if it is used at lower levels.

J. Rajesha*, A. Ranga Rao , B. Madhusudhan , G. A. Ravishankar and M. Karunakumar