ABSTRACT: The liver plays a significant role in metabolism and detoxification. Aponogeton natans(Linn.) Engl. and Krause is a important ingredient in preparation of an important Ayurvedic preparation Useerasava. The screening for hepatoprotective activity against carbon tetrachloride induced hepatotoxicity was followed as per standard procedure. Animals received CCl4 (2 ml/kg, 1:1 in olive oil, i.p.) to induce hepatotoxicity. Group I served as normal control and received the vehicle alone. Group II served as toxic control, Group III, IV, V, VI received 200 mg/kg of petroleum ether, benzene, chloroform, methanol extracts respectively and Group VII was treated with silymarin. The groups received the pre-treatment of A. natans extracts ANME and ANCE at dose levels of 200 mg/kg body weight significantly controlled the change in the biochemical parameters. The methanol extract (ANME) and chloroform extract (ANCE) at dose levels of 200 mg/kg exhibited significant increase respectively in the serum total protein level as compared to toxic control group and the effect was compared with the standard group treated with silymarin (Sily-100). The LPO, SOD, Catalase (CAT) and GPx activities in the toxic control group depleted significantly as compared to the normal control group. The antioxidants activity increased by ANME, ANCE and standard drug silymarin. Treatment with A. natans methanol extract increased the level of biochemical parametrs activities when compared to toxic control. A. natans methanol extract was found to significantly increase the level of antioxidants levels. The level of LPO which was elevated brought to normal. The above results were further supported by histopathological evidences.

INTRODUCTION: The liver is plays a significant role in metabolism and detoxification of exogenous toxins and therapeutic agents 1. A number of natural and synthetic agents act as hepatotoxins and produce a variety of liver diseases. There are number of herbal extracts, which are reported to have antihepatotoxic activity 2.

Aponogeton natans (Linn.) Engl. and Krause is an ingredient in preparation of an important Ayurvedic preparation Useerasava. This asava is useful in haemothermia, anaemia, impurity of blood and diabetes 5. A perusal of existing reports reveals that the no detailed hepatoprotective study had been done earlier. The study has been planned to investigate the hepatoprotective activity of various extracts of Aponogeton natans (Linn.) Engl. and Krause. leaf with leafstalks against CCl4 induced liver toxicity in experimental animals.

Plant Material: Fresh parts of Aponogeton natans (Linn.) Engl. and Krause. were collected from Salipur, Cuttack, Odisha, India which was identified and authenticated by Professor P. Jayaraman, PARC, Chennai. The voucher specimen was given the No. PARC/2009/398.

Preparation of Extract: The air dried powdered leaves with leafstalks was loaded into soxhlet apparatus and was subjected to extraction for about 72 hours with petroleum ether (60 - 80 ºC), benzene, chloroform and methanol successively. The solvents were distilled off after extraction and the extracts were concentrated under reduced pressure. The extracts were kept in refrigerator until tested 6. The four extracts were then subjected to phytochemical analysis. For the pharmacological tests, the extracts were dissolved in 1% Tween-80 in normal saline solution to prepare 200 mg/kg concentrations.

Experimental Animals:  Wistar albino rats of both the sex weighing 140 - 160g were used for the toxicological studies. The animals were kept in standard conditions of day and night cycles at 22 ºC in polypropylene cages. The animals were given on standard pellet water ad libitum. The rats were acclimatized to laboratory conditions by housing them in propylene cages prior to the experiments for one week. The experiment was conducted in Institute of Pharmacy and Technology, Salipur, Cuttack and CPCSEA recognized local Ethical Committee approved the protocol bearing No. 19/IAEC-IPT/13.

Carbon Tetrachloride Induced Hepatotoxicity Model: The screening for hepatoprotective activity against carbon tetrachloride induced hepatotoxicity was followed as per standard procedure 7 - 9. The rats were divided into seven groups with six rats in each. Group I served as normal control and received the vehicle alone (Sterile distilled water, 2 ml p.o.) for 5 days. Group II served as toxic control animals received CCl4 (2 ml/kg, 1:1 in olive oil, i.p.) on the 3rd and 4th day. Group III, IV, V, VI received 200 mg/kg of petrolium ether, benzene, chloroform, methanol extracts respectively and Group VII was treated with silymarin (10 mg/kg) for 5 days and on the 3rd and 4th day CCl4 (2 ml/kg, 1:1 in olive oil, i.p.) was given 1 h after the treatment of the extract. The animals were sacrificed 48 h after the last injection of CCl4 under mild ether anaesthesia. The blood was collected and allowed to stand for 30 min at 37 °C and centrifuged to separate the serum to estimate various biochemical parameters.

Histopathological Study of Liver and Kidney: The histopathological study was carried out for liver and kidney tissue. The liver was transferred to 4% formalin solution and processed for histopathological studies following the standard procedure described by 14. The microtome sections were taken and stained with hematoxylin and eosin. The section thus obtained was scanned in Carl-Zeiss microscope with photographic facility and photomicrographs were taken.

TABLE 1: EFFECT OF A. NATANS EXTRACTS ON BIOCHEMICAL PARAMETERS IN CCl4 INDUCED HEPATOTOXICITY IN RATS

TABLE 2: EFFECT OF A. NATANS EXTRACTS ON ANTI-OXIDANT PARAMETERS IN CCL4 INDUCED HEPATOTOXICITY IN RATS

Values are mean ± SEM (n=6) one-way ANOVA followed by Tukey’s multiple comparison column test. Where, a=P≤0.001, b= P≤0.01, c=P≤0.05 vs Toxic Control d= P≤0.001, e= P≤0.01, f= P≤0.05 vs Control Hepatotoxicity induced by CCl4 is the most commonly used model system for the screening of hepatoprotective activity of plant extracts/drugs. The total protein and albumin levels decreased due to the hepatotoxin intoxication. The reduction is attributed to the damage produced and localized in the endoplasmic reticulum which results in the loss of P - 450 leading to its functional failure with a decrease in protein synthesis and accumulation of triglycerides.

In the present study, CCl4 intoxication reduced the serum total protein and albumin levels. The pre-treatment of methanol extract (ANME) restored the total protein and albumin levels. The rise in protein and albumin level suggests the stabilization of endoplasmic reticulum to protein synthesis 10. The liver marker enzymes (AST, ALT and ALP) are cytoplasmic in nature; upon liver injury these enzymes enter into the circulatory system due to altered permeability of membrane. In this study, significant increase in AST and ALT levels in the serum was observed after administration of CCl4. ALP level also increased after CCl4 administration. The increased levels of these enzymes significantly decreased by pretreatment with methanol extract (ANME). Reduction in the levels of AST, ALT and ALP towards the normal value is an indication of stabilization of plasma membrane as well as repair of hepatic tissue damages caused by CCl4 11.

Many studies have demonstrated that the hepatoprotective effect of plant extracts may be related to its antioxidant capacity to scavenge reactive oxygen species. CCl4 intoxication reduced the total protein level in liver homogenate, which restored significantly with the pre-treatment of methanol extract (ANME). Liver cells have antioxidant defense system consisting of antioxidants named as GSH and antioxidant enzymes mainly catalase and GPx to protect its own cells against oxidative stress condition, which causes destruction of cell elements and finally cell death 12.

GSH is mainly distributed among living cells and is tangled in many biological and cellular functions, substituting in a role as an indispensible intracellular reducing agent for maintenance of intracellular redox status. It is also the most indispensable biomolecule protecting against chemically generated cytotoxicity, by playing a role in the destruction of reactive agents by conjugation and hydroperoxide reduction, or by direct quenching of free radicals. CCl4 intoxication slightly reduced the level of GSH, which was significantly restored in methanol extract (ANME) treated (higher dose) rats. Trichloromethyl peroxy radical, the metabolic product of CCl4 binds covalently to the macromolecules and causes peroxidative degradation of cellular membrane leading to the necrosis of hepatocytes. The hepatic antioxidant enzymatic activity of catalase and GPx significantly decreased in CCl4 intoxicated rats as compared with control rats.

The declined enzymatic action would result in an increased steady-state level of oxidants, adding to cell injury. The catalase level was increased by administration of methanol extract (ANME) to CCl4 intoxicated rats suggesting that it has the capacity to restore the enzyme action towards normalizing in CCl4 injured liver.

However, administration of methanol extract to CCl4 intoxicated rats had less effect in hepatic GPx activity and relative liver weight as compared to the CCl4 treated toxin control group. This result suggests that methanol extract (ANME) markedly inhibited CCl4 induced liver damage by elevated hepatic antioxidant enzymatic system such as catalase and GSH. The rise in marker enzymes level in CCl4 treated animals has been attributed to damaged structural integrity of the liver 13.

Administration of the methanol extract (ANME) preserved the structural integrity of the hepatocellular membrane as evidenced from attenuation of the marker enzymes level when compared to CCl4 treated animals. It was further verified by the histopathological judgement of the liver tissue.

Histopathological Study of Liver in CCl4 Induced Hepatotoxic Rats: The histopathological feature, as shown in (Fig. 1) indicated the normal liver lobular architecture and cell structure of the liver in the normal control animals. There were no pathological changes observed in normal control animals. In CCl4 treated animals, Some centrilobular hepatocyte necrosis, microvesicular fatty change and extensive fatty change were observed on the midzonal or entire lobe there was a vacuolar degeneration of hepatocytes around central vein with moderate to severe hepatocyte necrosis due to CCl4 toxicity (Fig. 2). 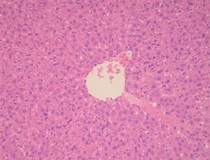 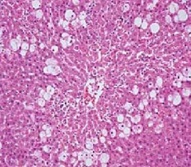 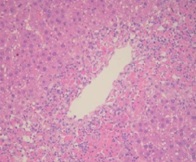 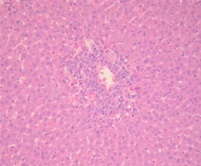 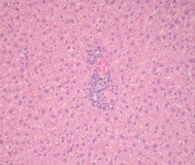 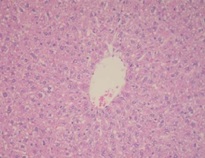 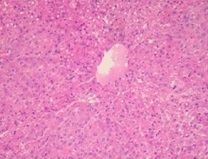 CONCLUSION:  The results obtained from CCl4 induced hepatotoxic model in rats indicated that  after treatment of toxicants there was significant rise in SGOT, SGPT, ALP and total bilirubin and total protein levels. Treatment with A. natans   methanol extract increased the level of SGOT, SGPT, ALP, total bilirubin and total protein activities when compared to toxic control.   In case of antioxidant enzyme, A. natans methanol extract was observed that it significantly increase the level of SOD, CAT and GPX. The level of LPO, which was elevated due to hepato toxicant, was brought to normal. Histopathological evidences further supported the above results. In conclusion, the results of this study demonstrated that A. natans methanol extract is effective for the prevention of CCl4 induced hepatic damage in rats and therefore it could be used as a hepatoprotective agent. The protective effects against liver damage may be attributed due to the free radical scavenging effect, inhibition of lipid peroxidation, and increased antioxidant activity 15.