ABSTRACT: India is the largest producer of the medicinal plants and is rightly called the “Botanical Garden of the world”. The objective of the present study is to evaluate the hepatoprotective activity of aqueous extract of Inflorescence (IA) and Pollen grains (PA) of Casuarina equisetifolia belongs to the family of Casuarinaceae against Paracetamol induced hepatotoxicity in Wistar rats. The aqueous extract of Casuarina equisetifolia IA and PA (250mg/kg and 500mg/kg. p.o.), were administered respectively to the animals. The drug Paracetamol (2g/kg. p.o.) was used to induce the hepatotoxicity and the drug Silymarin (25mg/kg. p.o.) was given as the reference standard. The plant extract was effective in protecting the liver against the hepatotoxicity induced by the Paracetamol in rats. This was evident from the significant reduction in serum enzymes like Serum glutamic pyruvic transaminase (SGPT), Serum glutamic oxaloacetic transaminase (SGOT), alkaline phosphatase (ALP) and total bilirubin (TB) levels. It was concluded from the result that the aqueous extract of Casuarina equisetifolia IA and PA possesses good hepatoprotective activity against Paracetamol induced hepatotoxicity in Wistar rats.

INTRODUCTION: The liver is a vital organ present in vertebrates and some other animals. This organ plays a major role in metabolism and has a number of functions in the body, including glycogen storage, decomposition of red blood cells, plasma protein synthesis, high-volume biochemical reactions, hormone production and detoxification, many of which are necessary for normal vital functions.

The liver is necessary for survival; there is currently no way to compensate for the absence of liver function 1. But it is continuously and variedly exposed to environmental toxins and abused by poor drug habits and alcohol and prescribed and over-the-counter drug which can eventually lead to various liver ailments like hepatitis, cirrhosis and alcoholic liver disease.

Thus liver diseases are some of the fatal disease in the world today. They pose a serious challenge to international public health. Modern medicines have little to offer for mitigation of hepatic diseases and it is chiefly the plant based preparations which are employed for their treatment of liver disorders. But there is not much drugs available for the treatment of liver disorders.

Therefore; many folk remedies from plant origin are tested for its potential hepatoprotective liver damage in experimental animal model. Paracetmaol induced hepatotoxicity model is widely used for the study of hepatoprotective effects of drugs and plant extracts 2, 3.

India is the largest producer of the medicinal plants and is rightly called the “Botanical Garden of the world” 4. The toxicological effects of most of the crude extracts are often overlooked based on the facts that plant medicines have better compatibilities with the human body and produce fewer side effects, although the adverse effects, sometimes life-threatening, allegedly arising from herbal remedies consumption 5. Casuarina equisetifolia belongs to the family Casuarinaceae is found in the dry hill sides and open forests of India, Sri Lanka and Australia 6. This species is an important raw material for many major paper mills in India 7. It has been widely cultivated in Florida for coastal landscaping, as an ornamental shade tree and agricultural promotion - whether as fuel wood, timber or planted as windbreaks bordering groves 8. The phenolic compounds from the needles (branchlets) and bark showed significant antioxidant activity 6. Bark is having activities like astringent, in stomacheache, diarrhea, dysentery and nervous disorders.

Seeds are anthelmintic, antispasmodic and antidiabetic. Extracts of leaves exhibit anticancer properties 2. The needles in decoction form used as lotion for swelling and also used in the treatment of cough and ulcers 9. The extracts of the fruits, stem and leaves are reported to have anti microbial activity 10. The extracts of the areal parts and stem is reported to have angiotensin-converting enzyme inhibition activity 11. However, no scientific reports in the modern literatures are available regarding hepatoprotective activity on Inflorescence and Pollen grains of Casuarina equisetifolia. Thus the objective of the present study was to test the hepatoprotective activity of aqueous extract obtained from Inflorescence and Pollen grains of Casuarina equisetifolia against Paracetamol induced liver damage in Wistar rats.

Plant Materials and Preparation of Aqueous Extract: The dried Inflorescence was collected in bulk from Padmabhushan Dr. B. V. Raju foundation, Vishnupur, Bhimavaram, West Godavari (District), Andhra Pradesh, India. Then the debris and leaves were removed from the collected material and dried in shade. The Pollen grains were separated from Inflorescence (Fig. 1).  It was coarsely grounded in a mixer. This coarse powder was macerated with distilled water for 24 hrs. The extracts were filtered through muslin cloth then evaporating to dryness under shade to obtain the aqueous extract successively (Chloroform was used as a preservative while drying). This dried extract was collected and was stored in a dessicator for further use.

Animals: Wistar rats weighing between 150-200g were used for this study. The animals were obtained from Sanzyme Limited, Hyderabad, India. The animals were placed in polypropylene cages with paddy husk as bedding. Animals were housed at a temperature of 23 ± 2 °C and relative humidity of 30 - 70%. A 12:12 light: day cycle was followed. All animals were allowed to free access to water and fed with standard commercial pelleted diet. All the experimental procedures and protocols used in this study were reviewed and approved by the Institutional Animal Ethics Committee (1712/PO/a /13/CPC SEA/13/4).

TABLE 1: EFFECT OF INFLORESCENCE AND POLLEN GRAINS OF CASUARINA EQUISETIFOLIA ON WISTAR RATS ON LIVER ENZYME BIOMARKERS IN SERUM AGAINST PARACETAMOL - INDUCED HEPATOTOXICITY 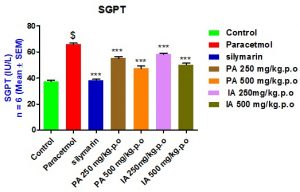 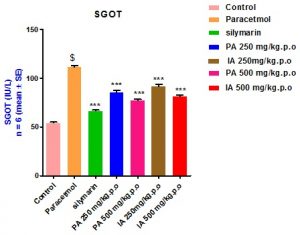 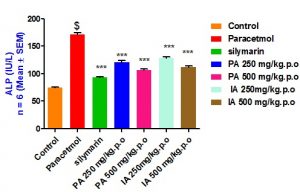 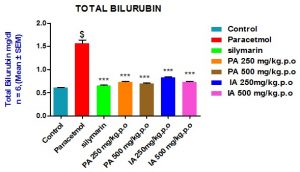 DISCUSSION: Paracetamol induced hepatotoxicity is caused by the reaction metabolite N-acetyl-p-benzo quinoneimine (NAPQI), which causes oxidative stress and glutathione depletion. It is a well-known antipyretic and analgesic agent, which produces hepatic necrosis at higher doses. Paracetamol toxicity is due to the formation of toxic metabolites when a part of it is metabolized by cytochrome P - 450. Introduction of cytochrome or depletion of hepatic glutathione is a prerequisite for Paracetamol induced hepatotoxicity. Normally, SGOT and ALP are present in high concentration in liver. Due to hepatocyte necrosis or abnormal membrane permeability, these enzymes are released from the cells and their levels in the blood increases. SGPT is a sensitive indicator of acute liver damage and elevation of this enzyme in non hepatic diseases is unusual.

SGPT is more selectively a liver paranchymal enzyme than SGOT. Assessment of liver function can be made by estimating the activities of serum SGPT, SGOT, ALP and Total Bilirubin which are enzymes originally present higher concentration in cytoplasm. When there is hepatopathy, these enzymes leak into the blood stream in conformity with the extent of liver damage. That is why; Paracetamol-induced liver damage is commonly used experimental model to evaluate the potency of hepatoprotective agents 13. Silymarin is a polyphenolic antioxidant component obtained from Silybum marianum. It is used traditionally as an immunostimulant, hepatoprotectant, and dietary supplement. Silymarin also has chemopreventive and antineoplastic agent. Its hepatoprotective activity is due to the presence of flavonolignans principal.

The present study (hepatoprotective activity) was tested by using aqueous extract obtained from Inflorescence and Pollen grains of Casuarina equisetifolia showed a positive effect against Paracetamol (2g/kg). The biochemical parameters namely SGOT, SGPT, ALP and Serum Bilirubin were estimated after an 18th hr or 24th hr fast following the last dose. These biochemical restorations may be due to the inhibitory effect on cytochrome P450 or / and promotion of its glucuronidation. However, the severity of hepatic damage was decreased in animals treated with aqueous extract of plant materials (250mg/kg and 500mg/kg) and it is comparable with the standard drug silymarin (25mg/kg).

ACKNOWLEDGEMENT: The authors are thankful to our Friends and Faculty of Shri Vishnu College of Pharmacy, Bhimavaram, Andhra Pradesh, India for providing helpful critique and suggestions.

CONFLICT OF INTEREST: Authors have declared that no conflict of interests exists.