ABSTRACT: Chenopodium album Linn. is a plant that has a long history of uses in liver disorders. This study was done to evaluate the hepatoprotective effects of methanolic extract of Chenopodium album leaves on paracetamol-induced hepatotoxicity in albino rats. The hepatoprotective effect was evaluated on the basis of liver function parameters viz. Serum glutamic oxaloacetic transaminase (SGOT), Serum glutamic pyruvic transaminase (SGPT), Alkaline Phosphatase (ALP), Direct Bilirubin (DBIL), Total Bilirubin (TBIL) and Albumin (ALB) in serum of different groups of rats followed by histopathological study. In the present study, biochemical analysis suggested that acute administration of paracetamol-induced significant hepatotoxicity in experimental rats, which was evidenced by a significant increase in SGOT, SGPT, serum bilirubin, and serum alkaline phosphatase, while there was a decrease in serum albumin level. Treatment with C. album leaf extract has shown a marked reduction in SGOT, SGPT, serum bilirubin, and serum alkaline phosphatase, while there was an increase in the serum albumin level. The results of the present study revealed that the methanolic leaf extract of Chenopodium album Linn. is hepatoprotective against paracetamol-induced toxicity. This hepatoprotective activity has also been confirmed by histopathological studies on the liver conducted during the study.

INTRODUCTION: The liver is a vital organ that has a major role in the regulation of the physiological processes in the body. It plays an important role in the metabolism and clearance of most chemicals and toxins. Hepatotoxicity or liver dysfunction is a major health problem in the society that challenges not only health care professionals or physicians but also the pharmaceutical industry and drug regulatory agencies of the world. Prolonged exposure to certain pollutants, long term drug therapy, excessive use of some of the commonly used medicines like paracetamol, diclofenac, etc., alcoholism, and certain disease state have been reported to affect liver functioning.

The major clinical manifestation of liver disorder is jaundice 1. Treatment of common liver diseases such as cirrhosis, fatty liver, and chronic hepatitis are uncertain. Several synthetic antioxidants like butylated hydroxyanisole and butylated hydroxytoluene 1 and also conventional drugs like corticosteroids, antiviral and immunosuppressants are available for treatment, but are quite unsafe and may lead to serious adverse effects 2. Therefore, it is essential to search for alternative drugs for the treatment of liver diseases to replace conventional drugs 2. Ayurveda recommended a number of medicinal preparations for the treatment of liver disorders based on indigenous plants and their extracts 3. Natural remedies from medicinal plants are considered to be efficient and secure alternative treatments for hepatotoxicity.

In recent years, a number of plants have been shown to possess hepatoprotective property by improving antioxidant status but absence of detailed and systematic scientific studies for scientific validation of their therapeutic potential remains a major area of concern for their acceptance by pharmaceutical industries 4. Therefore, the present study has been carried out to evaluate the hepatoprotective activity of Chenopodium album leaf extract against paracetamol-induced hepatotoxicity in rats.

Traditionally, it is used as a curative medicine for various diseases, including hepatic ailments 6-7. It has been estimated that the plant mainly contains phytochemicals like alkaloids, saponins, total flavonoids, and total phenolics 8. Many extracts and compounds from C. album leaves have been demonstrated to possess hypotensive, anti-inflammatory, anti-helminthic, and anti-cancer activities 9. The pharmacological studies reported by Agrawal et al., confirm the therapeutic value of Chenopodium album 10.

Further, it also has a significant antifungal potential against Ascochyta rabiei, a phytopathogenic fungus 11. Therefore, the present investigation was undertaken to determine the hepatoprotective effect of C. album leaves extract against paracetamol-induced hepatotoxicity in rats.

Collection of the Plant Material: The plant C. album was collected from the local area of Guwahati, Assam (India) and was authenticated (Ref. no. BSI/ ERC/ Tech/ 2019/ 887) in Botanical Survey of India, Eastern Regional Centre, Shillong, Meghalaya.

Preparation of Methanolic Extract: The leaves of the plant were separated and washed carefully with water and were allowed to shadow dry at room temperature. The dried leaves were then grinded using a mechanical grinder into a coarse powder. The powders were stored in an airtight container and kept in a cool, dark, and dry place until analysis commenced.

About 80 g of powdered material was taken in a clean, flat-bottomed glass container and soaked in 400 ml of methanol. The container with its contents was sealed and kept for a period of 7 days, accompanying occasional shaking and stirring. Then, it was filtered through Whatman filter paper. The filtrates so obtained were allowed to evaporate under normal temperature. Gummy concentrate of greenish color was obtained, which was designated as methanol extract of C. album, dried in a vacuum evaporator, and stored at 4 °C until further investigation 12.

Experimental Animals: For conducting the experiment, Wistar albino rats (150-200 g) were obtained from the College of Veterinary Science, Khanapara, Assam (India). The animals were maintained under standard laboratory conditions of temperature (25 ± 2 °C) and humidity (55 ± 5%) with a 12-h light/dark cycle.

All the animals were fed with a commercial pellet diet, and water was provided ad libitum throughout the course of study. For induction of hepatic injury, paracetamol was obtained from a local pharmacy of Guwahati, Assam (India).

Permission for conducting the experiment was obtained from the Institutional Animal Ethical Committee, Gauhati University, Assam (Ref: IAEC/Per/2018/PP-IAEC/2018-49), and was in accordance with the guidelines of the Committee for the Purpose of Control and Supervision of Experiments on Animals (CPCSEA).

Evaluation of Hepatoprotective Activity: To evaluate the hepatoprotective activity of the leaf extract of C. album, the rats were divided into the following groups, each containing 5 rats (n=5):

Group I: Rats in this group were fed a normal diet and water for 14 days.

Group II: Rats in this group were given paracetamol at a dose of 500 mg/kg body weight/ day for 14 days.

After the treatment period was over, the rats were killed using chloroform, and blood samples from each animal of all the groups were collected and centrifuged at 5000 rpm for 10 min. The serum obtained was used for the estimation of Serum glutamic oxaloacetic transaminase (SGOT) [by modified IFCC method] 13-15, Serum glutamic pyruvic transaminase  (SGPT) [by using UV Kinetic (IFCC) method without Pyridoxal Phosphate (P-5´-P)] 13-16, Alkaline Phosphatase (ALP) [by using Modified Kind and King’s method] 17, Albumin (ALB) [by using BCG method] 18, Total bilirubin (TBIL) and Direct bilirubin (DBIL) [by using Jendrassik and Grof’s method, 1938] 19.

Histopathological Studies: For histopathological study, the liver was removed and washed by normal saline, blotted with filter paper and weighed immediately. It was then cut into small pieces and were preserved in 10% formalin for proper fixation for 24 h followed by acetone dehydration and clearing by xylene. The tissues were processed and embedded in paraffin wax. Sections of 5 microns in thickness were cut and stained with hematoxylin and eosin following the standard microtechnique 20. Mounted slides were examined under the microscope for analyzing the histopathological changes in the liver, and their micrographs were taken.

Statistical Analysis: The results were expressed as mean ± standard error mean (S.E.M), and the values were calculated for each group. Statistical analysis was performed by using the student’s “t” test. The minimum level of significance was set of P < 0.05.

Biochemical Analysis: Biochemical reports suggested that paracetamol administration induced significant hepatotoxicity in experimental rats, which was evidenced by the significant increase in SGOT, SGPT, serum bilirubin, and serum alkaline phosphatase, while there was a decrease in serum albumin level as compared to the control group. This indicates liver toxicity in the paracetamol-induced rats. The methanolic extract of C. album leaves at 300 mg/kg body weight/day (Groups III and IV) exhibited a statistically significant reduction in the elevated levels of the enzyme SGOT, SGPT, ALP along with DBIL and TBIL content when compared to paracetamol treated group. A comparable increase in the level of ALB was observed in extract-treated groups at a dose of 300 mg/kg body weight/day with respect to the paracetamol treated group. The results are summarized in Table 1.

Histopathological Analysis: Histopathological analysis showed that in the rats of the control group, the liver architecture was normal with distinct hepatic cells and well-preserved cytoplasm. The hepatocytes were hexagonal in shape, having nucleus at the center. The central vein and sinusoidal spaces are clearly visible in Plate 1. The liver dissected from paracetamol treated rats showed loss of cytoplasmic membrane in hepatocytes for which the cell contour is not maintained. Focal necrosis and fatty degeneration were observed, and nuclear degenerations like pyknosis and karyorrhexis were evident in hepatocytes Plate 2. In the rats treated simultaneously with paracetamol and leaf extract of C. album showed less damage. Nuclear as well as cytoplasmic changes were visible but of lesser degree, and also sinusoidal congestion was very less or absent. Moreover, regenerating hepatocytes were observed, and number of Kupffer cells was very less Plate 3. In the rats treated with the leaf extract from 15th day onwards, which were initially treated with paracetamol, the liver appeared almost normal. Vascular changes were minimum and cytoplasmic, and nuclear changes were also of lesser degree Plate 4. These changes in the liver architecture coincided with the corresponding changes in the enzyme levels, and hence the hepatoprotective effect of C. album leaves extract was confirmed. 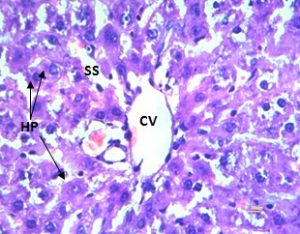 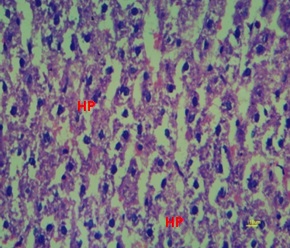 DISCUSSION: Hepatotoxicity implies chemical driven liver damage. Drug-induced liver injury is a cause of acute and chronic liver disease. Paracetamol overdose is one of the leading causes of liver failure. As the disease progresses, signs of liver failure may develop, which includes low blood sugar, low blood pH, easy bleeding, and hepatic encephalopathy. Since the changes associated with paracetamol-induced liver damage are similar to that of acute viral hepatitis 21 therefore, in the present study, paracetamol was selected as a hepatotoxicant to induce liver damage.

In the present study, it was found that paracetamol toxicity results from the formation of an intermediate reactive metabolite N-acetyl-p-benzo-quinone imine (NAPBQI) which binds covalently to cellular proteins causing cell death. NAPBQI depletes the liver’s natural antioxidant glutathione and directly damages liver cells. Acute hepatic necrosis leads to a marked elevation in serum liver enzymes that leak from the liver into the bloodstream 22. The increased levels of SGOT, SGPT, ALP, DBIL, and TBIL and decreased in the level of ALB upon induction of paracetamol indicated considerable hepatic injury in the present study.

The primary objective of this study was to assess the hepatoprotective activity of C. album against chronic liver damage. In this case, paracetamol-induced liver necrosis was inhibited significantly by C. album leaf extract, and therefore these extracts deserve credit for giving protection to the liver. The proposed reasons behind the protection is may be due to the GSH preservation or replenishment and antioxidant properties of this leaf extract. Similar findings were also reported by Jain and Singhai (2012) 23. The elevated levels of SGOT, SGPT, ALP, DBIL, and TBIL were significantly reduced while the decreased level of ALB was significantly increased by the treatment with methanolic extract of C. album leaves in the present study. Also, the histopathological alterations produced by paracetamol in the liver tissue were reversed significantly by the treatment with extracts of C. album leaves.

CONCLUSION: In conclusion, the result of the present study clearly demonstrates that alterations produced by the administration of paracetamol in the various biochemical parameters viz. SGOT, SGPT, ALP, DBIL, TBIL, and ALB were reversed significantly by the treatment with extracts of C. album leaves. The results were also supported by histopathological studies of rat liver as evident from the regeneration of hepatocytes upon treatment with C. album leaf extract.

ACKNOWLEDGEMENT: Authors are grateful to the Institutional Biotech Hub of B. Borooah College, Guwahati, Assam, for providing necessary instrumental facilities for conducting the study. Sincere thanks to Dr. Debesh Pathak and Dr. Sahidul Islam of College of Veterinary Science, Khanapara, Guwahati, Assam for their help on the microscopic work and histological studies.

CONFLICTS OF INTEREST: We declare no conflicts of interest.